Minato Namikaze, also known as The Fourth Hokage,  played many roles in the anime, Naruto Shippuden. Besides being a former leader of Konoha, he was a father, a teacher, and a deadly, lightning fast shinobi in the entire anime — earning him the title of Konoha’s Yellow Flash.

He wasn’t there during Naruto’s childhood, but during his lifetime, he made significant differences that made an impact to the anime’s main protagonist as well as to those that surrounded and went up against him. Later in the anime, he will have multiple chances to reunite with Uzumaki Naruto to change the tides of battle.

Bandai did not let the opportunity pass and came up with a collection that definitely had collectors waiting back in 2010. The Kenran Emaki collection boasts its figures of Sage Naruto together with distinguished characters from Naruto Shippuden — including the aforementioned Minato Namikaze.

The Kenran Emaki collection can be pretty old, but if you’re looking to complete a set of Naruto figures, then you’ll be digging the web for these stuff. However, you have to be careful as bootleggers haven’t stopped their production of their unreliable toys even though they’re copying it from old designs. As long as it’ll fill their bank accounts with dirty cash, then they wouldn’t mind deceiving Naruto fans into buying their dirt cheap products.

AliExpress should be crossed out from your options if you’re going to buy authentic figures. The website is just teeming with bootlegs that you wouldn’t even dare type the word ‘Ali’ on your browser. Sad to say, there could be little hope to save the site from such items as it’s already out of control since even the website itself is posting the ‘bads’ on their front page.

Many people are cleverly business-minded, however, some are too focused on generating money that they forget proper ethics. You shouldn’t be selling another person’s idea or creations without their permission, and especially when you don’t have any rights to do so. It’s mandated in law in most parts of the world. Despite that being common sense, these figure pirates are still boldly breaking the law — XIES Toy Store being one of the culprits.

Bootlegs are produced in many countries but if we’re talking about toy figures, then China is possibly on the top of the list. A lot of Japanese figure brands have their production based in the country since it’s the most cost-effective way. It also means that they are prone to such piracy and for that reason, many bootleg figures come from China which is then distributed globally. This is terrifying indeed as you could become a victim of these devious pirates.

By simply getting know what to look out for, you’ll be able to avoid bootleg figures. This fake Kenran Emaki Minato figure would surely help you in identifying bootlegs!

Authentic figures often, if not always, come with a sturdy packaging of its own. This is to ensure that the item is sealed and protected from damages. Aside from that, a proper packaging labels a true figure of its authenticity — however for this fake Kenran Emaki Minato Namikaze figure, even a generic cardboard packaging is totally ignored. Close up on the fake figure in plastic 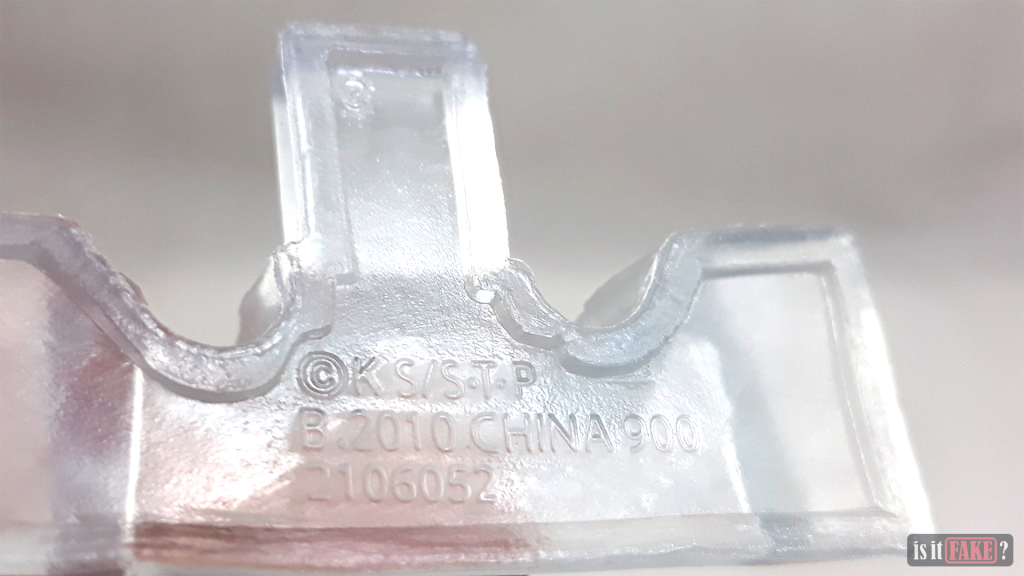 Close up on the fake base's imprint

As for the bootleg figure, it’s only wrapped in disposable plastic. It also looks like that it would tear from just a slight mishandling. Considering that the fake Minato Namikaze figure has a sharp kunai, the plastic might as well be torn to bits. Although, this fake sure knows how to compensate and still provided the figure with a plastic stand.

The real Kenran Emaki Minato Namikaze definitely has a box, and it should look like the photos down below. Looking at the real figure’s packaging, the front showcases Minato plus a silhouette art. There are certain details to watch out for when looking for the real Kenran Emaki figures. The Bandai logo will be found at the bottom right while the Naruto Shippuden logo is found opposite of the manufacturer’s logo. 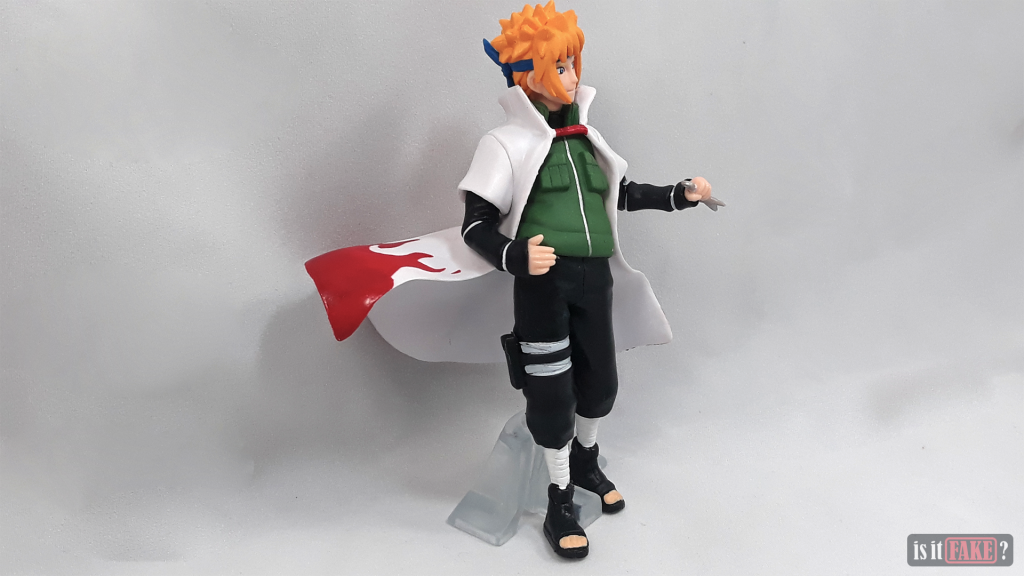 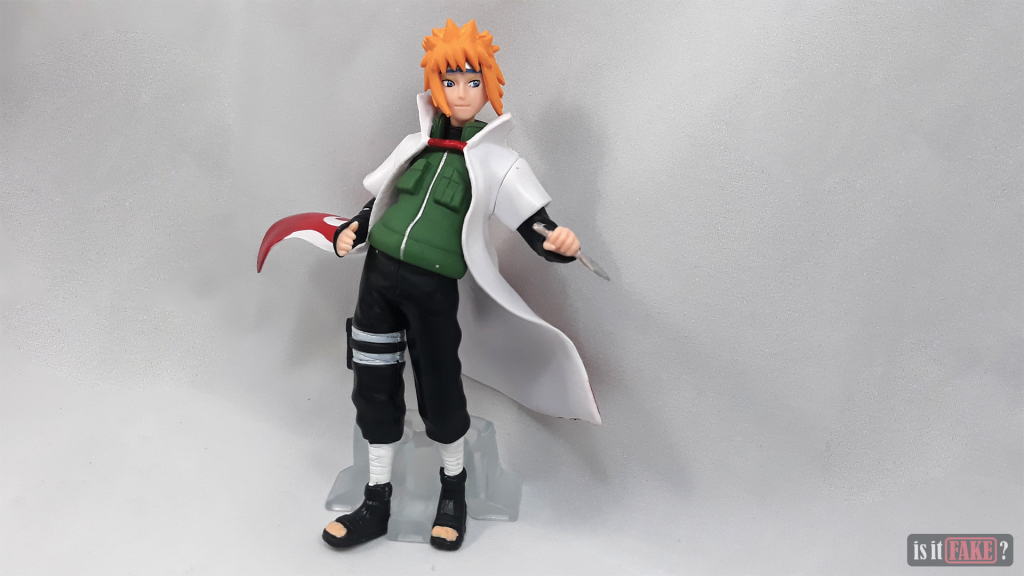 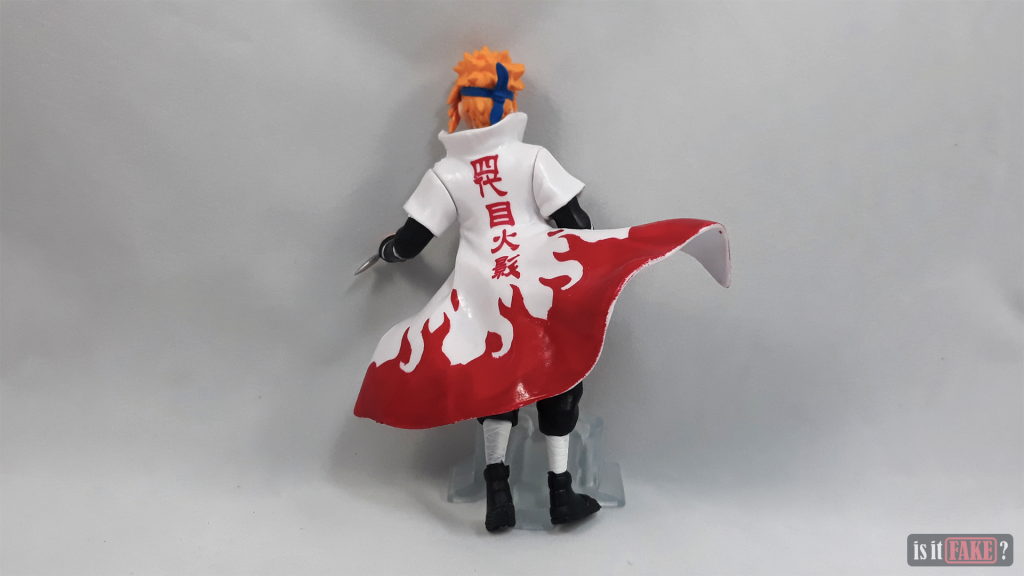 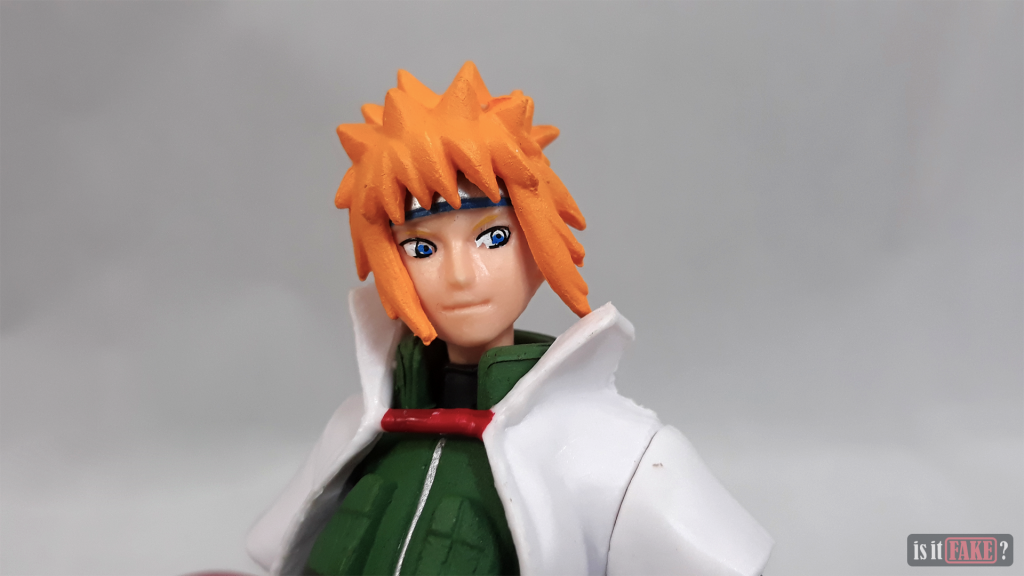 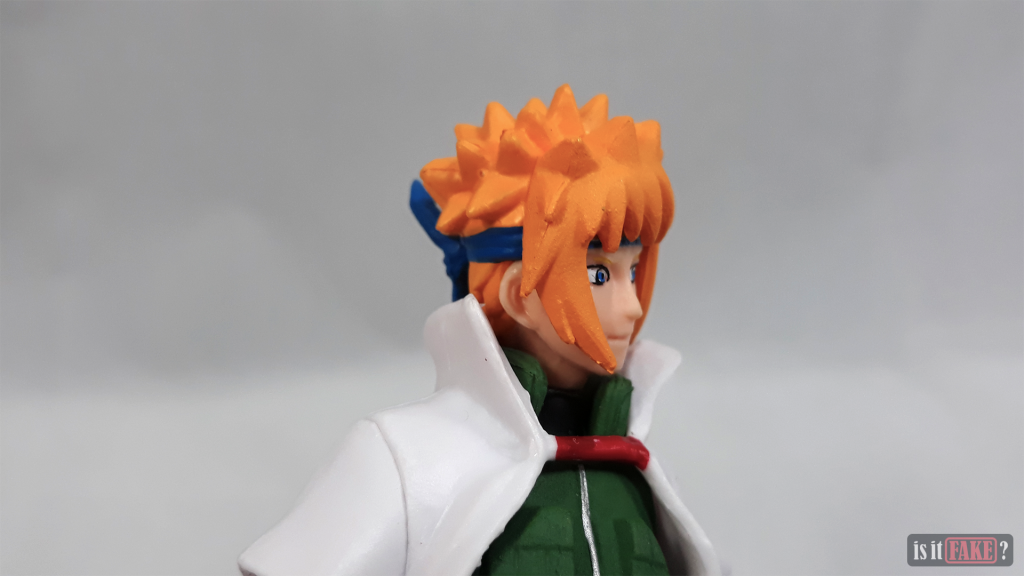 Side angle of the fake figure's head Side angle of the fake figure's head

Over head view of the fake figure

Although we won’t be able to diss much about the fake figure’s packaging, the fake Kenran Emaki Minato Namikaze figure is so bad that it reeks of odd and harmful smell. With a 360 degree view of it, you’ll already spot all of its visible flaws. Fake figures are often prone to mishaps and defects and this bootleg is no different.

Starting from its face, you’ll already notice its careless paint job. The paint on its eyes did not shoot right as the blue paint overlaps. The right eye also looks freakish with a scratch, and covered by the angle are dents and excess plastic bits on its front hair. The face totally looks undefined as the brows also lack color while the mouth is barely noticeable.

A view from over its head can give you more hints of its defects as there are a lot of unpainted spot that give the figure an undesirable impression. 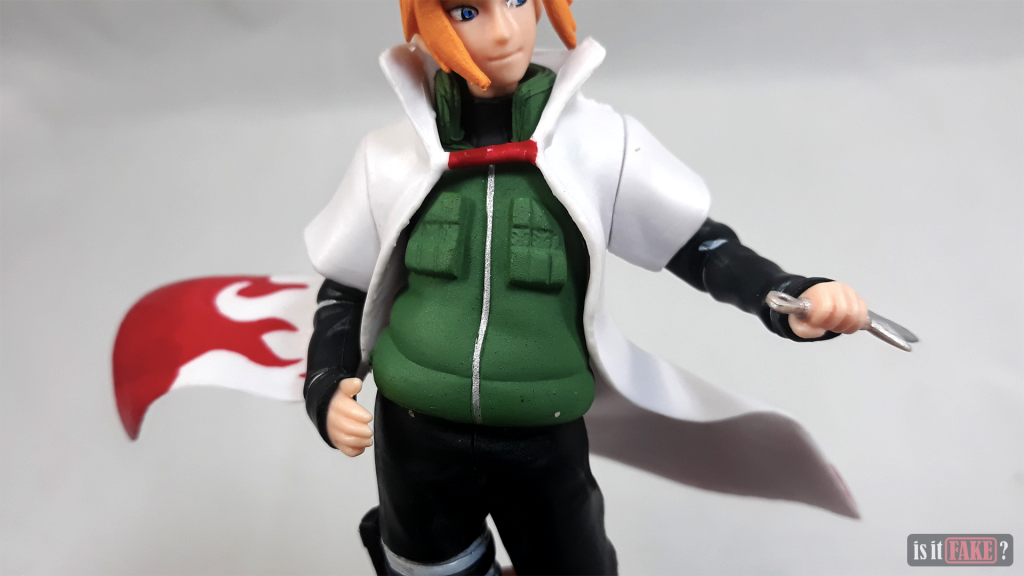 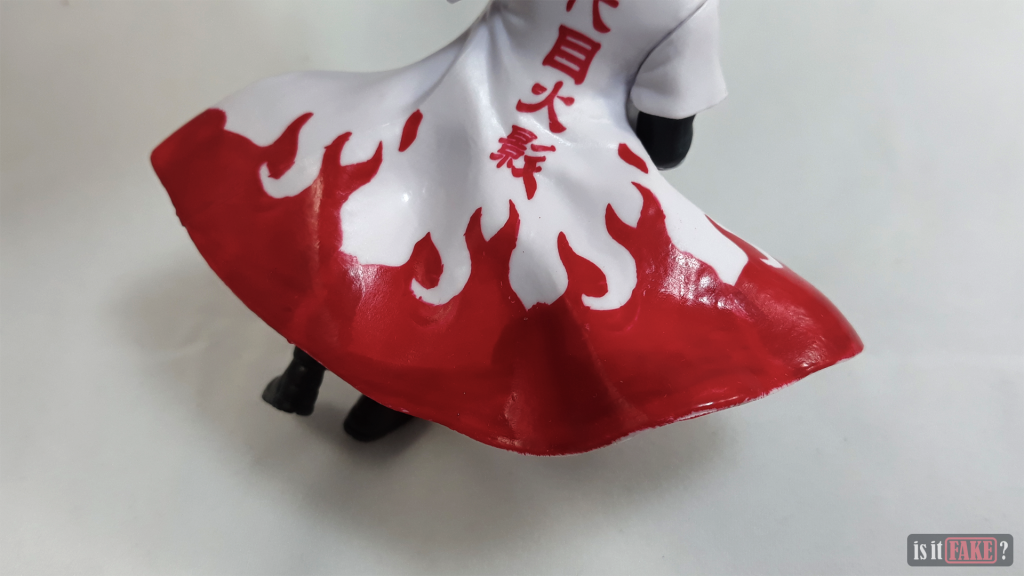 Going a little bit below, the upper body portion of the figure isn’t something to be proud of. You’ll first notice that the paint on its cloak looks inaccurate with a touch of blood red. The edges of the fire are just ragged and totally unbecoming of the Konoha’s Yellow Flash. On top of that, more dents are visible on its shoulder area.

Overall, the upper body seems like it was sculpted carelessly. The edges of the fake figure are rough and filled with excess bits of the material. It could’ve used some polishing if it would really want to trick a lot of fans, but that advice is long overdue — the fake figure already failed the moment we saw its packaging. Aside from that, the whole upper part wiggles as if it will break down any moment if it snaps. Incompatibility of the base Zooming in on the fake figure's toes

While the bootleg has an odd smooth texture, there’s no denying that it’s full of deficiency. It lacks polishing, it lacks accuracy, and most importantly, it lacks proper paint job. The ruined appearance that’s bestowed on this figure says that the makers aren’t too motivated on earning their dirty cash.

This fake figure really has an inconsistent paint job. On one part, it’s filled with burning colours, but on the other, the paint is just fading away. To be specific, the areas that are painted in white.

If we’re going to talk about proper figure carving, then you wouldn’t want to look at its feet because they’re probably going to look irritating. The details are just off the mark, and top it off with a few more inaccurate painting, then you have yourself an awful bootleg. The real and authentic Kenran Emaki Minato Namikaze figure may be nowhere near as perfect, but it’s definitely a great addition to your Fourth Hokage figure collection. The real figure still looks flawlessly stunning considering it’s an old design. Plus, you wouldn’t have to worry about damages as it has passed absolute in Bandai’s quality control.

Side by side, the real figure just outshines the bootleg with its color depth, and spot-on paint job. The details are on point if we’re talking about accuracy. There are no undesirable features to be found on the authentic figure.

The price of the fake may sound funny and look expensive, but it’s the reality. The fake Kenran Emaki Minato Namikaze figure that we bought actually requires the whole set of the bootleg itself — can you believe that? Yes, you need to get all of the five FAKE figures for $12.42 to get the Minato Namikaze figure.

The real figure, on the other hand, started at around $4.40 when it first came out in 2010. The supply of the specific figure obviously declined through the years, raising the price up to $9 for a used figure. For a brand new figure, however, there could be no hope of obtaining the Kenran Emaki Minato Namikaze figure online.

Although, there’s a recent release of the so-called Yellow Flash.

As we’ve mentioned, the Kenran Emaki Minato Namikaze figure by Bandai was released last 2010. Bearing that in mind, the real figure could already be sold out, however, some websites claim that they still have a pre-loved figure in stock — which is completely unreliable.

If you’re going to splurge on a quality figure, then why not get yourself with one that’s worth collecting.

The Figuarts ZERO Minato Namikaze -Kurama- by Bandai would probably blow your minds as the Yellow Flash fuses with Kurama projecting a fiery look at the legendary character. The figure was just released last February 2019 and belongs with Naruto in the same Kizuna Relation series. So if you’re also looking to buy a Naruto figure, then this will be the right opportunity to collect both.

The Minato Namikaze -Kurama- figure is available at Amiami for around $63 which sounds reasonable considering that the design is quite massive and well-detailed. Aside from that, it pledges an absolute guarantee to quality from its manufacturer, Bandai.

The fake Minato Namikaze figure is has so many flaws that you wouldn’t even bother to touch it. For a really old design, it’s a shame that bootleggers didn’t bother to let this one go and made an abomination out of it.

The fake figure isn’t cut out for its messy paint job and nasty scratches. Its absence of a proper packaging couldn’t protect the bootleg itself keeping in mind that the item is made from inferior materials — the cheap paint included. At the end of the day, you wouldn’t bother spending a penny, even at least for shipping, for this despicable figure.

Overall, the fake is inconsistent with its details which made it dig its own grave. For that reason, it deserves to be buried with an 85% horrible rating.