Styles aren’t new to the One Piece anime series as every arc, you’ll see the Straw Hat Pirates killing it with new outfits. Needless to say, it’s tiring to look at Luffy wearing his straw hat and tattered shirt throughout the thousand episodes the anime has. The best way to keep the fans tuning in is to style the characters up!

Banpresto has an affordable way of showing off the pirates of One Piece through their Suit and Dress collection. Did you even imagine seeing a formidable pirate crew dressed in formal clothing? Of course, not! The way this collection was created made it easy for fans to collect them all.

The Suit and Dress collection has 2 sets and a total of 8 figures in it — all Straw Hat members except for Brooke though! The anime figure collection was released back in 2013 anyway.

Unfortunately, the collection has been prone to piracy for many years now. The bootlegs are distributed worldwide and it’s been alarming figure enthusiasts.

It’s easy to say that AliExpress is a hive for bootleg figures. Obviously, the website hasn’t been regulating the initiative of sellers to market bootlegs. What matters to them is just the influx of cash.

This bootleg Suit and Dress: Luffy figure came from China and was shipped by the Dreamme Store — a figure vendor from AliExpress. From the mentioned parties, you can say that selling bootlegs is rampant in China because figure pirates are getting away with it easily. Many of the figure manufacturer’s factories are also located in the counter, making it easy for bootleggers to steal designs or recycle the rejected figures.

So if you want to protect yourself from cheap and low-quality bootlegs, it’s best to do your research as well. You can start by taking a look at this fake Suit and Dress: Luffy figure

Even a small figure has a box of its own, especially if it’s from a well-known brand like Banpresto. Apparently, this fake Suit and Dress: Luffy figure shows off its indecency by being wrapped in cheap plastic alone. 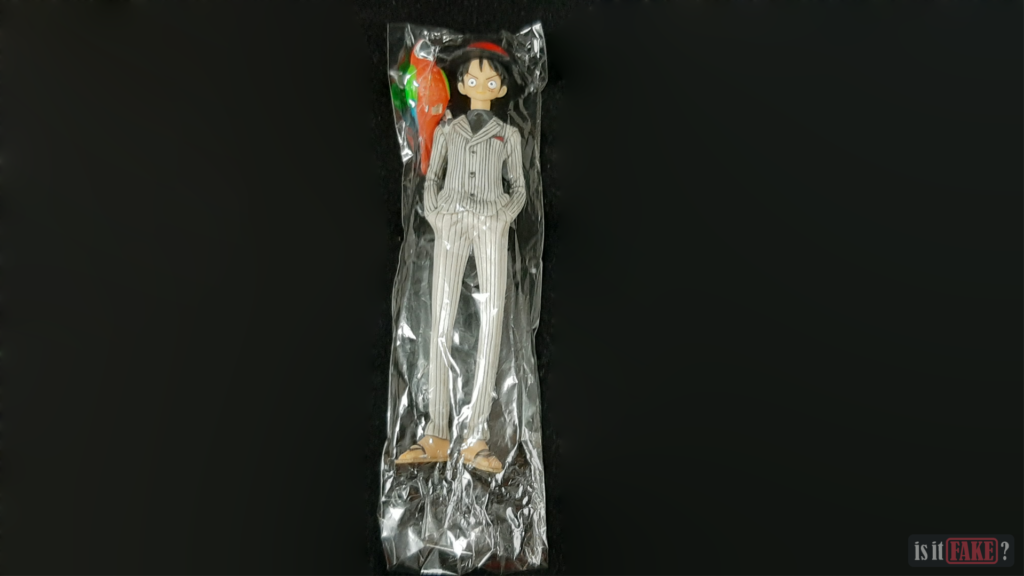 The fake Luffy figure - in plastic 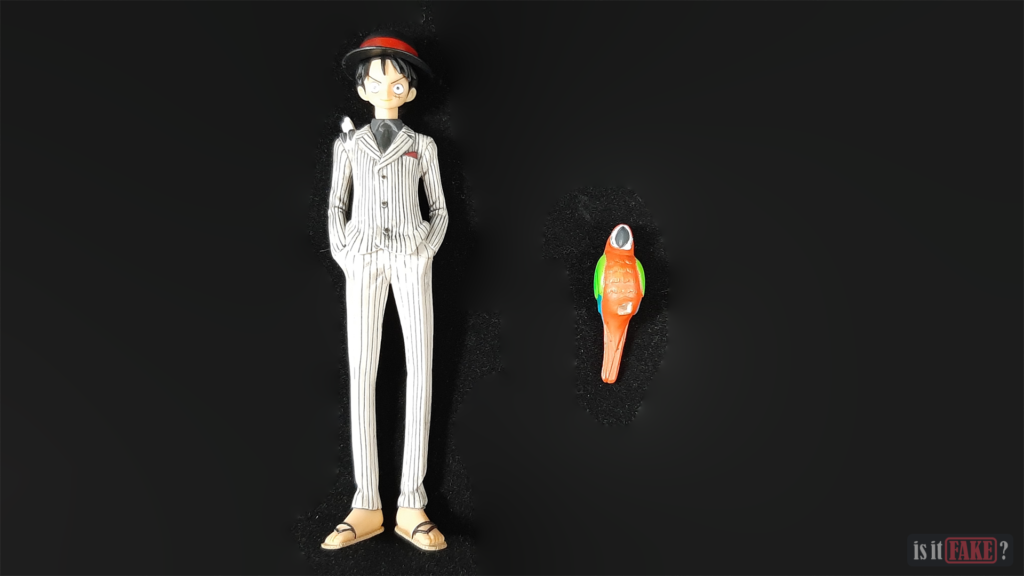 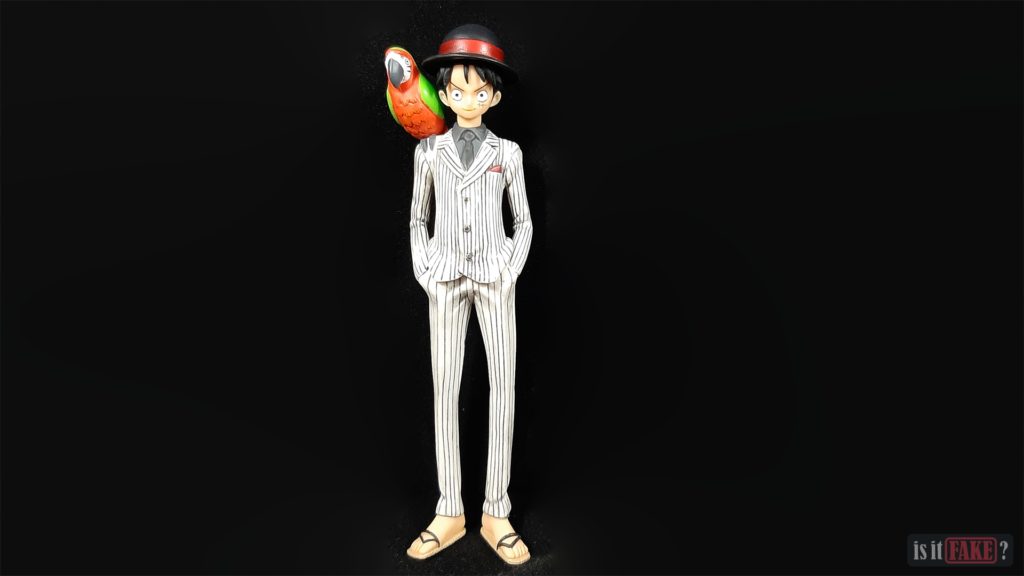 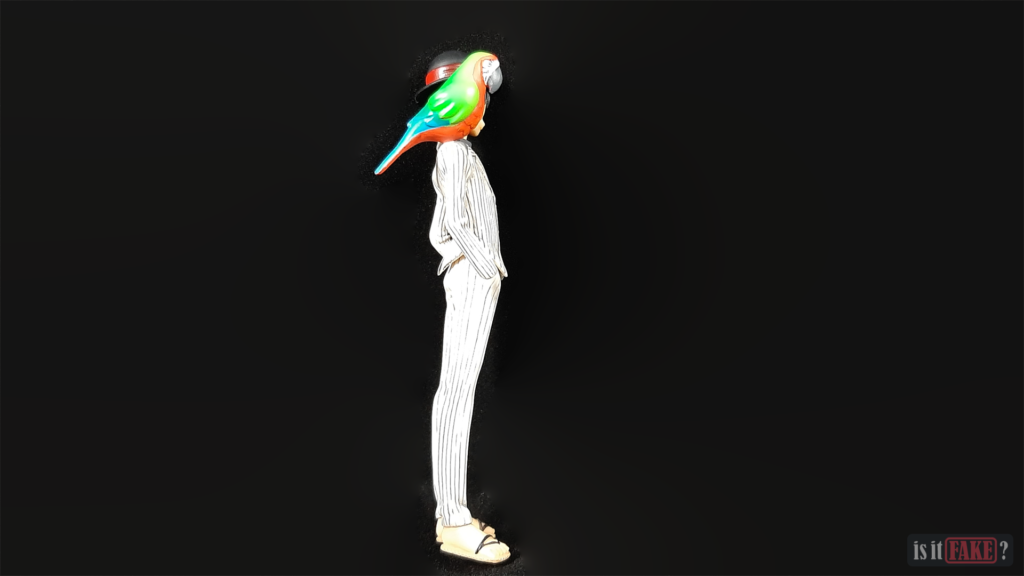 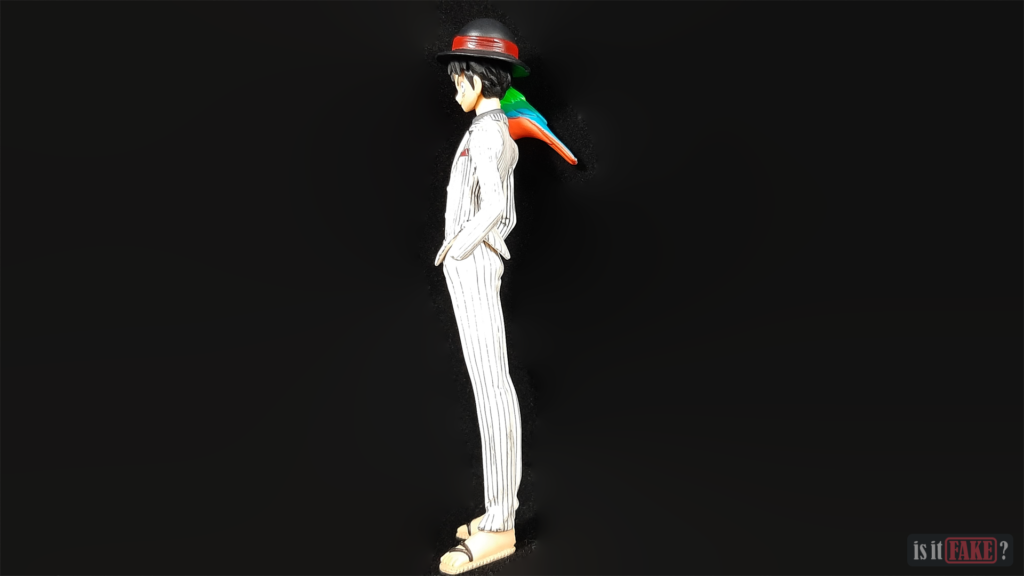 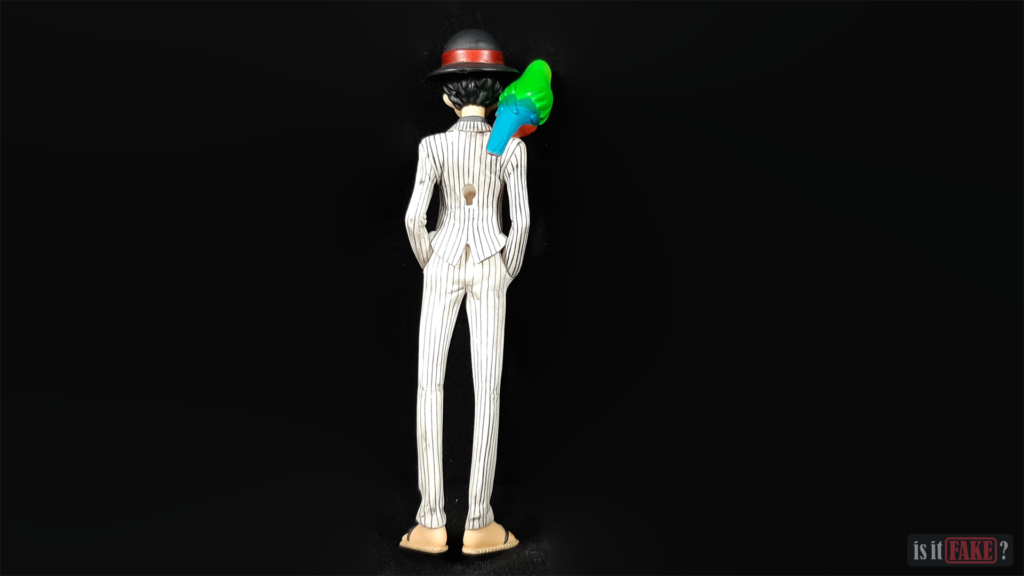 The fake Luffy figure - back 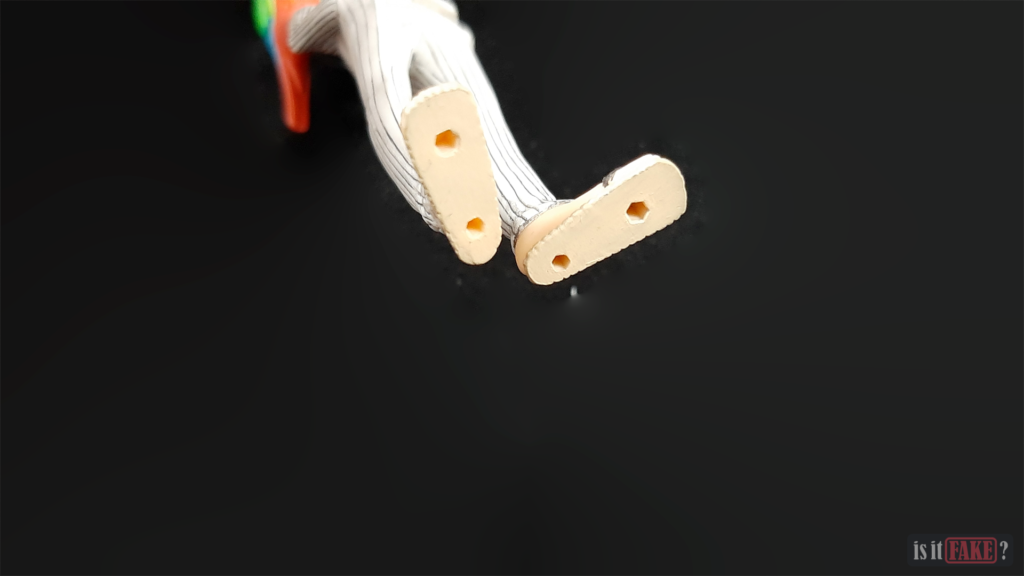 The soles of the bootleg

As you can see, the fake Luffy figure has its parrot accessory, however it’s missing a core necessity — which is the base!

Looking at the fake figure’s soles, you can see that there are holes on it making it obvious that there should be a base for this figure. With that flaw, you can already see a sign that the figure is a cheap bootleg.

The overall view at the figure also seems off. From a fair distance, you can tell that there are quite a handful of stains on the figure’s coat. The stripes look really messed up and that’s not surprising for a fake figure since the materials used on bootlegs are relatively cheap. 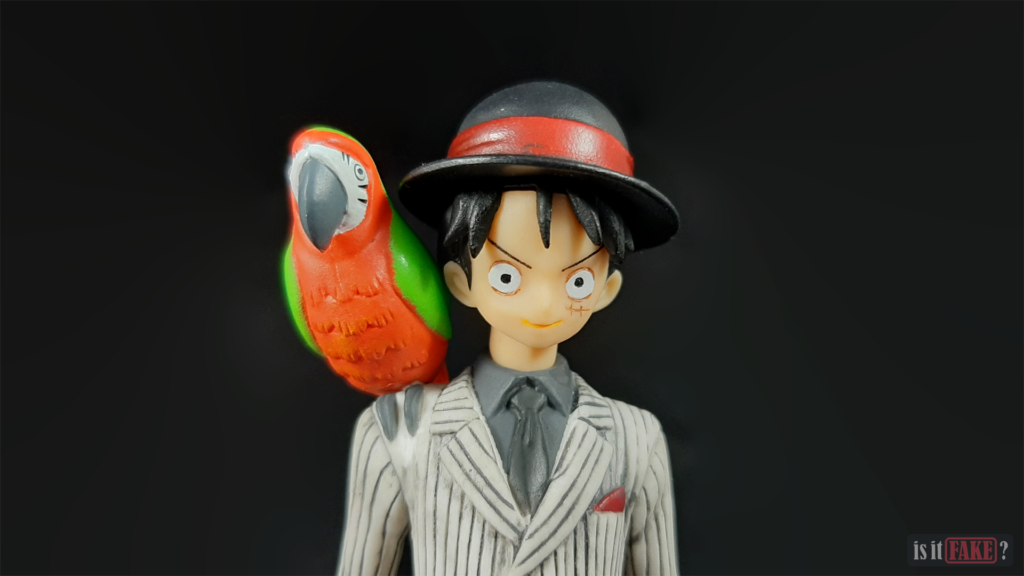 Close up of the fake figure's face 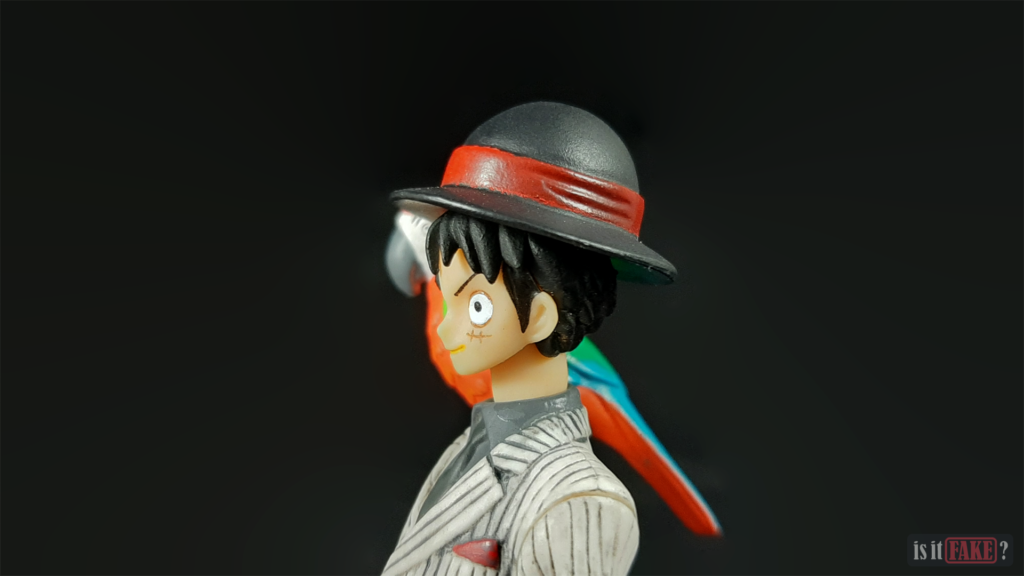 Close up of the fake figure's face - right side

Close up of the fake figure's face - back 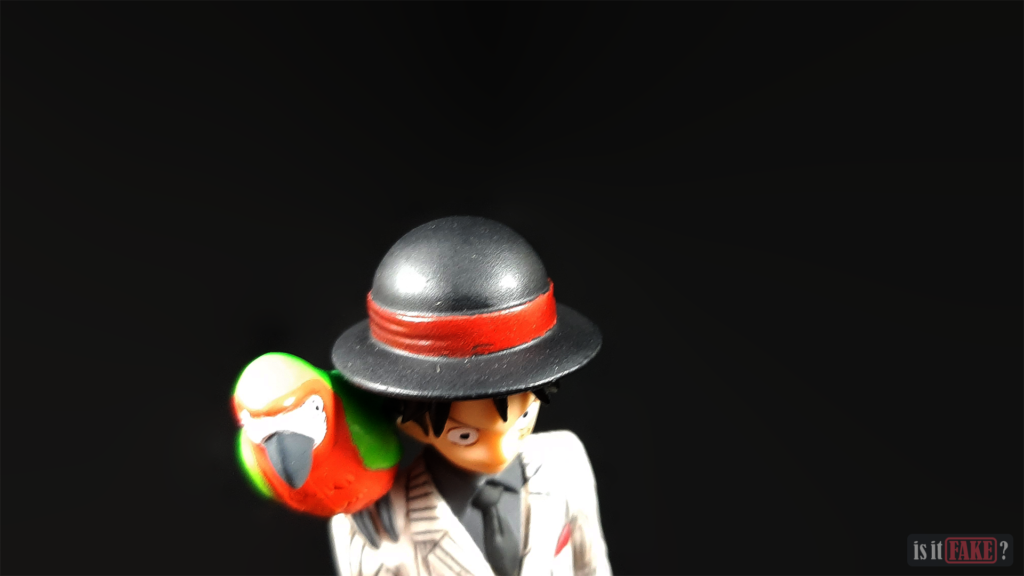 Close up on the hat 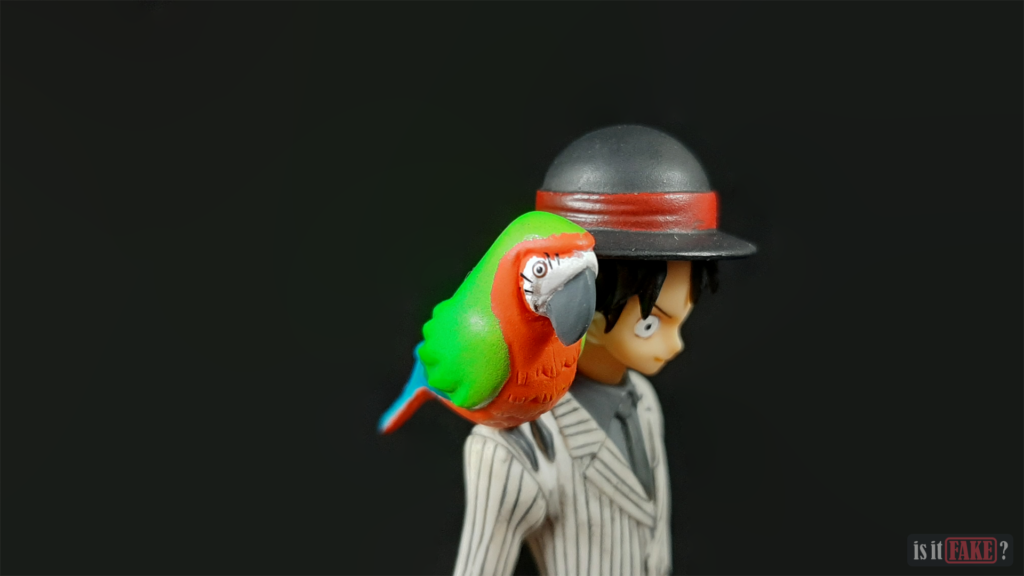 Close up on the parrot 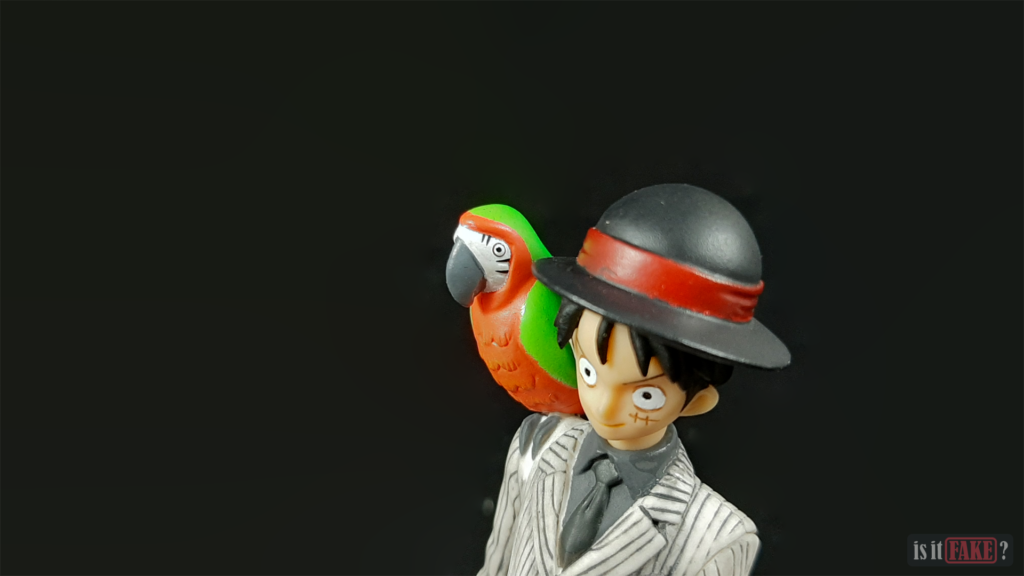 The parrot's right side of the face 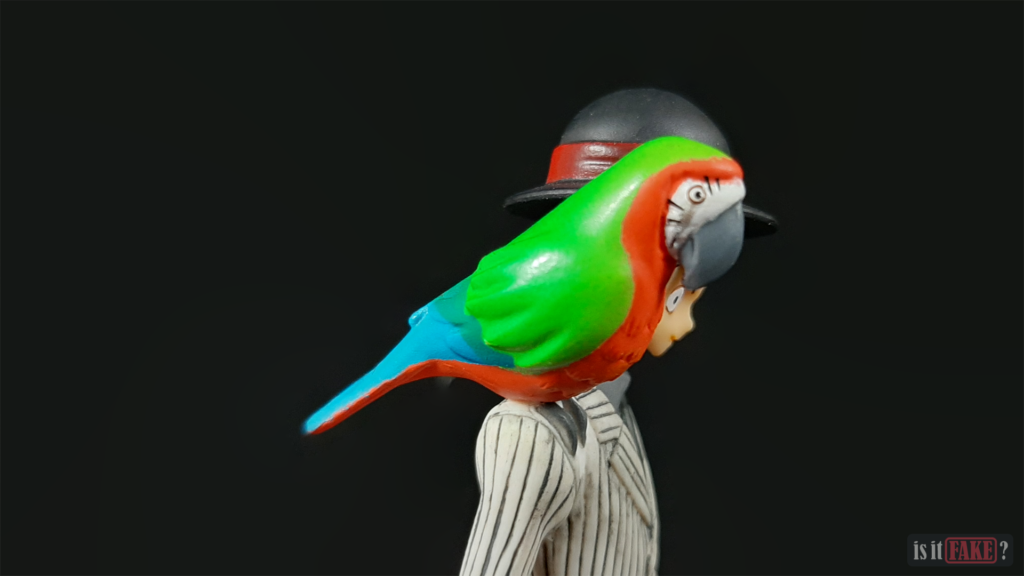 Close up on the parrot's body 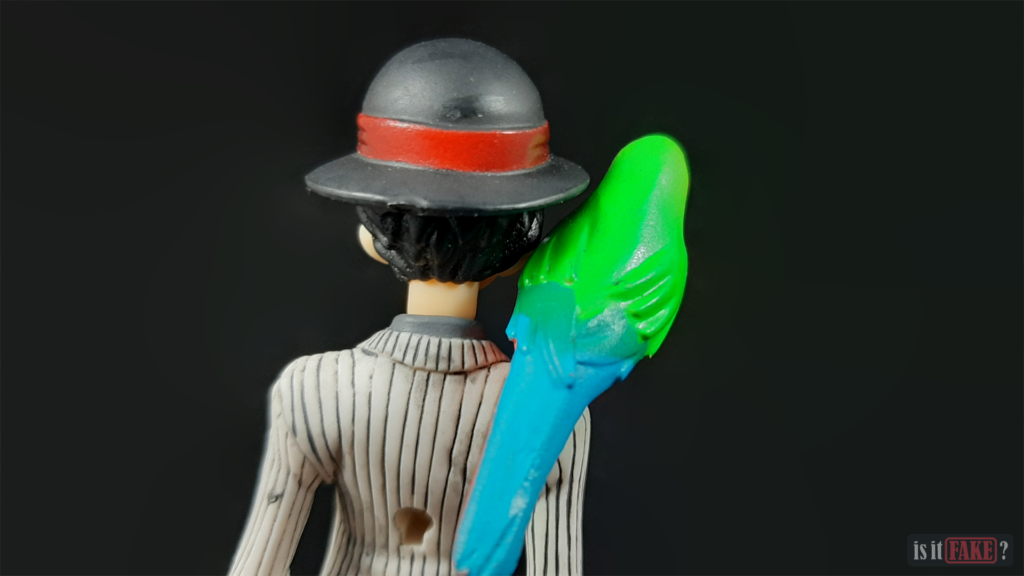 The back of the parrot

Starting off with the face, the eyes look like Luffy didn’t get enough sleep. You’ll notice the dark edges of the eyes have a dark shading. Although the face looks symmetrical, the lips look faded enough to be judged. The hair that’s lying off looks crude, and above that, the black hat shows off its faded red lining.

Now, let’s talk about the parrot. Do you find it weird that the parrot’s face looks oddly bent? Well, we do! The face of the talking pet is also smudged with black paint. And if you look closely, the parrot’s body has unrefined edges of green.

If you aren’t convinced yet, let’s head over to the fake figure’s body. 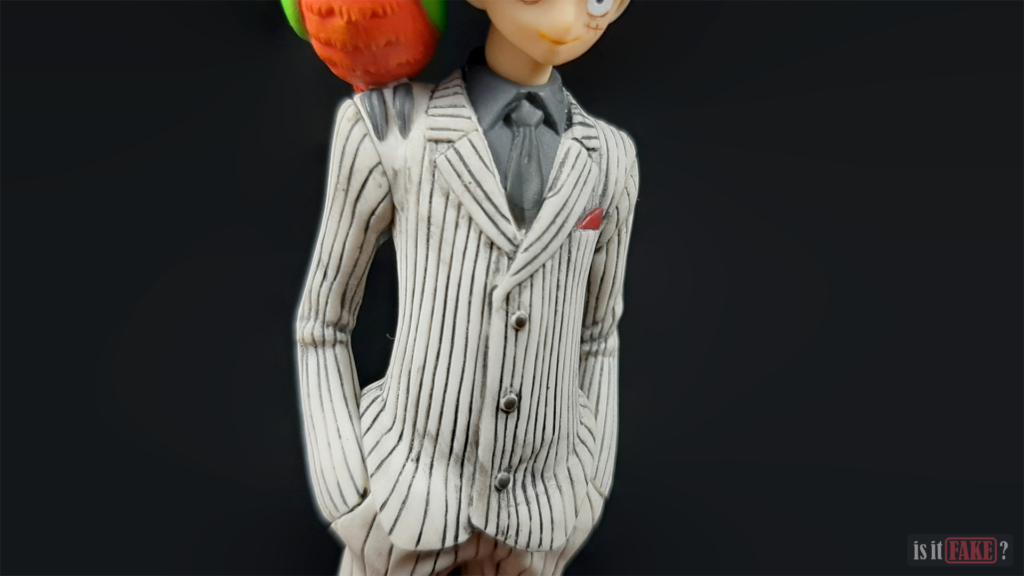 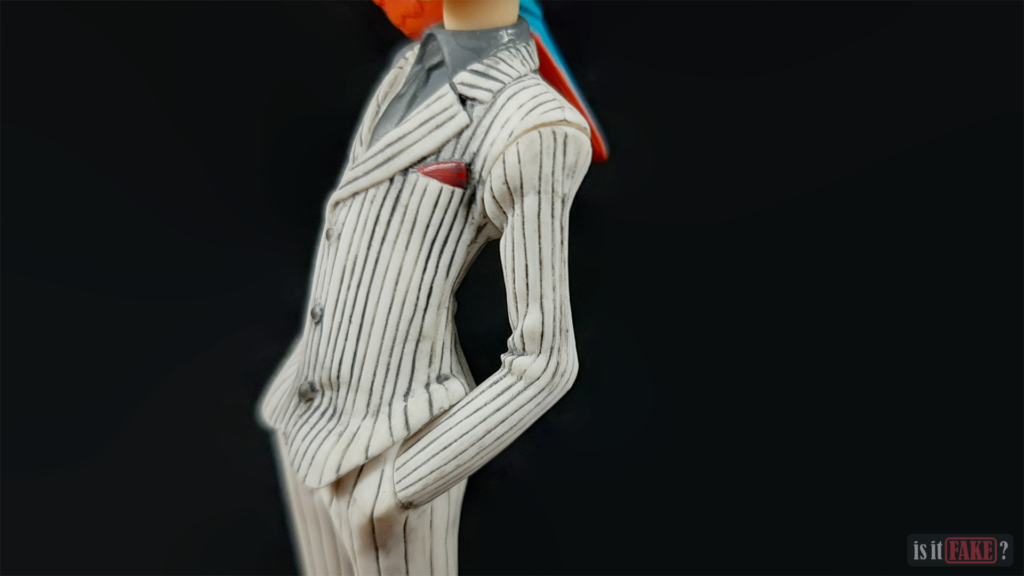 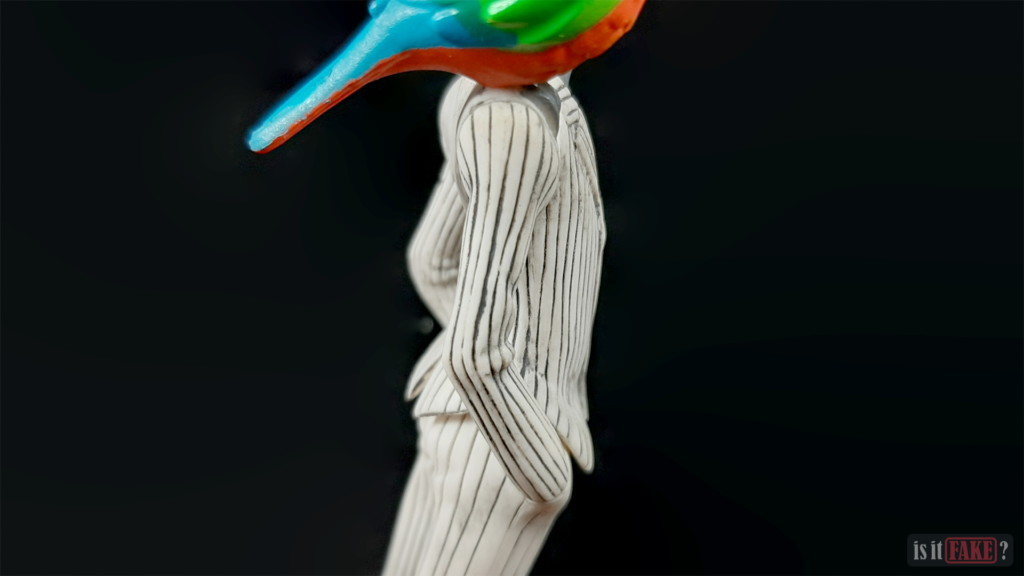 Close up on the left arm 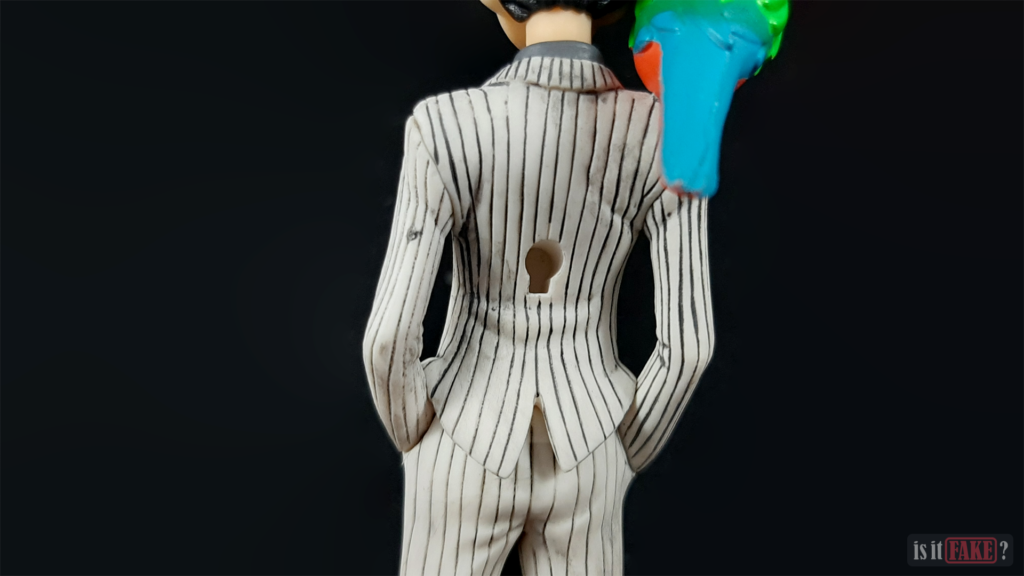 Back portion of the fake figure

The fake figure’s body is a complete mess. The buttons are inaccurately painted, the stripes are jagged and faded, not to mention that the paint from the stripes are all over the coat. And even if the stripes are supposed to be jagged, the whole area just doesn’t make up for it. It’s on another level of stained jackets.

Because of the stained coat the bootleg has, you can barely notice the inner portion of the suit. If you look closely though, you’ll notice that the tie isn’t as defined. 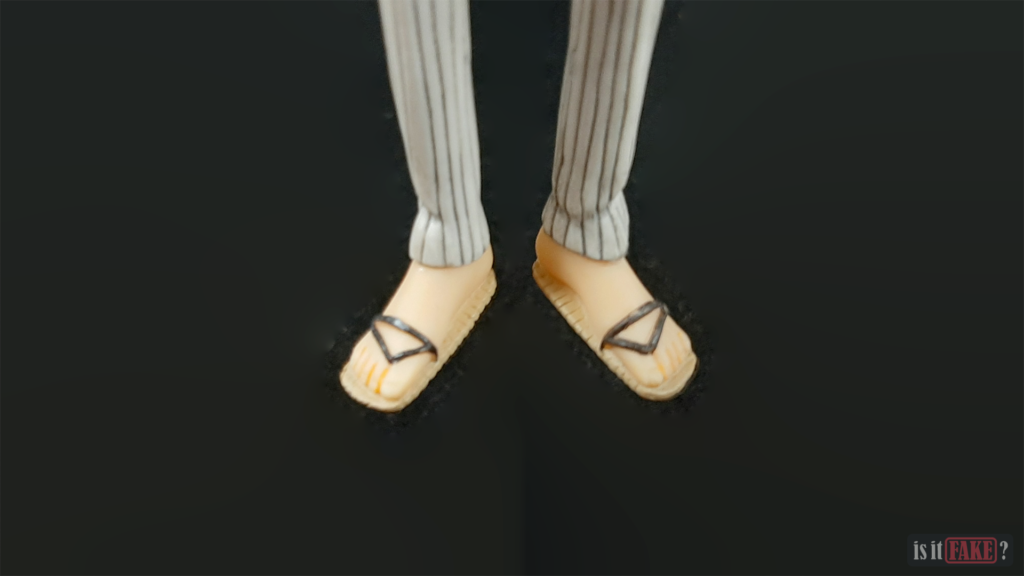 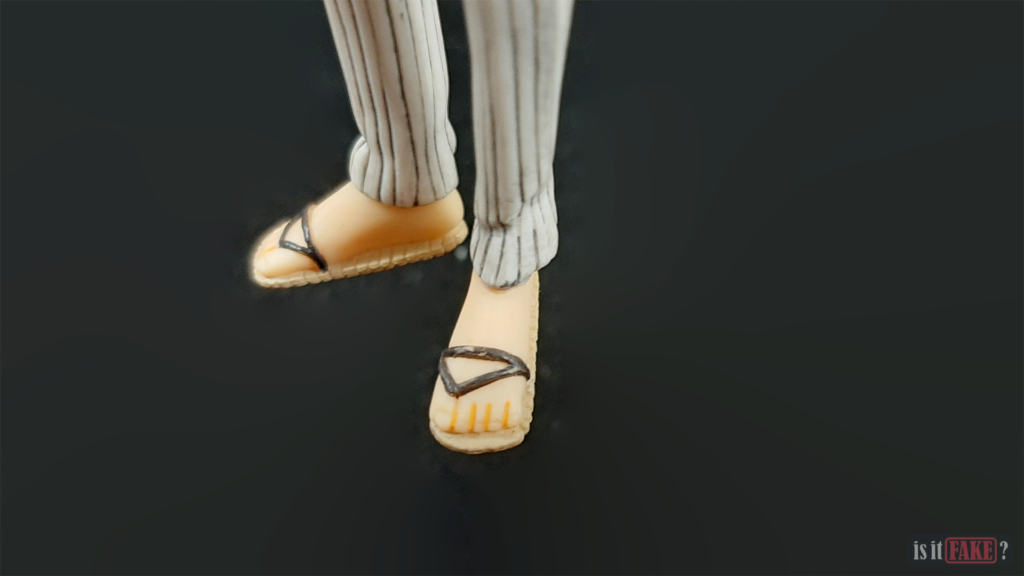 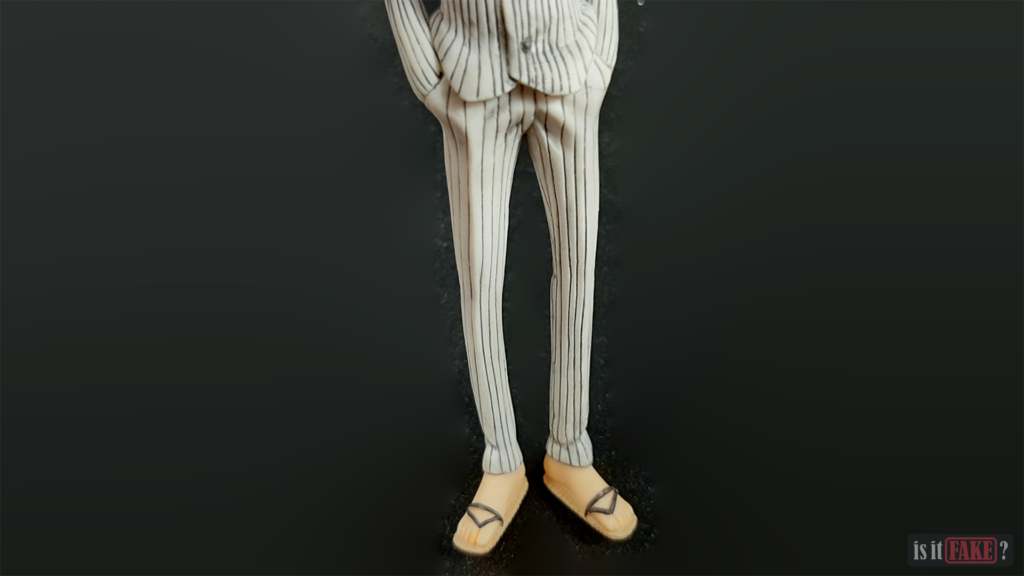 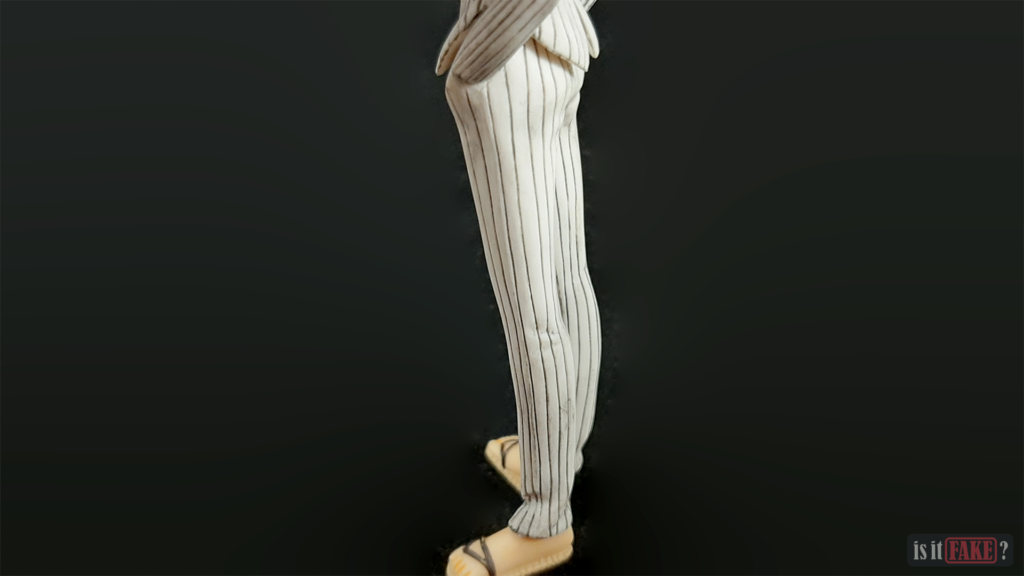 Right side of the lower body 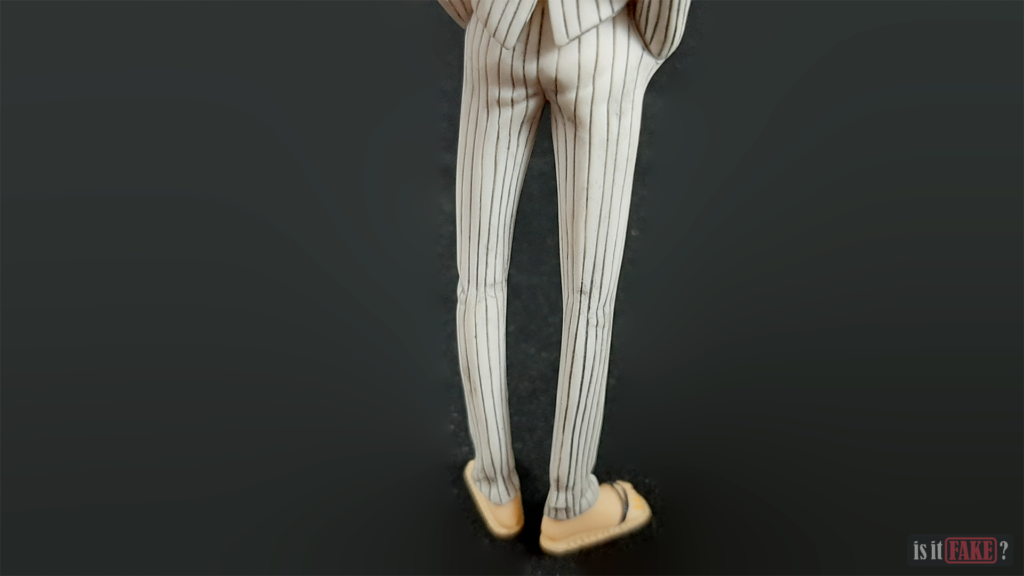 Back side of the lower body 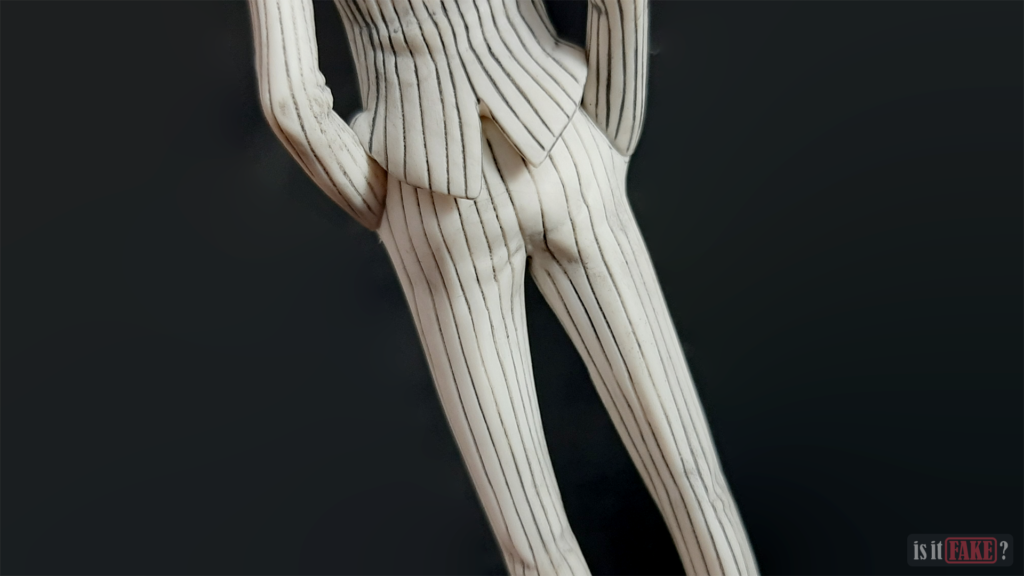 Close up on the stains

Upon looking at the bootleg’s lower body area, you’ll still see fewer but noticeable stains. It seems like the paint used for the stripes isn’t the type that’s used on good quality figures.

While the area is similar to the body, you can see the difference on the flaws present. The figure’s also wearing slippers on its feet, and however tiny the flaw is, the scratch on the right slippers still makes the figure look awkward up close. 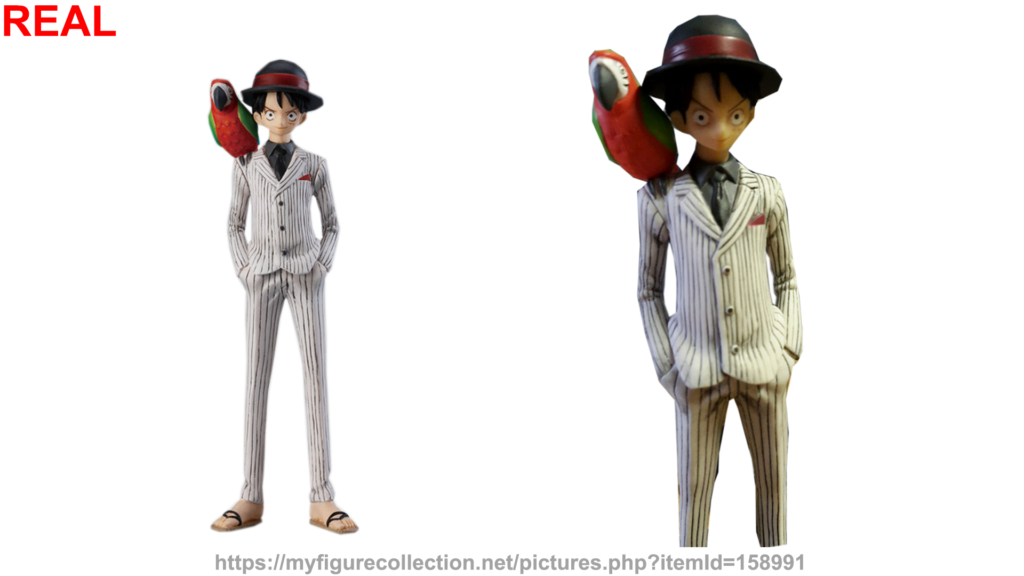 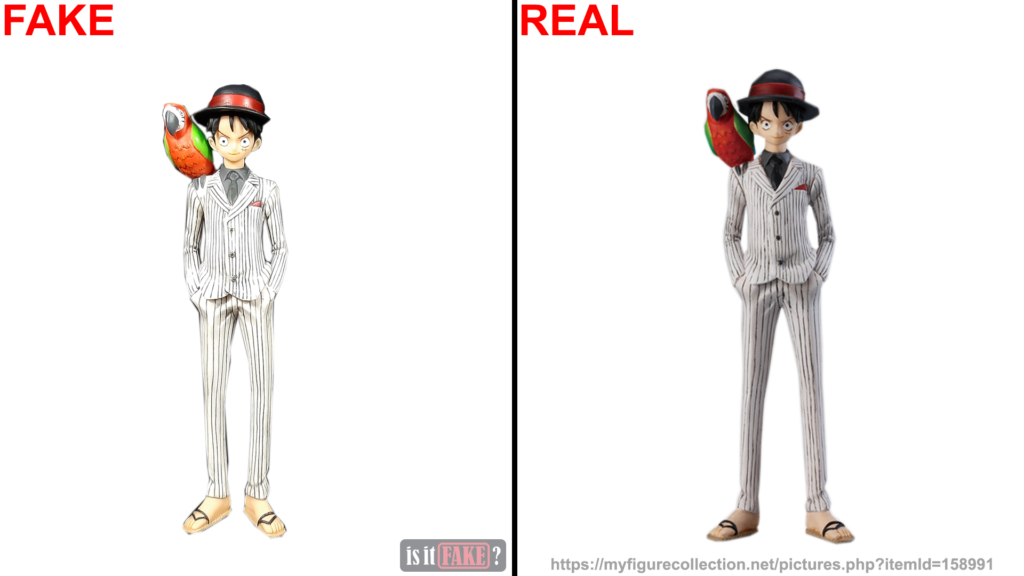 The real Suit & Dress: Luffy figure showcases a flawless, low tier quality style. By low tier, we mean that it’s still the good stuff but on a budget. Although the authentic figure is still far from well-detailed designs, the details on this one is really on point at the least. And unlike the bootleg, it has the base included.

Admittedly, the Suit & Dress collection is a relatively old design. It was released back in 2013 and there have been far better One Piece figures that were released after that. If you’re still aiming to collect the set though, you might be better off looking in the pre-loved sections.

Admittedly, the fake Suit & Dress: Luffy figure only costs $3.90 USD on the shady website. But what do you really get from that price? Considering the amount of shipping added to it, is it really worth the hassle, not to mention the ugly figure you’re gonna get?

According to valid sources, the real Suit & Dress: Luffy figure may go as low as $11 USD. Apparently, the last figure stocks were already sold out, and it was sold in sets. Four figures from the Suit & Dress collection amounts to around $43 USD, making each figure a good deal to buy.

WHERE TO GET A REAL BANDAI ONE PIECE STYLE: SUIT & DRESS LUFFY FIGURE

If you’re an avid fan of Luffy from One Piece, you’re definitely in paradise shopping in BigBadToyStore! Without going out of the Styling concept, the Treasure Cruise World Vol. 1: Luffy figure is a good alternative. Banpresto boasts its capabilities of styling the main character in such a flawless manner. You can get the figure for around $21 USD in the website.

If you’re into Japanese culture, you might also like Monkey D. Luffy in a Japanese swordsman attire.

In Ninoma – The Japanese Market, you can get the DXF – The Grandline Men – WanoKuni Vol. 1: Luffy figure for only $18.55. You’ll definitely be satisfied with how Banpresto sculpted the figure as it looks really smooth in detail.

Needless to say, there are a lot of Monkey D. Luffy figures out there, and you won’t ever encounter a bootleg from the websites we’ve recommended. Who would even collect bootleg One Piece figures anyway? It’s a highly known anime and it’s popular for quality merchandise — figures included! You won’t have any loss collecting authentic One Piece figures, and that’s the bottomline.

Will you even keep a figure that’s full of ink stains? Of course not! The bootleg Luffy figure is on a whole level of mess. It’s a complete disaster even for a small figure. The details are also screwed. The sloppy paint job did a good job ruining the overall experience of looking at the figure.

Absolutely, you’ll give this bootleg a pass! It deserves a 90% awful rating, indeed.