In another timeline, Son Goku eventually died because he wasn’t able to cope with a strange heart virus, leaving him unable to be resurrected by the dragon balls. Future Son Gohan had to stand up for earth as its last line of defense since every Z fighter has already been eliminated by the notorious androids. Together with Future Trunks, they were able to fend their enemies off — only until Cell came into action.

The difference between the current Son Gohan and the Gohan from another timeline was their appearance and personality. Future Son Gohan has battle scars and speaks like a true warrior, unlike his present self who’s more studious and professional. The Resolution of Soldiers collection by Banpresto really fits Future Son Gohan’s vibe that is why the figure manufacturer had a bunch of them released as prizes back in 2017.

Since prize figures are hard to get, figure pirates managed to take advantage of this and released their own version of the figure. Mind you, it really looks terrible.

If you ever decide to look over bootlegs on AliExpress, it may seem harmless at first. True enough, you can do this solely for research, but if you’re going to shop for figures with a purpose of collecting, then you’re gonna have a bad time.

It’s just difficult to find authentic figures on AliExpress, if there are even legitimate anime figures on the website. Apart from that, sellers are mostly named randomly. Take Desen Toy Store as an example, although it seems like a generic name. If you’ll just scroll through the seller’s inventory, you’ll find dozens of suspected bootlegs. You can already tell that it’s not gonna be legit from the item postings.

If you ever encountered a suspected fake anime figure personally though, you might want to take down notes from this fake Future Son Gohan figure.

Bootleg figures are usually designed to fool people. Without a doubt, this fake Future Son Gohan is one of those bootleg that took some time so that you’ll buy them unknowingly. For a start, take a look at the box of this bootleg. 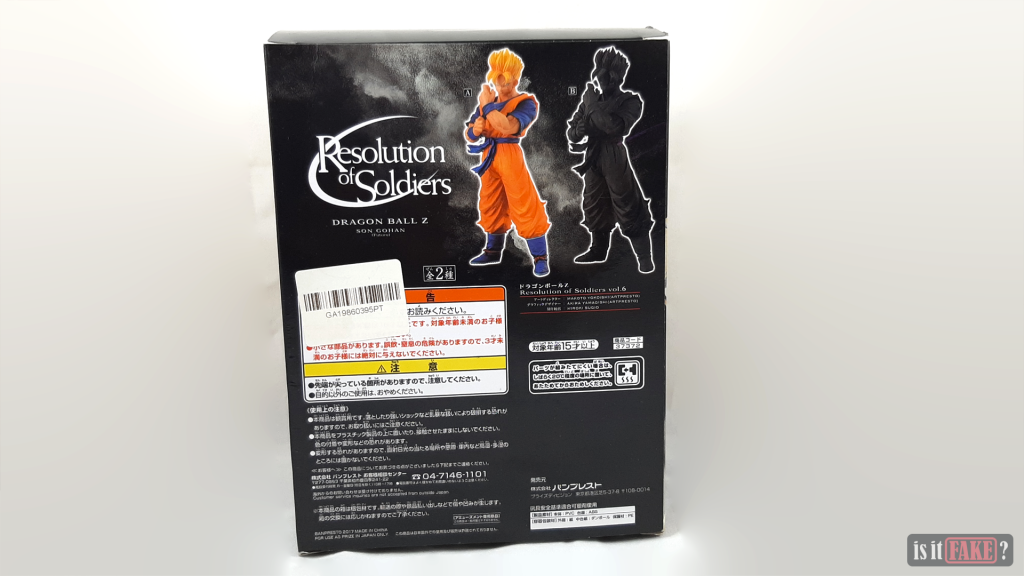 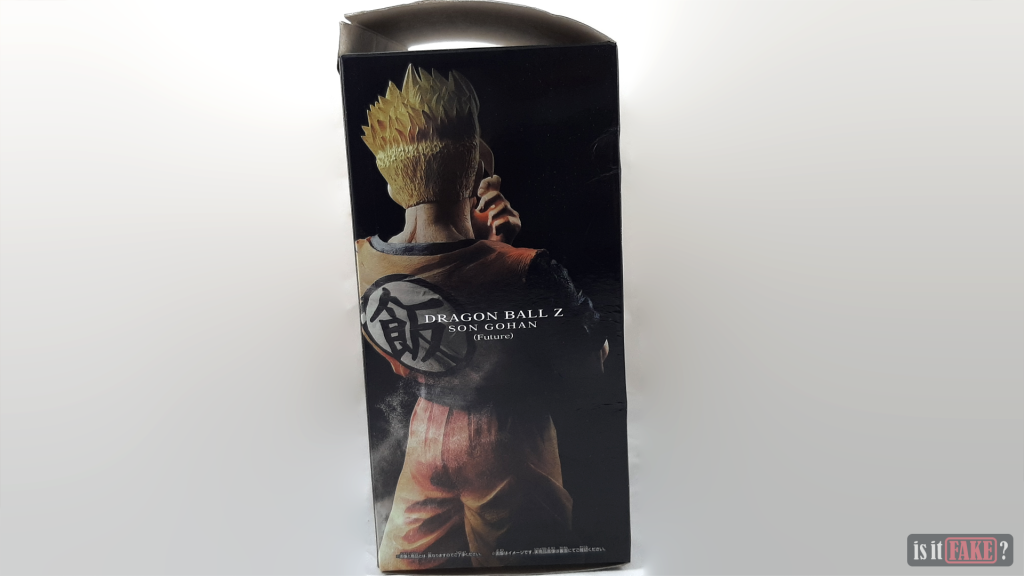 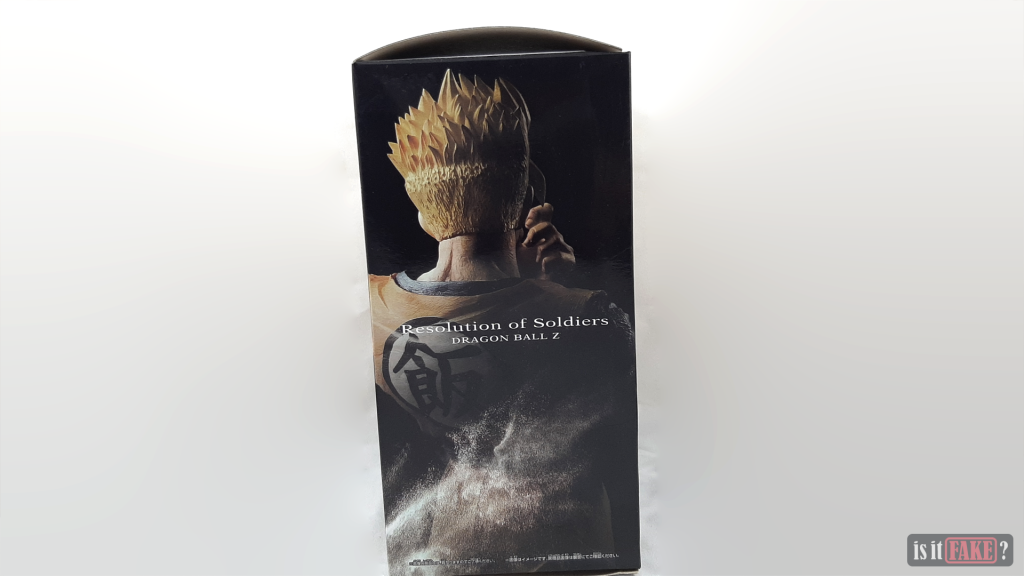 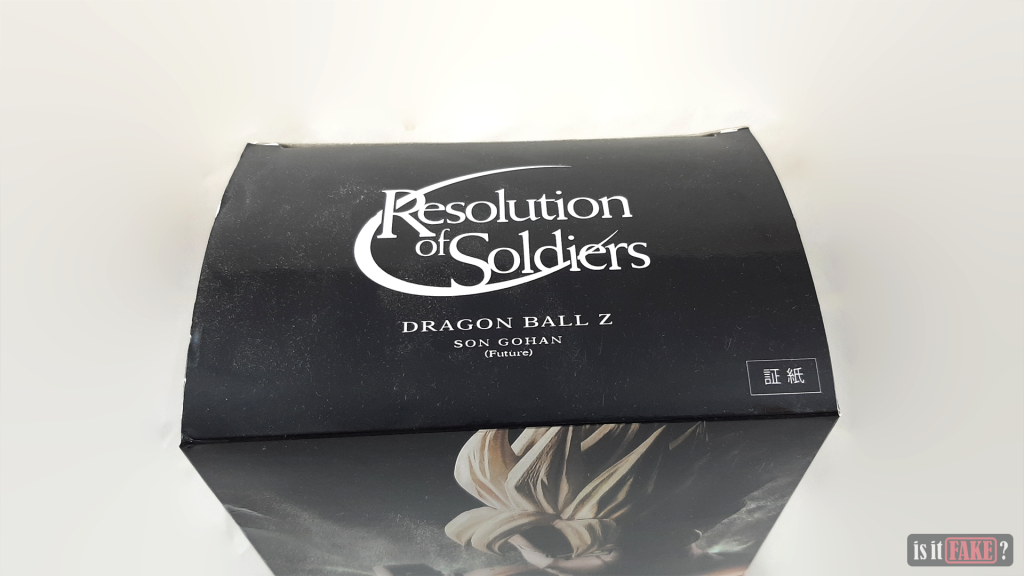 The quality of the packaging really feels solid, but that’s what figure pirates want you to see. If you look over for logos though, you won’t be able to see the manufacturer’s logo. It’s important that you always take down which manufacturer made the figure, so you won’t fall into a trap. And as for this bootleg’s box, it’s plainly missing the Craneking logo and the Banpresto logo.

Admittedly, the quality of the packaging seems flawless. The texts and the images look high-quality, but the whole thing is totally unsealed. It makes you doublethink about what’s really going to be inside of it. The fake figure - in  plastic The fake Son Gohan figure - back

Out of the box, the fake Future Son Gohan figure is sealed in a tough plastic, surprisingly. There’s something odd about it though as there’s an adhesive tape that’s used to seal the figure and the base inside. This is weird enough because authentic figures aren’t sealed in cheap adhesive like this one.

At a fair distance, you can see that there’s a lot of flaws on this bootleg. It’s still surprising that the bootleg fits perfectly on its base, but there’s no second-guessing as to whether this is really a fake or an authentic figure. 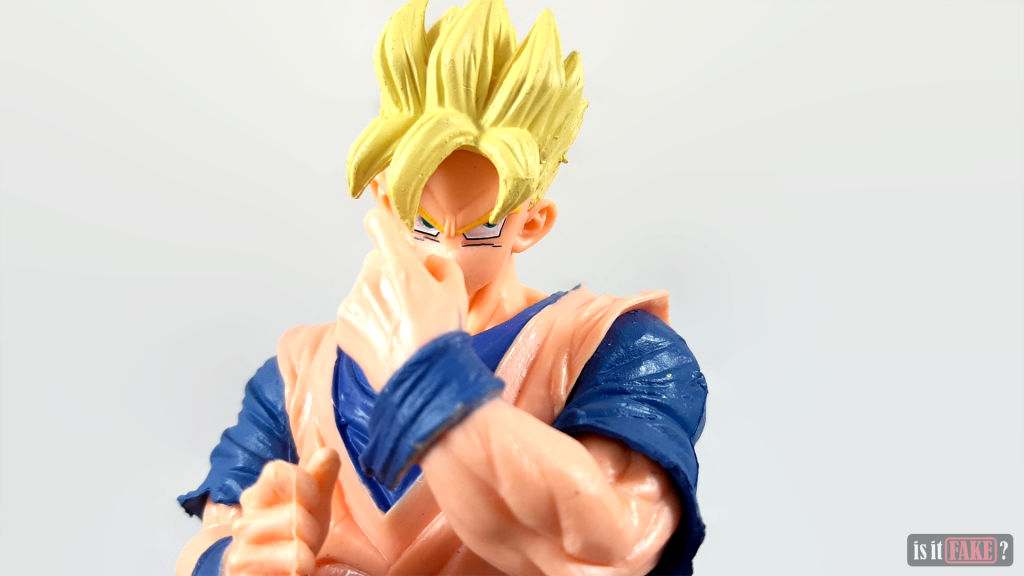 Close up on the fake figure's head and face 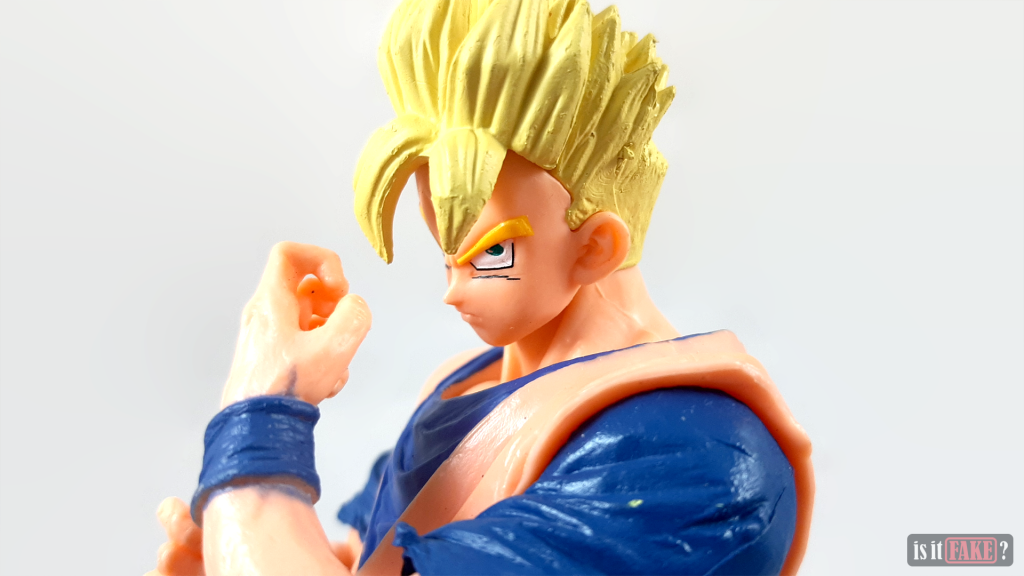 Another angle at the fake figure's face and hair 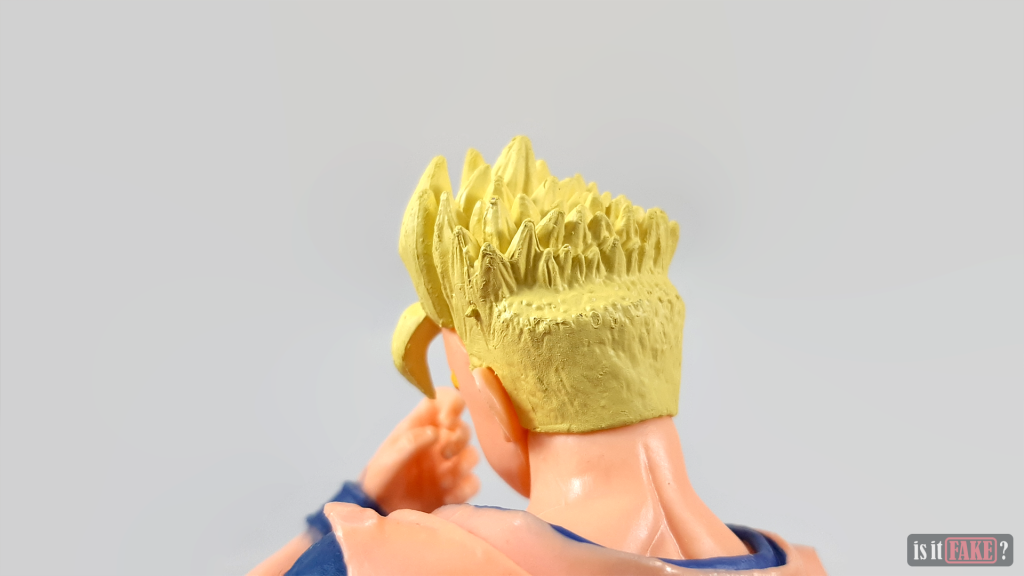 View of the fake figure's hair - back 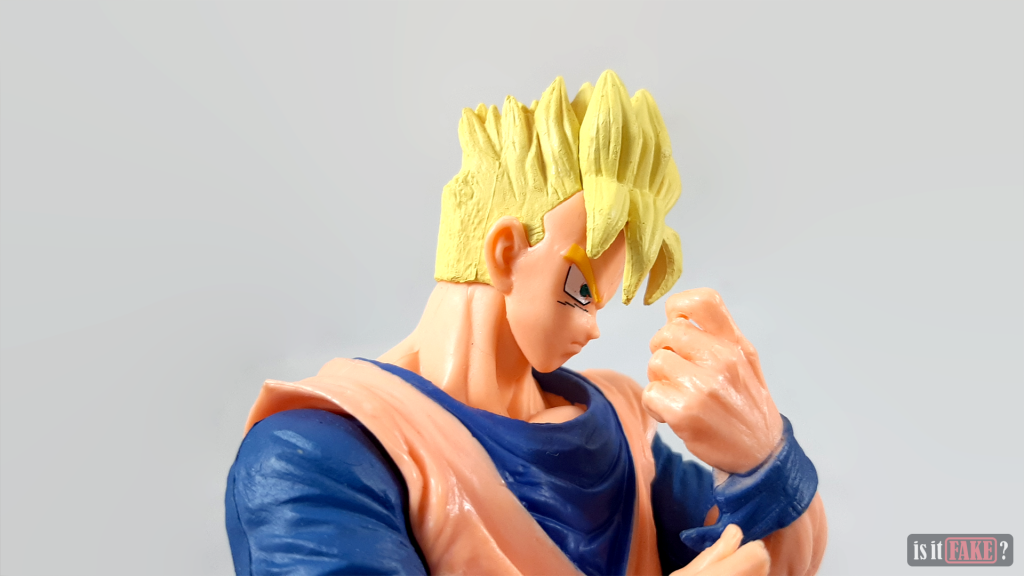 View of the fake figure's hair and face - left side

Using the character for reference, Future Son Gohan wears a bright orange uniform over a navy blue shirt. His Super Saiyan hair though has a color of yellow with details of mild orange. For this bootleg, however, the hair only comes off as bright yellow, and if you get a full view of the area, you’ll see some dents and tiny paint pops as well.

You can tell that there’s a little crack on the left eye of the bootleg, although the maker of this fake still managed to hide it with the little amount of paint used on its eyes. 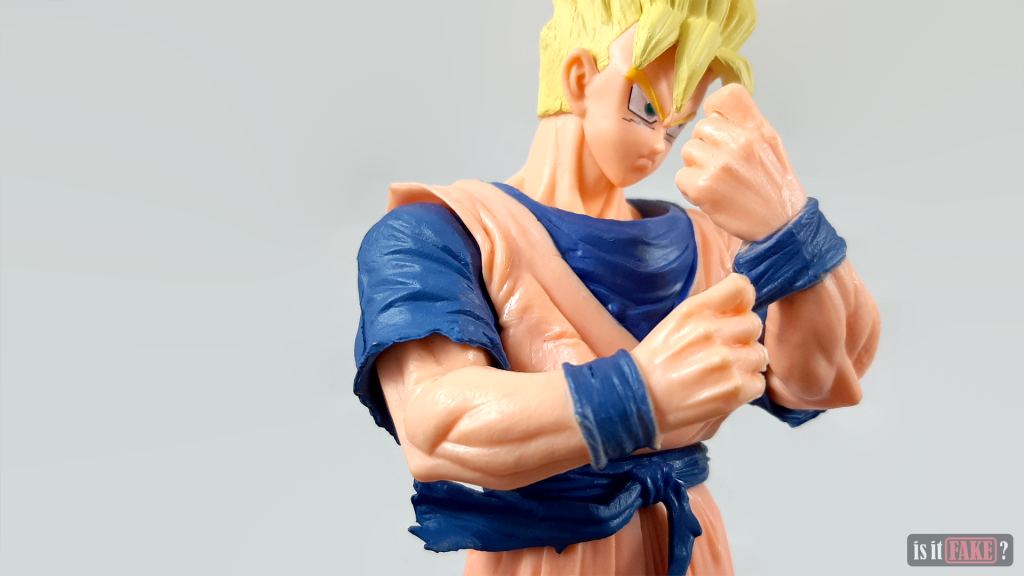 The fake figure's body and arms - left side 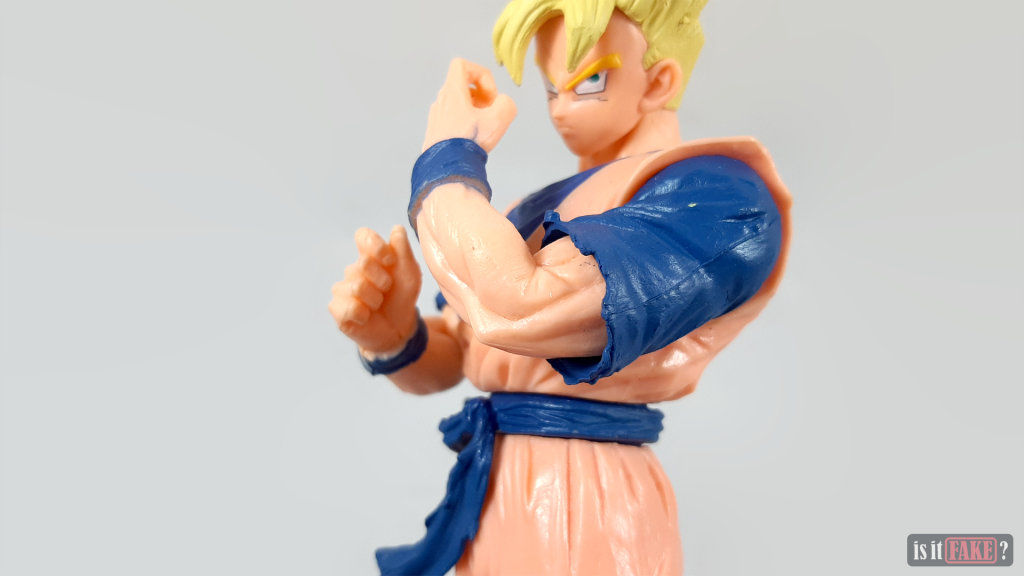 The fake figure's body and arms - right side 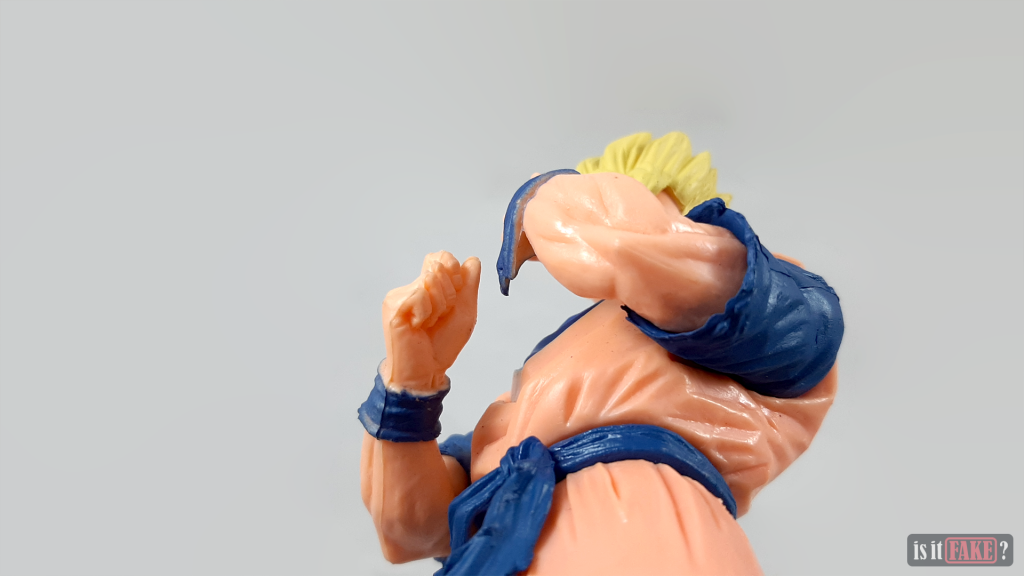 View of the unpainted areas on the wristbands 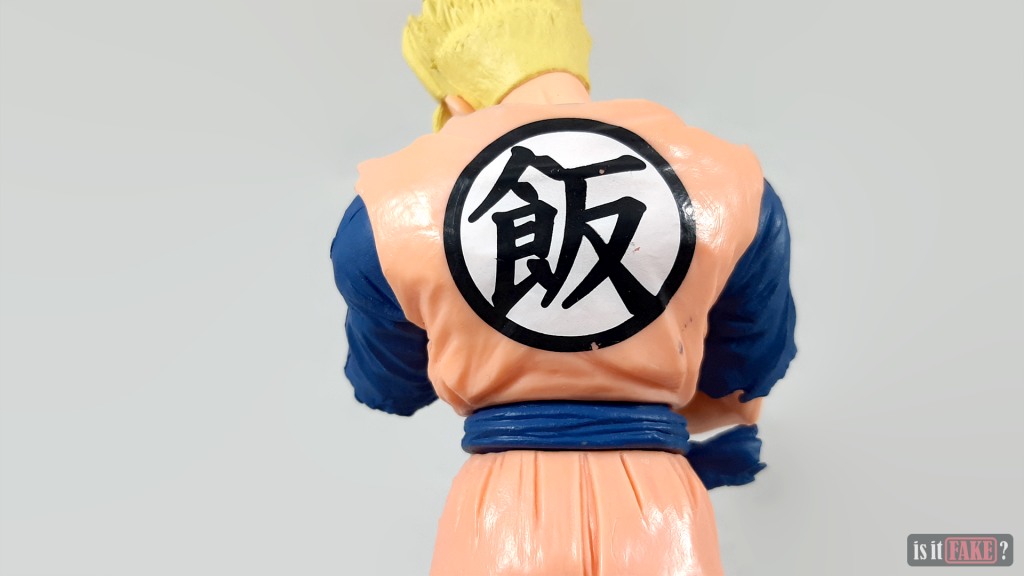 Now that you’re seeing the fake figure’s body up close, you must have already noticed that the bootleggers used the wrong paint for its uniform. It’s possible that they ran out of paint, and instead, used the color that was supposed to be painted on the skin.

Apart from the color difference, the fake Son Gohan figure’s wristbands are painted inaccurately. You can see that the inner areas are faded, if not painted at all. The back area of the body also has a few tiny scratches and a spot on the lower right. Detail-wise, you can tell that the body is in bad shape. 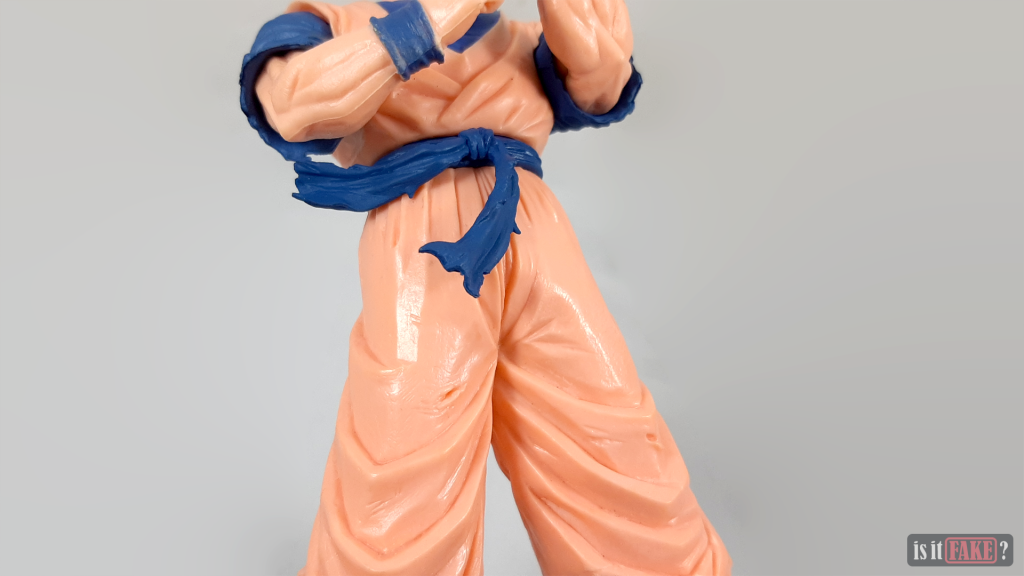 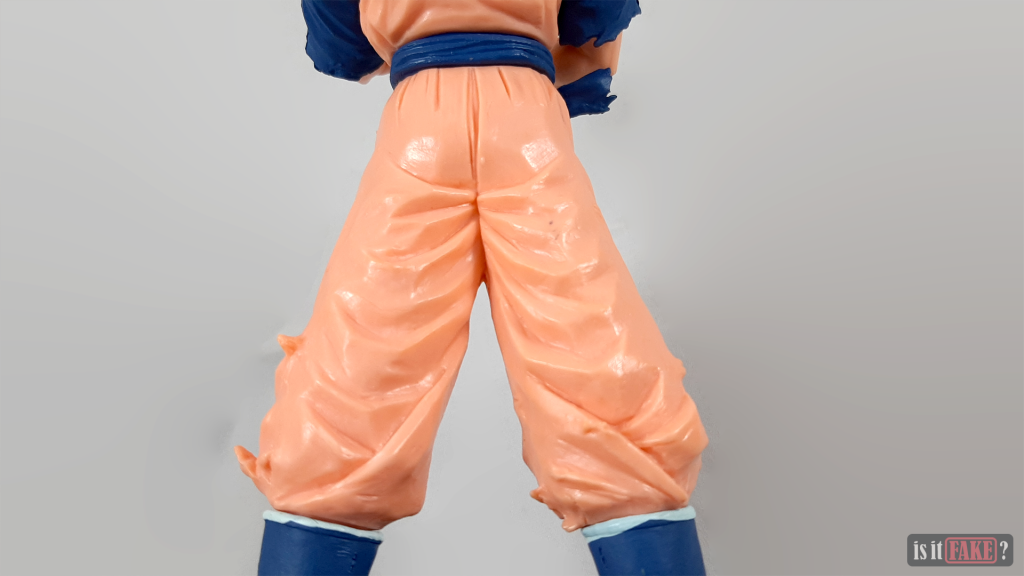 The fake figure's legs- back 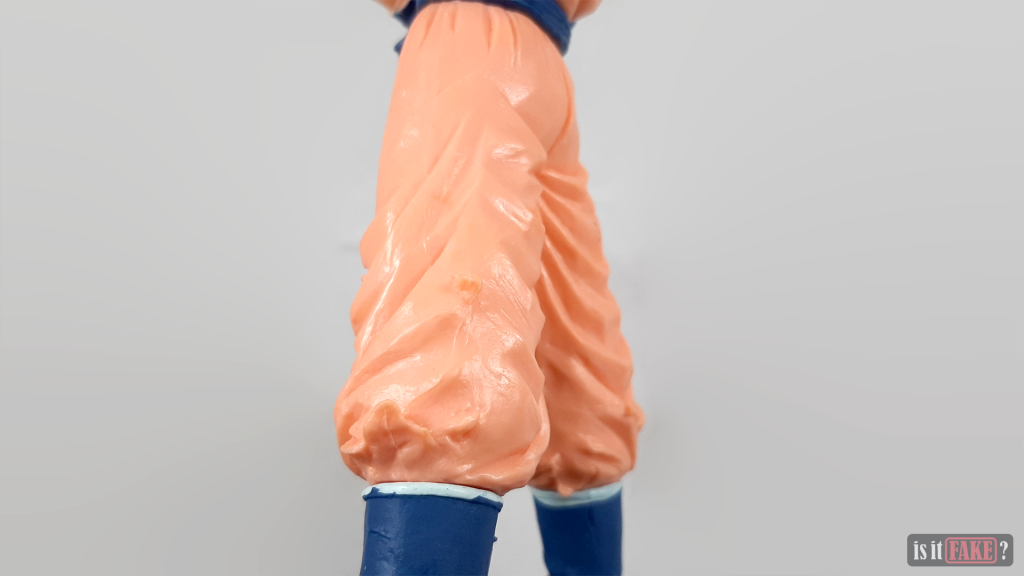 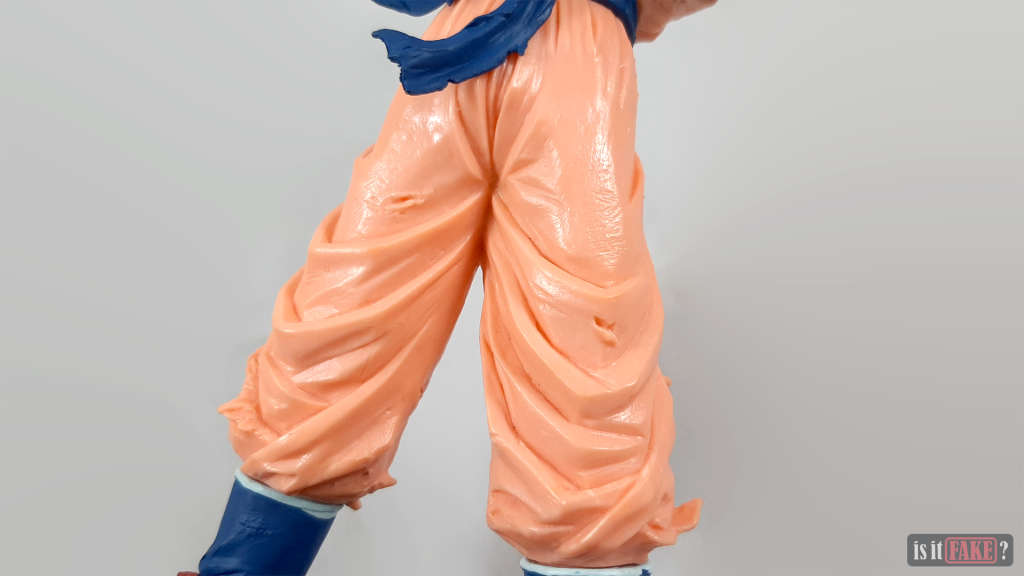 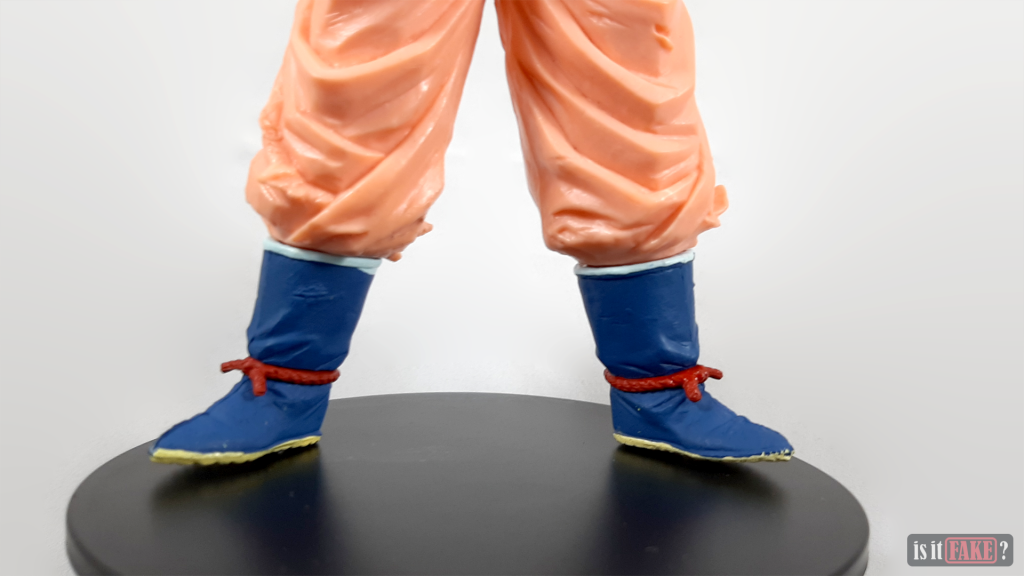 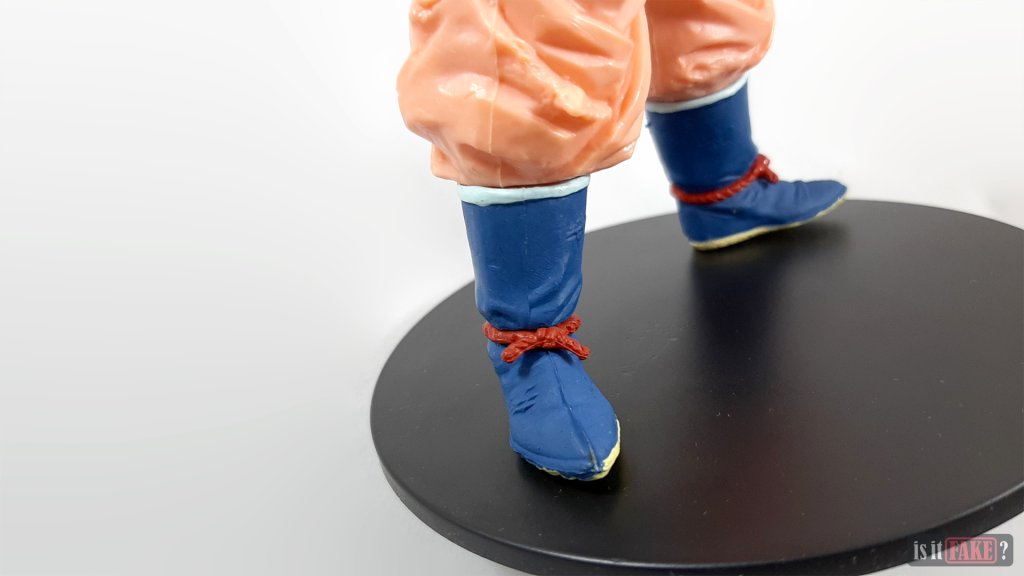 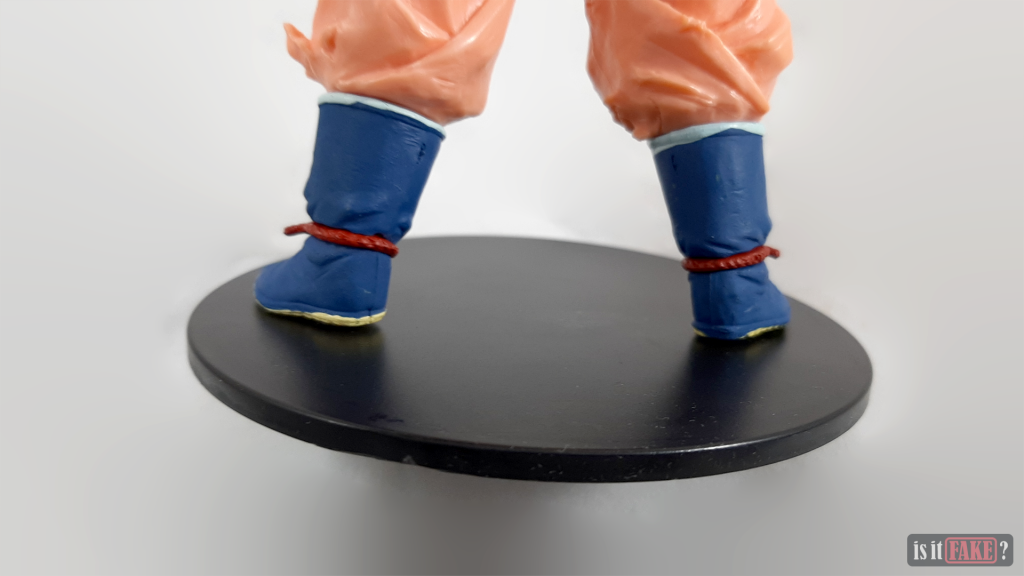 The fake figure's shoes - back view

The lower body of the figure is designed to be a little ragged, even for the authentic Future Son Gohan figure. It might be a little difficult to spot some flaws here because there are supposed to be dents in the area, but you can still tell which is which.

The supposed damages on the lower legs are really crude, if you look at them closely. The area’s like a melted portion, although you’ll be able to see that there are really ‘torn’ parts as well. In addition to that, a spot is inevitable in the said area.

The shoes aren’t looking good since you’ll be able to notice that the paint job is a bit sloppy on the bottom side of each one. Some details are also overlapping one another. On top of that, it’s hard to tell in this area if there are supposed to be damages on the design, but regardless, the dents look really terrible. 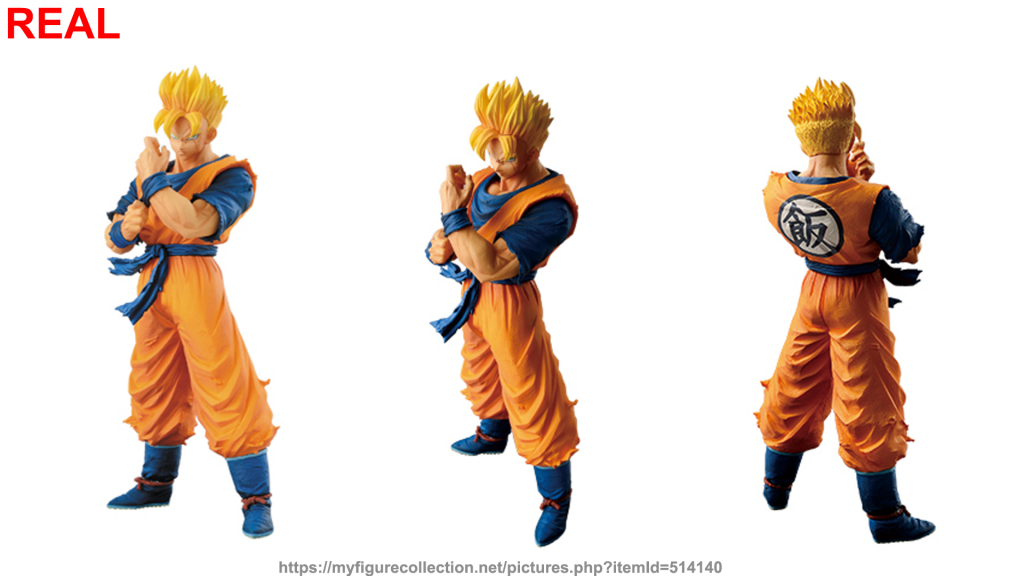 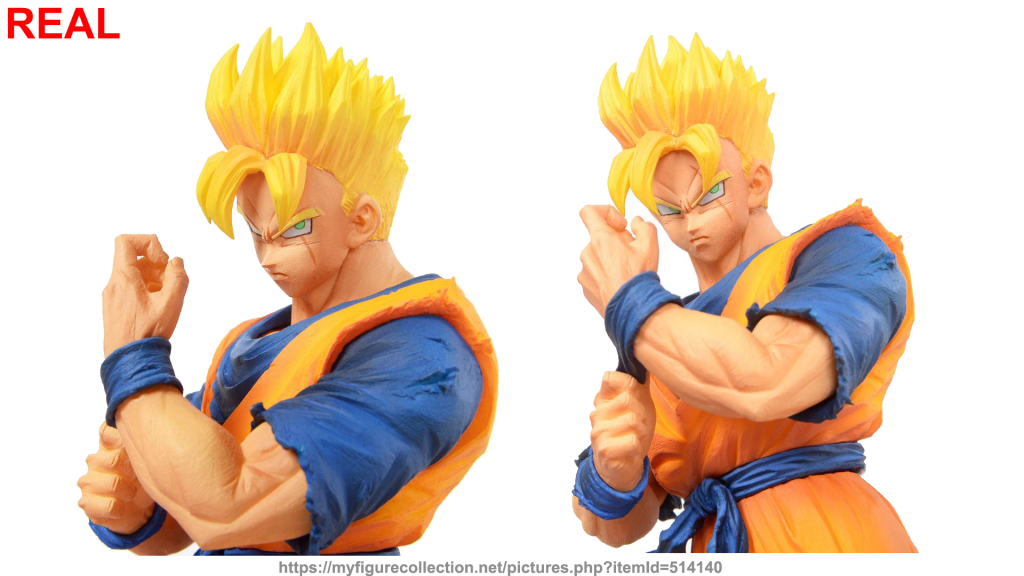 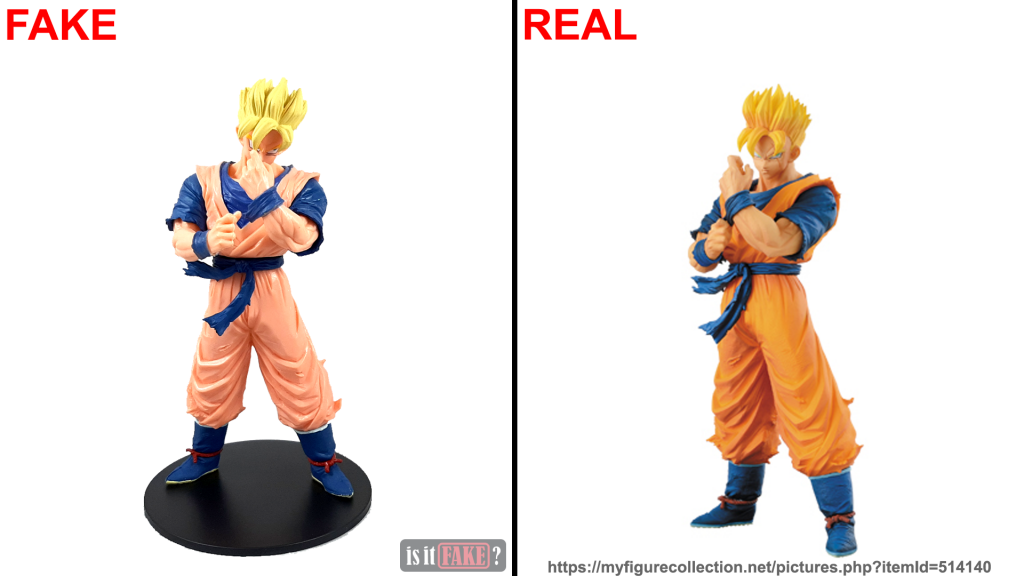 The fake Son Gohan figure really has a knack of getting avid collectors mad. Its inferior design and cheap paint job doesn’t deserve the almost $13 USD price tag. Surely, you won’t even consider shelling out the budget for any counterfeit action figure.

The Resolution of Soldiers: Future Son Gohan figure might be running out of stocks, or it was just a hard catch on Japanese arcades that made it have the $71 USD price tag. Nevertheless, if you’re really eyeing into completing the collection, then you’d be more than happy to get the figure.

WHERE TO GET A REAL BANPRESTO RESOLUTION OF SOLDIERS: FUTURE SON GOHAN FIGURE

Currently, we found the real Future Son Gohan figure on a Japanese-operated global website. You should be able to find a few stocks on Ninoma – The Japanese Market.

$71 USD might be a bit too much for a prize figure, but you have to consider that limited figures are sought-after and they could very well be out-of-stock from other stores — except, of course, if you’ll go over on Amazon.

You have to be wary when shopping for anime figures on Amazon since there are item posts that could very much be a bootleg. Although there are authentic items, there’s a possibility that these items are mixed with bootlegs, so there’s a chance that you might get yourself one in the mail. However, item posts that are labeled as authentic can be contested, and you have every right for a replacement, or a refund.

The fake Future Son Gohan figure is just a mere, basic copy of the original and it’s even bad at doing it. It has missed out important details of the character, and even worse, the bootleggers didn’t have the correct color palette to do an appropriate paint job. More or less, it could be a factory-defective item, but it won’t change the fact that selling unauthorized items is illegal.