As one of the Marines’ most wanted, Luffy did take some effort into disguising himself to being incognito. It seems that being off the radar is the trend for the anime One Piece’s Dressrosa Arc as the Strawhat Pirates’ goal to stop the atrocity of the Donquixote Pirates within the kingdom commences. In order to fight off these notorious villains, Monkey D. Luffy then emerges as Gladiator Lucy to fight in a royal rumble match against all odds for a rare Devil Fruit.

With a new persona for Luffy, figure collectors sure saw this as an opportunity to add a new piece to their collection. Although it could take a lot of cash, dedicated One Piece fans will definitely shell out for their favorite character especially once he’s equipped with viking armor. Banpresto have answered these fans’ wishes as they make Gladiator Lucy figures in different collection – the World Collectable Figure being one.

The World Collectable Figure collection comprises of downscaled figures that are usually released in sets. These figures aren’t to be called chibi figures, however, as they are far from being cute, but they are adorable, nonetheless.

As Craneking collectable prizes, World Collectable Figures are obtainable through various events, mostly crane games, in Japan. This means that their price would definitely be affected on how hard they are to get plus the quantity of released figures. Regardless, figure pirates, on the other hand, won’t care less of how rare a luffy figure is priced. They’d make a copy of it out of their sloppy skills.

AliExpress being shady doesn’t mean that they could be selling the bootlegs themselves, but regardless, they still take responsibility of controlling the rampant presence of these rubbish products on the website. Together with the bootleggers, they stand in the way of a flourishing economy, and a rich culture of figure collecting.

It’s not surprising at this point that fake items are shipped worldwide. With accessibility to such websites like AliExpress, the market’s already out in the open. However, it’s in every shopper’s discretion whether they’ll be giving in to buying cheap bootlegs or be investing in on a better collectible that will not only last long but will also hold premium value in a collection. Doing some research also comes into play when puzzled between these two choices. You can start doing so by taking a closer look at this fake World Collectable Figure: Gladiator Lucy. 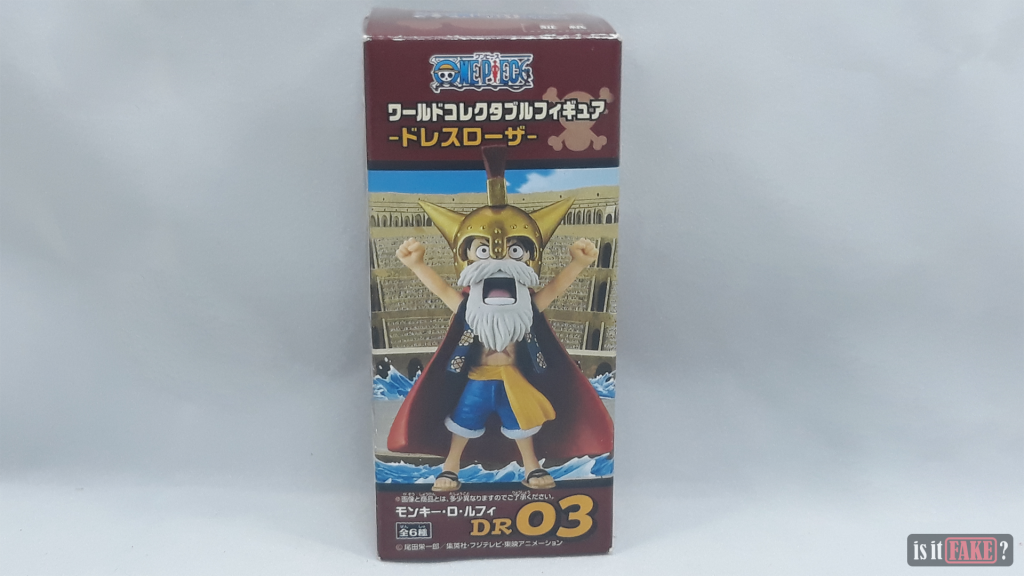 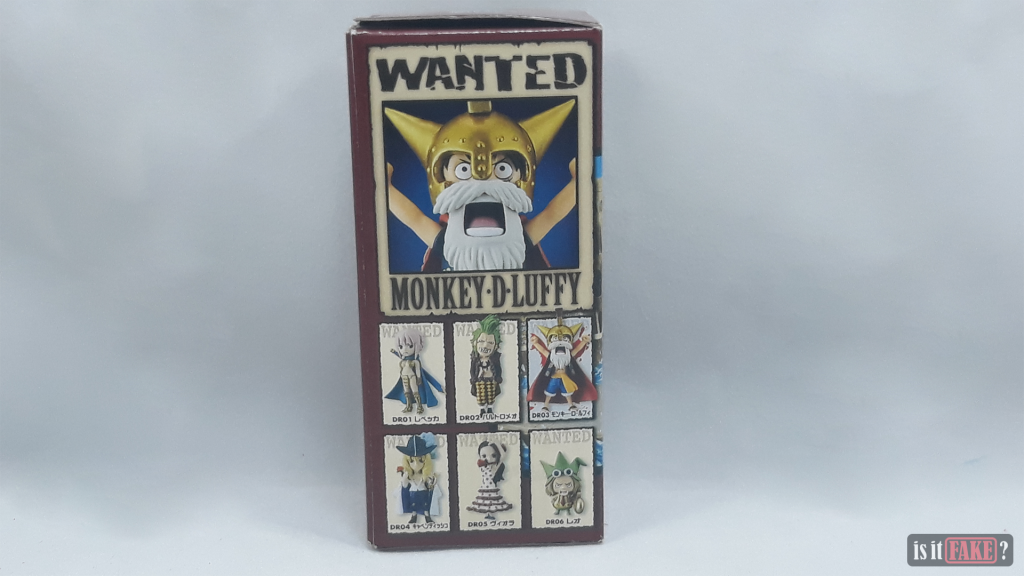 Left side of the fake figure's box Right side of the fake figure's box 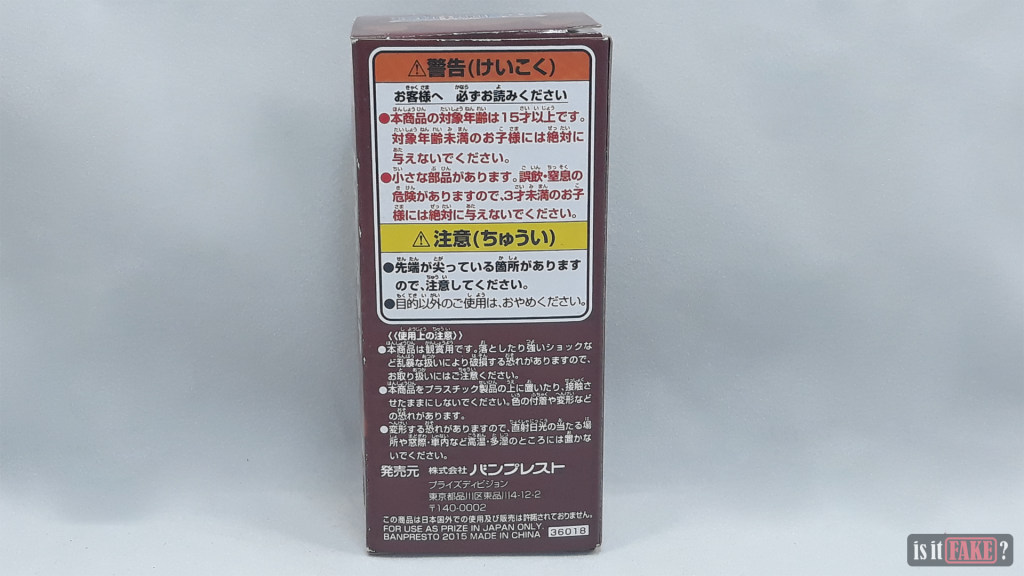 Back of the fake figure's box 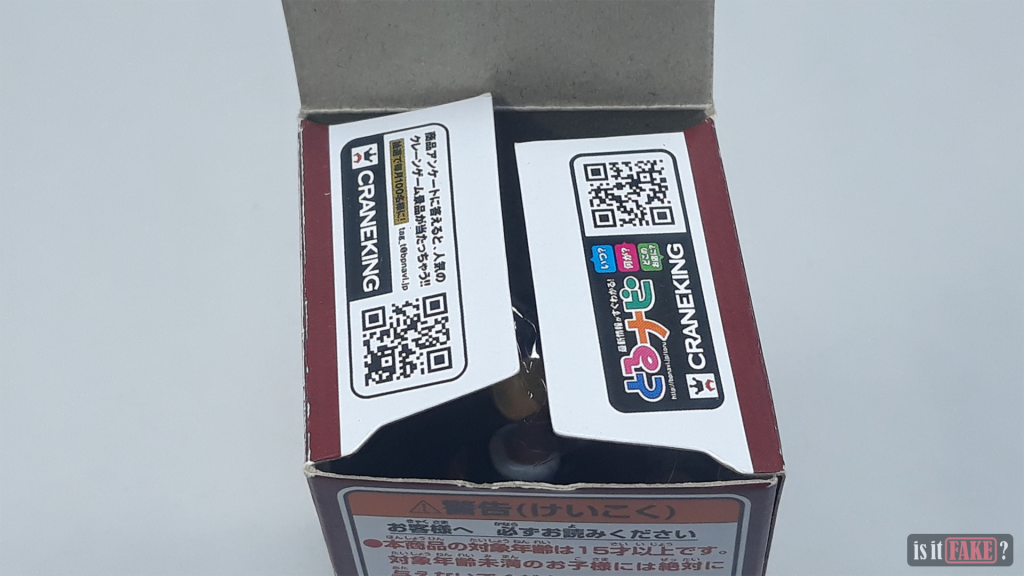 Damages on the fake figure's box 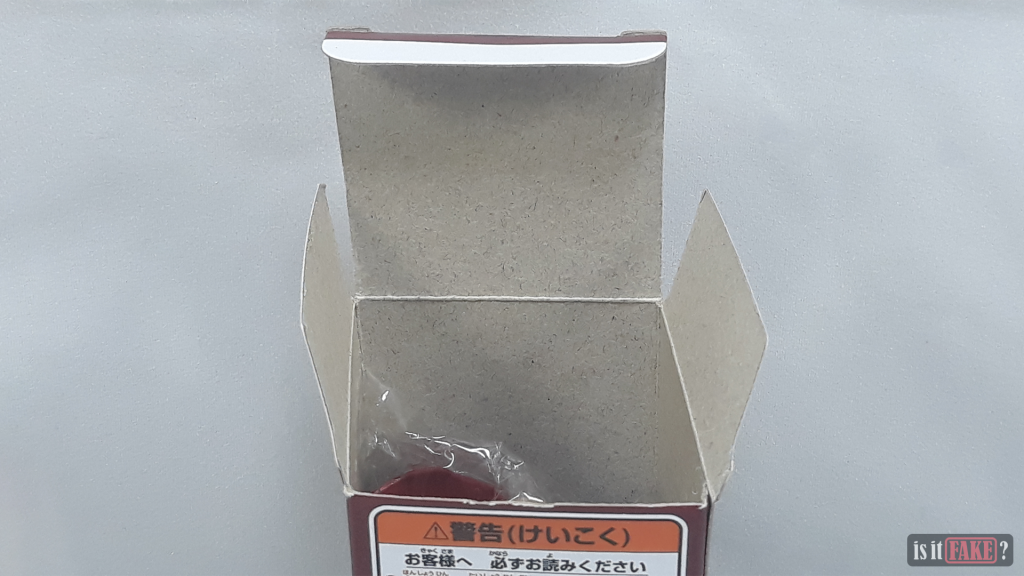 The box of the fake World Collectable Figure feels like it was made from cheap cardboard as it’s floppy and thin. The printed layer of the box, at first, seems credible although with closer observation, you’ll be able to notice that the art has inadequate resolution. There are noticeable pixels that can be found on the print, and that’s aside from the scratches on some corners of the box.

Apart from the box’s visible flaws, the box also has QR codes on the inner flaps – perhaps so that the box could look like a real World Collectable Figure box. Although it’s risky to scan unknown QR codes especially from a bootleg’s box, the results point toward Banpresto’s websites.

Nevertheless, you’ll be able to notice the inconsistency once you see a real World Collectable Figure’s box. Logos to be expected on a World Collectable Figure box 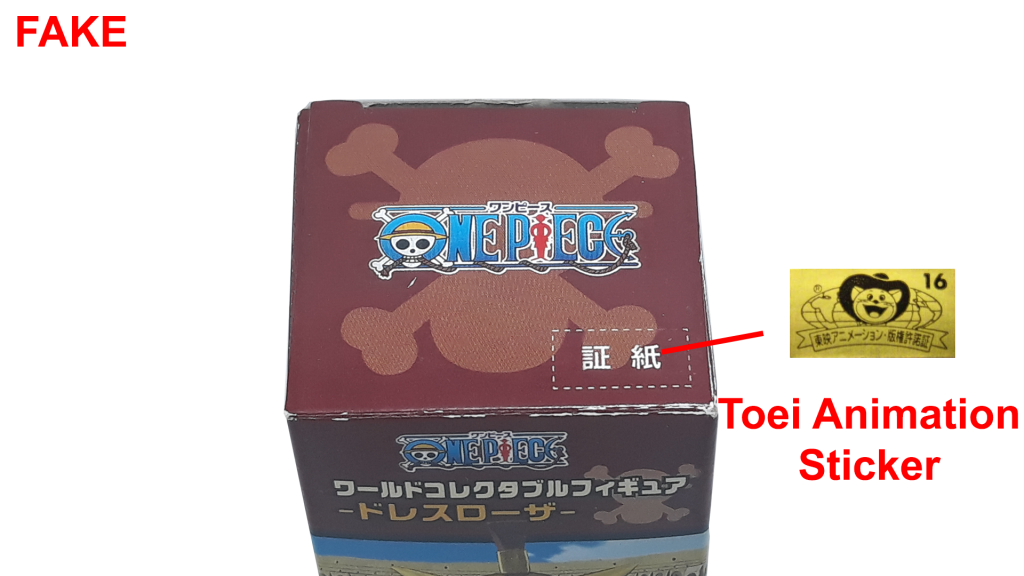 The fake Gladiator Lucy figure’s box has a Craneking logo, but it’s only located on the inner flaps. As you can see, the box of a real World Collectable Figure should have the Banpresto logo and the World Collectable Figure logo. And as a prize figure, it would also have the Craneking logo. More importantly, the One Piece figure, being licensed by Toei Animation, will have an authentication sticker.

The manner of presentation of a figure’s packaging often tells whether it could be suspected as a fake or not. Bootlegs usually don’t have manufacturer logos, and it’s a flag that should always be kept in check. For this reason, it’s important to know about which manufacturer made the figure, in addition to being familiar with notable manufacturers as well. 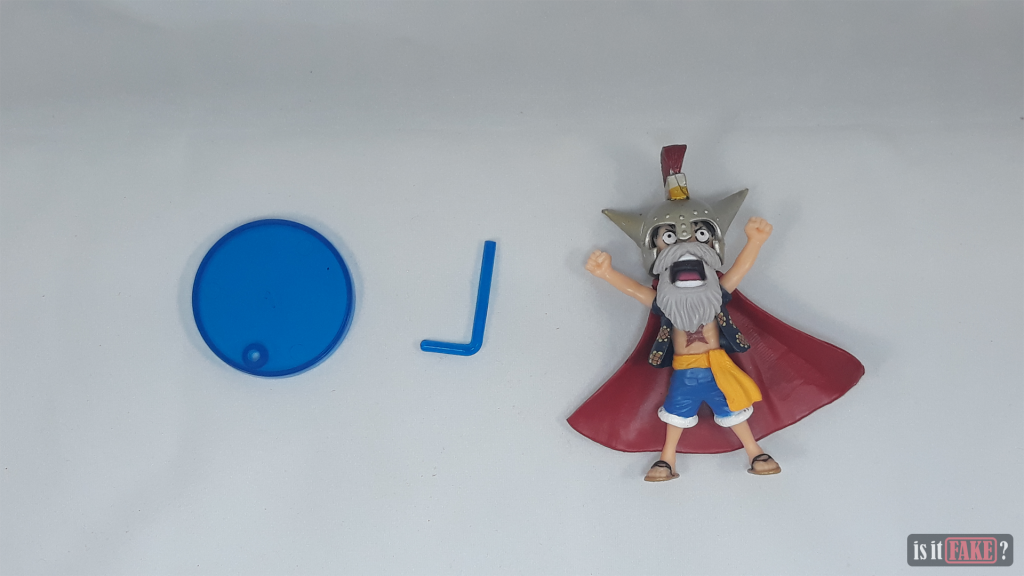 The figure components out of the plastic 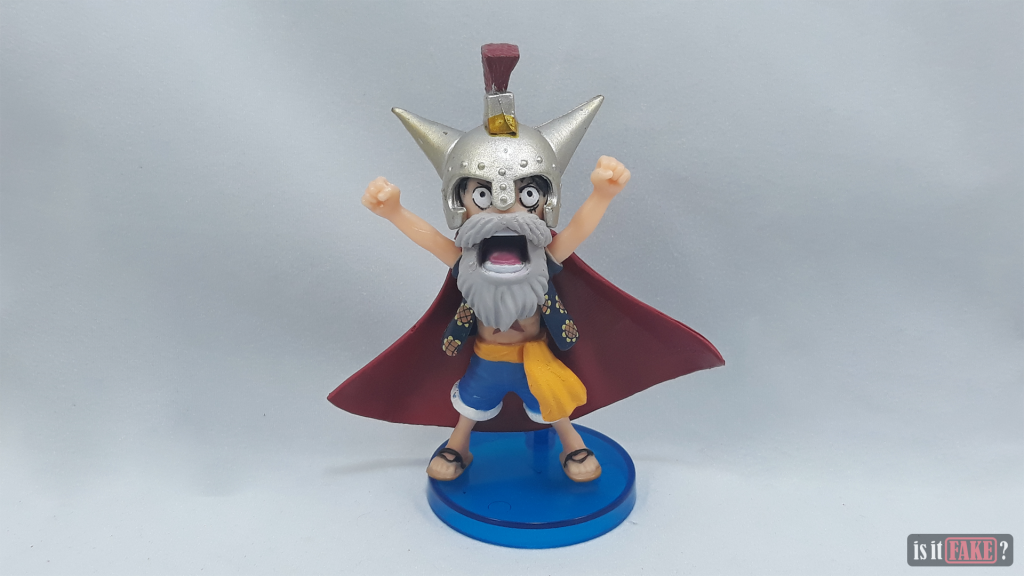 Overall look of the fake figure 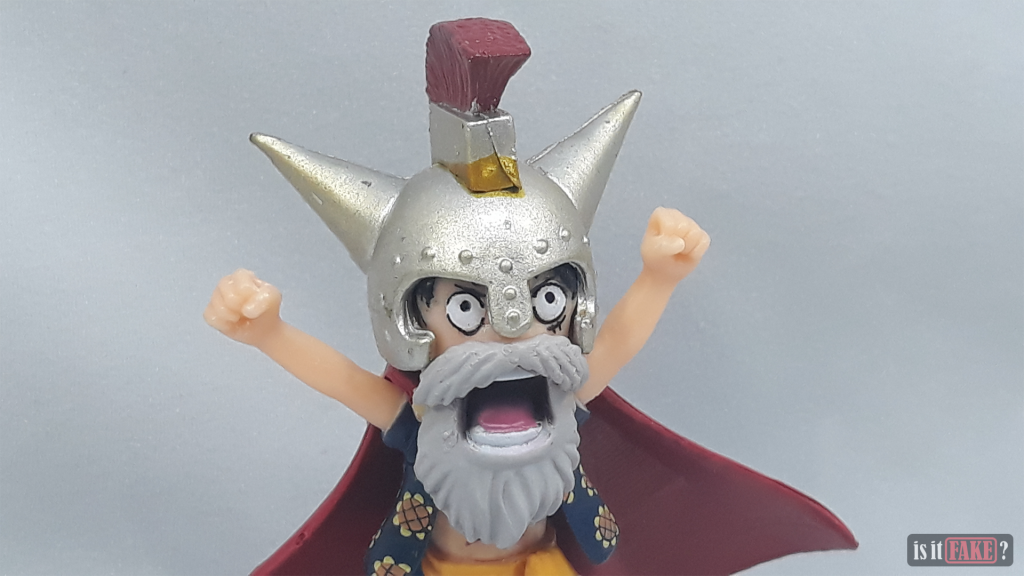 Close up on the fake figure's helmet 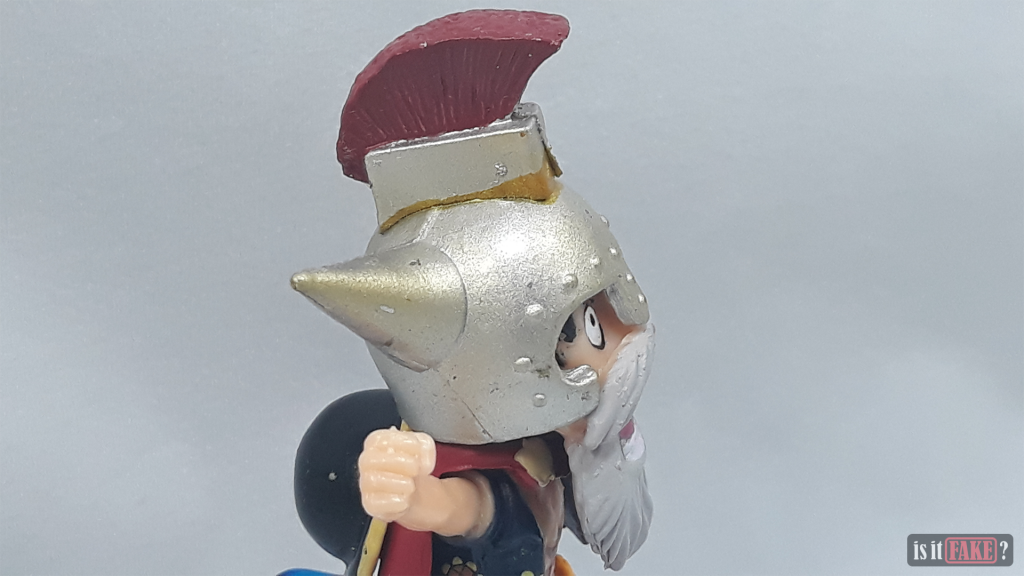 View of the helmet from the left 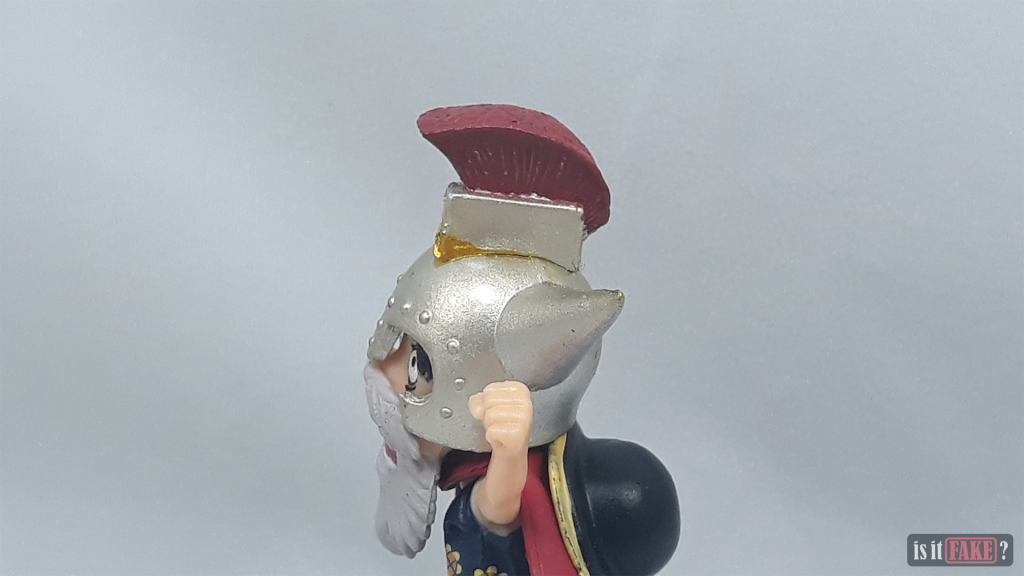 View of the helmet from the right 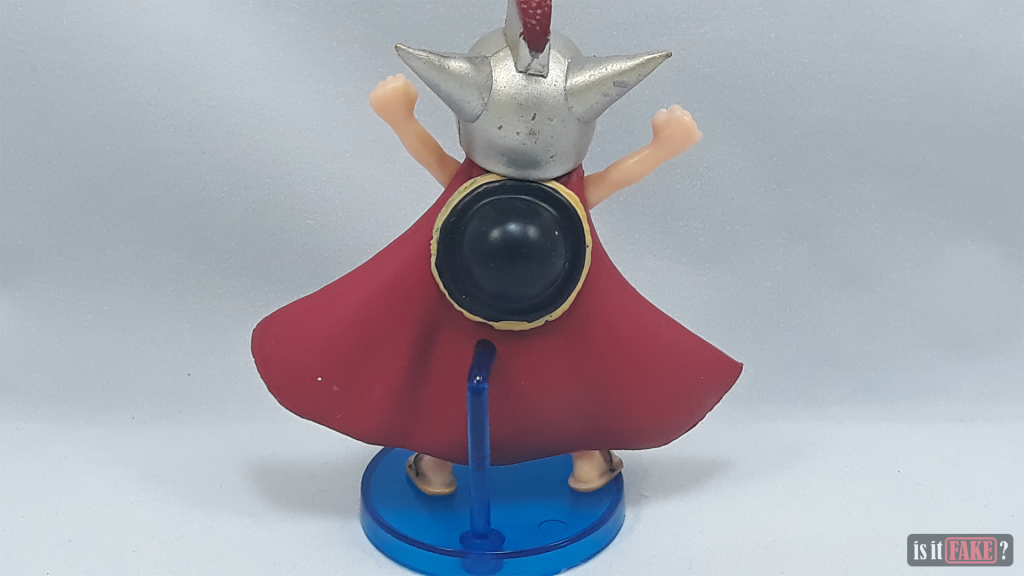 View of the fake figure from its back 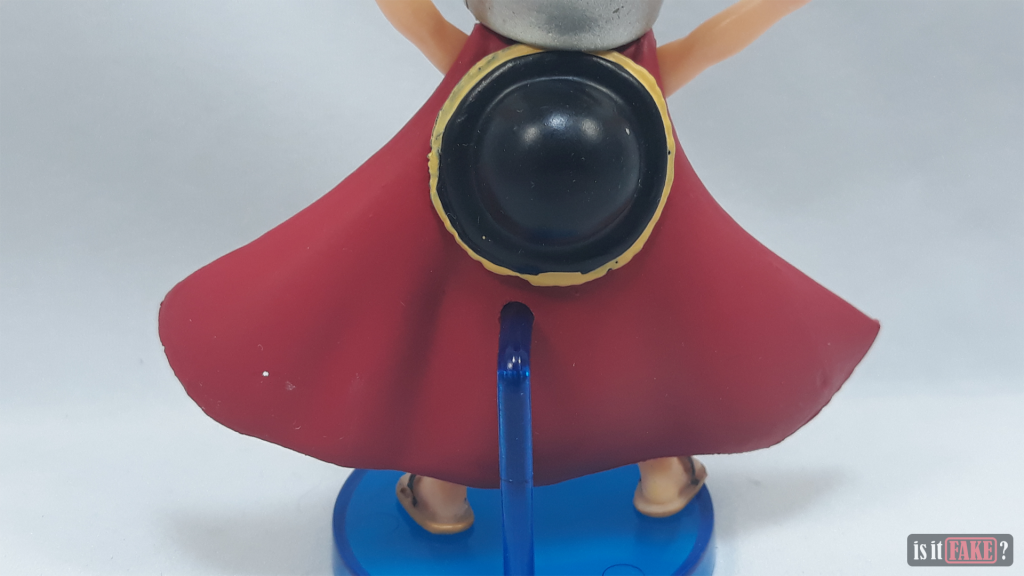 Close up on the fake figure's rear

The fake World Collectable Figure: Gladiator Lucy is definitely a mess upfront. Aside from the fact that it’s only in shabby plastic, you’ll already be able to compare it from the box’s cover. Overall, it already looks pale from a glance, but of course, we’re all just starting.

The fake figure’s helmet has a pale color of gold that would eventually turn silver if it ever gets lighter in shade. With a closer look at its viking helmet, you’ll be able to notice a chipped paint of gold. The specific part of the figure also feels rubbery especially on the pointy edges as they bend slightly when moved.

Upon looking at its facial features, the paint job looks really cheap and inaccurate. The texture of the paint feels visually rough and messy. You’ll also notice that the paint on its eyes are already worn out, if that matters at all – well, it does. 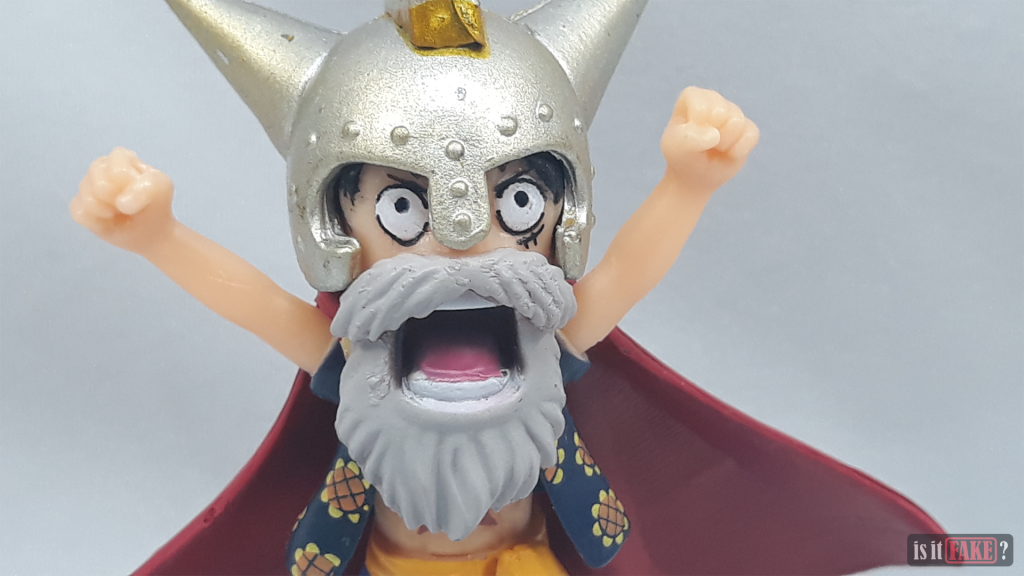 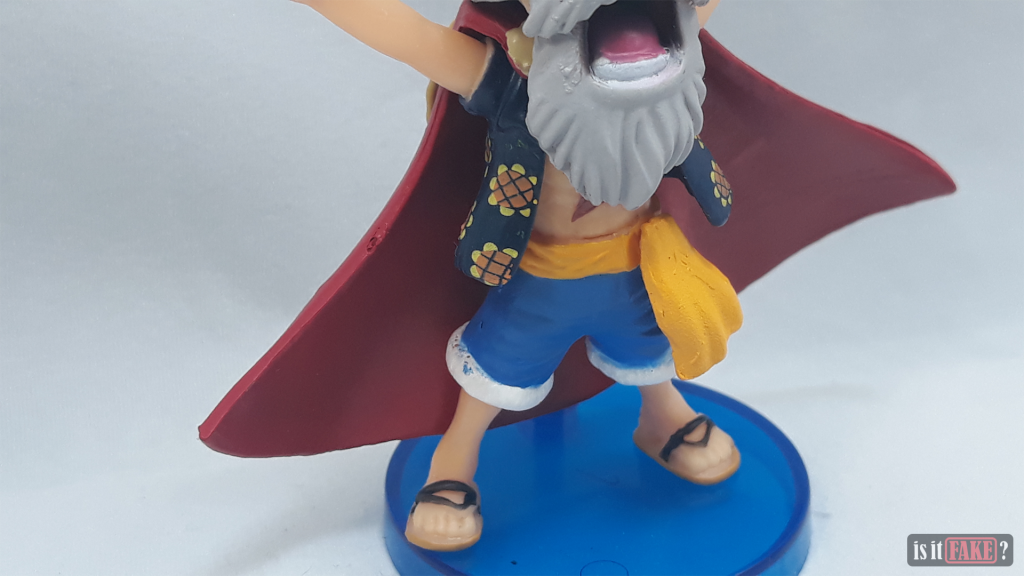 View of the fake figure's body from the left 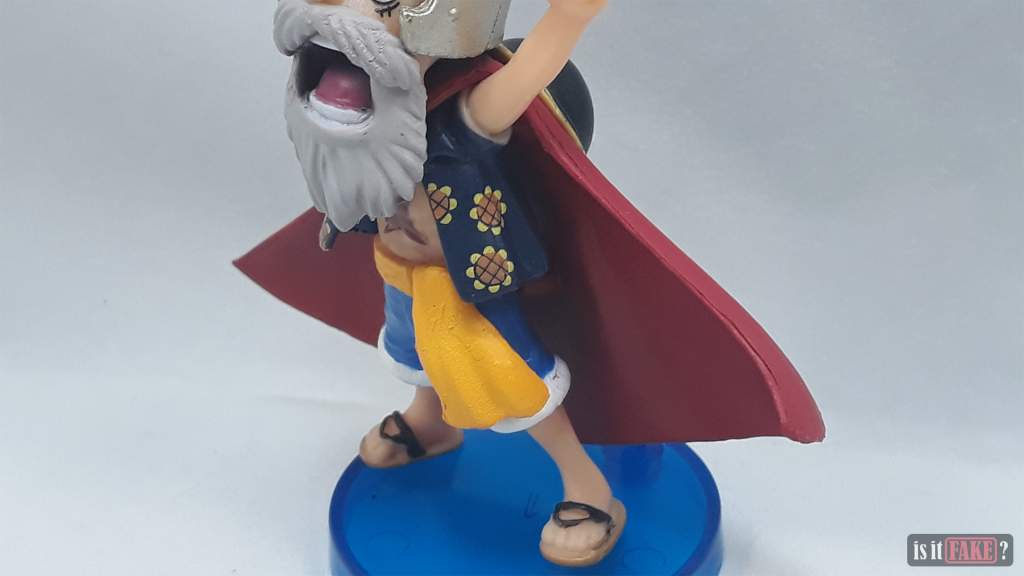 View of the fake figure's body from the right 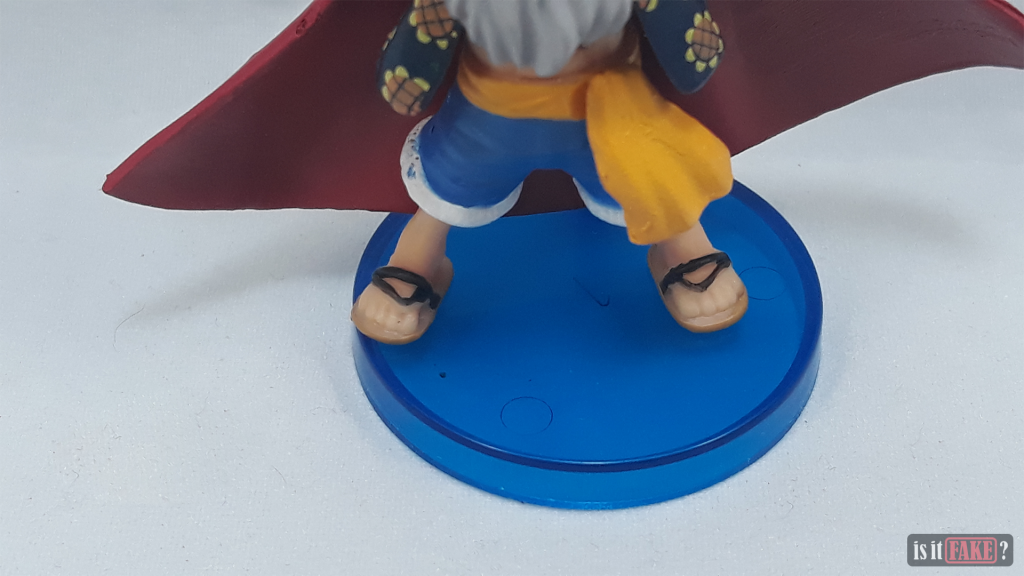 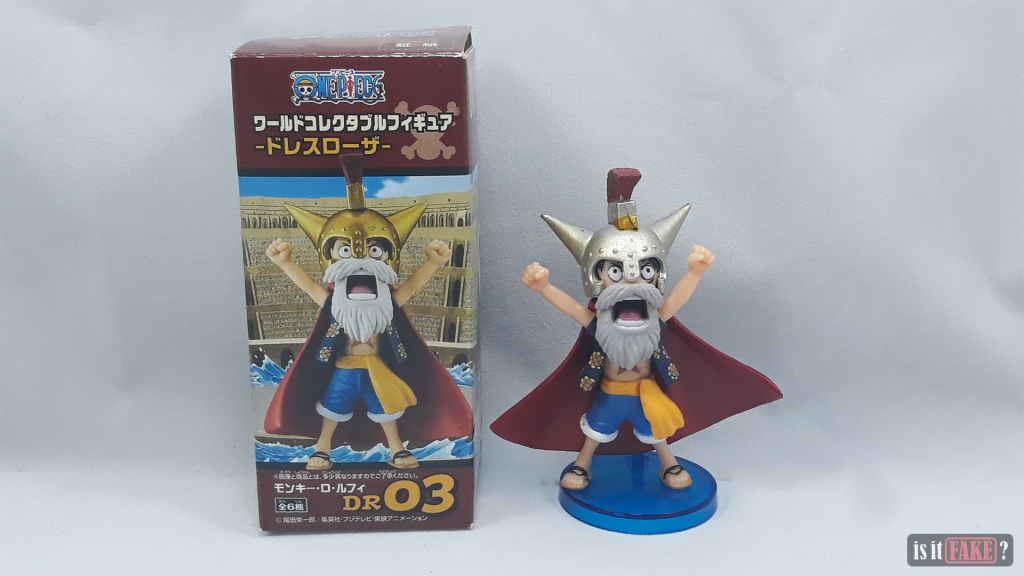 A comparison between the box's art and the fake figure

The beard of this fake Gladiator Lucy has some undesirable rough texture on it which appears as molten surface. Its mouth, on the other hand, looks cloudy with a hint of a sloppy paint job on its teeth.

The fake figure poses with a lot of inaccurate details, and molten surfaces. We could definitely say that this bootleg is a force to be reckoned with as it would stand out as a laughing stock among a collection of other figures. These flaws certainly tells a lot about how bad the figure is, and that is what you should not be getting. 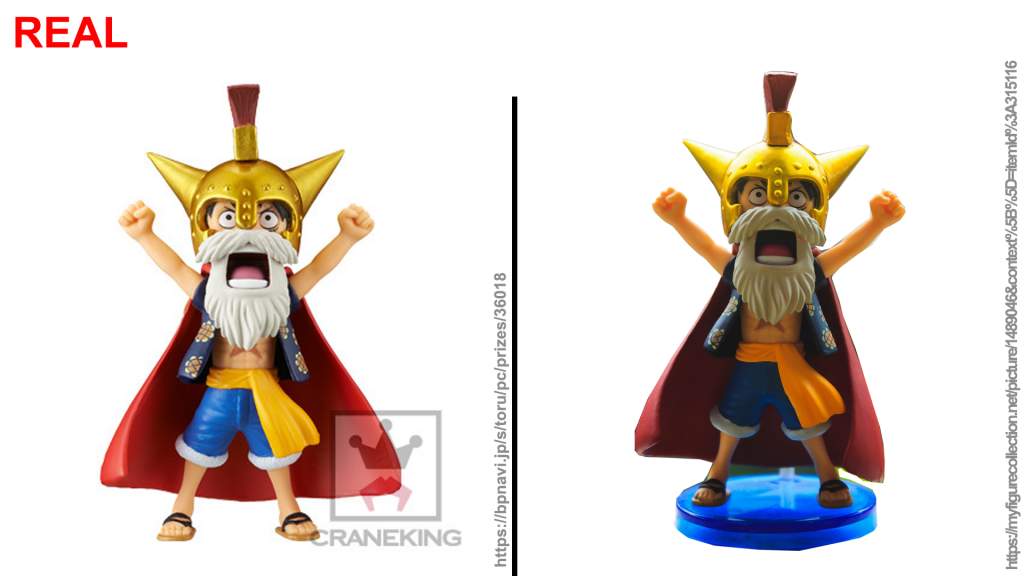 Even just putting the fake beside the box, you could already tell all the difference between the real World Collectable Figure: Gladiator Lucy and the bootleg. But putting the real figure in action, its details are surely worthy of attention even for a miniature figure.

The real World Collectable Figure: Gladiator Lucy has a matte finish. The paint job is much spot on, although as expected for a lesser-detailed mini figure, there are a few obvious set back. Nonetheless, the real figure fits the very description of Gladiator Lucy in the anime, and deserves a sole spot in a fan’s collection.

The fake World Collectable Figure: Dressrosa collection was bought off for a whopping $17.40 USD. To put that into perspective, a set of six authentic World Collectable Figure is valued between $30 to $50, even less if the figures are already dated, and of course, the prices also depends on the demand since most WCF are obtained boldly by luck. So if you’re planning to spend at least half of that for a half-baked figure, then you’d better just save it to buy the real figure instead as you’ll just be disappointed on the bootlegs.

WHERE TO GET THE REAL WORLD COLLECTABLE FIGURE: GLADIATOR LUCY

The World Collectable Figure: Dressrosa collection as we know it may already have been sold out from renowned online anime stores. Considering that the collection was released back in 2015, it’s as expected that such figures are already out of stock. However, it won’t stop you from getting this brilliant pose of Gladiator Lucy, will it?

We found this Figuarts ZERO Gladiator Lucy figure still available on Solaris Japan even though it’s a relatively dated figure. The figure costs around $58 – you might think that’s a lot considering we were just talking about affordable the World Collectable Figure, but if you’re eyeing for this specific pose of the disguised Monkey D. Luffy, then you should go for it!

World Collectable Figures by Banpresto are pretty rare on the web since they are exclusively obtained from cranes, and other games in Japan. You’d be lucky enough to find a couple of sets from trusted anime stores.

Fortunately, the World Collectable Figure: Whole Cake Island collection on Amiami. The One Piece arc featuring a new look on the Strawhat Pirates – including a bloated Luffy and Chopper – just concluded this year moving on to a new one. The whole collection only costs around $16 which kicks the bootleg’s price really hard considering that the fake is a dollar more expensive.

Regardless of prices, some bootlegs do go over the retail price of authentic items, and that’s absolutely infuriating. Whether fake items may be cheap or not, we should refrain from buying such items as they’re not only full of defects, but they also ruin the image of esteemed, creative manufacturers.

The fake World Collectable Figure: Gladiator Lucy is truly a ridiculous imitation. The fake figure is full of damages considering it’s only a miniature figure. The bootleggers are definitely careless in doing the paint job for this small figure. And lastly, its price is pretty absurd if you’re going to look at it as the whole fake Dressrosa collection.

It’s just a hideous figure. For that reason, it slides down with a 90% awful rating.