Being sent to another world can be shocking especially when you’re just a group of kids who are still finding your way through puberty. Top it off with being fated to be saviors of a completely uncharted Digital World, Tai and his friends had it rough in Digimon Adventure.

Although the young DigiDestined were clueless at first, they were guided on how they can battle out evil in the Digital World. With the help of their sole companions, the Digimon, they were able to pave their path to searching for powerful crests that will help each member with their growth. Upon getting stronger, they’ll be able to save the Digital World and return to Earth.

The anime Digimon Adventure was the first season to showcase Digital Monsters that became immensely popular as countless of merchandise were sold out. Apart from Digimon merchandise, the anime itself was also one of the highly regarded anime making it a continuous saga even after 20 years when it first aired.

There’s no doubt that another popular series have been taken advantage by toy pirates. They would do anything so that they could get their hands on easy cash that’s the same as robbing from famed manufacturers like Bandai. As seen on this fake DigiDestined Crest of Hope necklace, the notorious bootleggers are once again prowling for an easy prey.

Determined collectors usually have keen senses and would deny any fake they see. For that reason, legit online stores make it known who they are affiliated with, whether it’s a well-named toy manufacturer like Bandai or Takara Tomy. Unfortunately, vendors from shady websites like AliExpress won’t even dare to mention that their product is authentic, because they don’t really mind that they are selling lousy bootlegs.

The fake DigiDestined Crest of Hope is a good example of these toy bootlegs from AliExpress. The seller even posted zoomed in pictures of how bad the products are, and they couldn’t care less on how openly they’ve been breaking the law.

Regrettably, such fake items circulate around the globe, and it is up to every fan and collector if they will be giving in to buying cheap, defective items. You should be stepping away from bootleg collectibles once you take a look at this fake DigiDestined Crest of Hope.

As a fake accessory, it was partly surprising that this fake DigiDestined Crest of Hope pendant have its own packaging. Regardless of how it’s presented, it was evident enough on the packaging itself that this item is definitely to be kept away. 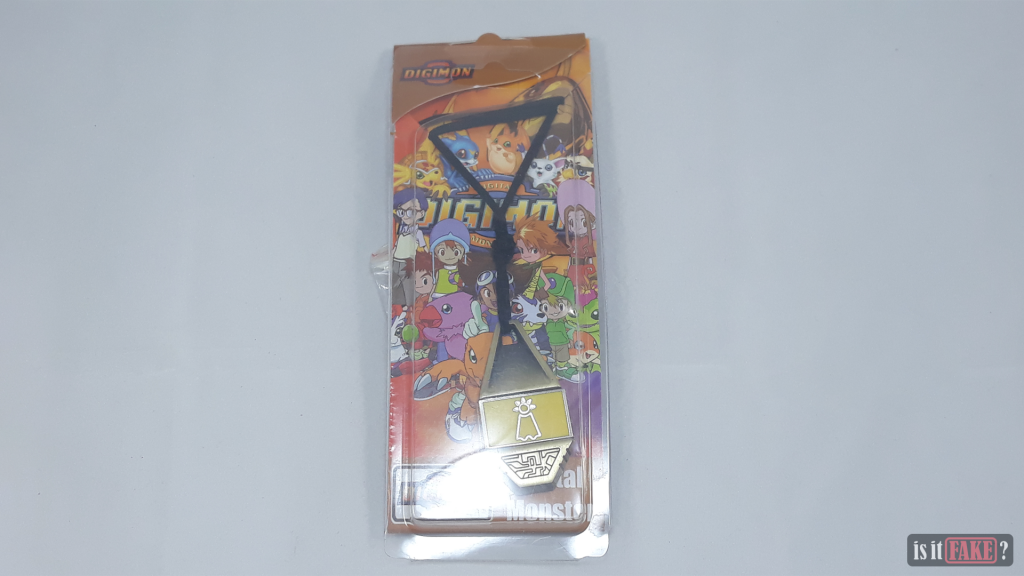 The fake DigiDestined Crest of Hope in packaging 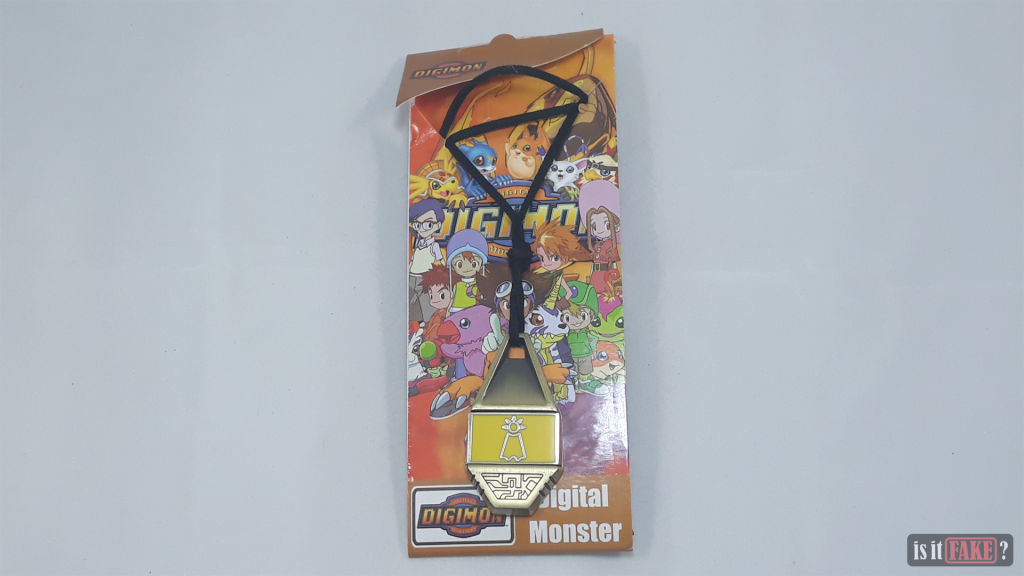 The fake accessory in packaging 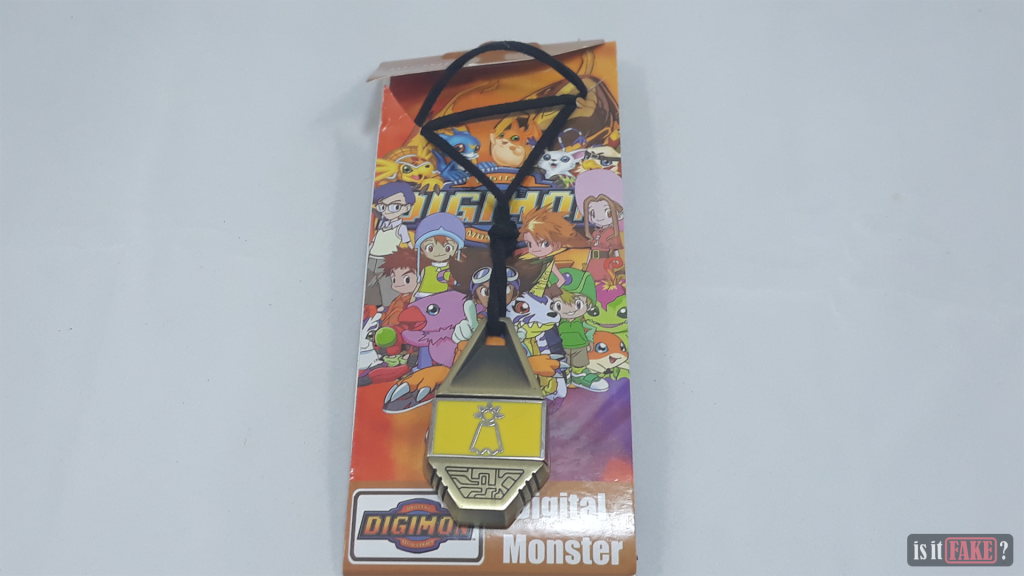 Close up on the fake accessory 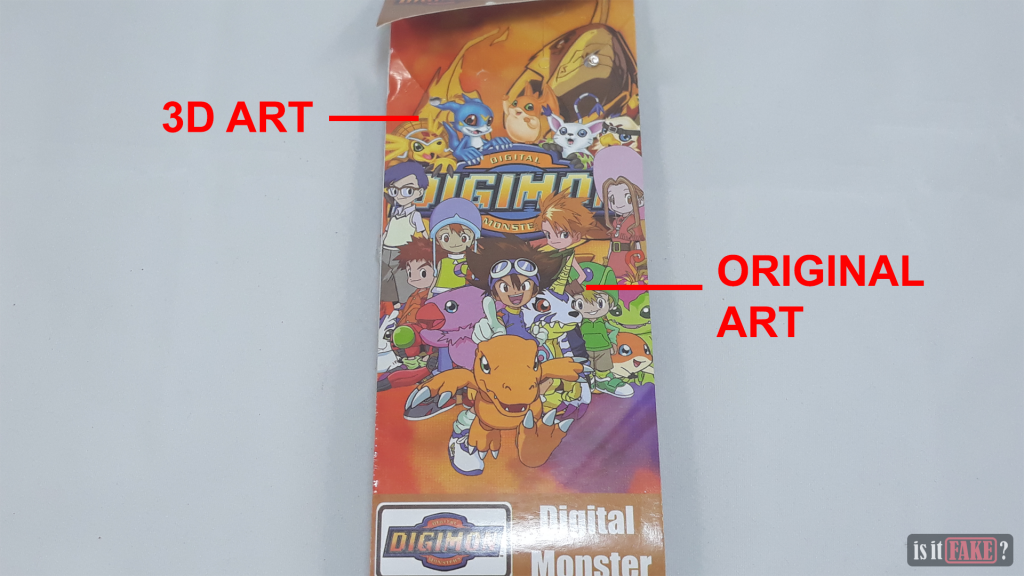 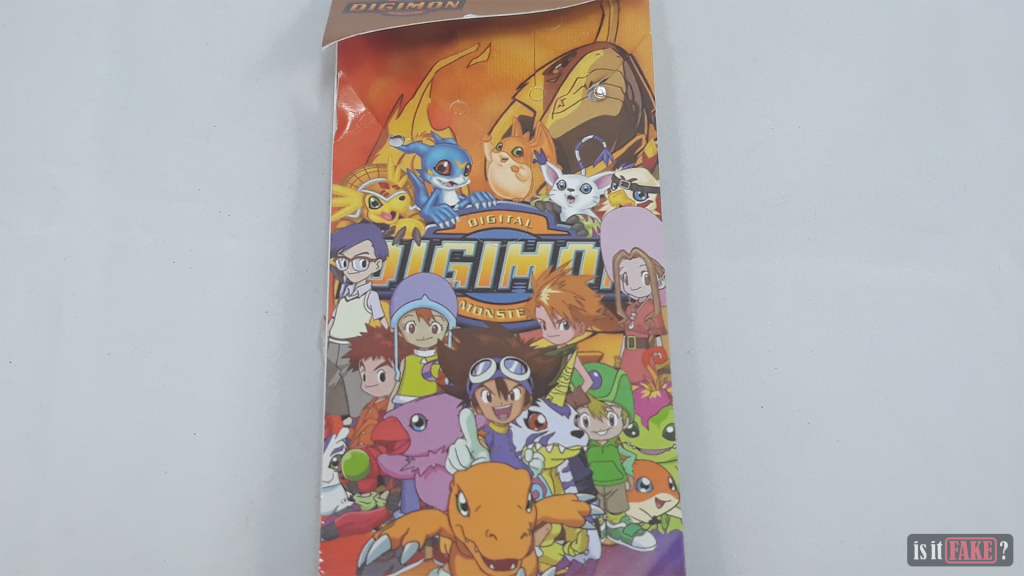 Close-up on the packaging artwork 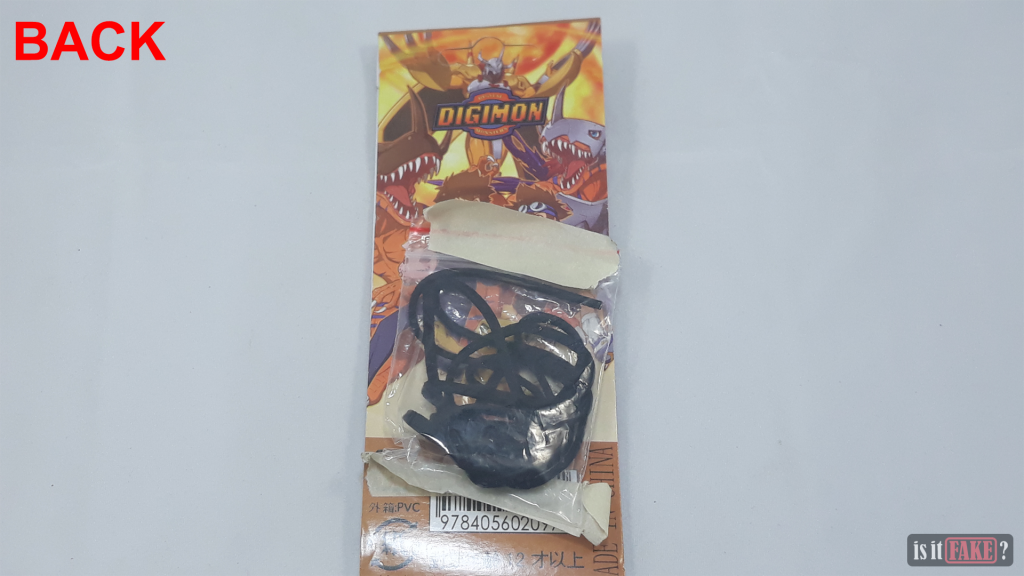 The back portion of the packaging 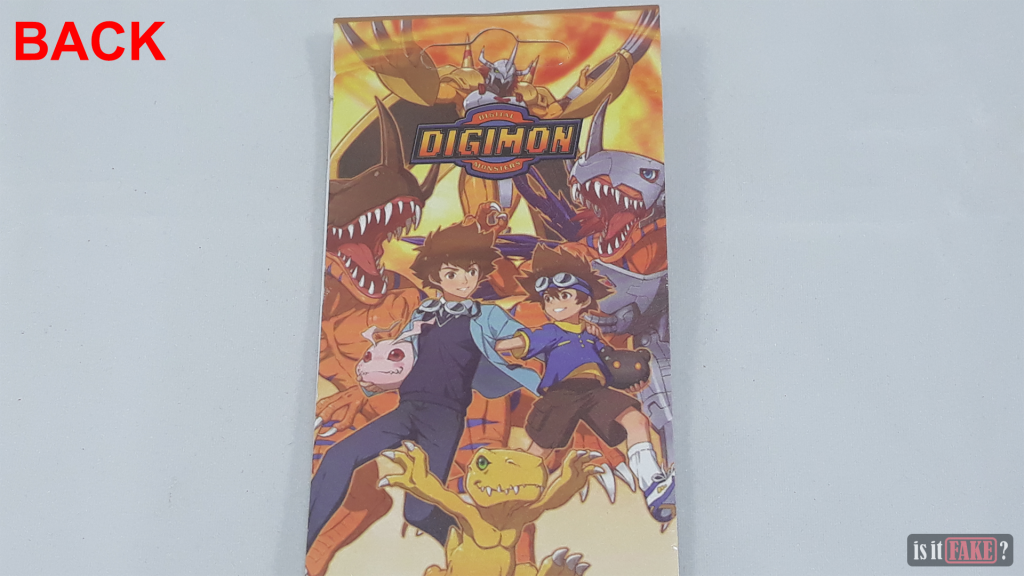 Close up on the back portion's artwork 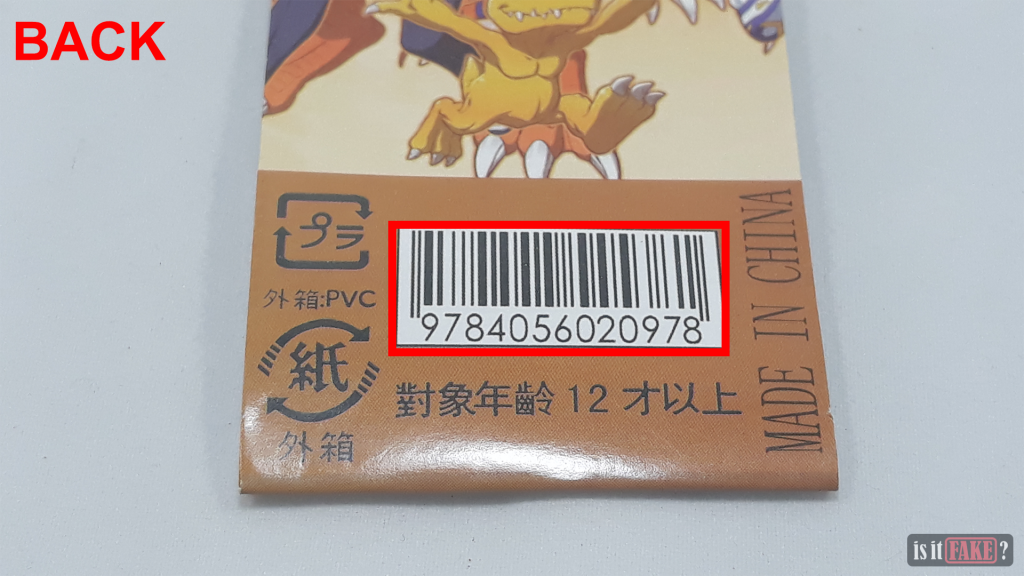 Close up on the packaging barcode

As you can see, the pendant is sealed between a plastic casing and a printed cardboard. It’s funny how it’s only half-sealed, not to mention the cardboard has a color-faded print of the Digimon Adventure.

The art looks inconsistent as the Digimons on the upper part of the front print looks 3D-ish compared to Tai and his friends below. A more hilarious scene is unveiled once you turn the printed cardboard over – an art of Tai and his future self from the anime Digimon Adventure Tri which was released last 2015. Judging from the erratic drawing, it looks like that it’s a fanart.

Looking away from the annoying printed cardboard once and for all, you’ll be able to notice that there’s a barcode and an extra lace in plastic that’s taped at the back. As expected, the barcode doesn’t have any data and looks like that it was only added for face value veiled with trickery. 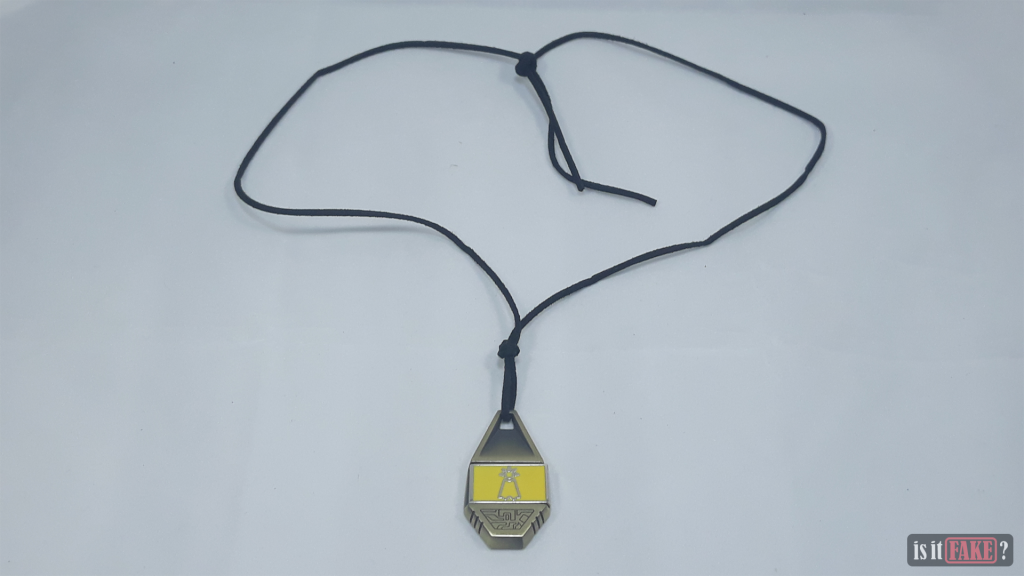 A full view on the fake DigiDestined Crest of Hope necklace 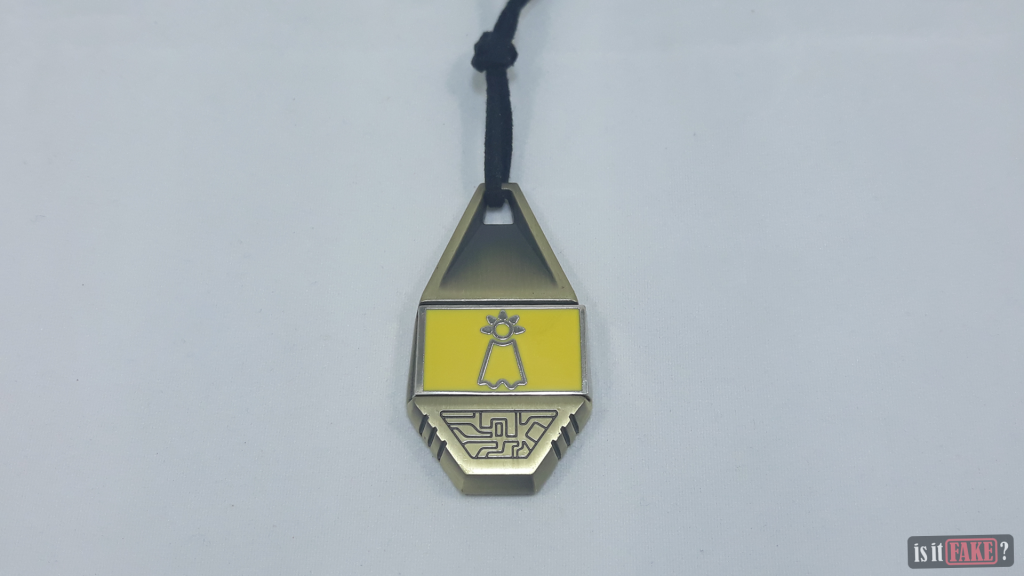 A close view of the fake pendant 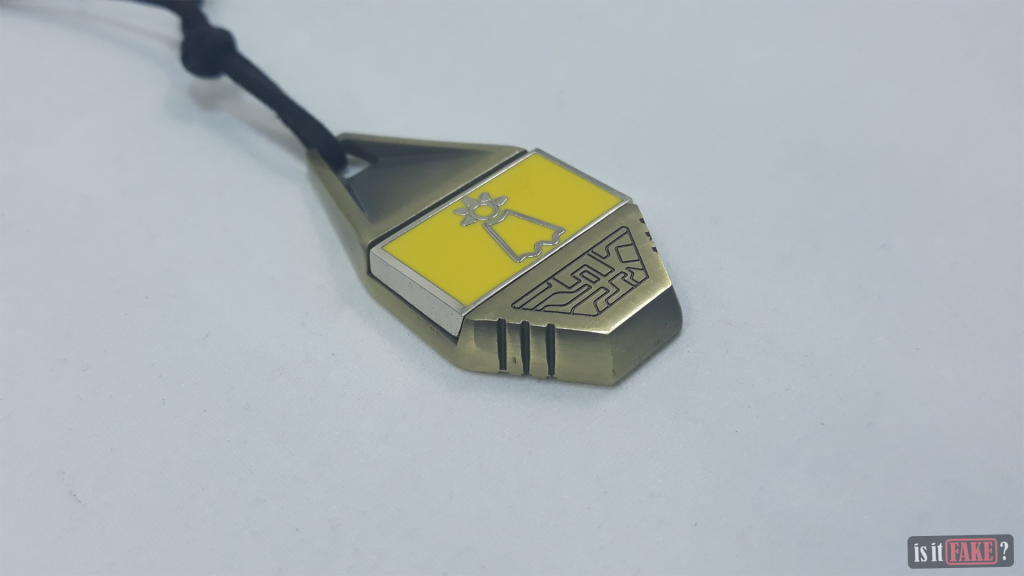 A view of the fake pendant from its left 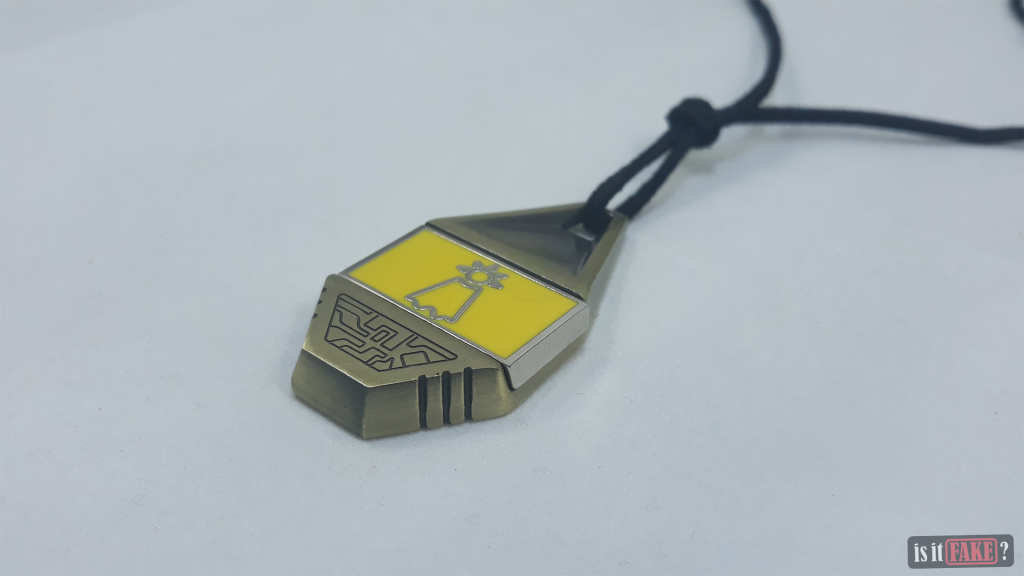 A view of the fake pendant from its right 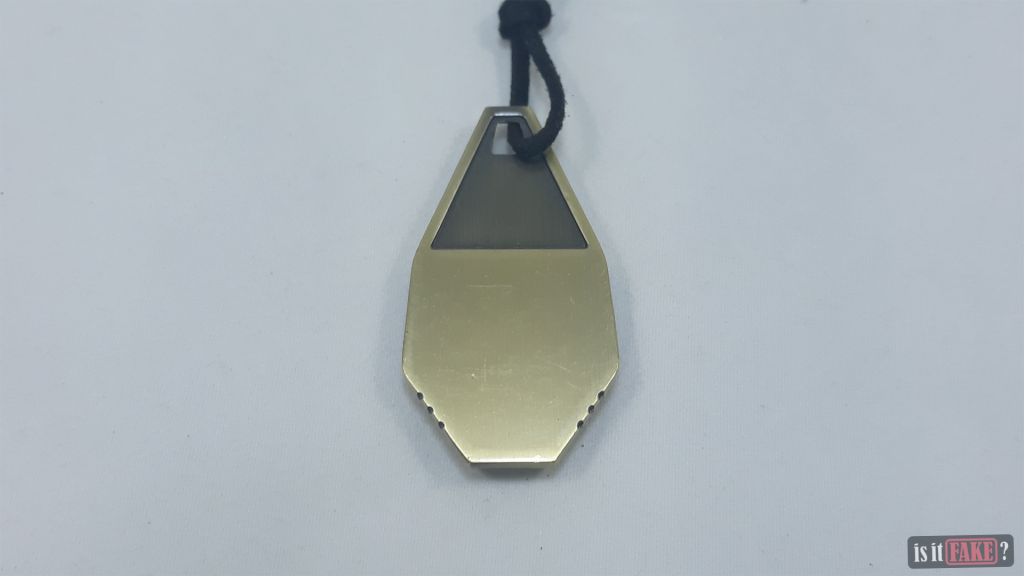 The back portion of the fake pendant 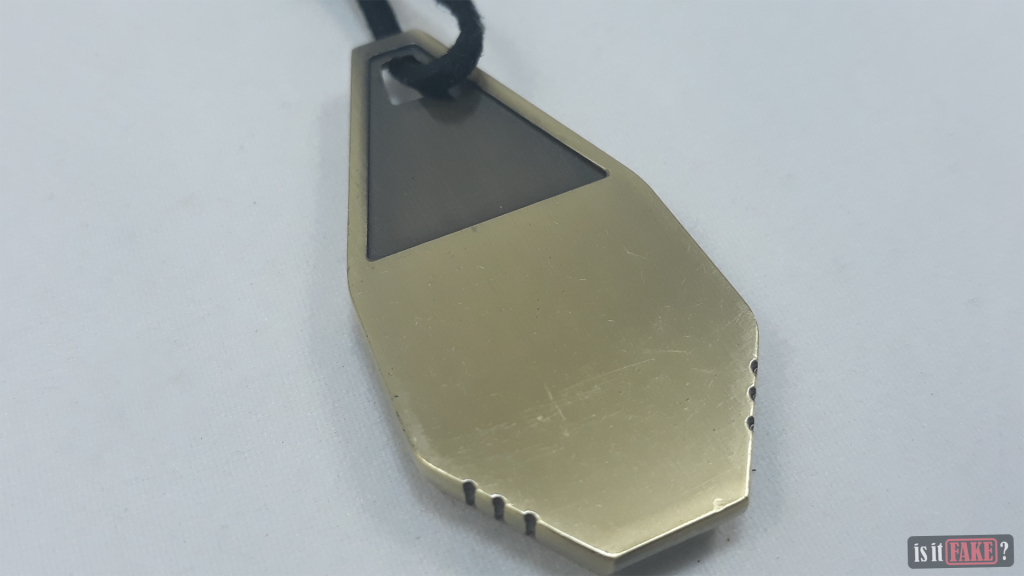 A closer view of the fake pendant's back portion 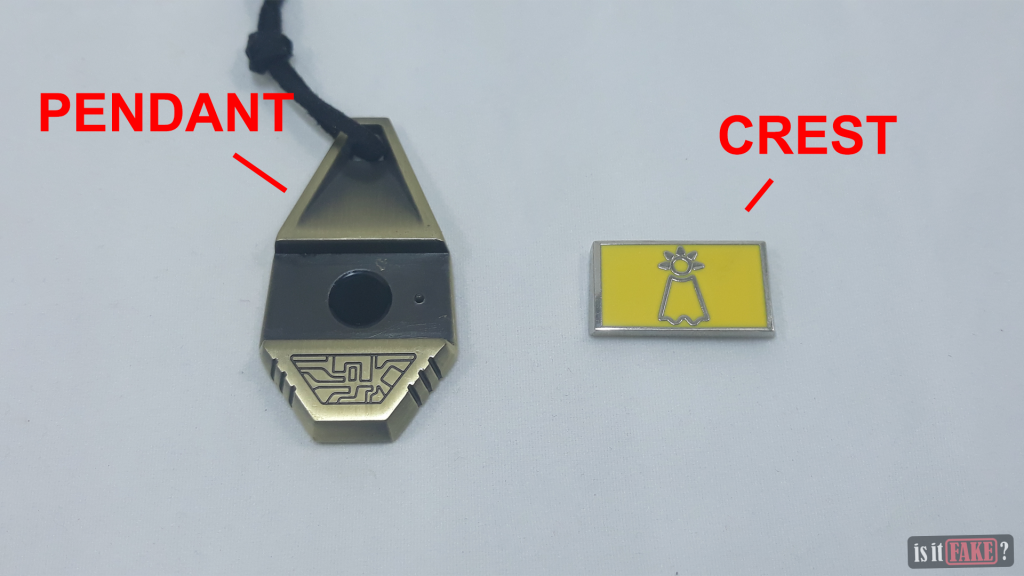 The fake DigiDestined Crest of Hope detached from the pendant 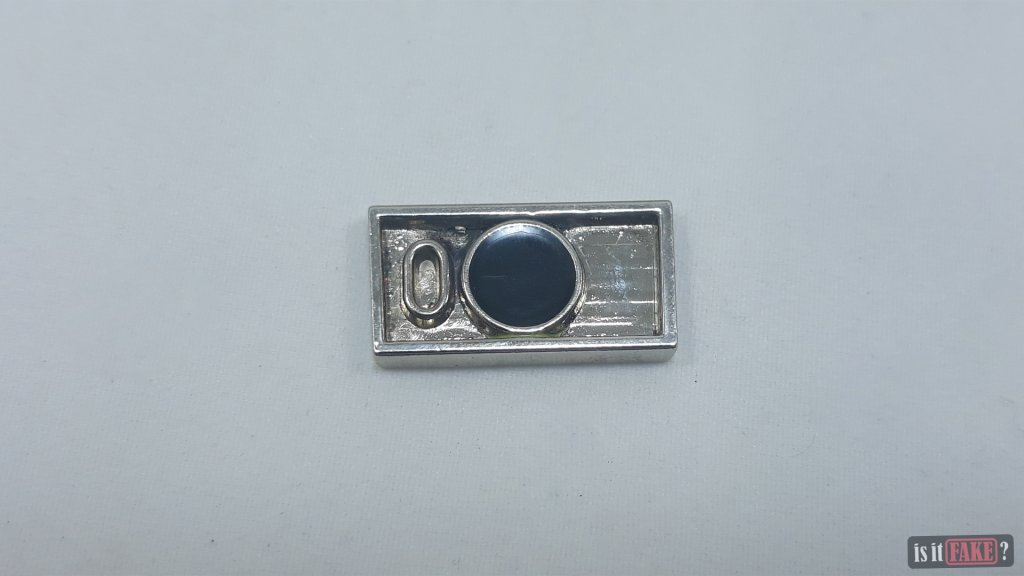 The back portion of the fake crest 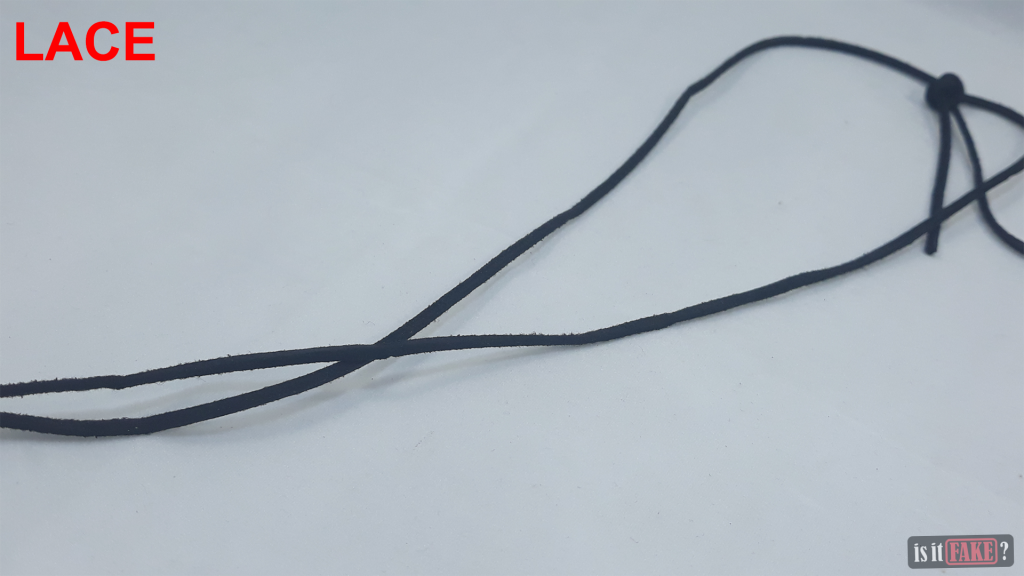 The lace of the fake item 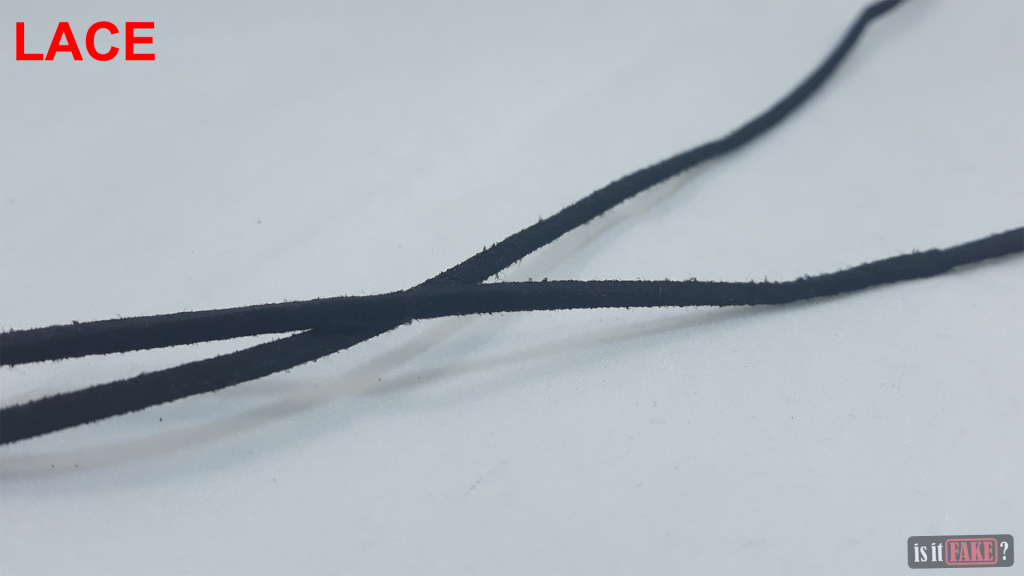 A closer view on the lace

The fake DigiDestined Crest of Hope pendant’s made from carved metal. The crest is attached to the main pendant by magnet so that it just slides off conveniently. The front of the crest shows the symbol of hope based from the anime. You’ll be able to spot the difference between this symbol and the actual symbol. While at the back of the crest, however, you could see dark markings around the magnet area.

To be fair, the makers of this fake item did some effort on the pendant with its carving and the material itself looks credible. Although there are only a few defects that could be spotted, this Crest of Hope pendant still doesn’t pass the standards of Bandai in making the real DigiDestined crests. 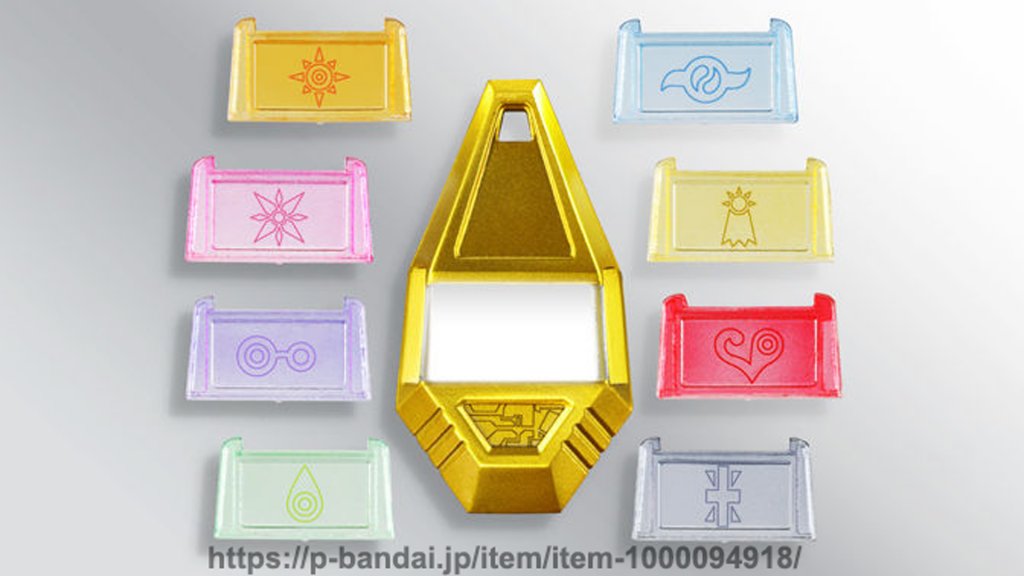 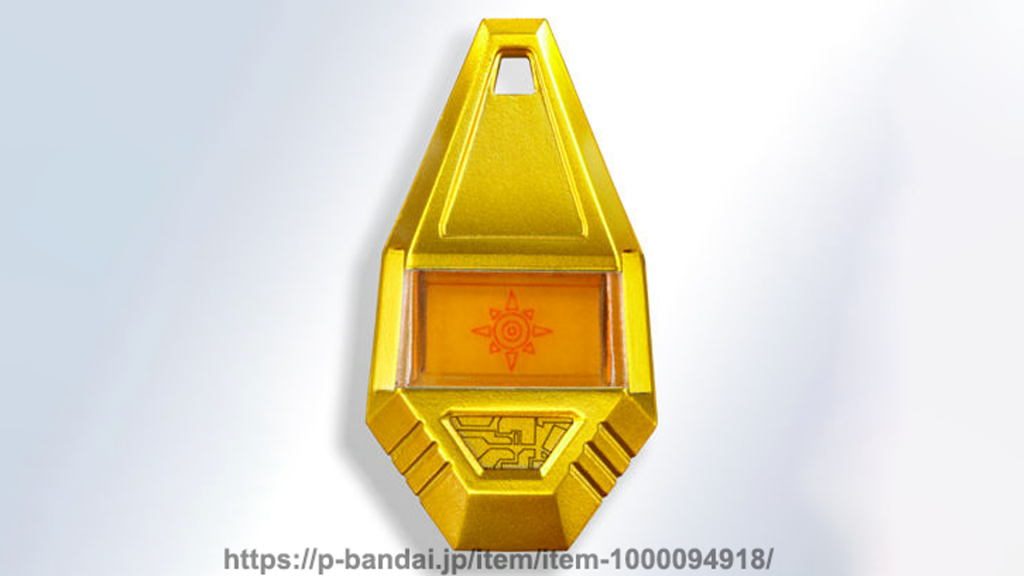 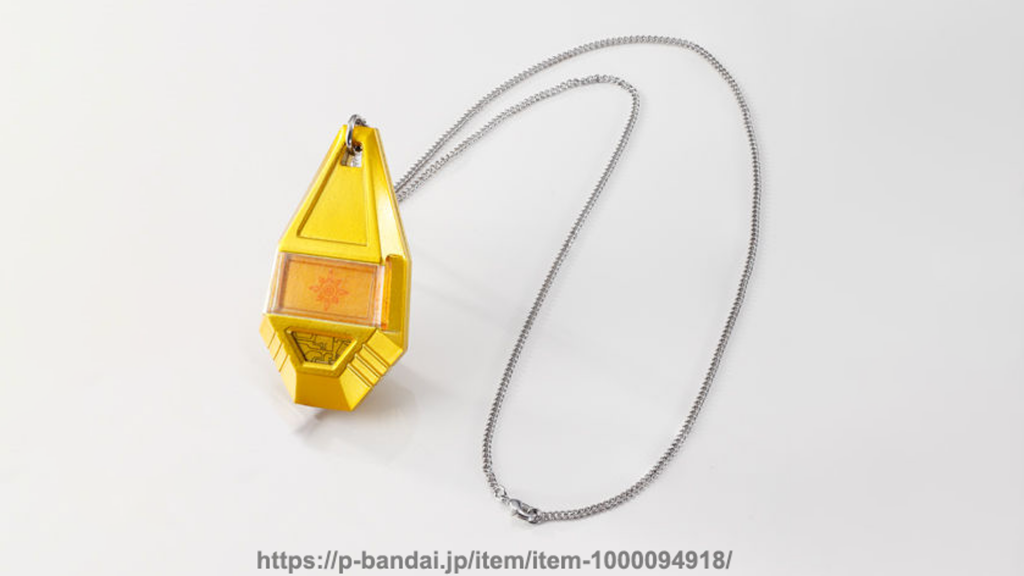 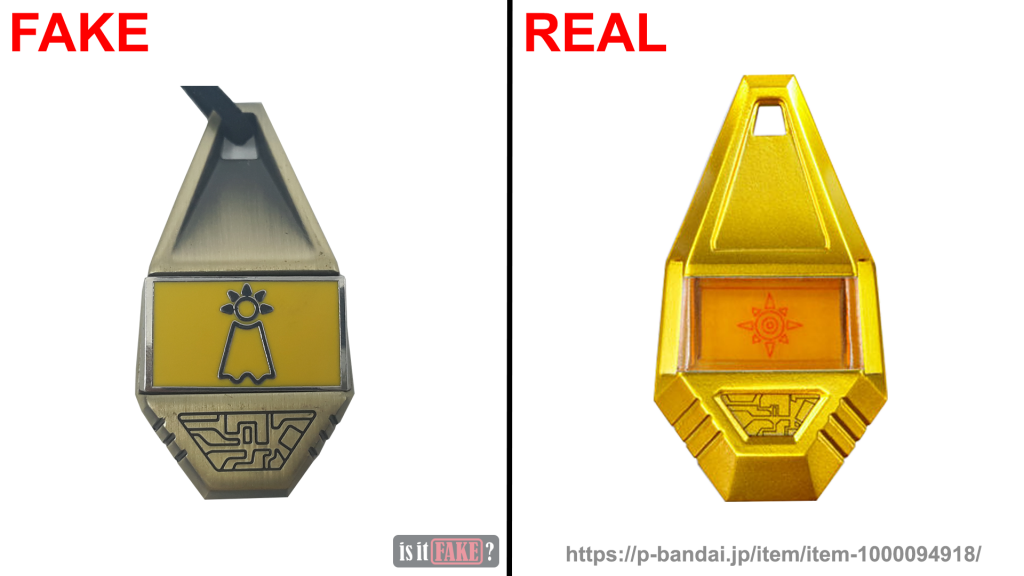 Fake VS Real of both accessories 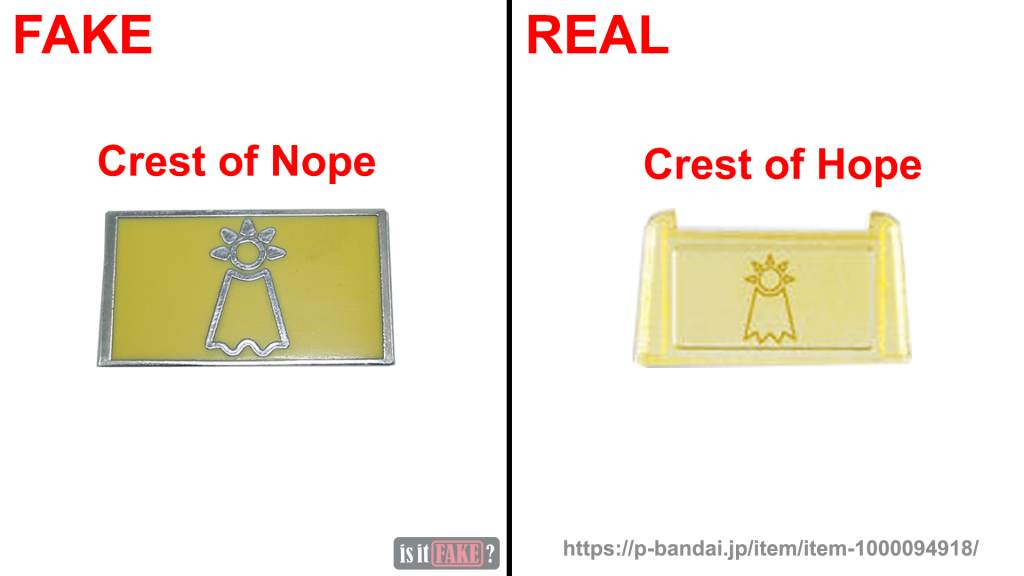 Fake VS Real of both crests

The real pendant looks like it was carved thoroughly to look exactly the same as it was in the anime. The crest is protected by glass, and could easily be swapped from one to another. The necklace also followed a modern trend making the accessory stylish in a sense.

Looking at the real DigiDestined Crest’s pendant, you’ll be able to notice a difference on the carving between the fake and real item. The lower carve as you’ll see on the fake’s pendant, the digital imprint as it seems, look a lot different from the real one.

Attention to detail matters a lot especially for fans of Digimon Adventure. Unfortunately, this fake DigiDestined Crest of Hope degrades the value and hard work of Bandai by making bootlegs of such accessories. In the long run, an accessory that’s made from precious material would definitely be worth keeping, but needless to say, this fake DigiDestined Crest of Hope won’t be able to get past a month unsealed. Then again, staying away from cheap accessories will be the best choice especially when you encounter a fake Digimon Adventure accessory on the web.

There are a lot of accessories that are made based from a popular anime. If they’re not branded by an authorized licensee, then they could properly be called fakes – or imitations as what they say. These items are made effortlessly out of ideas from other people, and what’s bad about it is that it was made without permission, thus prices are much cheaper, and the quality suffers with it.

The fake DigiDestined Crest of Hope may sound bearable since it’s only $2.66 each. However, the whole purpose of getting an accessory inspired by Digimon Adventure is completely defeated since you’ll only be buying an obvious imitation. Not only that, it underestimates the worth of the wearer – the same as wearing fake, classy jewelry. If you’ll at least be showing off, then you’d better go with the official and authentic DigiDestined Crest.

The real DigiDestined Crest, as we’ve mentioned, come with a set of 8 crests. For around $44, it’s absolutely a reasonable price considering that you’re getting a branded luxury. Whether you’d be wearing it for cosplay or just on a normal day, you’d be wearing a guilt-free, stylish accessory on you. Even if you won’t wear it, then you still got yourself a collector’s item.

WHERE TO BUY THE REAL DIGIDESTINED CREST OF HOPE

If you’re looking for the real DigiDestined Crest of Hope, you might want to try your luck with Japanese websites. Although for a collector’s item that’s released four years ago, it could be as well out of stock already.

You can still take a good look of the item on Bandai Premium Japan’s online store. However, reservation of the item has been long over from this website, and the only chance to get your hands on this awesome pendant at the same price, possibly, is to visit a physical store in Japan.

You might be surprised as to how the price skyrocketed years after the product’s release. It’s exactly what it is – a collector’s item, and a number of sellers labeled Japan, surprisingly, still have stocks of the item on Amazon. Judging from a reasonable amount of reviews, it looks like that the item is packaged by Bandai.

For $224 USD, it is indeed an expensive amount to shell out for an anime-inspired accessory, but considering that it commemorates Digimon Adventure’s 15th anniversary, it makes sense that this item will be much in demand.

If you’ll be searching for cheaper prices on Amazon, then you’re bringing yourself up on a rough ride as there are numerous bootlegs as well as “customized” items that still go around the website. It’s best that you refer on our link instead.

The fake DigiDestined Crest of Hope is absolutely an item that any Digimon fan should stay away from. It’s completely deteriorated and doesn’t hold any value as an accessory. It disregards any detail from the anime making it a bearer of hopelessness and discouragement. You wouldn’t be able to show this fake necklace off to your peers, and worse, you would even be embarassed to own such austerity.

This fake pendant truly deserves a hammering 85% terrible rating for its bad condition.