While Godzilla has never really gone away, the King of Monsters has been experiencing a – pardon the pun – resurgence as of late. After Hollywood’s failed attempt to reimagine the behemoth in 1998, Gareth Edwards reintroduced Godzilla to the West in 2014 in a manner that was not only explosive, but also faithful to the source material. This gained the admiration of both fans of American cinema and Japanese kaiju enthusiasts.

Inspired by the 2014 movie’s success, Toho brought the behemoth back to Japan with 2016’s Shin Godzilla. But Godzilla fans weren’t the only ones excited for the beast’s return to the land of his birth. Movie pirates were quick to snatch copies of any leaked videos of the movie they could get their hands on… resulting in atrocities such as this fake Godzilla Resurgence DVD we’re reviewing today.

We acquired our Godzilla Resurgence DVD from a shady-looking stall selling numerous pirated DVDs and a handful of other items. Sellers of fakes are easy to spot; they’re usually small and cramped, with walls adorned from floor to ceiling with cheaply packaged fake DVDs. Some such stores are found in malls, others in markets. You can even find a few of them on the streetside. Fake DVDs are sometimes labeled with the names of the groups responsible for their piracy. In the case of this counterfeit Godzilla Resurgence DVD, that group is Abdul Jabbar Production, whom we already discussed in a previous article.

There seems to be a second group called KING, who announce themselves in a short video intro before the movie itself begins. Further investigation, however, reveals this video to be a generic intro apparently created by a video editor on YouTube. This and other similar videos are being circulated on the internet for free use by anybody wishing to give their own works a fancy-looking intro. It’s therefore possible this intro has been used in illegal products without the editor’s knowledge. As for the DVD cover itself, it’s nothing but paper. The front cover features official artwork, most possibly taken from the Shin Godzilla website or Facebook site. The fake’s print quality isn’t great. The colors are washed-out, with faded blacks and muted warm colors. In contrast, the official image has deep blacks, while the red and orange accents pop out, giving Godzilla a frightening, “fire and brimstone” look. While Shin Gojira was initially marketed towards American audiences as Godzilla Resurgence, it was eventually retitled Shin Godzilla. This fake DVD’s title, Godzilla Resurgence, is therefore a throwback to the time before its official release outside Japan, which in turn further confirms its nature as a bootleg.

The artist behind the fake cover designed their own Godzilla Resurgence title using a boring, generic-looking font and color gradient. Compare this to the English Shin Godzilla title, which you can find on any promotional material about the movie’s official English language release. As you can see for yourselves, the official title is monochromatic, but boasts an artistic and exciting design.

The fake version is also accompanied by two preposterous claims. The first states the movie is 3D, while the second says the disc includes “both unrated and theatrical versions.” We shall discuss this further below. But first, let’s examine the fake’s back cover. 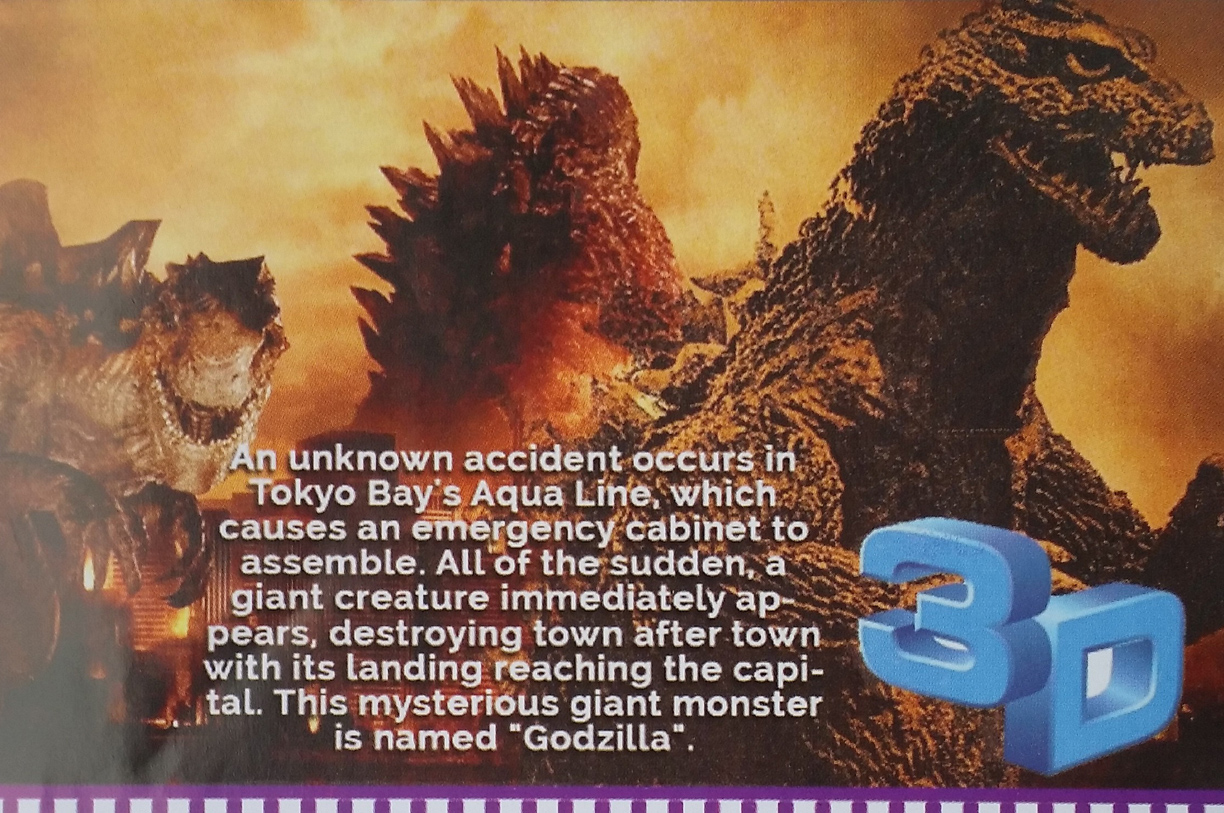 Close-up of synopsis on the back cover, with three Godzillas 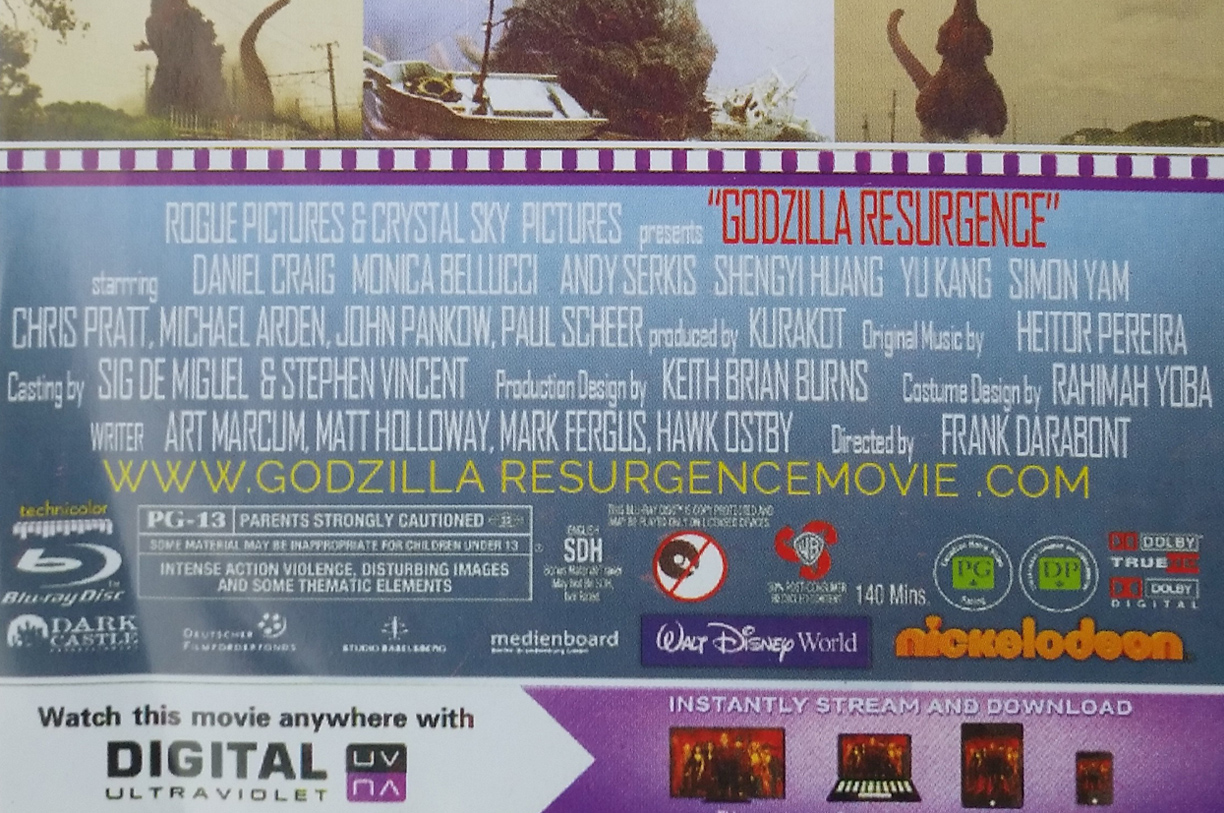 The artwork on the upper portion of the back cover is odd, because it doesn’t show the Shin Godzilla version of Godzilla. Instead, it’s a composite of three versions of the leviathan from three different cinematic eras of the franchise.

The one on the extreme left is the “iguana/frog/lizard” Godzilla from Roland Emmerich’s much-maligned 1998 movie, Godzilla. You’ll find few fans of this incarnation of the monster in Japan (or anywhere in the world for that matter); even Toho had it trademarked as “Zilla” to distinguish it from the real Godzilla/Gojira. To have this creature plastered on the back cover of the Shin Godzilla movie would be an insult to Japanese Godzilla fans.

The middle Godzilla is the version from Gareth Edwards’ critically acclaimed 2014 movie, while the one on the far right is the classic Japanese Gojira.

Below this composite image is the movie synopsis, which was taken from IMDB’s Shin Godzilla page.

Further below on the back cover, we’re treated to a bunch of bogus details about the movie.

First of all, American companies Rogue Pictures and Crystal Sky Pictures have nothing to do with the movie’s distribution outside Japan. Secondly, Shin Godzilla features an all-Japanese cast; Daniel Craig, Monica Belluci, Andy Serkis, Chris Pratt, and all the other actors mentioned on the back cover don’t appear in the film. Shin Godzilla wasn’t directed by Frank Darabont, but by Hideaki Anno and Shinji Higuchi. The details list other names – such as Heitor Pereira, Keith Brian Burns, Art Marcum, and more – none of whom were affiliated with the movie’s production team in any capacity.

The link www.GodzillaResurgenceMovie.com is now defunct, perhaps because of the movie’s rebranding as Shin Godzilla.

We even see the logos of various renowned American entertainment companies and networks, namely Disney, Nickelodeon, Dark Castle Entertainment, and Warner Bros. Again, not one of these companies are involved in Shin Godzilla’s distribution outside Japan.

Other details suggest the fake is a Blu-Ray disc boasting Dolby Digital sound. But this, as we shall see, is nonsense. 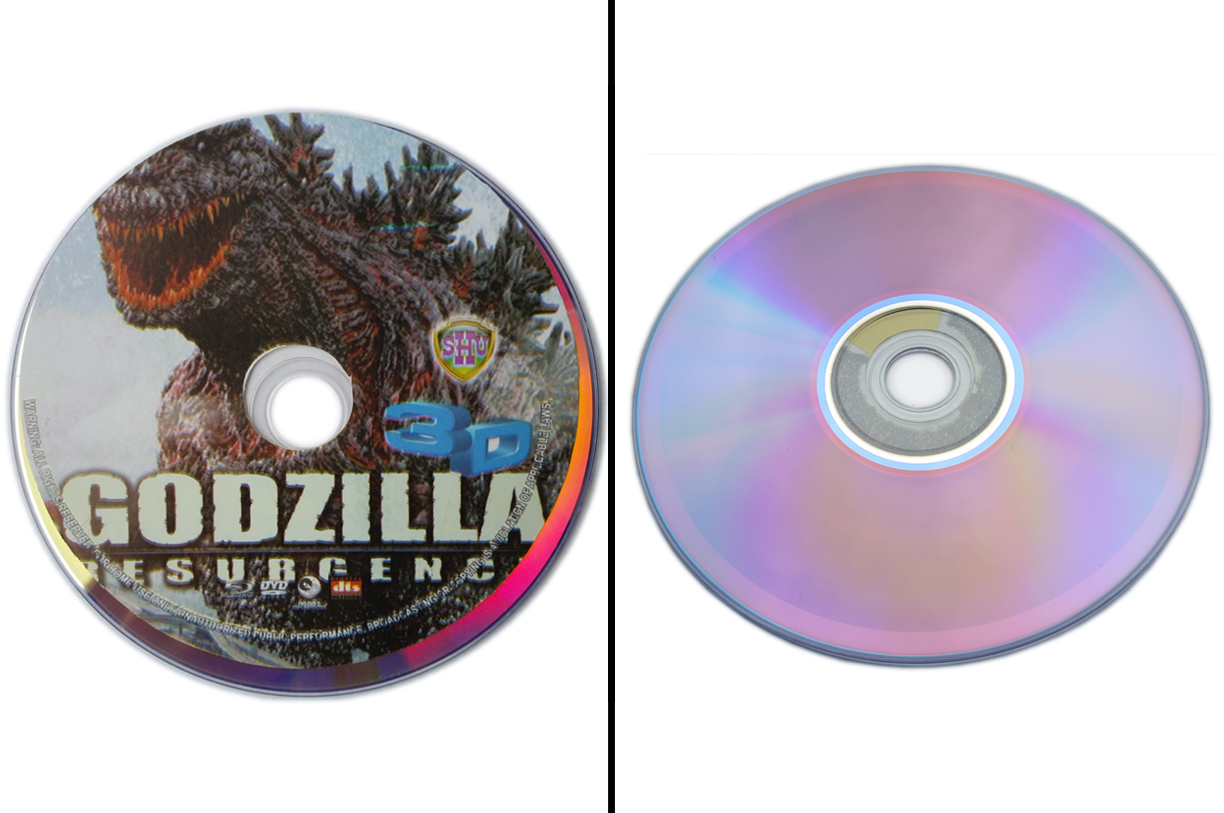 The single DVD disc is sheathed in a delicate cloth jacket.

The printing on top of the disc is not centered and covers a portion of the inner hub. Thankfully, our DVD player had no troubling reading the disc, and our media player ran its files just fine.

The sight that greeted us once the video started was hugely disappointing, but not surprising. The DVD launches with an ugly, messy menu screen. The background image is squashed, so that Godzilla has a flatter head and a weirdly proportioned body, and all the tanks and helicopters look thinner than they’re supposed to be. The placement of the “Play Movie” and “Chapter Menu” buttons seem haphazard. The made-up Godzilla Resurgence title design isn’t even consistent with the one on the fake’s front cover.

The chapter selection menu is just as appalling as the main menu; the words in green and purple are barely visible amidst all the garish colors.

The movie begins with the aforementioned KING intro.

The video resolution is an off-putting 640 x 480. You can enlarge the video to full screen, but the picture only becomes more blurred. Worse, the aspect ratio is off, so that the video is squished, giving all the actors unnaturally long, narrow faces.

The video is hardsubbed. The English subtitles provided by Anthony Kimm seem official.

But here’s where it gets really upsetting. This fake Godzilla Resurgence DVD isn’t even the full Shin Godzilla movie. It’s a rip of a leak of a preview of the film, so what we basically get is an incomplete movie with over 20 minutes of footage missing.

And thus we return to the claims made on the front and back covers of the fake.

First, the fake is not a Blu-Ray as stated on the back cover; neither does it support Dolby Digital sound.

Contrary to what the text on the front cover says, the video is not 3D, so you’ll have no need for 3D glasses. Additionally, the DVD doesn’t contain two versions of the movie, but only one. As stated previously, this single video is a leak and not the theatrical release, so once again, the text is wrong. But the text does get one thing right: since this is a Shin Godzilla preview rip, it is an unrated version of (a part) of the film.

The group potentially responsible for the rip was Hidden-Movies, whom German anti-piracy company comeso GmbH recently took down. The DVD and Blu-Ray of Shin Godzilla are already available in online stores. While they’re more expensive, you can be assured you’re getting a complete movie – one with great video and audio quality, at that.

You can buy the English language Shin Godzilla DVD or Blu-Ray from Amazon. There’s even a DVD and Blu-Ray + UV combo. Make sure to purchase directly from Amazon and not third-party sellers. The Japanese version is also available on Amazon Japan.

There are more expensive editions of the Japanese version of Shin Godzilla in Toho’s Godzilla store.

This fake Godzilla Resurgence DVD not only suffers from subpar video quality, it’s also an incomplete movie. We’re giving it the 99% terrible rating it deserves.