Undoubtedly, the first ever VOCALOID to shine on the Japanese stage. Hatsune Miku lights up the stage with her magnificent vocals. While she’s an android developed by Crypton Future Media, she’s well-received by fans all over the world.

As a stand-alone character, she puts up a dynamic appearance that would cater to different styles. Among these styles, the Mikuzukin module outfit was made popular by a 2015 rhythm game, Hatsune Miku Project Diva 2nd.

Max Factory totally made the design accurate for the Mikuzukin figure. Unfortunately, bootleggers caught up to this and illegally released their own unpleasant figure.

Let’s look at both of the figures, shall we? 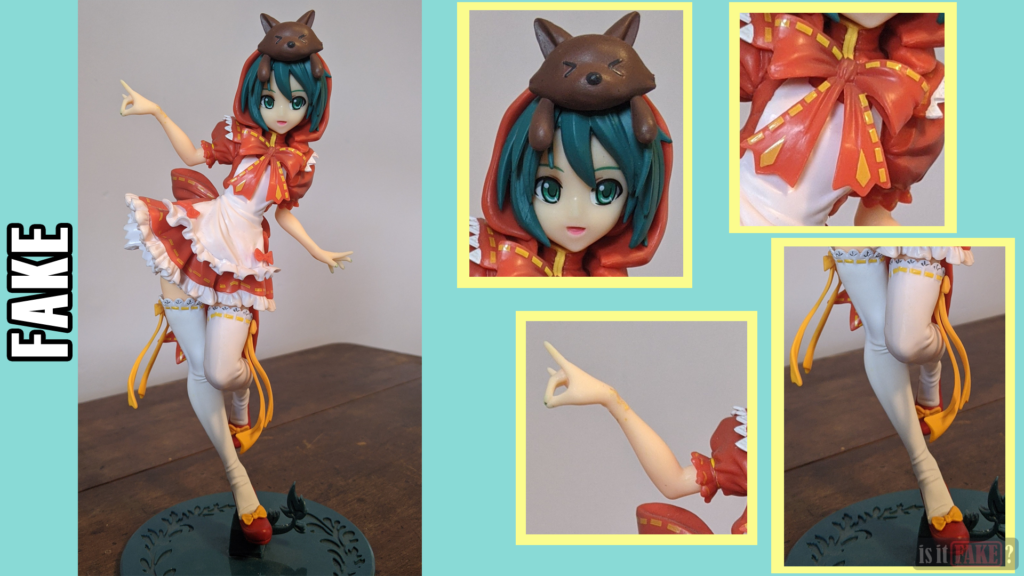 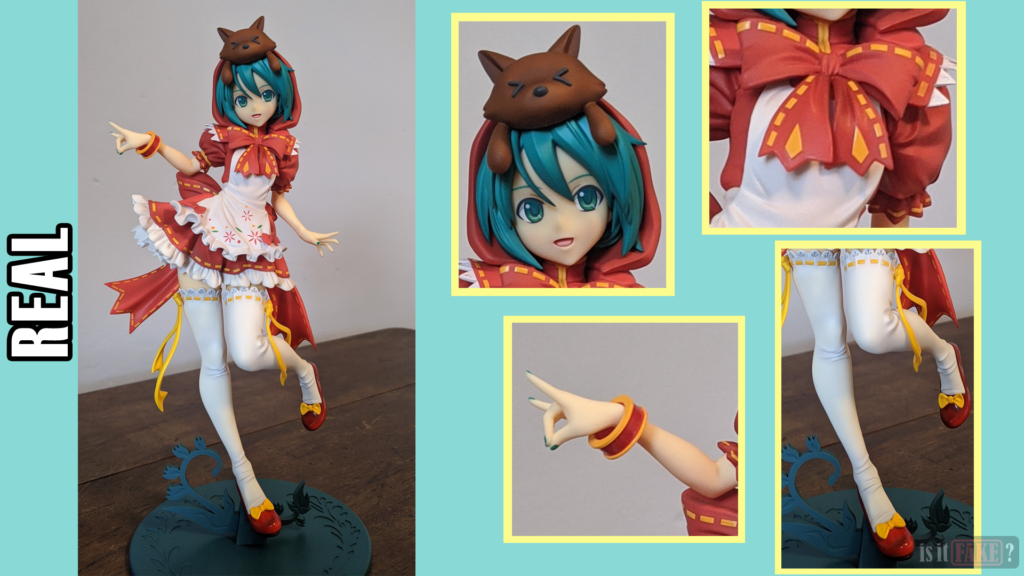 There are many obvious flaws you can point out on the fake Mikuzukin figure. By checking out the head area, you can tell that there are scratches specifically on the brown fox. The color of the bootleg isn’t as well-defined as the authentic figure.

From the overview, there are a lot of flaws already showing up. The fake can still be deceiving, but if you look at it side by side with the real one, you wouldn’t think twice.

The real Mikuzukin figure is truly an elegant sight. The figure is pretty smooth even from a fair distance. The details are accurate, crisp, and faithful to Hatsune Miku’s outfit.

Looking up close to both of the figure’s face, you can tell that the real Mikuzukin figure has the finest texture to offer.

The bootleg wasn’t even able to match up. The paint looks jaggy on the neck and on the ribbon. There’s even a crack on the hair.

The material used on the real Mikuzukin figure looks durable enough to withstand time. Of course, you’ll still have to be considerate with room temperature when it comes to taking care of its paint. The dress also looks pretty detailed with its proper sculpt.

On the other hand, the bootleg’s shape looks pretty odd. The cheap budget put on this bootleg really hit a toll on its quality. It feels very much like dead plastic. Apart from that, you’ll notice that it’s missing some details on the apron. 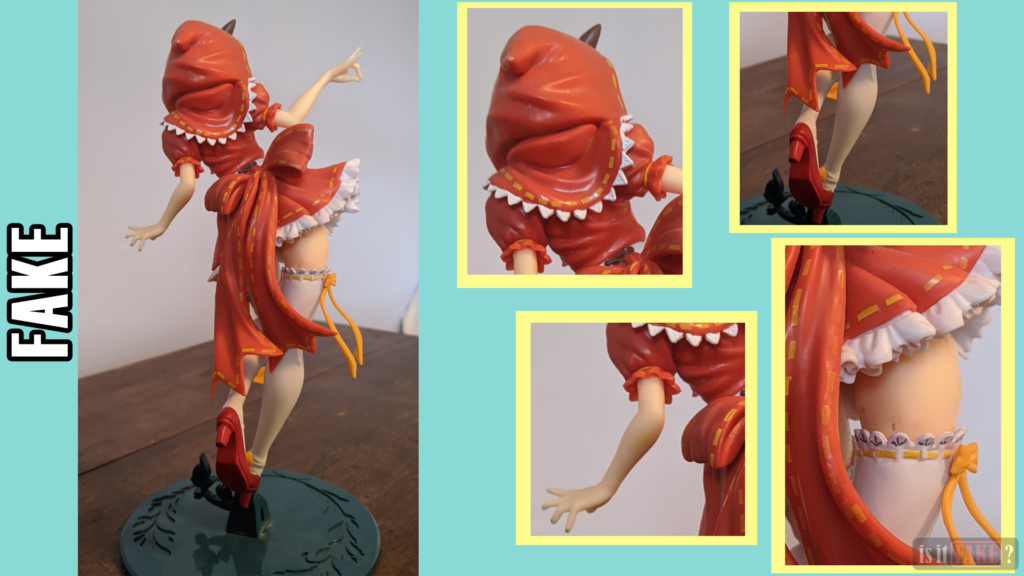 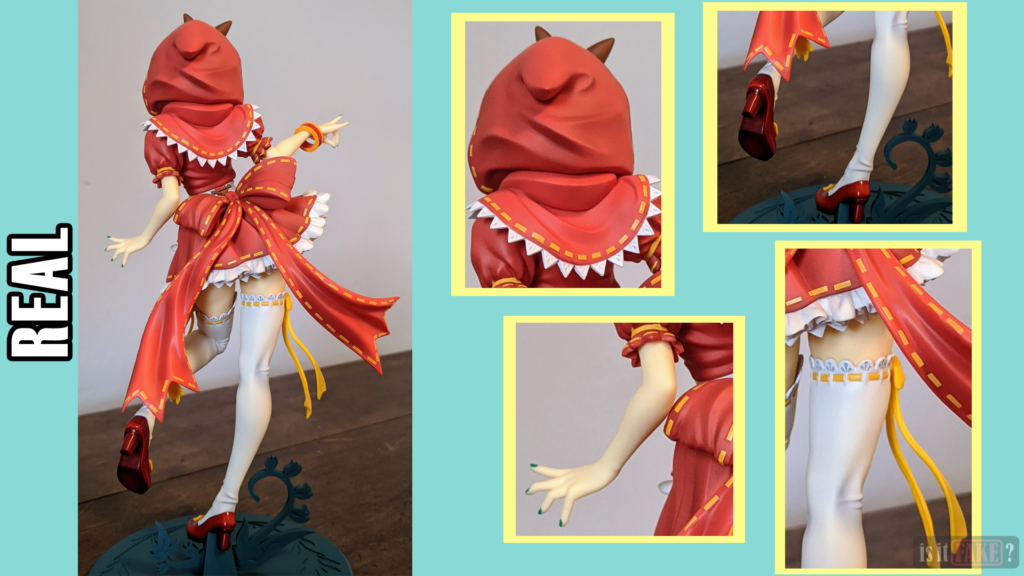 From the back, you’ll notice quite a handful of differences.

For a start, the real figure has a bangle on its right wrist while the bootleg has none. The nails also looks solid from the rear view. The paint job on the authentic figure just tops it all. You can feel the smooth texture of the dress from the back. The figure looks clean with a matte texture visible from its back.

Again, the bootleg looks like an awful mess from its back. Aside from the leg scratches, the left foot’s oddly misplaced as compared to the real one. The paint job looks faded from this view.

The real Mikuzukin figure’s footing is really top-notch. Even from the rear view, you can get a glimpse of its shoes glaring straight at you. And evidently, the material used on the authentic figure is a tier above average. No bootleg will ever match authentic quality, needless to say.

Nevertheless, the fake Mikuzukin can still fool unwary figure collectors. This is why we needed to look at both the fake and the real for further validation.

The Hatsune Miku – Mikuzukin – 1/7 Scale figure is absolutely a top line item. Of course, this is what you get when you pay for an authentic figure. A flawless and an elegant design. Max Factory did they job well in sculpting the figure and deserves a perfect score for it.