Anime idols are best when portrayed as PVC figures which is why Super Sonico immediately became a good candidate.

Emerged to popularity from 2011, Super Sonico appeared in different media — Games, Manga, and even Anime! Who is she anyway? Well for starters, she’s a character created for Nitro Plus, a video game software company. You could say that Sonico also appeared is visual novels as the company usually develops computer games based on these novels.

Normally, Sonico’s character design comes with a signature headphones. A college girl with pink-dyed hair and big eyes. She’s definitely a hottie! That’s why she’s taking it bold posing for the Noodle Stopper collection by FuRyu.

In its name, Noodle Stopper figures have an obvious purpose to cover your cup of noodles — in style — while it’s still being cooked in boiling water. Unfortunately, there has been an influx of bootlegs and we’re here to check out if this Super Sonico figure is one of them.

IS IT A FAKE FIGURE?

Most bootlegs don’t bother having a box. Fortunately, the Noodle Stopper Super Sonico that we got has a box of its own. So at this point, there isn’t any hint that this figure is one of the bad stuff yet. 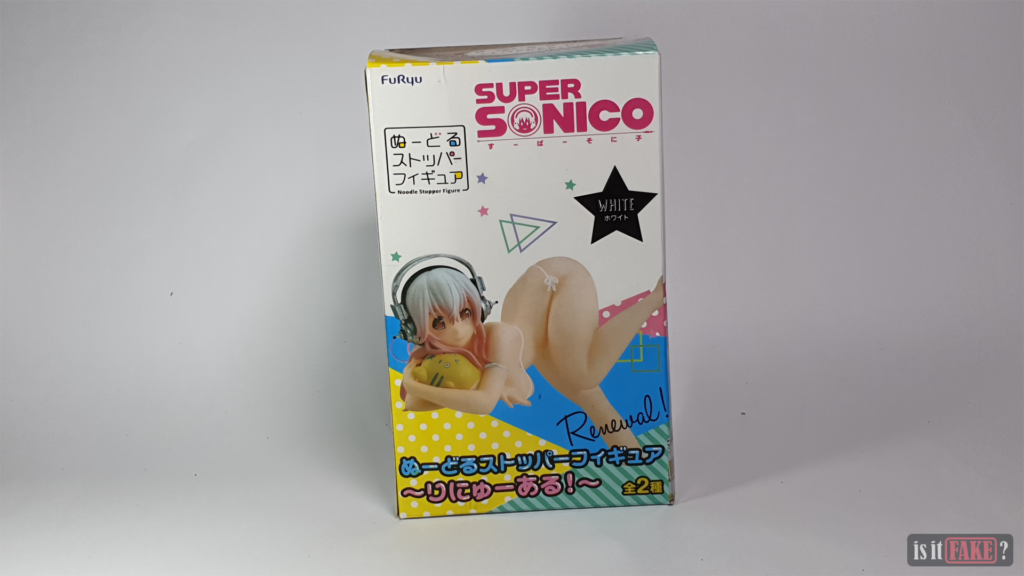 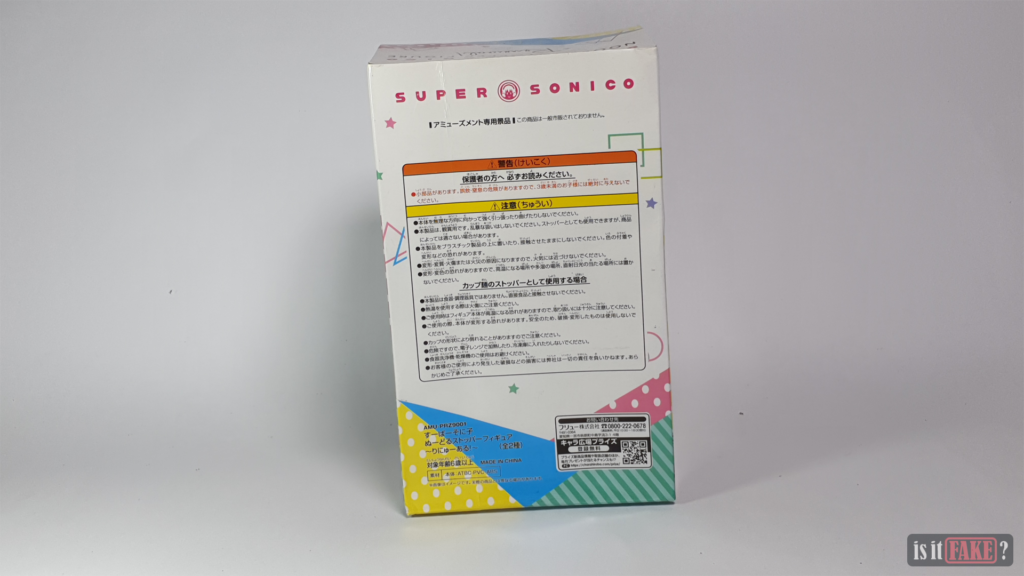 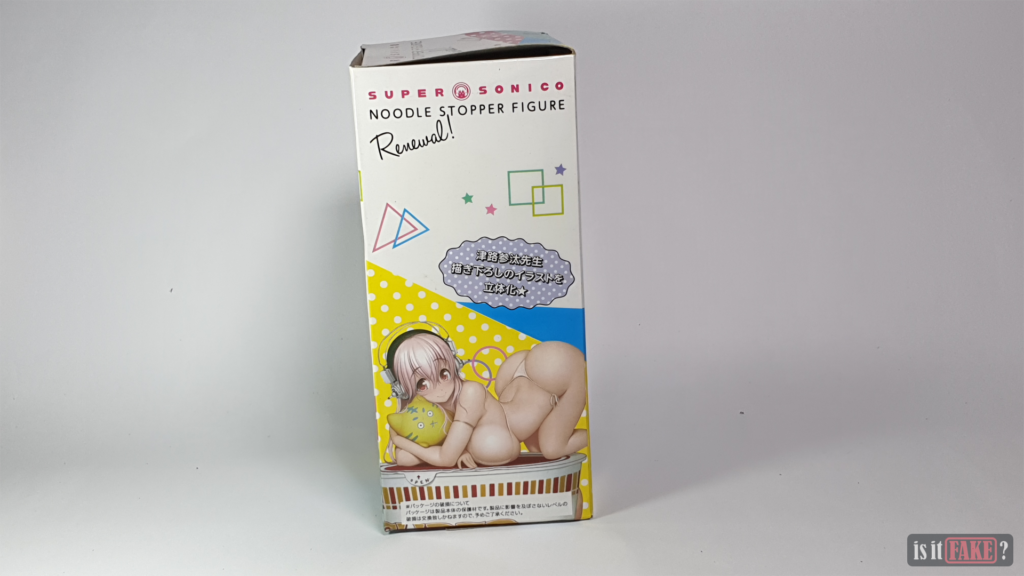 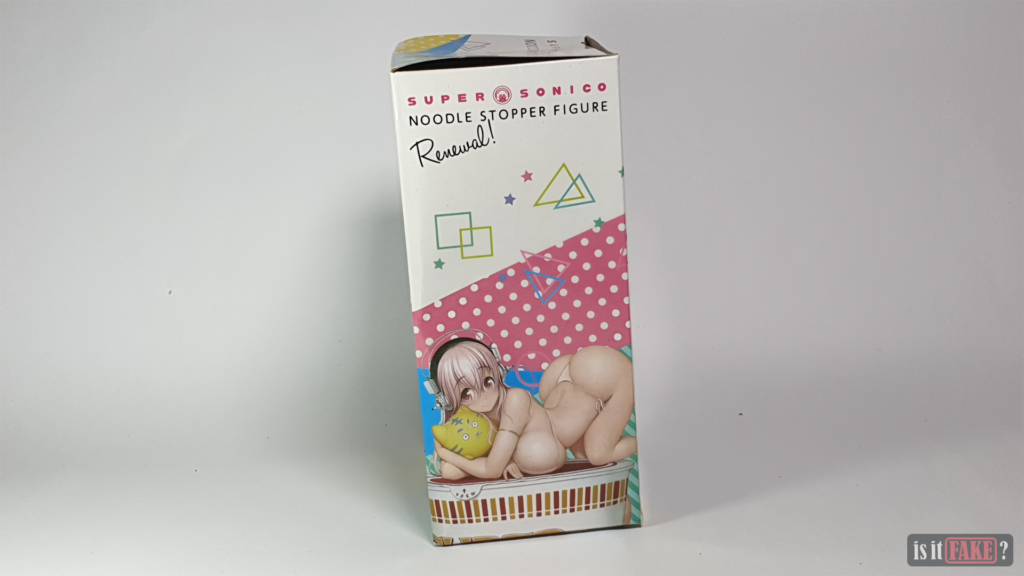 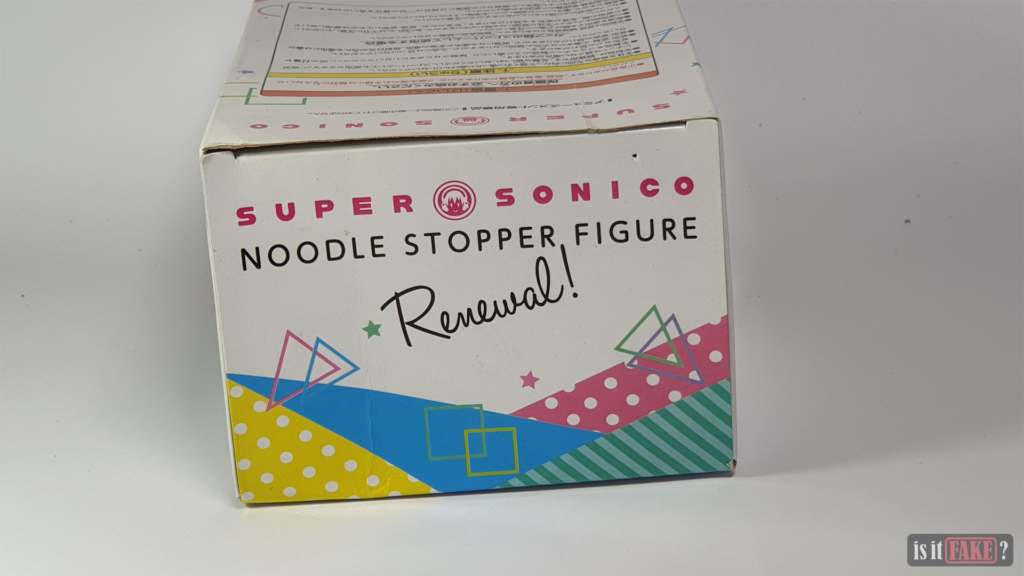 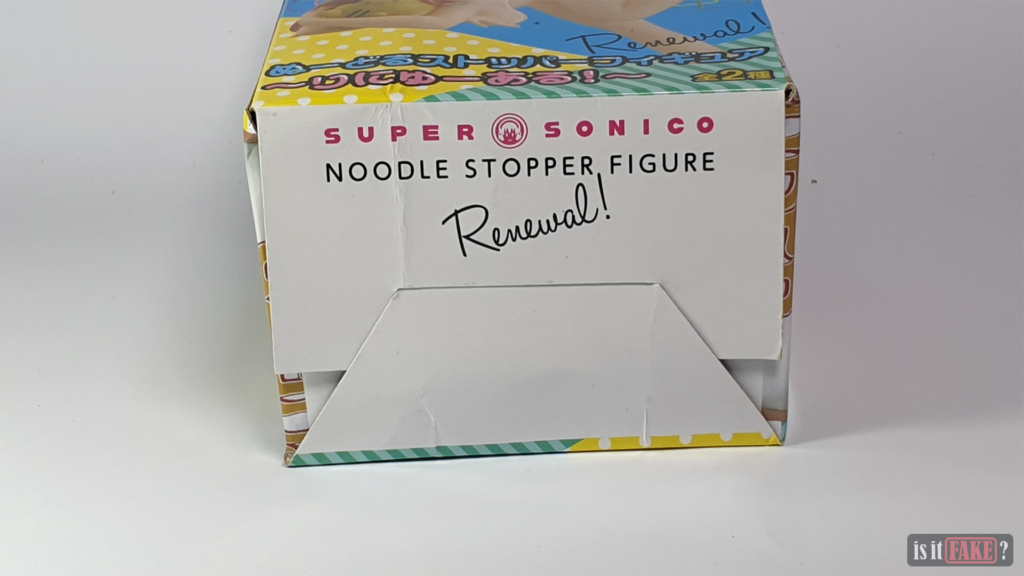 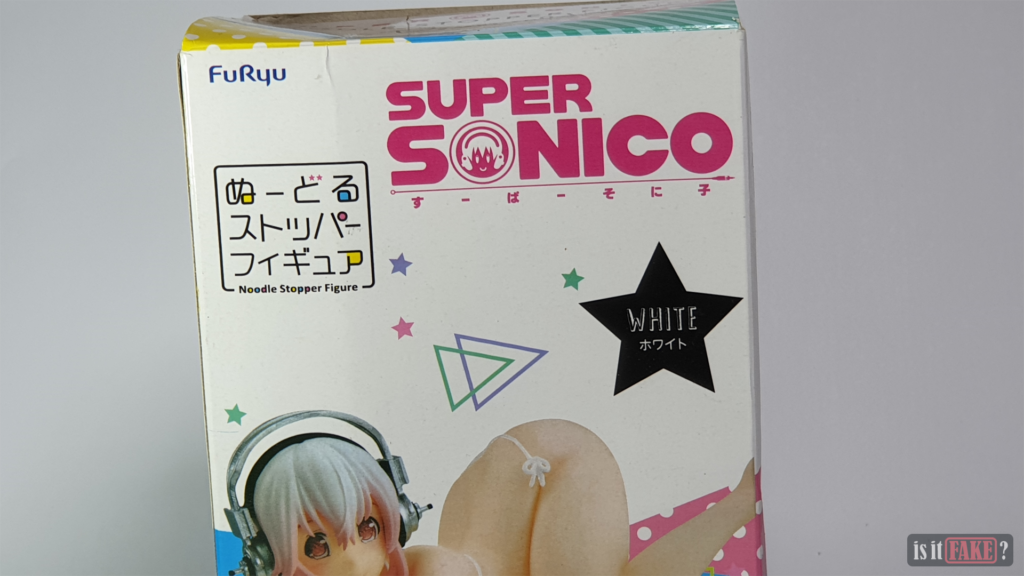 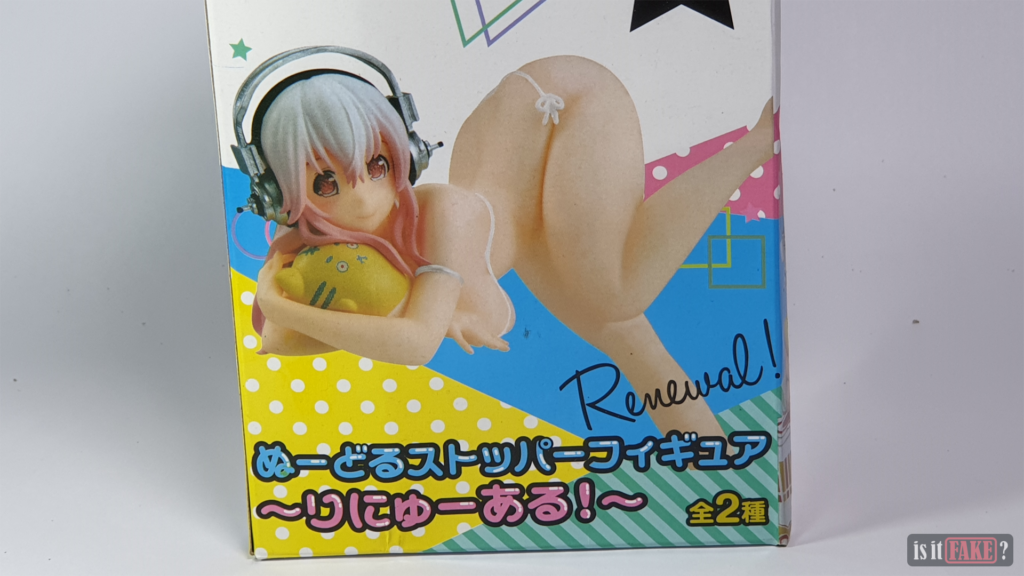 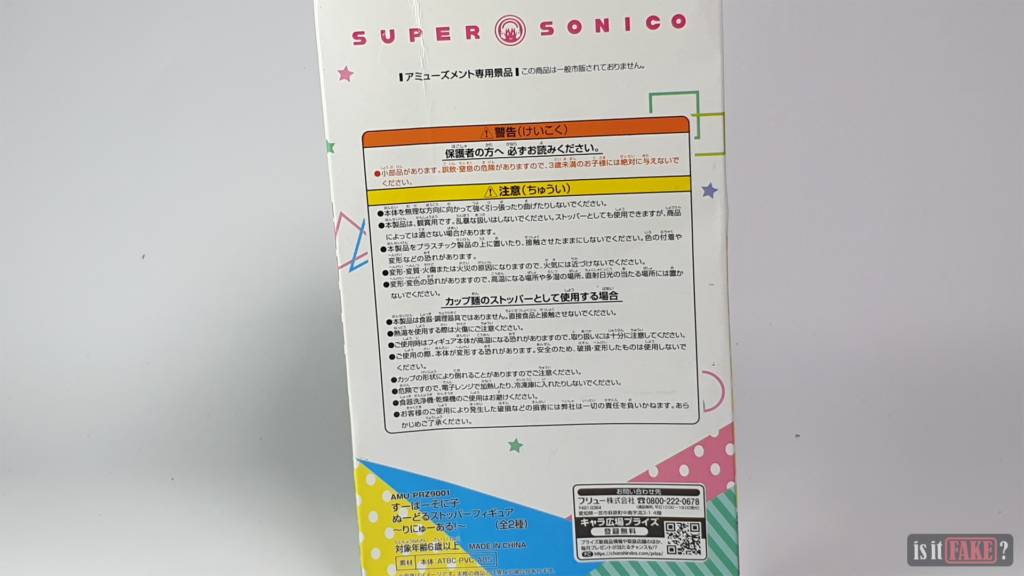 Judging from the packaging, the figure should look fine. It tells you that you shouldn’t really worry about getting a fake figure. But no — that’s when you should keep your guard up. The packaging doesn’t really have a seal, or any sticker of authenticity from the manufacturer. You could completely tell that this one’s a loose package.

You won’t really find enough evidence on the packaging alone — that is, if you want to know if the figure is a bootleg. Most authentic could already tell you that it’s a legitimate product from the packaging alone. However, there isn’t any sign of that in the box you’re looking at. So, shall we start looking at the figure? 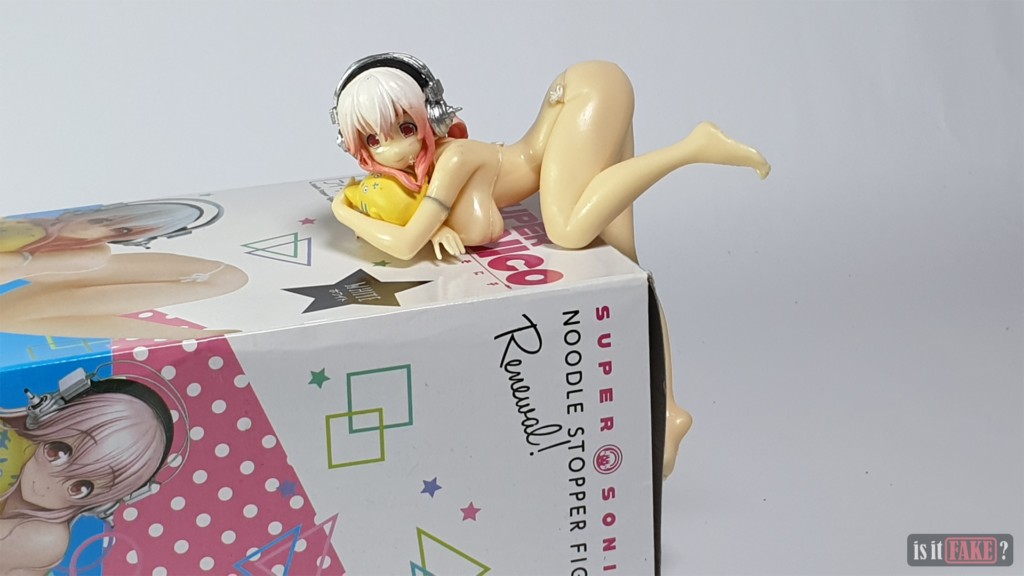 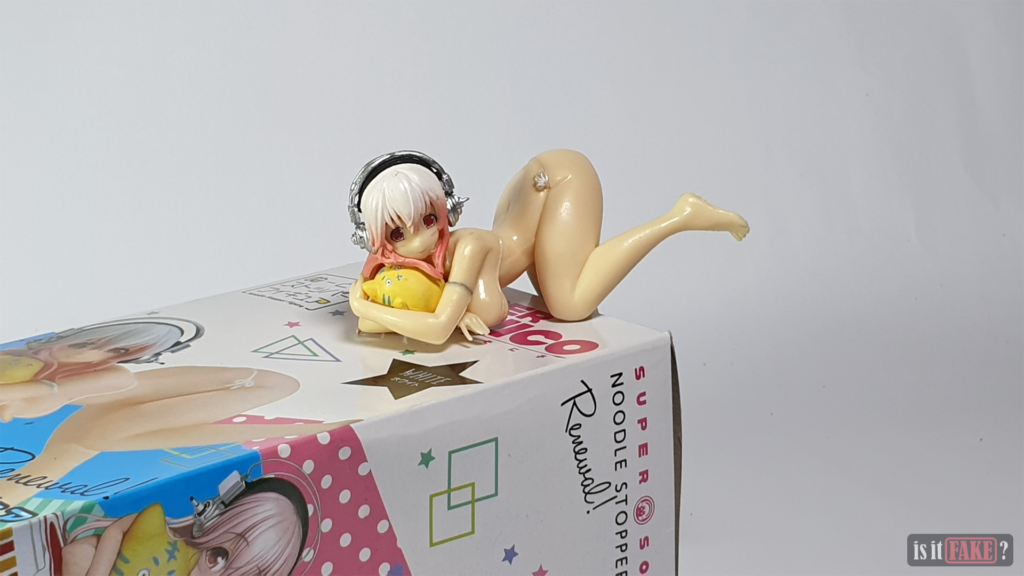 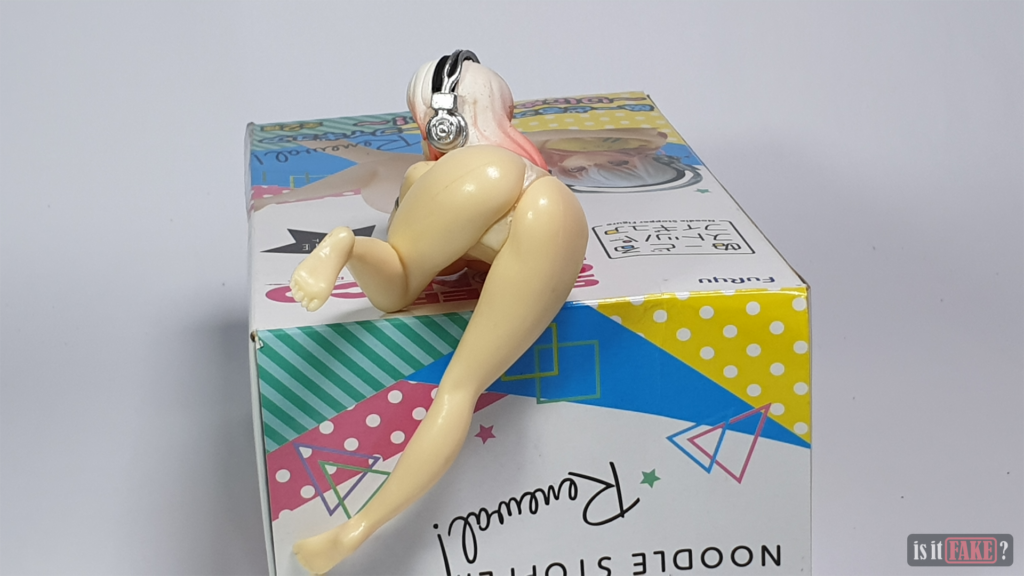 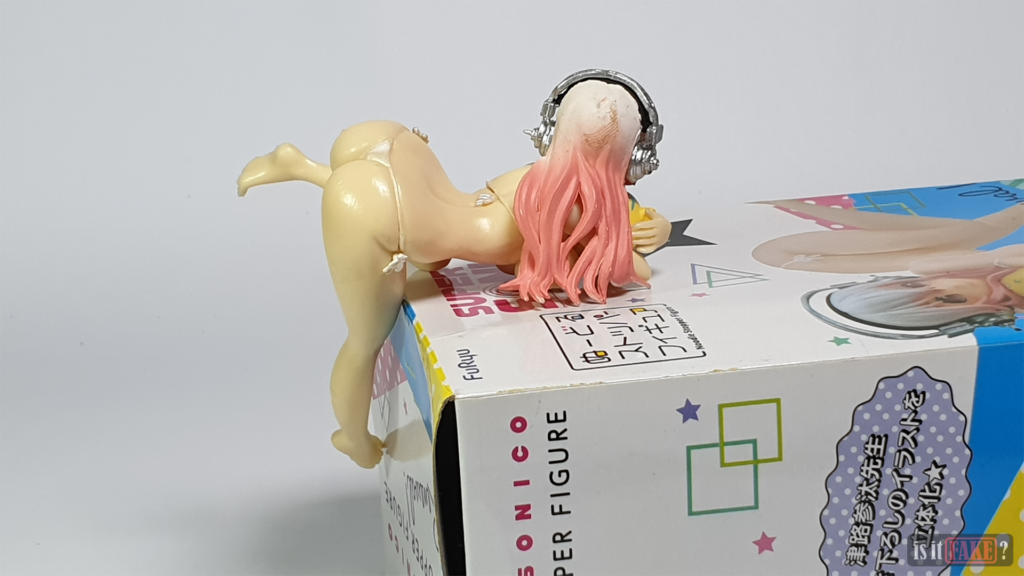 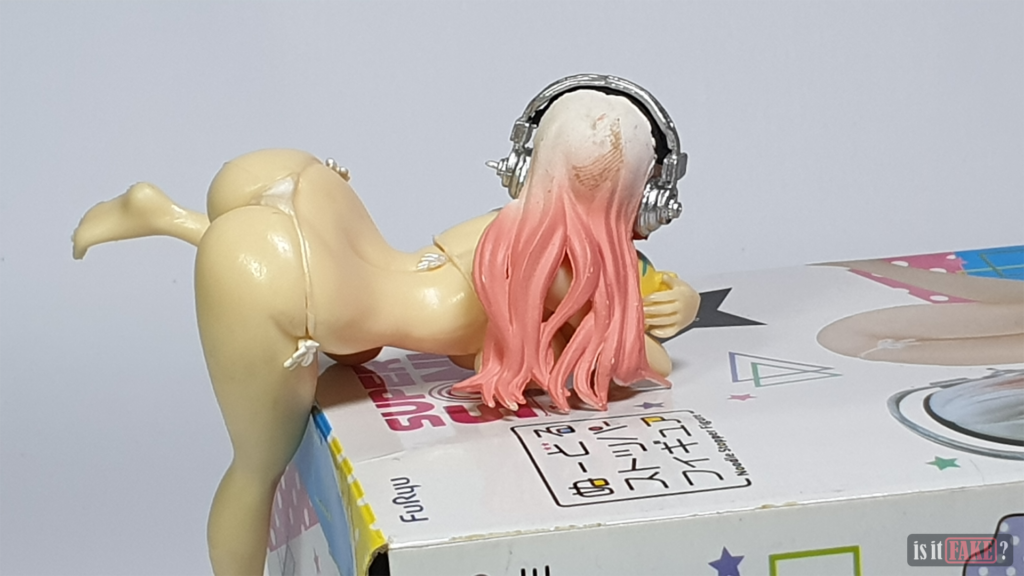 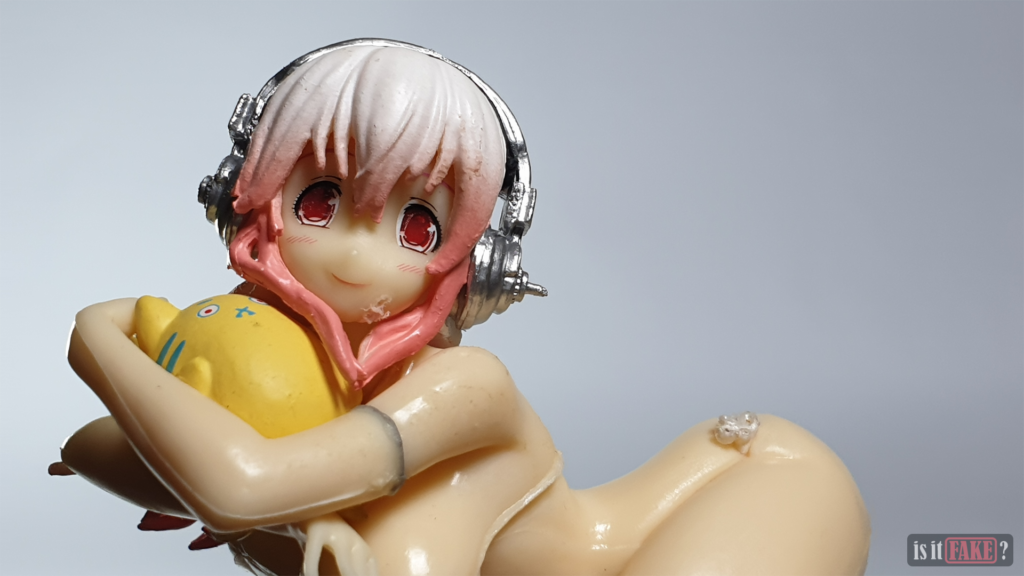 An overview of the figure could actually tell you a lot about its true nature. Looking closely at Super Sonico, you’ll notice a handful of flaws and inconsistencies. From a distance, this Noodle Stopper may do its job covering up your cup of noodles but it will always be an eyesore.

Okay — the figure has an alluring design. It’s made to make you stare. The longer you stare at this figure, though, the sooner you want to look away.

Let’s talk for real. This bootleg — and yes, it’s already marked as fake — has low appreciation for quality. The material is cheap, and the details are far from accurate. The sloppy paint job is totally horrible. You’ll even see a weird stain on the back of its head. For sure, you’re afraid to know what that is! 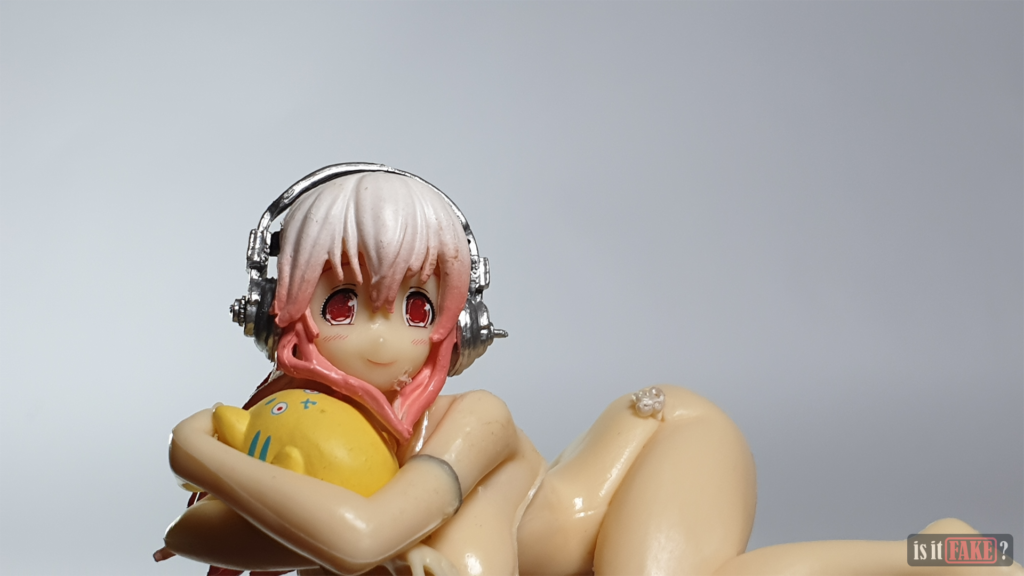 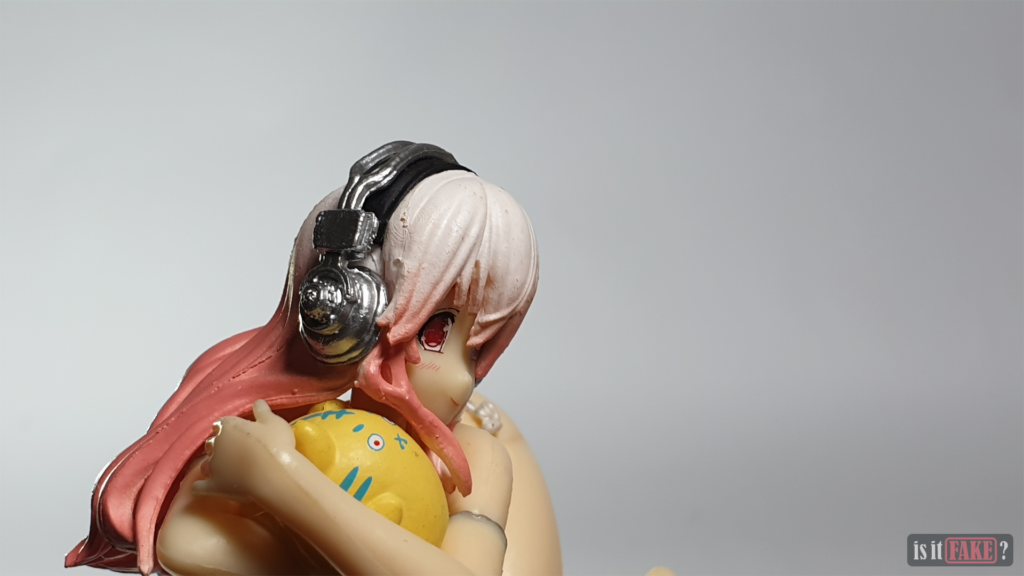 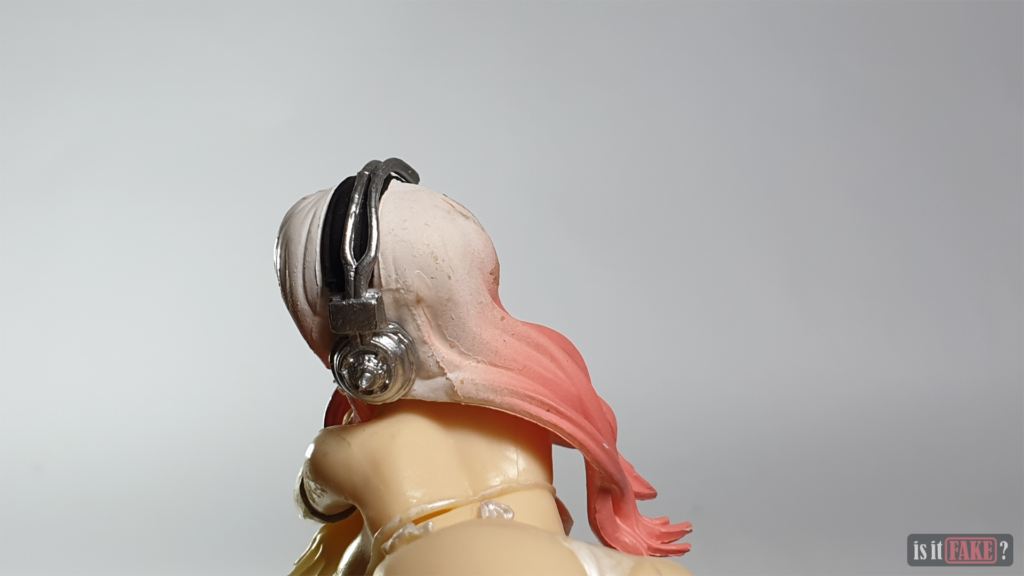 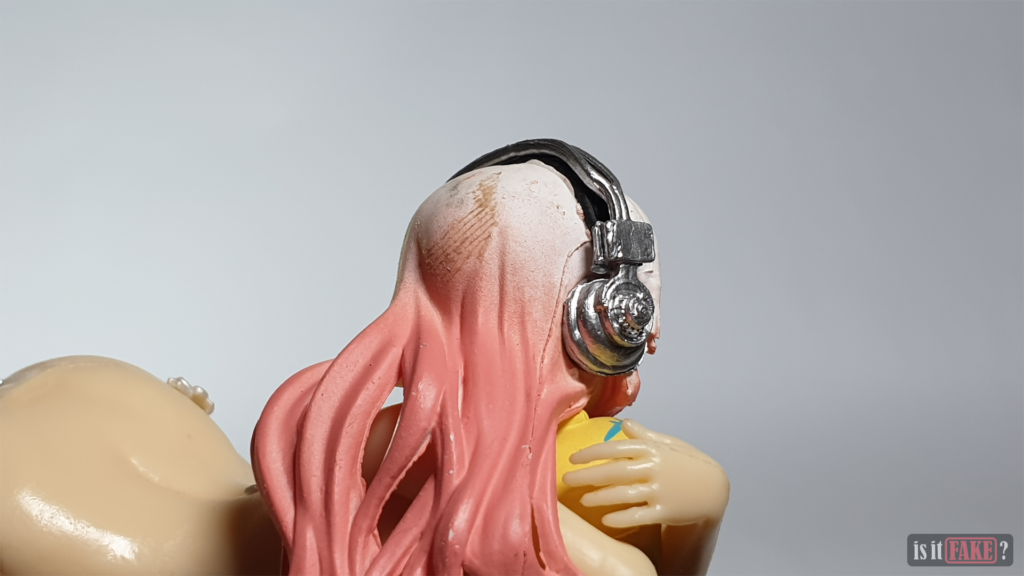 At a closer view, the bootleg has countless of scratches. On its face, hair, and have you even noticed that awfully painted headphones? It’s nowhere near metallic — assuming that’s how it was supposed to look like.

Shape and texture don’t cut it at all. There’s an awful lot of damages noticeable on the figure’s hair. So if you’re still doubting whether this thing is a fake or not, you’ll eventually realize it from that part. The eyes are totally chipped off although they’re not really noticeable at first. 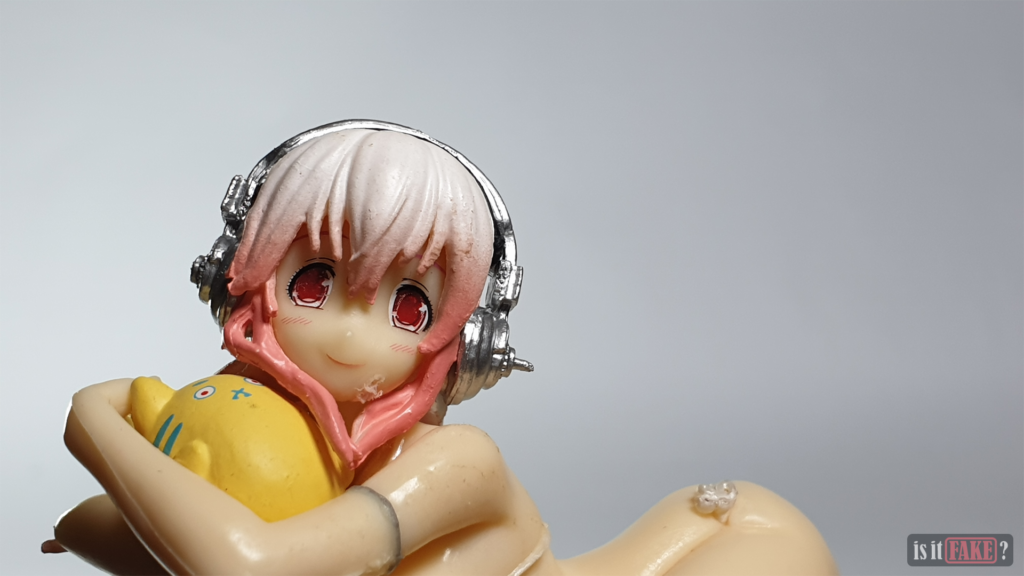 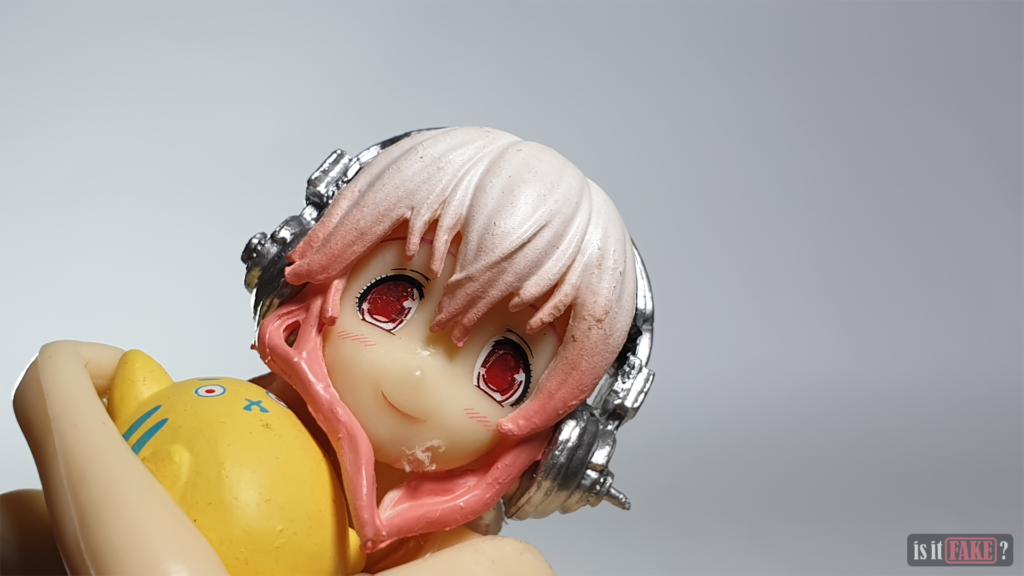 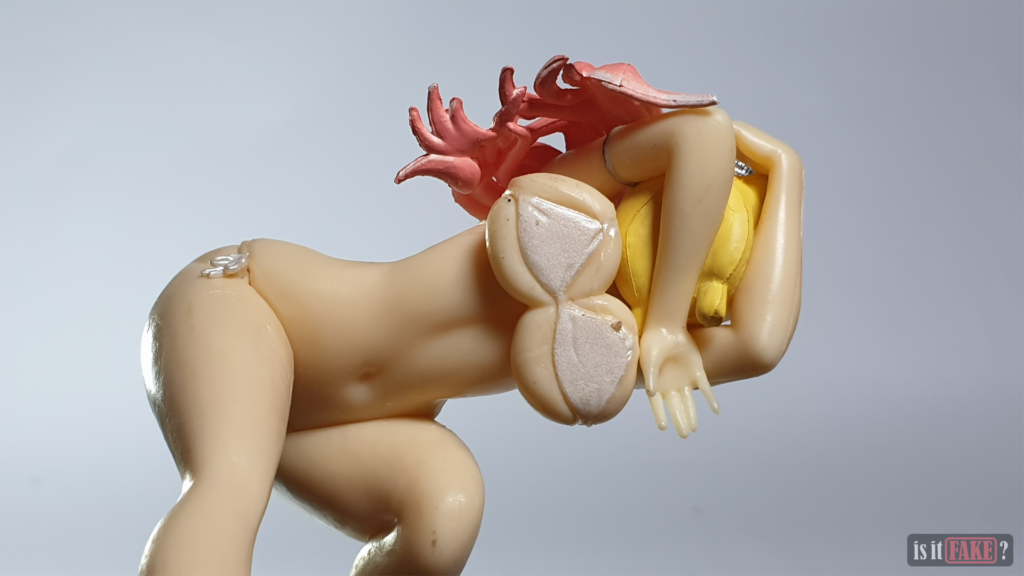 The bottom area of the bootleg is where you won’t first see the figure for obvious reasons. You’ll be surprised by the bra’s shoddy detail. Of course bootleggers won’t mind since you won’t even see that from their manipulated photos.

FuRyu is a renowned brand for creating bold figures like this design. They have a track record of perfecting details even that from their most affordable collection. They won’t release a defective figure in purpose and they had probably thrown this one in the trash. Being the clever ones to make easy money, bootleggers usually see this as an opportunity to take these rejects from the trash bin to sell illegally.

The truth is this design is history. Many collectors have scrutinized the original design, and they’d do that more when they see this bootleg. What you need to realize is that fake figures are far worse when the original didn’t cut a collector’s taste. For collection purposes, the fake figure is the worst choice, needless to say.

From scratches to rough surfaces, you’ll probably be able to write a ten-verse diss track about this bootleg. For these reasons, it deserves to be blasted with a 90% TERRIBLE RATING.