Special thanks to samkaizoku from MyFigureCollection.net for making this article possible

Being able to transform into a Dragon, Kaido deserves being in one of the four Emperors of the New World. His dragon form can be as large as a small town — at least as it was seen during Wano Country Arc in One Piece.

To give you a slight perspective, Luffy’s attacks didn’t seem to have any effects on Kaido. Yes, he immediately came crashing down when he was in dragon form, but nevertheless, Luffy only took one hit before he was knocked unconscious and bleeding on the back of his head.

Kaido’s definitely a force to be reckoned with. Renowned as the STRONGEST CREATURE, he holds an exclusive spot in the Portrait of Pirates figure line of MegaHouse. Taking a place in the MAXIMUM brand of the manufacturer’s brand, the “WA-MAXIMUM” Kaido (The Beast) figure will make you hold your breath on first sight. He’s definitely read to smash heads and wreak havoc across many seas.

The P.O.P “WA-MAXIMUM” Kaido figure obviously comes with a box. It’s definitely out of the ordinary though the figure’s pretty enclosed in it. Some figures in the Portrait of Pirates series like the Vinsmoke Reiju actually has a window opening where you can see the figure upfront.

There’s a huge gap between the quality grade of both figures, however. Kaido is an exclusive figure. The purpose of an enclosed packaging is give it a mysterious vibe. Hence, we’re looking at premium box as well. 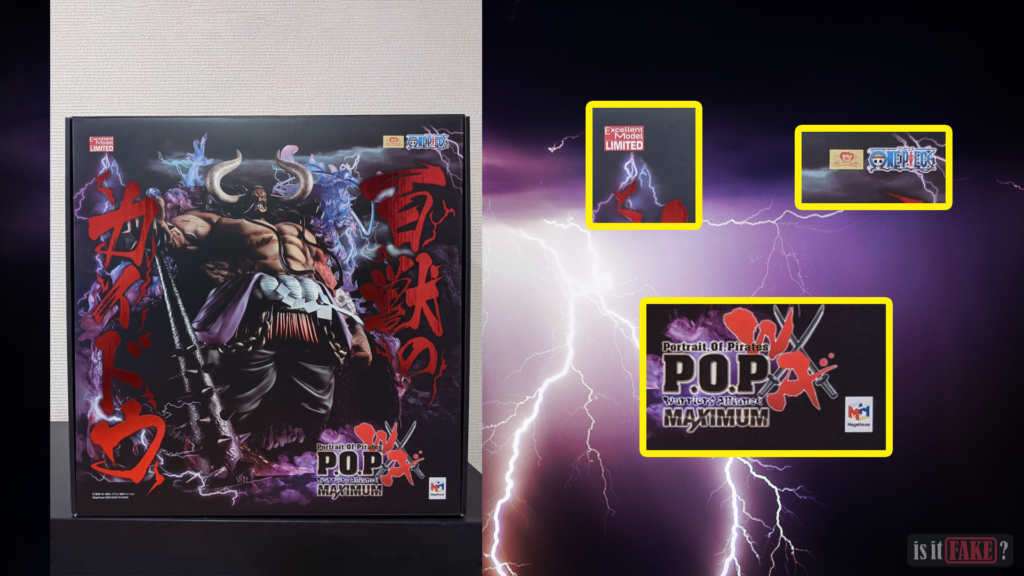 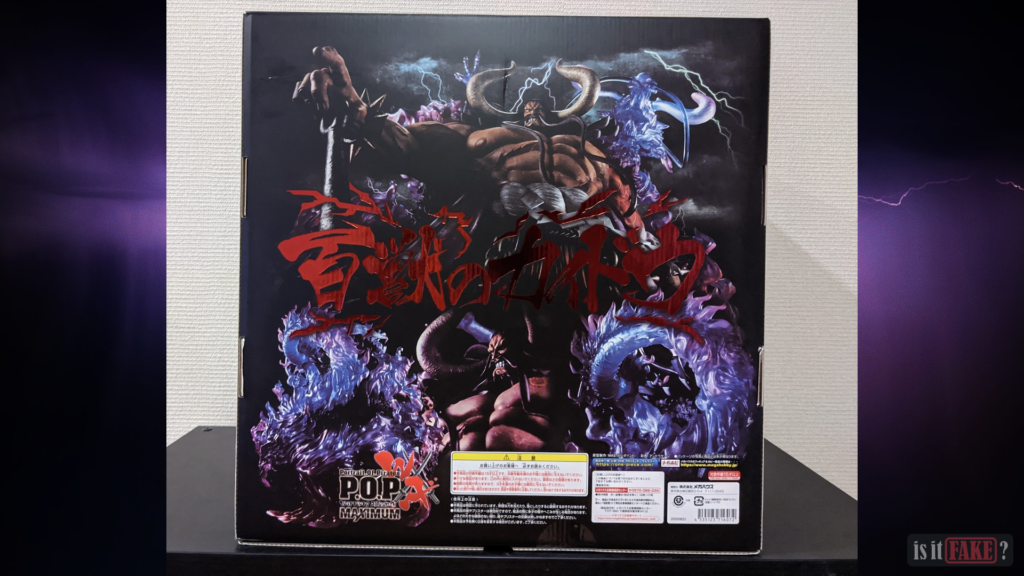 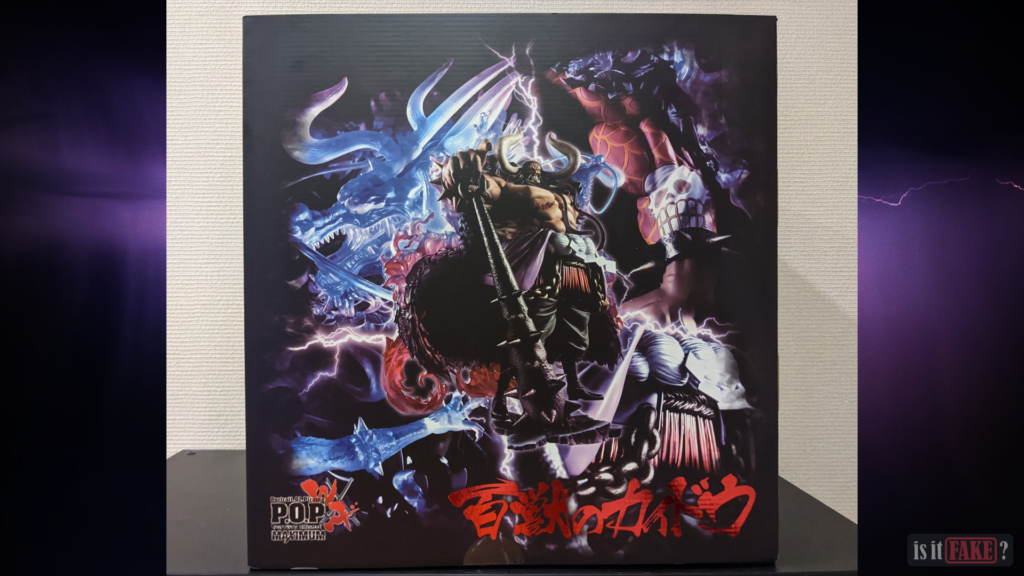 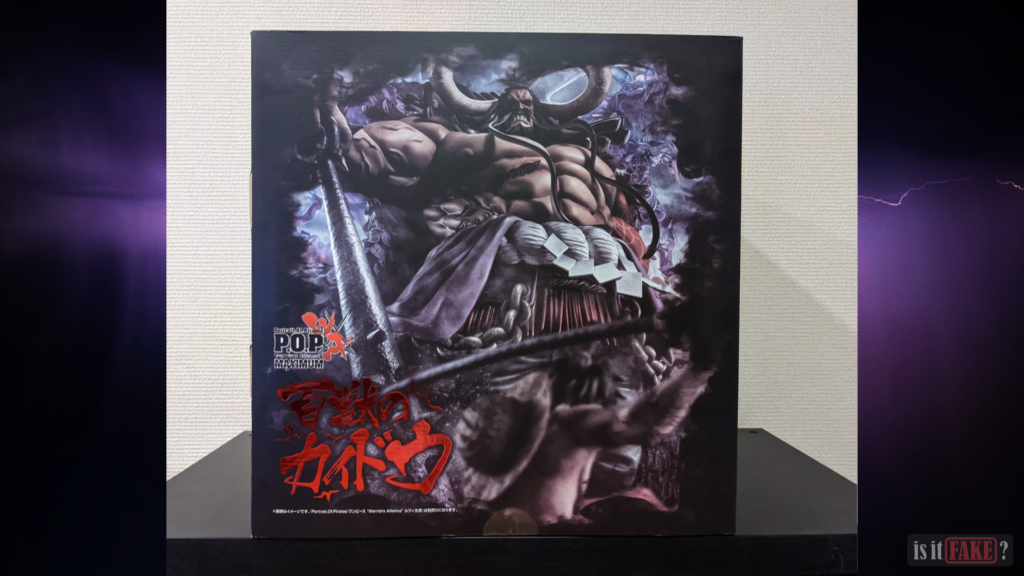 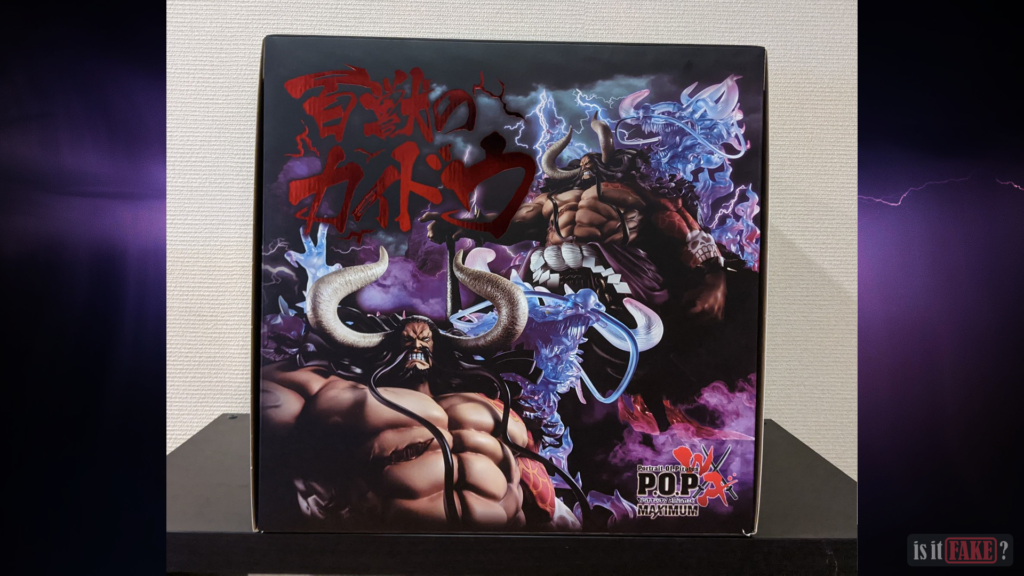 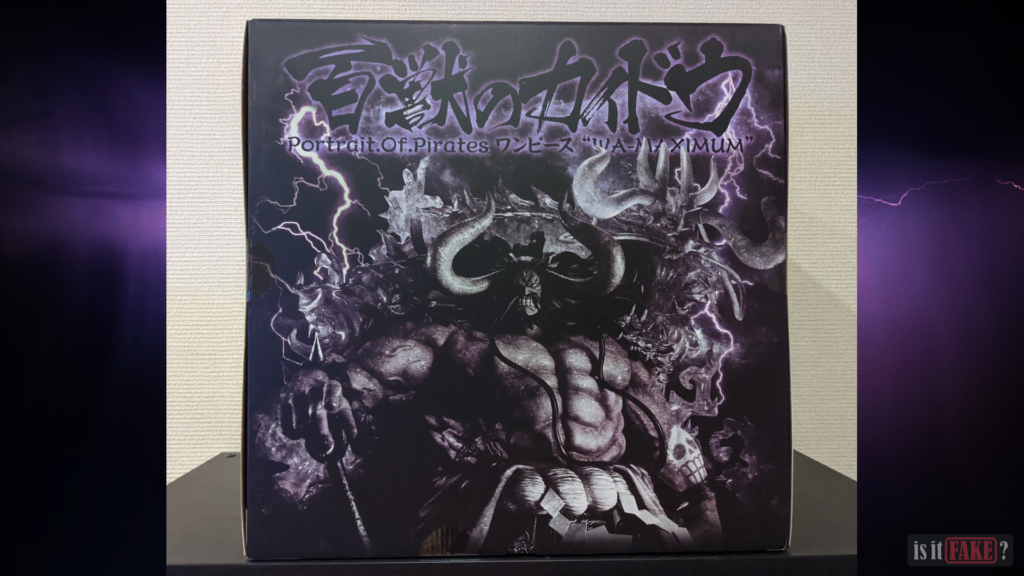 There’s no doubt, it’s gonna be exciting opening this up. We see Kaido’s box all complete with the authenticating logos and stickers: MegaHouse, Toei Animation, One Piece, Excellent Model brand line, and lastly, the P.O.P figure line logo.

The art on the box is definitely breathtaking. The quality of the packaging is in its perfect condition. The Japanese characters on the box are holographic. It just tells you how much the figure should be valued.

Without further ado, let’s get into the figure itself! 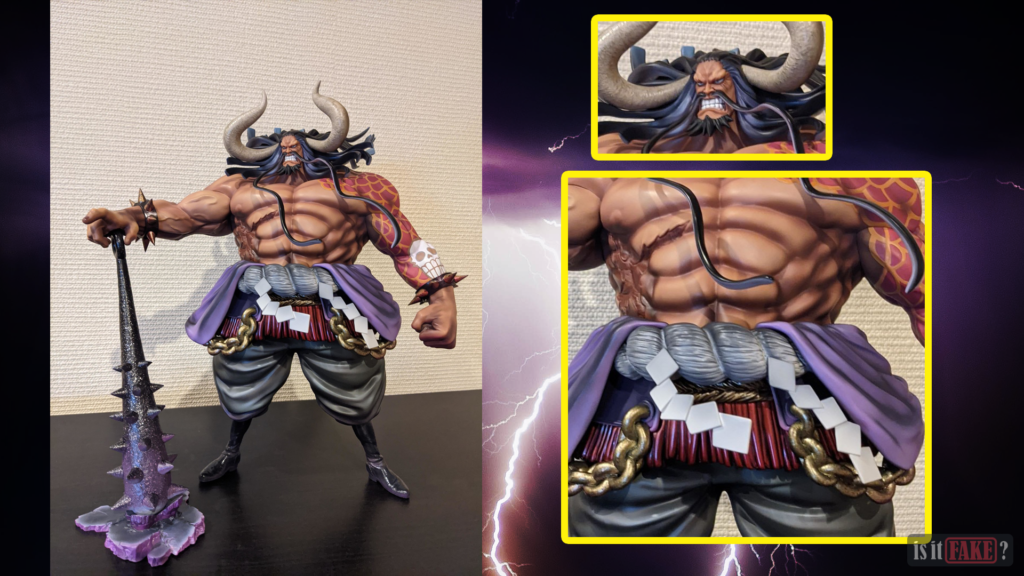 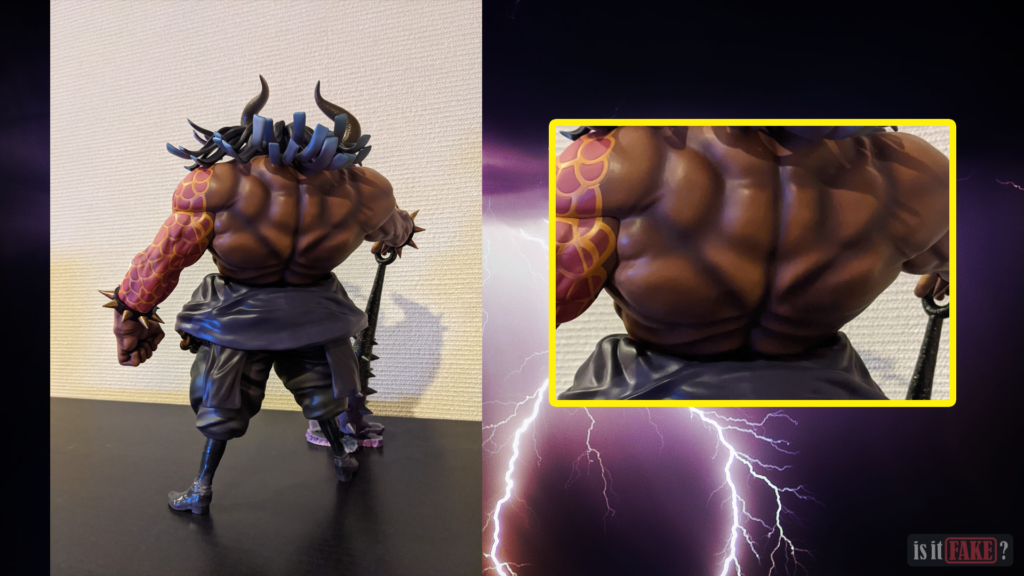 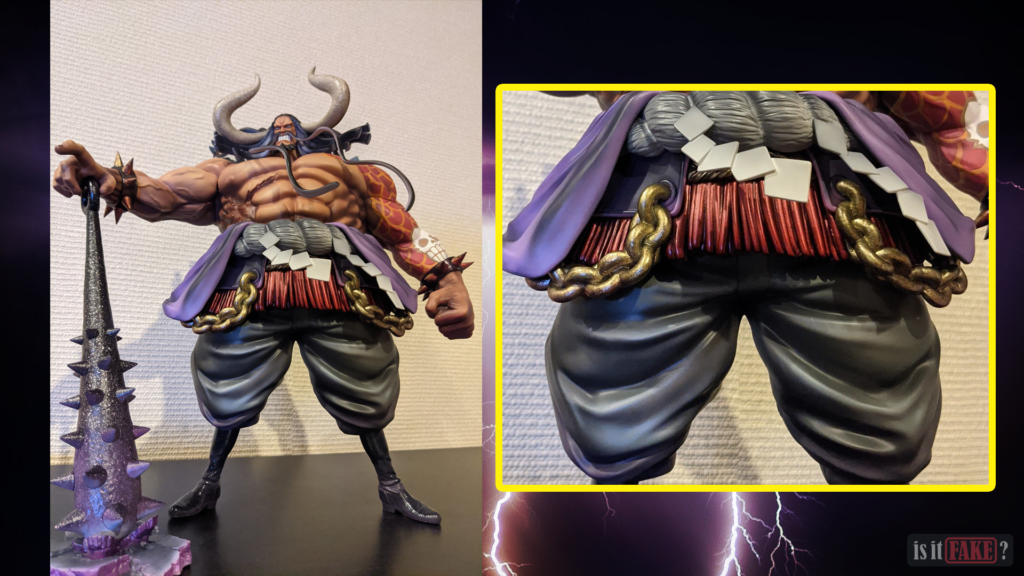 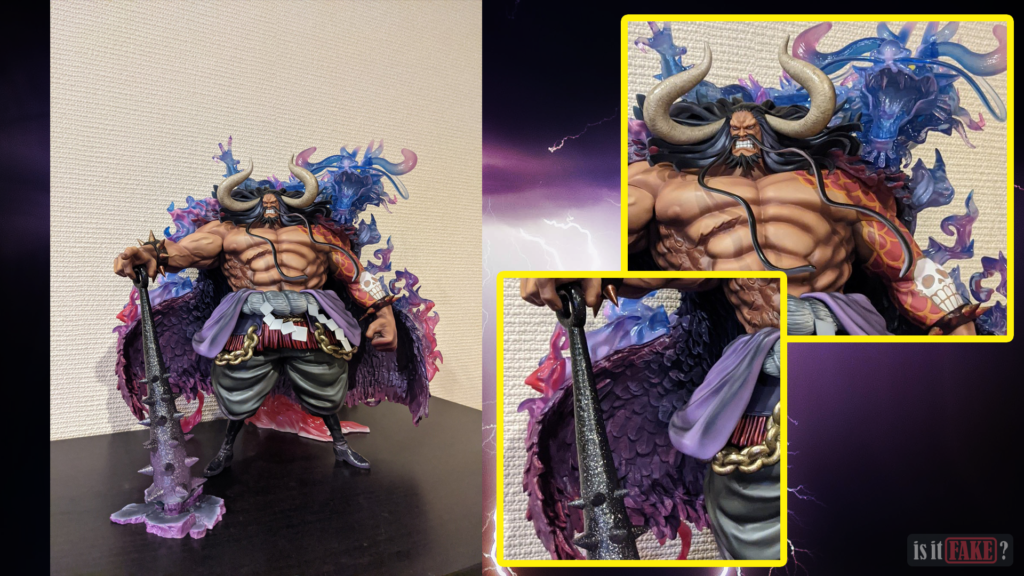 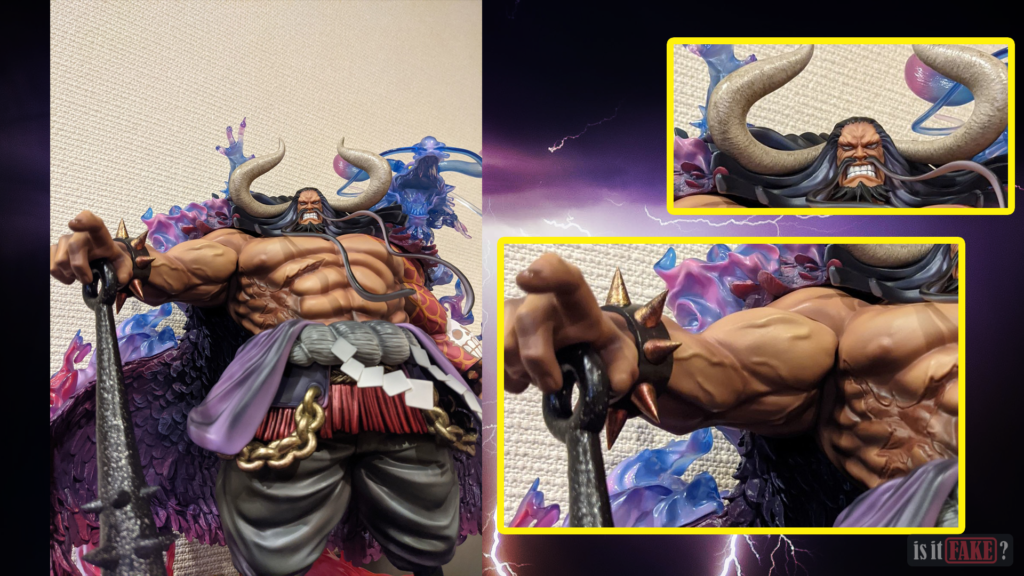 The whole figure is divided into four parts, mainly: the figure, the club, dragon cape, and the dragon head. The dragon cape and the club simply act as its base, to hold it on its position.

At a glance, it’s truly a majestic sight, and to give you an idea of its height, it’s as high as a ruler — and add 2 inches on that. It’s higher than 1/7 scale figures and maybe twice as wide because of the Kaido’s physique. It’s definitely Kaido being reimagined if he could have his dragon form as an aura. 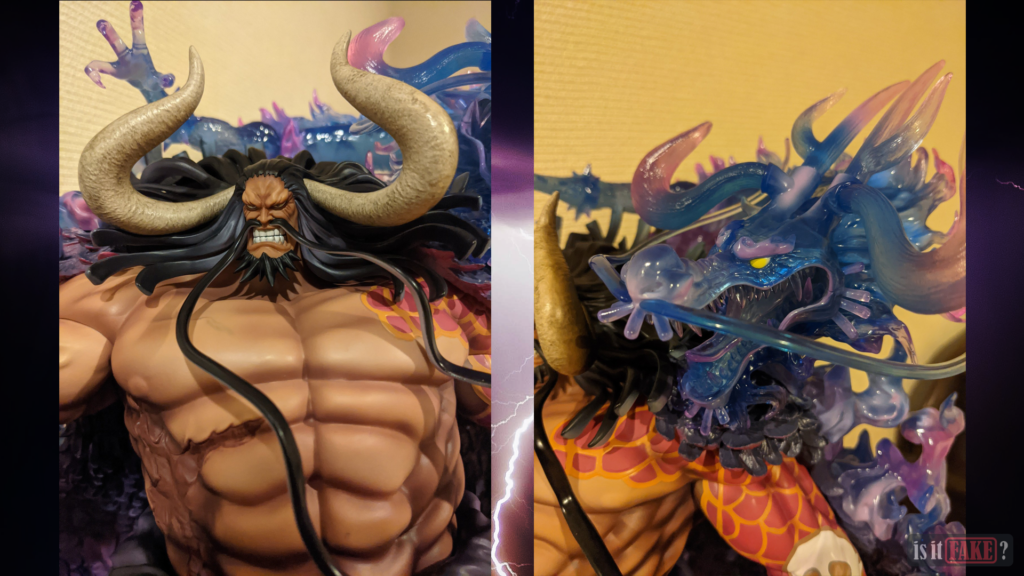 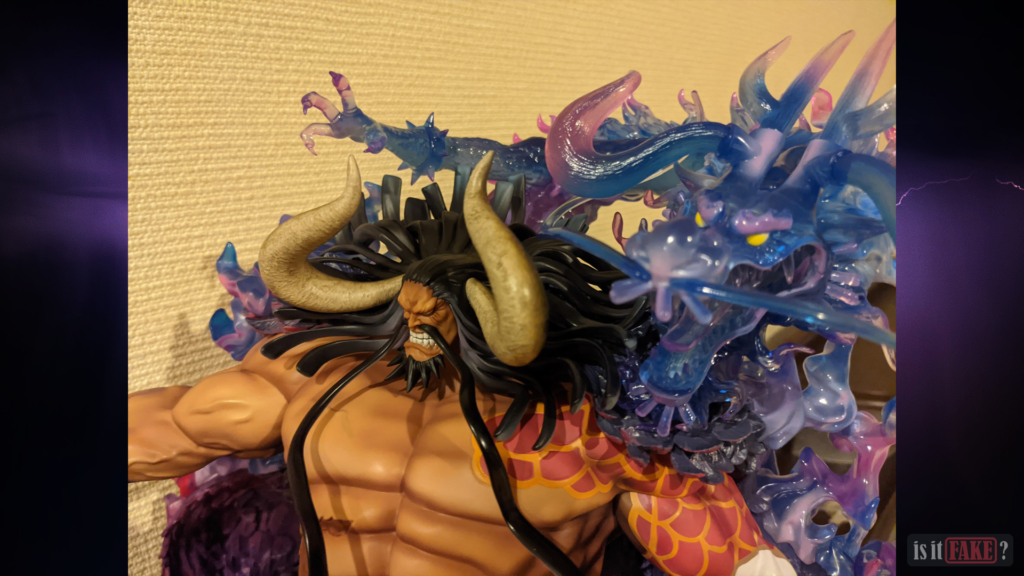 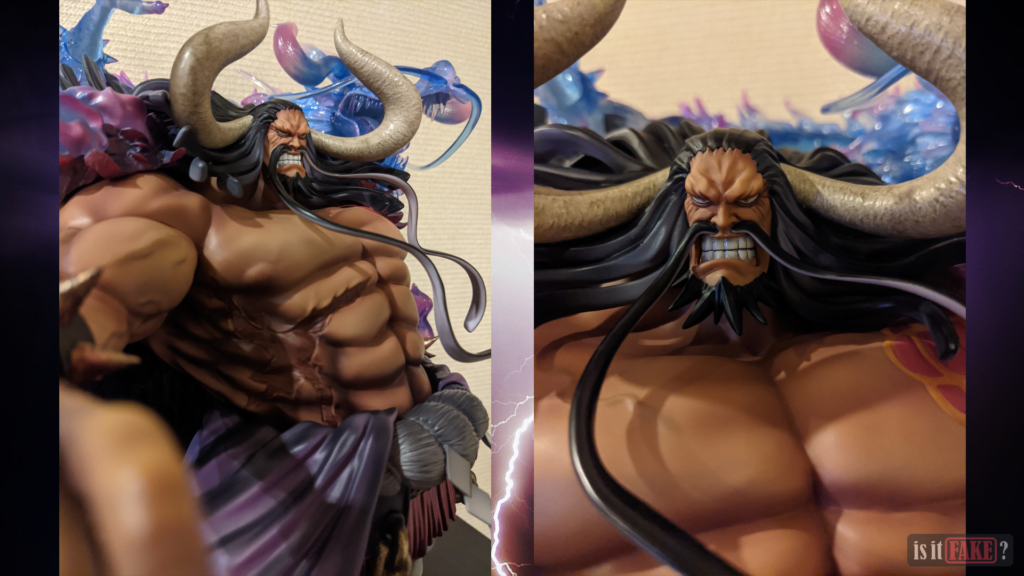 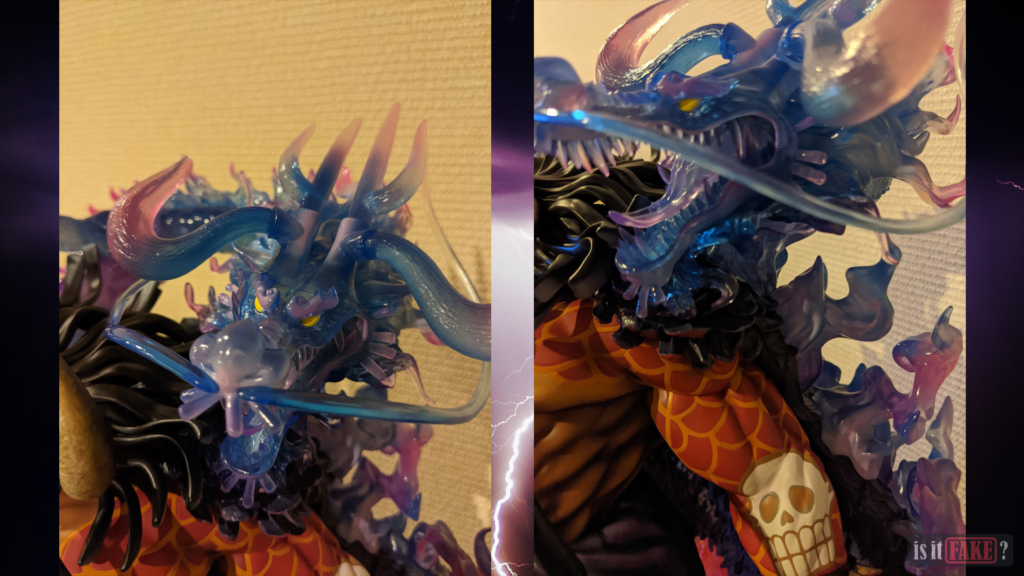 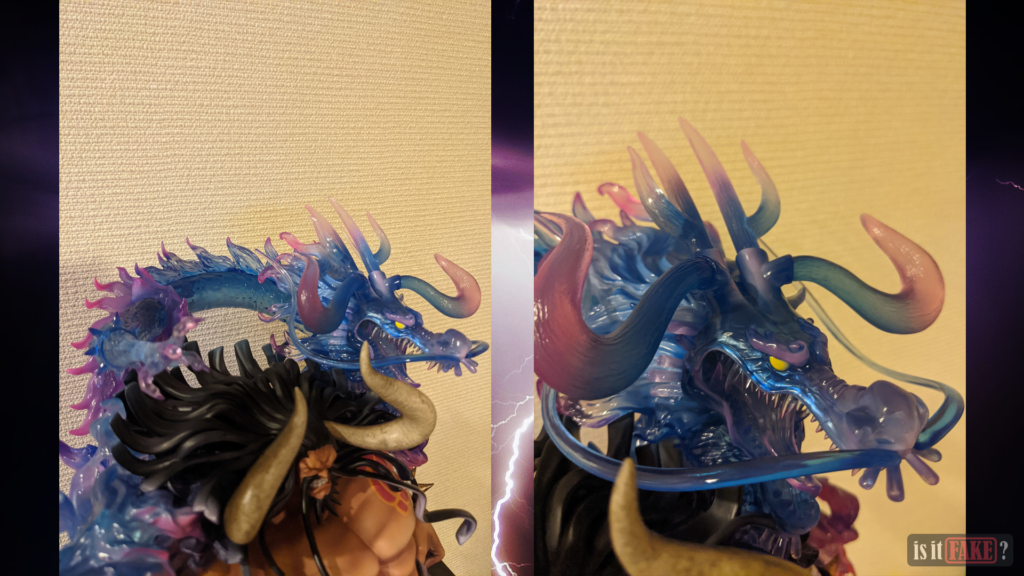 Closing the distance, the Kaido figure has some nasty features. By nasty, we mean high grade details. Look at the that teeth, the wrinkles on that face, and the seamless facial hair, not to mention the horns from a specific angle. Everything looks so smooth, and by that, his expression is totally badass.

The dragon on his back is built on translucent material. Normally, we wouldn’t see Kaido in this pose and aural appearance. Hands down to the artist and sculptor behind the design. 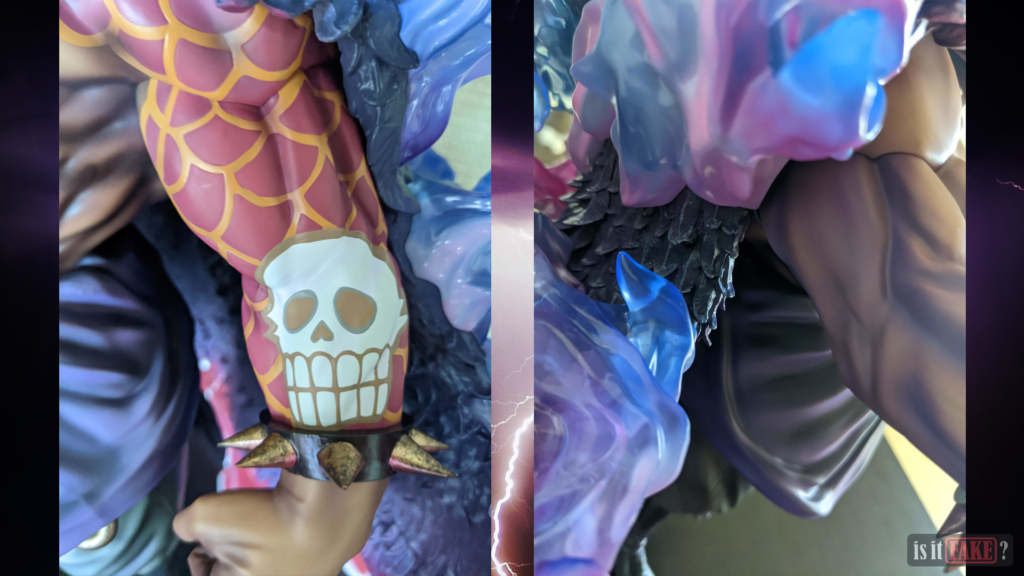 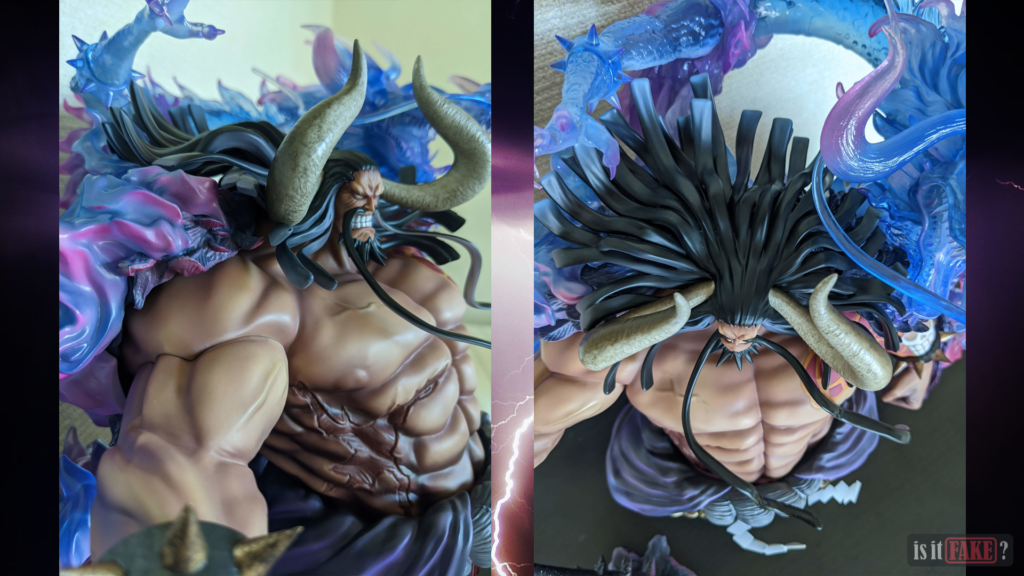 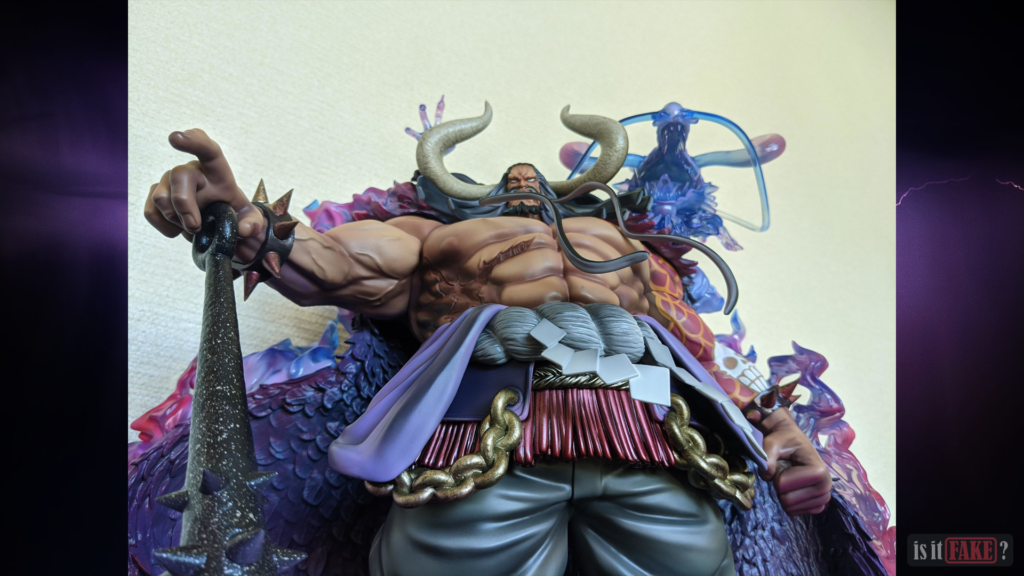 Whether it be the smallest details or even the most noticeable ones, the figure stays faithful to the character design. Of course, it’s an enhanced design, but the tattoo and the crisp details of Kaido is visible for sure.

The veins are spectacular, needless to say. It says a lot about the character especially if you’re someone who’s unfamiliar about Kaido. 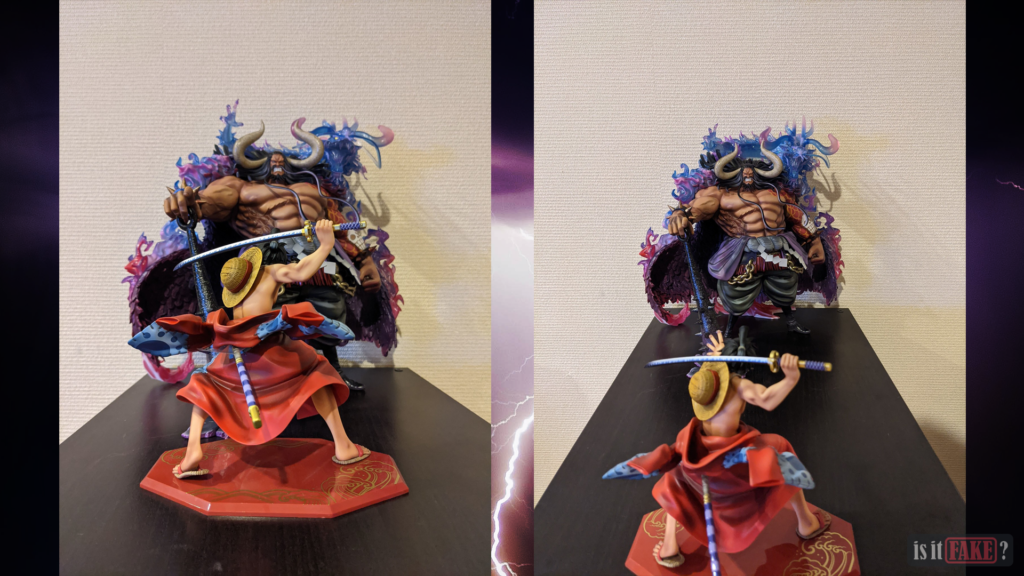 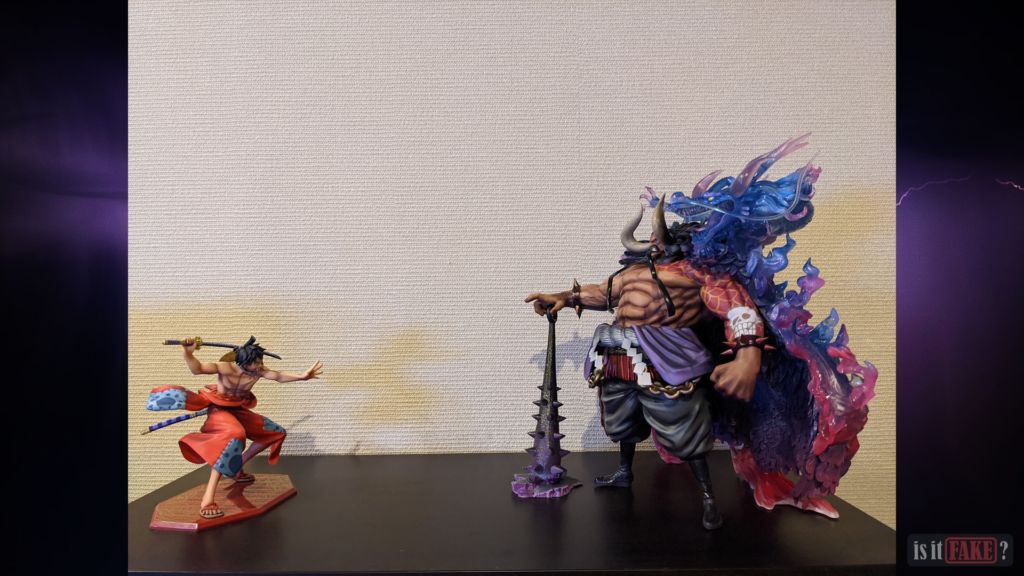 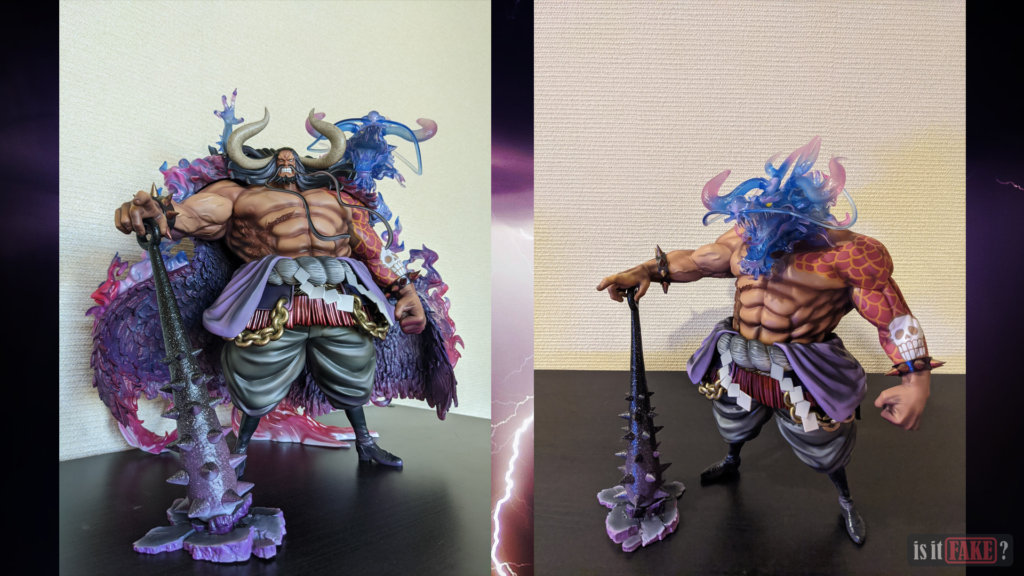 Facing with its Warrior’s Alliance [WA] counterpart, the Luffy figure obviously isn’t even match with the Kaido figure considering the details and the size. The Kaido figure truly deserves the Maximum classification tag.

Hardcore figure collectors are so into this kind of figure. What kind, do you ask? The type of figure that’s pricey yet give a lot of ROI because it’s such a massively-detailed piece. There were no room for errors when they made the WA-MAXIMUM Kaido figure, that’s for sure.

There’s nothing bad we could say about this figure, but that it’s too bad we couldn’t get a second one. A perfectly-sculpted item that’ll make you wonder how every fine edge was carved. Kaido definitely gives the chills from this design, and that’s the vibe you should be getting from him when he’s on kill mode.

This figure is an S Grade figure for sure!