Hasbro’s My Little Pony is a media franchise that has not only survived near four decades of reimaginings, but benefitted from it. Case in point, My Little Pony: Friendship is Magic is the brand’s most successful incarnation to date. While initially created for girls, the show’s message of love, friendship, and harmony is so universal that it also made fans out of people outside its target demographic: young men who have taken to calling themselves “bronies.”

One of the keys to the show’s success is its loveable cast of characters. There’s nerdy magical prodigy Twilight Sparkle; gentle Fluttershy; sporty Rainbow Dash; elegant Rarity; and Pinkie Pie the crazy party animal. Last but not least, there’s everyone’s favorite country gal, Applejack – the representation of the virtue of honesty.

Strange then, that a bootleg of an Applejack plush doll should exist. Like many other Chinese online stores, DHGate is brimming with fake products.

It’s difficult to say who manufactured this specific My Little Pony: Friendship is Magic Applejack bootleg. Official products often feature licensing information on their packaging, but this item was delivered to us wrapped in no such packaging. Secondly, tags identifying the manufacturer are often attached to official plush toys. This doll bears no such tag.

It only takes a brief examination of the toy, however, to see that it’s riddled with a stack of other suspicious details.

Before we discuss everything that’s wrong with this fake My Little Pony: Friendship is Magic plush doll, let’s talk about what it gets right.

Simply put, it gets the basics of Applejack right. She’s an orange pony with yellow hair and three red apples as her cutie mark. Even the shape of the eyes closely resembles the official products’.

But it only takes another look to recognize the flaws. The first you’ll probably observe is how fake Applejack’s orange is far too rich, as if the saturation has been dialed up. Then there’s the issue of the fake’s body shape.

The official My Little Pony: Friendship is Magic ponies have always been chubby. That’s what makes them adorable. But chubby doesn’t have to mean shapeless. Unfortunately, that’s exactly what the fake is: shapeless.

Fake Applejack’s trunk is so thick that it lacks definition. She has no neck; her head is directly fused to her trunk, which in turn slopes downwards to a tiny butt. Her fat limbs are nothing but jointless stumps, and the feet are rounded blobs, giving no indication that she has hooves.

In contrast, the real Applejack doll’s body, while plump, still retains the graceful features of horses and ponies. She has a curved neck, as well as a curved back that slopes upwards to produce a perky butt. You can see the joint that connects the shapely thighs to the lower legs. Her feet are slightly pointed at the front and are flatter at the bottom. 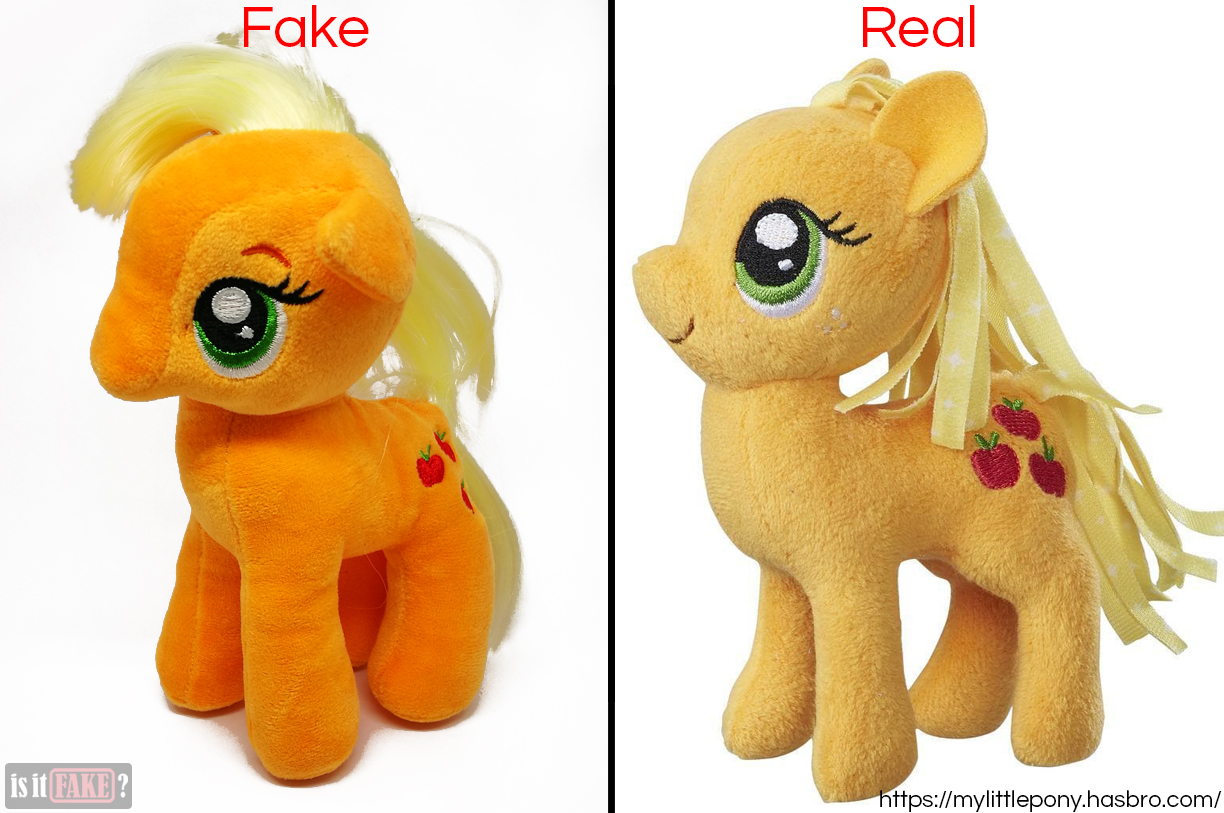 The head is just as problematic, if not more so. As you can see in the images above, fake Applejack’s snout is drooping, making it look like a stubby anteater snout rather than a pony’s muzzle. The ears are folded forwards, which is extremely unnatural for both real-life ponies and the fictional ponies of My Little Pony: Friendship is Magic.

In contrast, real Applejack’s muzzle and ears are just like her butt: perky!

The fake also has eyebrows, whereas official My Little Pony: Friendship is Magic ponies don’t.

A last note about the details on her face: fake Applejack doesn’t have white freckles on her cheeks. To fans of the series, this is tantamount to blasphemy, as those freckles are part and parcel of who Applejack is. The problems keep multiplying the closer your scrutiny.

The stitching is extremely noticeable on the fake. In some places, you can even see the white thread sticking out of the seams.

Said stitching is particularly bad on the face, where the lines are so stout and deep they make fake Applejack look like some kind of Franken-pony. From certain angles, it appears she doesn’t even have a mouth. But she does. It’s just hidden beneath her muzzle, where the needlework is so hideous it gives us the impression that there’s a mini-black hole sucking in all the surrounding matter, starting with her mouth.

You can see more abominable knitting on her back, which has led to an ugly, corrugated line of bunched up felt to run from the back of her head all the way down to her butt.

Speaking off her butt, the apples of her cutie mark seem to be sliding down her flanks.

And then there’s the matter of her hair. Many strands are of differing length, while others are scraggly and stick out in various directions. This leads to a look that resembles an old, dirty brush. The hair on the top of her head is particularly uneven. Hasbro’s official My Little Pony: Friendship is Magic plush dolls are not only well-made, they’re extremely affordable too.

Yes, the fake is cheaper, but that’s not necessarily a good thing. Cheap stuffed toys, especially those made in China, are more likely to be tainted with hazardous substances, from heavy metals such as lead and arsenic, to fire retardants. Prolonged exposure to these toxic materials have been linked to numerous health problems including skin irritation, complications in the reproductive system, and cancer.

As small children have the habit of putting things in their mouths – which is the quickest way to introduce these toxic chemicals into the body – tainted stuffed toys are particularly dangerous to kids.

Where to Buy Real My Little Pony Plushies

If you’re looking for any kind of My Little Pony: Friendship is Magic product, it’s best to go straight to the franchise’s developer, Hasbro.

Hasbro’s My Little Pony: Friendship is Magic website has a shop dedicated to toys. The cool thing about this online store is that it makes searching for products related to a specific character easy. For example, you can simply click on the “Applejack” button to see all the Applejack toys.

At the moment, two types of Applejack plush dolls are available, the $5 Friendship is Magic version and the $8 movie version. Standing 5 inches and 6.5 inches tall respectively, they’re both a tad shorter than the fake. They are, however, made of high-quality materials. The craftsmanship is also observably superior.

And if you want Applejack’s best friends in your My Little Pony: Friendship is Magic doll collection, make sure to check out the other items available on the store. 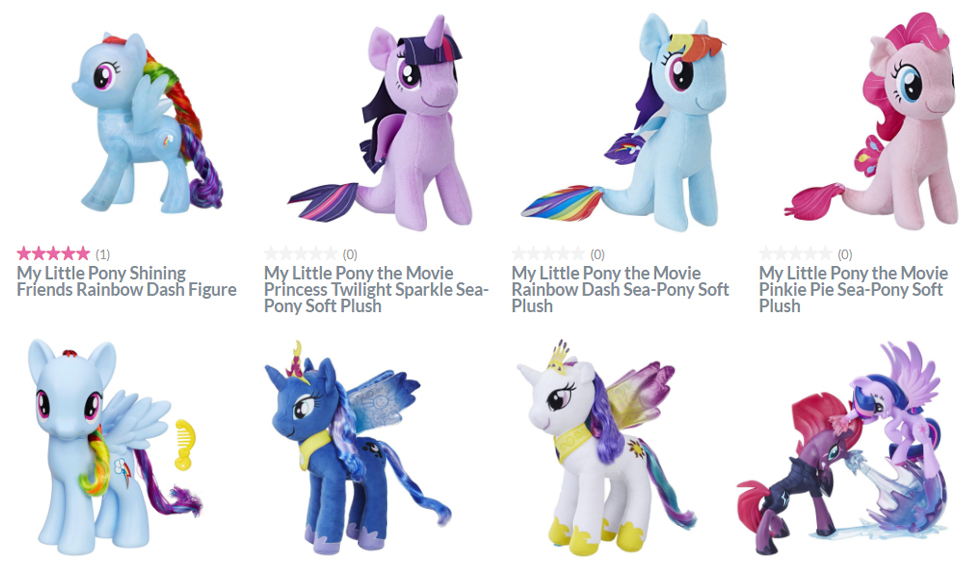 Other official My Little Pony dolls on Hasbro online store

The same Applejack plushies are also available for the same price at the hasbrotoyshop.com. Just click here and here. Older Applejack plush dolls, such as the two shown below, are no longer available on either online store. As My Little Pony: Friendship is Magic’s popularity shows no sign of slowing down, however, expect reissues and brand new toys to make their way to said stores every now and then. In other words, keep visiting these sites for updates.

There is nothing quite as unloveable as a counterfeit plush doll, and this fake My Little Pony: Friendship is Magic Applejack stuffed toy is no exception. With its deformed head, shapeless body, stumpy limbs, and coarse hair, it barely resembles the character it’s based on. And let’s not forget the fact that bootlegs made in China are more likely to be tainted with harmful chemicals. We’re giving this one a well-earned 70% terrible rating.