A demi-human who once experienced slavery when she was just a kid. Raphtalia was saved by the Shield Hero from enslavement and swore to be his gallant sword for whatever rough path they may take. She constantly enjoys Naofumi Iwatani’s attention, and because of that, she hones her skills with the sword to help him in his journey.

Raphtalia is a mix between human, a raccoon and a tanuki (a Japanese raccoon dog). Because of her demi-human nature, she changed appearance from a kid to a young adult in just several weeks. However, she still maintains a mentality of a young girl.

The character often switches from an adorable raccoon girl to a dashing swordsman. If you’ve been following the anime The Rising of the Shield Hero, then you must’ve been a fan ever since she appeared in the show. You will probably love this Raphtalia figure from Kotobukiya! 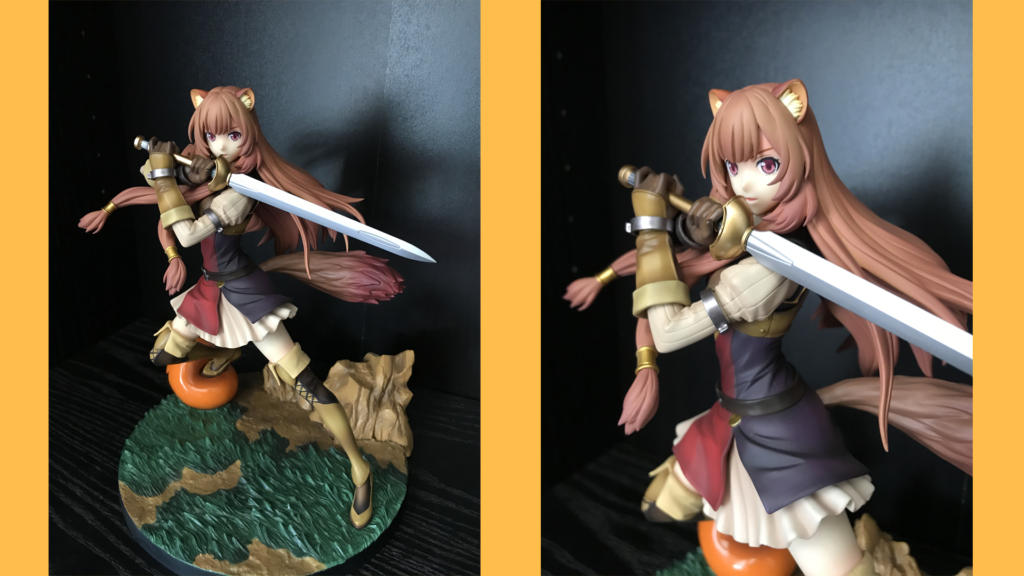 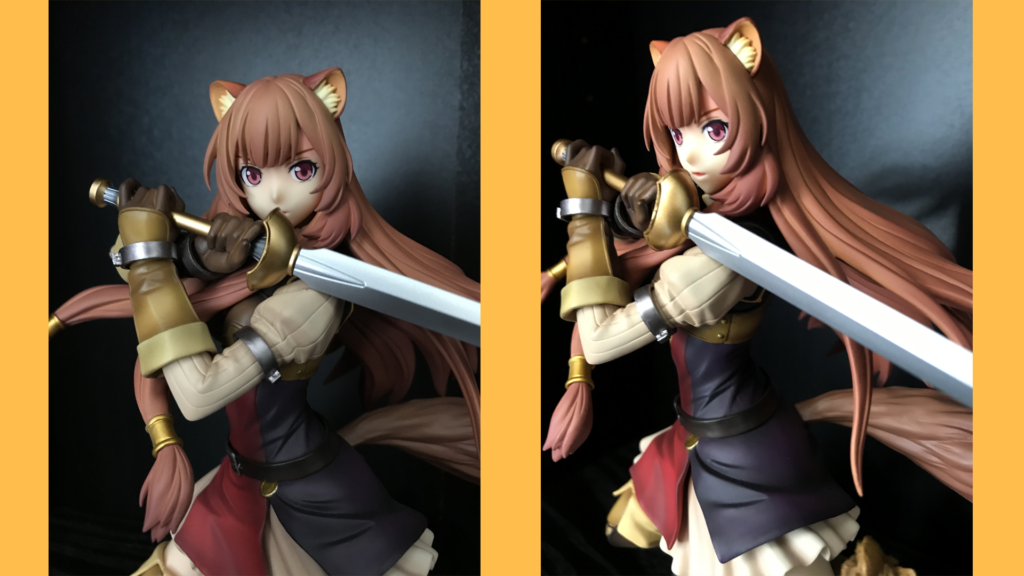 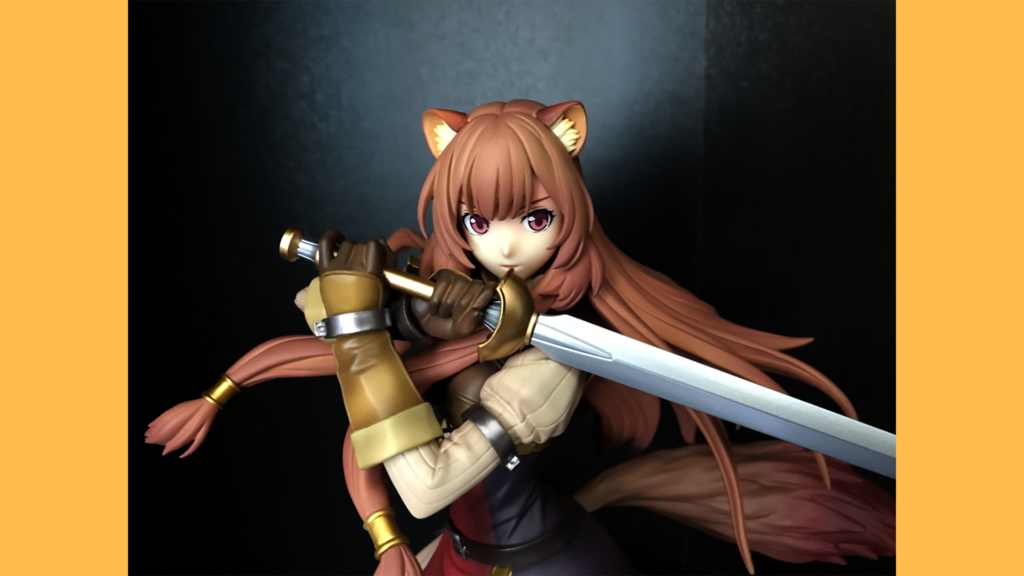 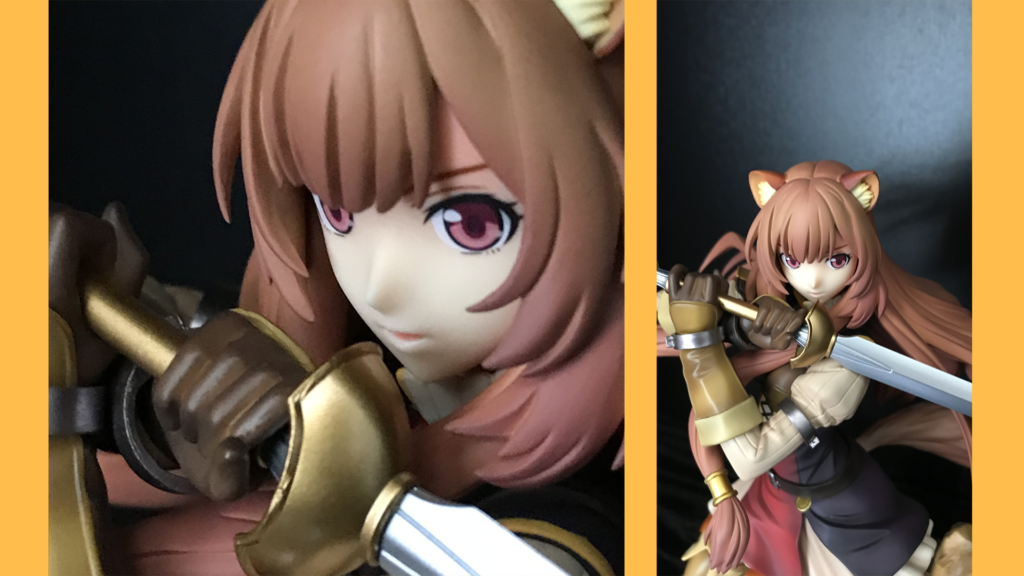 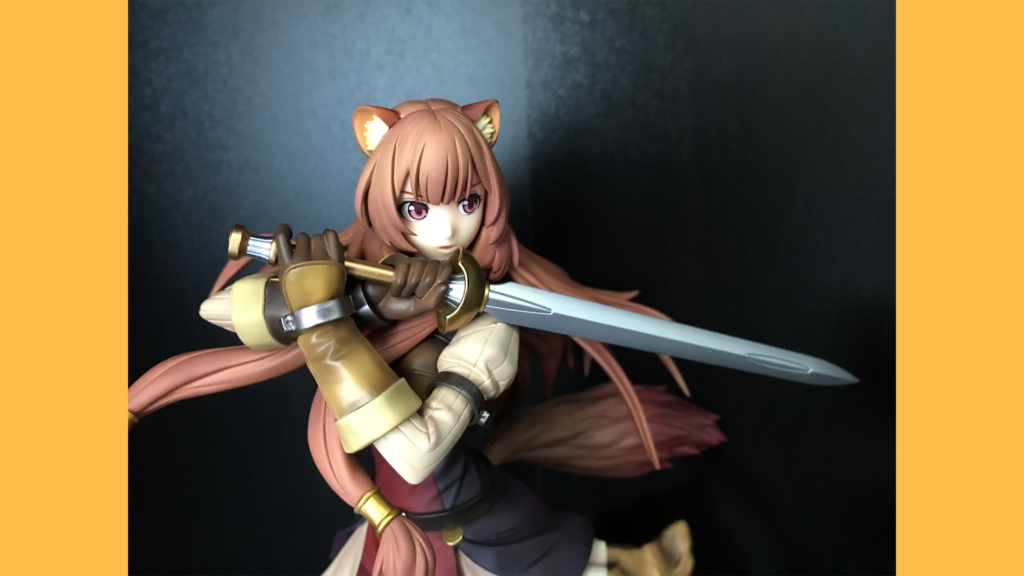 The Raphtalia scale figure from Kotobukiya features a gracious pose. To be honest, it’s a bit comic because she’s stepping on a balloon monster ignoring the fact that she’s holding a sword to kill it with.

Looking closely, you’ll see that the fur and hair is brilliantly carved. The texture feels smooth and the colors mix well. The shading feels like alive, and you’ll notice on the crumpled leather gloves.

The eyes are detailed enough to stare. It’s like the real character gazing upon you with finesse. You wouldn’t be able to tell that’s she’s just starting to hone her sword skills at this point if the balloon monster prop isn’t there. 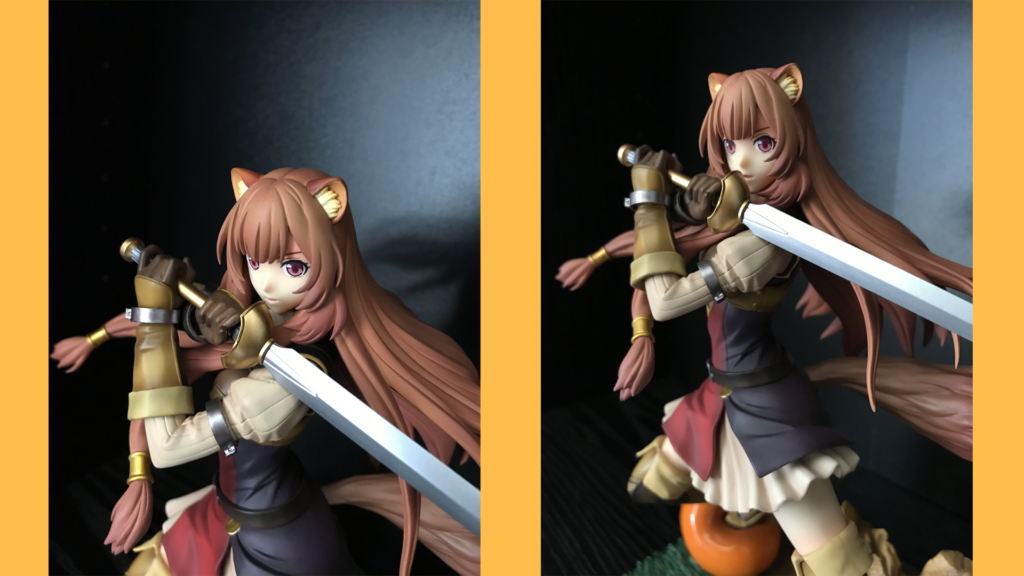 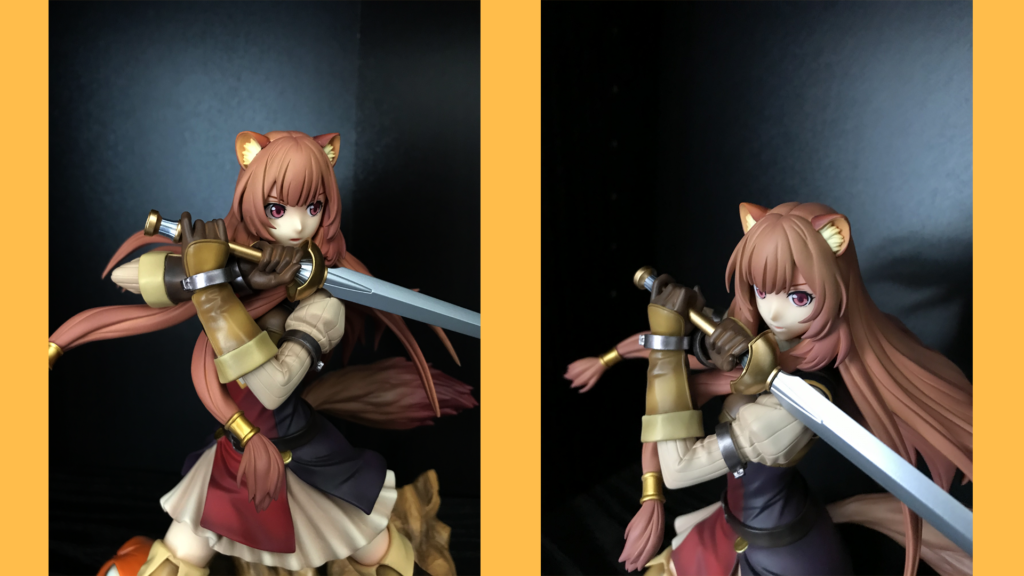 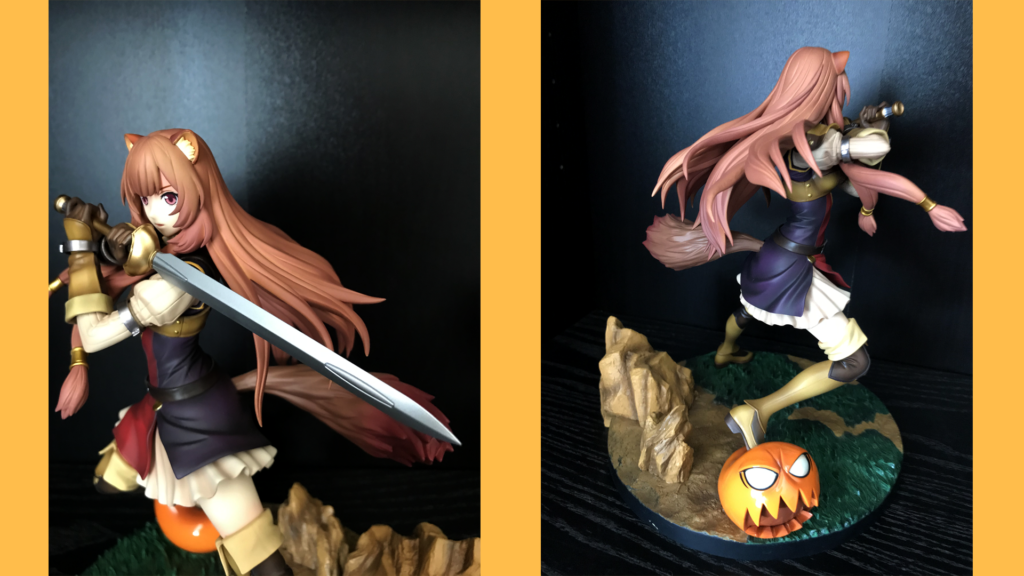 You can tell that there’s movement in the pose as the outfit brushes to the right. The tail, on the other hand, hangs still implying a bit lunge sideward. And to be fair, this is still the original outfit of the character.

If you look closer at the figure’s accessories, you’ll see that they are painted accurately. The hair band, the silver bangles on the figure’s arms, not to mention the lusterous sword Raphtalia has. 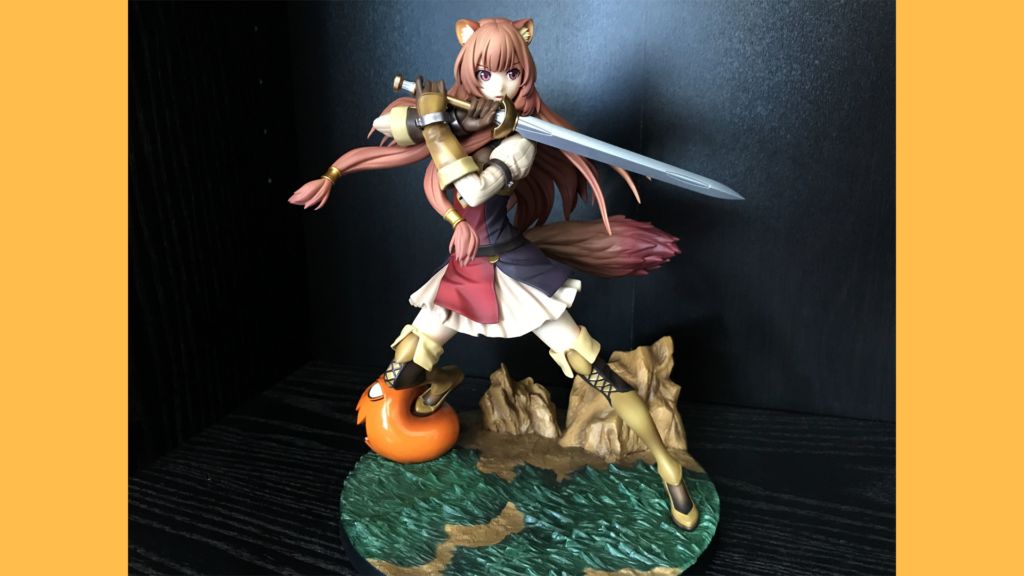 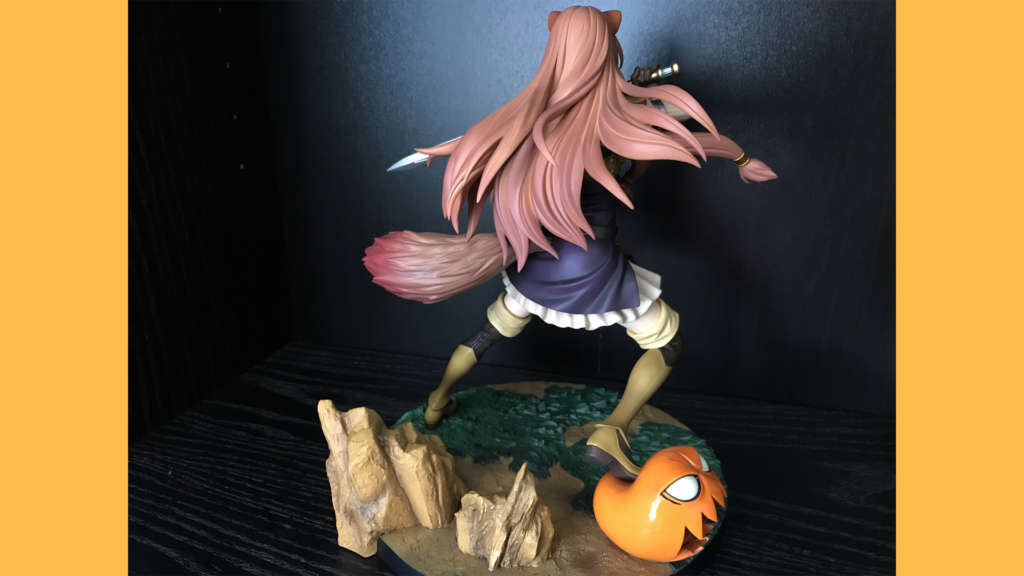 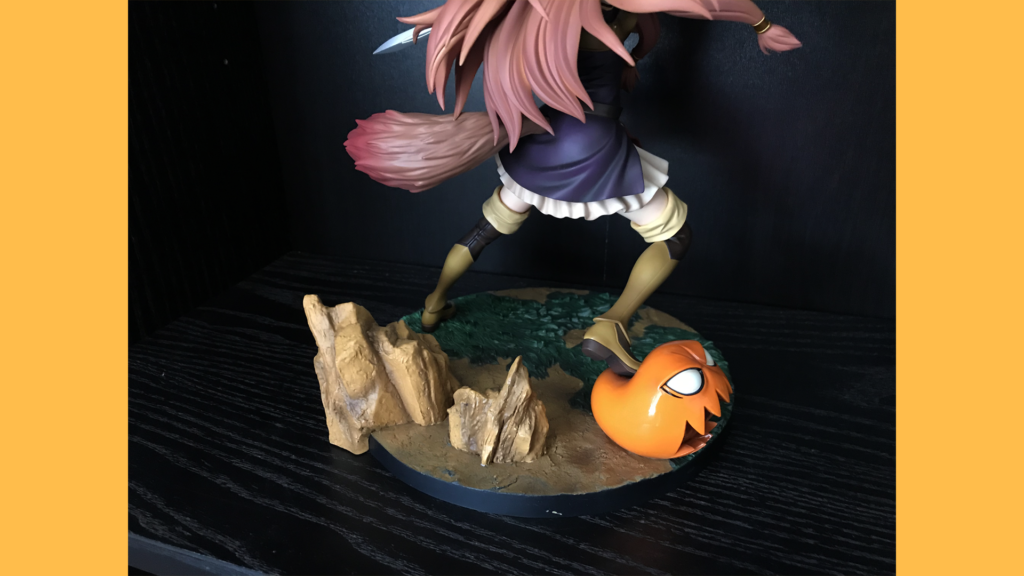 The Raphtalia figure isn’t the only one that deserves attention. Just look at that base — a scale figure with a detailed base stand!

You can feel the wind whooshing over the field Raphtalia’s stepping on. To be honest, the rocky surface can do better but how awesome can the grass get? It definitely looks artsy. Arguably, Kotobukiya could’ve done the base better, but the still kicks to the core.

Believe it or not, the price can go as much as $250 USD as the stocks are only limited. It isn’t available on KotoUS anymore, sadly. So your best bet is to look for other collectors that already have it.

The Raphtalia figure by Kotobukiya is definitely an eye-candy! The pose suits the character and the color harmoney feels alive. The figure looks flawless! The figure also includes a packaging and a magic sword. You can check out Kotobukiya for more information on the Raphtalia scale figure!

Needless to say, Raphtalia is stylish in this design. No wonder there are a lots of collectors after this item. She truly deserves an A+ grade!