If you’ve ever played old Super Mario games, then you’ve experienced being powered up by a magical mushroom. A mushroom so iconic to the game that it eventually evolved to a character who we now call Toad.

In newer Super Mario games like the Super Mario Odyssey, Toad is now seen in various appearances like Captain Toad or Music Toad, but he’ll always be Mario’s mushroom-headed support. So if you ever spot a mushroom character dressed in a slightly arabic get-up then that’s him.

On the brighter side, San-ei is well-known for making Japanese plushies out of Super Mario characters. And as a result, they brought Toad to real life by giving him a chance on their Super Mario All Star collection of plushes. Although, the plush is facing a bit of a problem caused by piracy.

Unfortunately, illegal reproduction of Super Mario plushes has been an on-going problem for San-ei. This is because bootleggers always like to take advantage of an item’s popularity. For that reason, they could steal a large sum of cash from the manufacturers — through piracy!

Admittedly, dreamcastle store sounds like a legit name for a vendor. However if you look at it the other way, AliExpress isn’t a reliable website to shop for plush dolls to begin with. The website is full of bootlegs, in fact, and it’s just better to stay away from it if you’re looking for popular items with the best quality possible.

Let’s say that many manufacturers do have their toys made in China. For obvious reasons, it’s much cheaper if a manufacturer will mass produce a toy, a plush doll for example, in the country. With some exceptions, however, some manufacturers just produce the item in their home country since it will be much safer from being counterfeited.

To protect yourself from getting a counterfeit plush doll, have a look at this fake Toad plush doll.

Plush dolls are sensitive items, indeed. Their packaging should be a protective one since these items get torn easily if sharp objects come into contact. Although if it doesn’t get torn, you’ll notice some threads are already loosening out. The fake plush - back

For the fake Toad plush, we only received the item in a plastic courier packaging. Whereas, plush dolls sold by Amazon are always in thick cardboard packaging if the brand doesn’t include a box itself. For this reason, we can also tell how AliExpress doesn’t consider plush dolls on their website as a fragile item.

Nonetheless, you could already see a few flaws even though the fake plush is still in plastic. Close up on the fake plush's head Overhead view of the fake plush - back 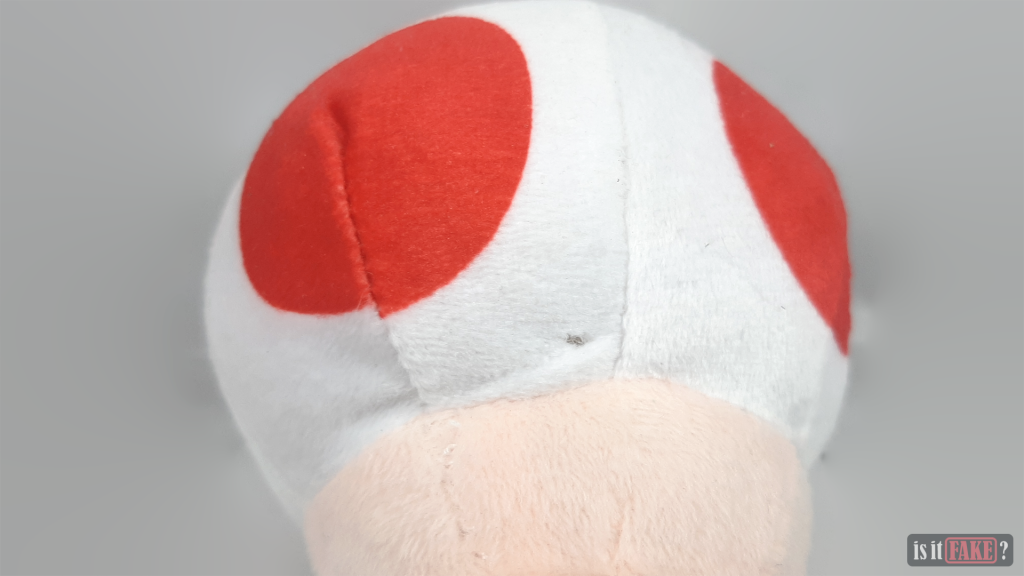 Torn part at the back of its head

For one, its head feels kinda off. It’s as if the inside-stuff isn’t baggy enough. And if you look close at stitch, the measurement is uneven as you see a small curve downwards its forehead.

You can already pick up a few flaws on its mushroom head alone based on the images above. Although it’s already safe to say that this is a fake, we still have to point out how terrible of a bootleg it is.

Some bootlegs are as almost spotless as authentic items. Such copies though, still give red flags like unimaginable price tags, or simply, the store from where you bought it. On the other hand, the fake Toad plush doesn’t belong in that group of counterfeits since it’s full of flaws besides those on its mushroom head. Zooming in on its eyes

The eyes are also noticeably defective since there’s no symmetry between the two. The right eye is also leveled down a bit although that case may be correct also for the original item — but we’ll see that one later.

If you haven’t noticed yet, the shape of its face also looks more bulky on the right side than the other while there are some visible threads on the back of its face. 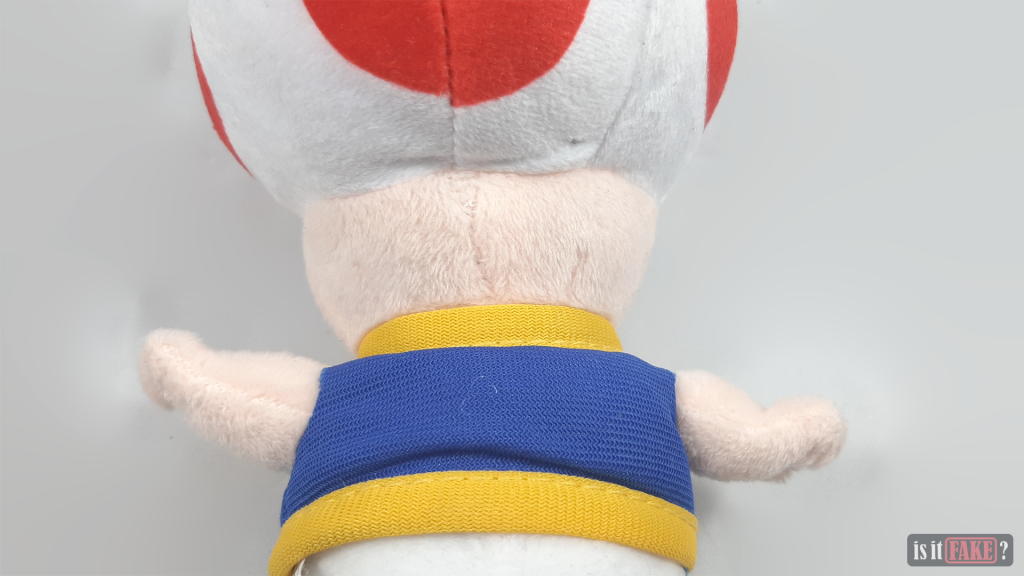 The fake plush's body - back 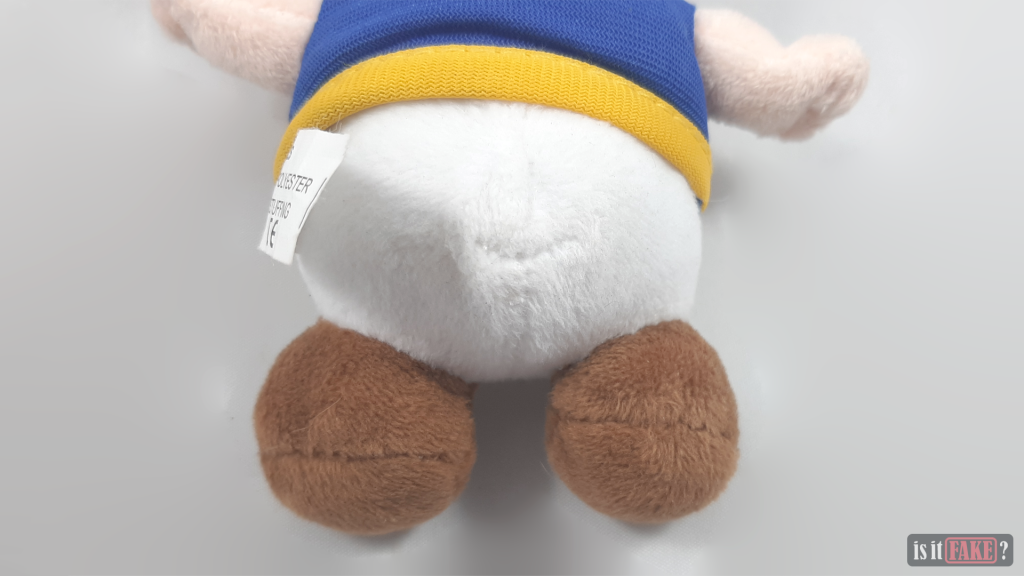 The fake plush's feet - back 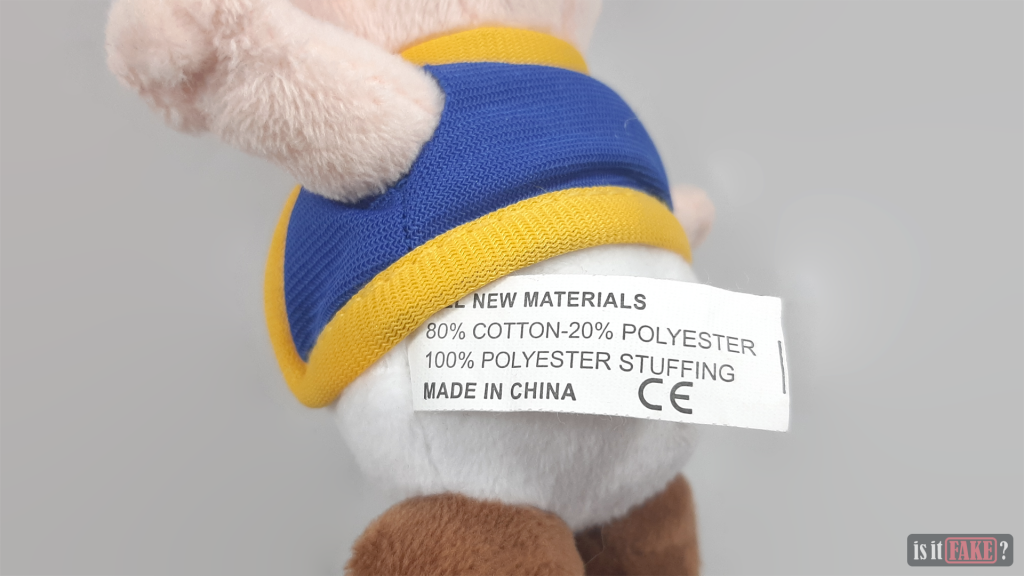 Speaking of loose and visible threads, there are far more of that found on its body.

If you’ll open the fake plush’s shirt a bit, you’ll see huge threads unevenly stitched on it. It’s kinda off since most probably, the authentic item made by San-ei will have the threads as hidden as possible for a proper presentation. If you think about it, the threads are also done carelessly.

In addition to the fake plush’s terrible stitching, you can also see that the hands are irregularly shaped. Although that might be another exception, there’s still a slight imbalance between the two.

Last but not the least for the bootleg, the feet are also in different sizes — plus its tag at the back that looks too generic. 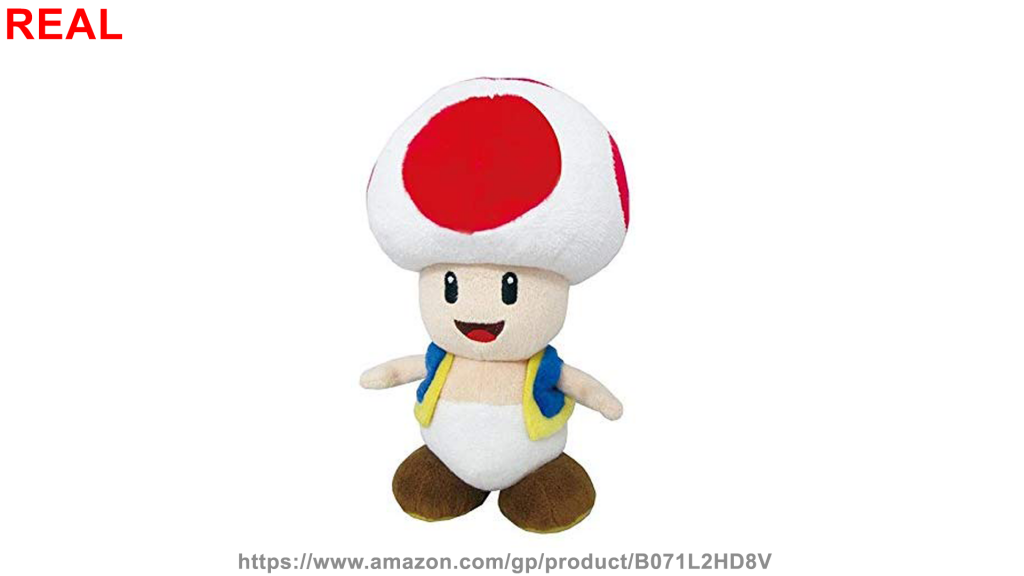 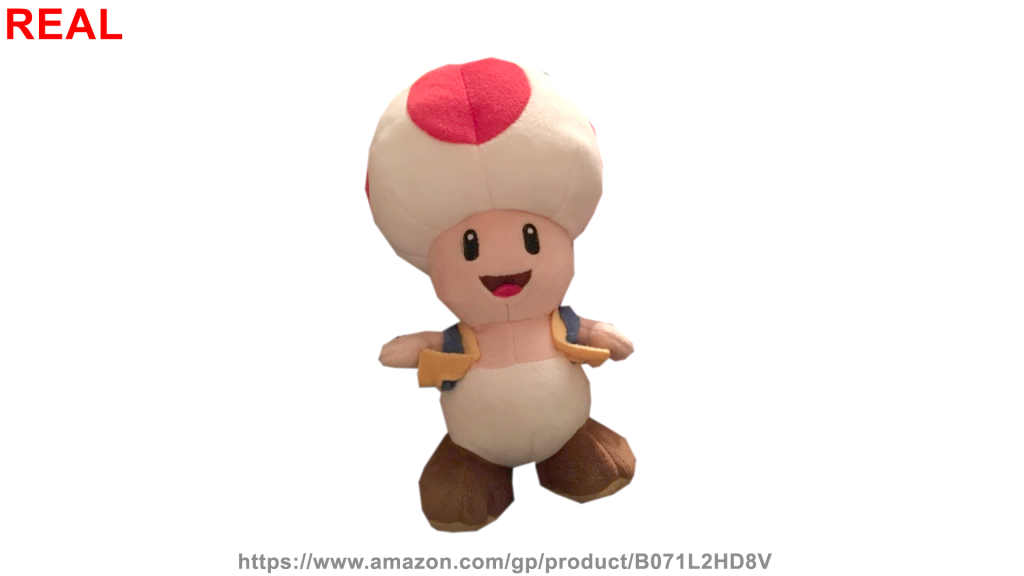 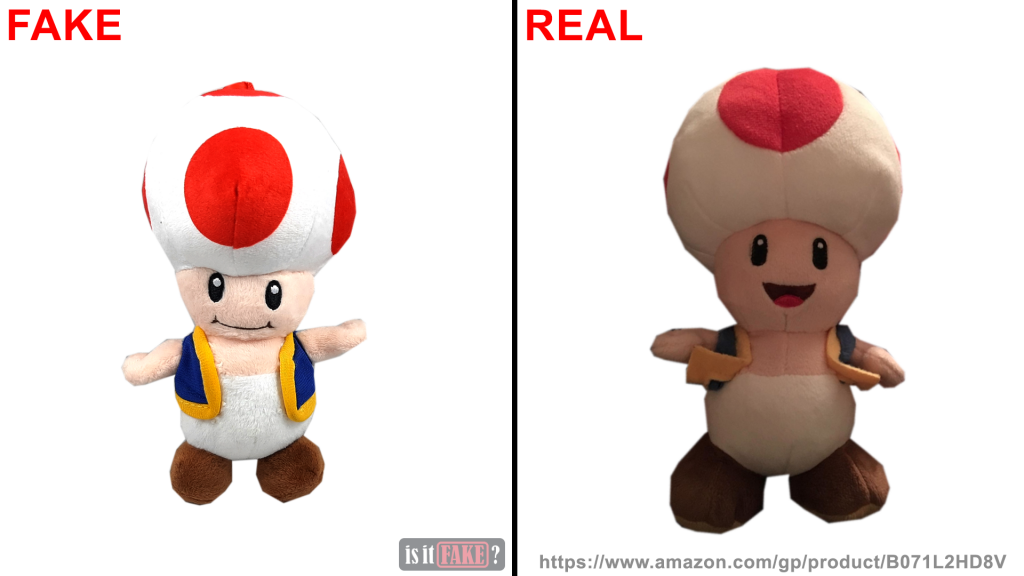 Going over the real San-ei Toad plush, you can see that the Toad’s head is adorably baggy. Even if you just look at online images of the character alone, you’ll be able to spot the flaw from the bootleg.

In addition to its cute appearance, the real plush also feels premium. Its materials should be in good quality, and the plush also looks in good shape with it. With a good reputation for Super Mario plushies, San-ei truly gives their best on these items.

If you didn’t know, San-ei also has their counterpart for making plushes in the west since their items are mostly exclusive in Japan. Little Buddy makes Super Mario plush dolls as well and they’re known to distribute the brand in the US — just a little trivia.

The fake Toad plush can already be distinguished for its ridiculously low price. Of course, you’ll still have to shoulder for shipping and handling considering that you’ll be getting it online. So, why would you go through that hassle for a cheap and deformed fake?

As for the real Toad plush, it has the desired qualities of the character for just several bucks. And while you’ll also pay for shipping, most legit websites offer these for a low price although it would still depend on your location. Apart from that, the item is handled in the best possible way.

WHERE TO GET THE REAL SUPER MARIO ALL STAR TOAD PLUSH

Currently, the best way to get the real plush is on Amazon. Although you might be confused with the product branding, but still it’s a licensed plush — as we also mentioned about Little Buddy in the above section.

For around $12 USD, you can get the Super Mario All Star: Toad plush in Amazon.

Items on Amazon that are both handled and sold by them are completely legitimate items. Although there are cases that items get mixed up with third-party sellers, so you will still have to check if you did get the item that’s in the photo.

The fake Toad plush is just a generic plush that’s made to earn bootleggers their dirty cash. It’s still a torn piece of fabric that’s more out of shape than fat Bowser. It has a lot of hanging threads which you wouldn’t want to see on your collectible. It’s not something you’d want being displayed on your desks, but it can do well as a chew-toy for your pets, perhaps.

The plush doesn’t even deserve to be rated, but we’ll give this one a 90% bad rating.