With various Final Fantasy games being popular every release, there’s no doubt that Square Enix will be coming up with a spin-off including all the iconic characters from the franchise — and at last, came the Dissidia Final Fantasy series.

The first Dissidia game came out on the Playstation Portable back in 2009 and it was well-received by FF fans worldwide. Considering that it’s a 3D fighting game, it’s also packed with storylines of different characters across all Final Fantasy games.

With the series’ most recent release, the Dissidia Final Fantasy NT moves forward to better gameplay as well as better graphics on the Playstation 4. Of course with a new pool of characters to play with and to indulge their storylines with, Dissidia players will never forget the pioneer toon of the game — or so we say, the first Final Fantasy main character.

The Warrior of Light is based from the first Final Fantasy game and although the name sounds reasonable enough since it was only based on the knight class of the game. Nevertheless, he made a comeback as a character in Dissidia Final Fantasy with an enhanced look to match better graphics, and an enhanced background story.

As popular as the Dissidia series is, Square Enix pleased fans with its merchandise as well. Figurines are bound to be made, and so, the Static Arts: Warrior of Light figure was released in 2018. However, bootleggers seized the chance to make a copy of their own.

Bootlegs in AliExpress are without a doubt rampant. It’s cliché if we’ll just tell you to stay away from the website, but that’s just the simplest advice we can give. For your peace of mind, avoid such websites as there will be bootlegs in there.

On another note, if you do come across a vendor with a name that’s suspicious, then better take a second look.

Take ‘Fanbase powered by U Store’ for example. The seller’s name doesn’t have any ring to what it’s really selling. For sure, they could be selling gadgets, but then if you find a Final Fantasy figure, that just raises a red flag.

It’s thanks to Square Enix for making the Static Arts: Warrior of Light figure. For a sneak peek, it’s quite a remarkable figure for its thorough-detailed design. However, you’ll have to see the bootleg first to see how the real one is really valued.

A funny thing about bootlegs is that they’re mostly unpredictable. Whatever you get from the package, you wouldn’t know what flaws you’ll see from the bootleg figure, or if it’s even in a box. Needless to say, figures that don’t come in a proper packaging are suspicious enough. The fake Warrior of Light figure - back 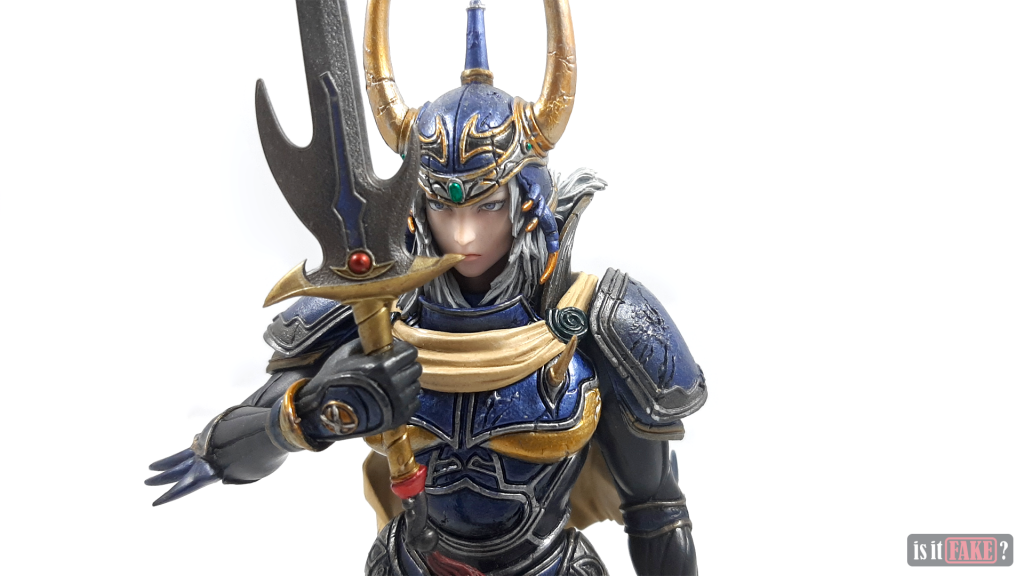 Close up on the fake figure 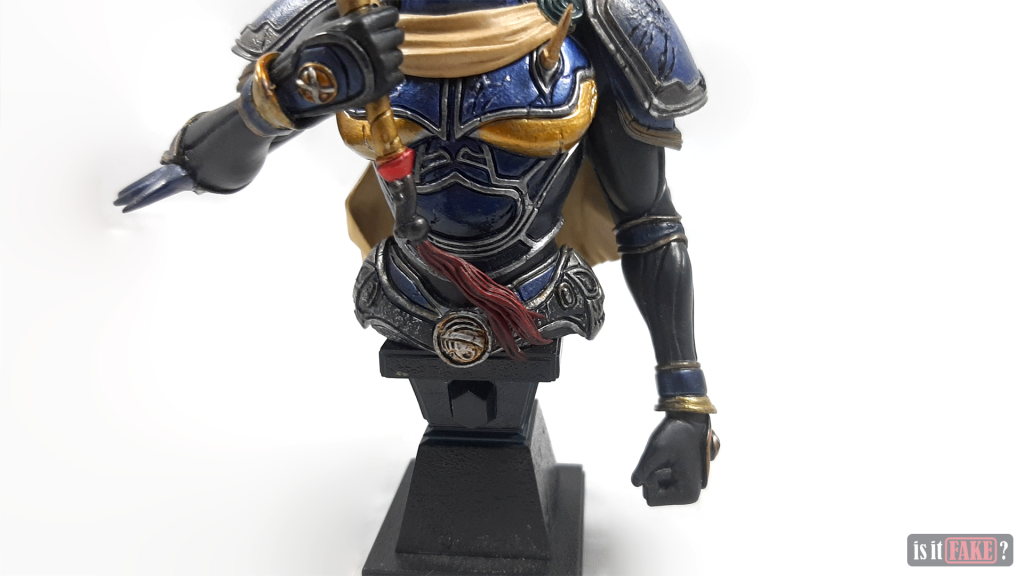 Close up on the body of the fake figure 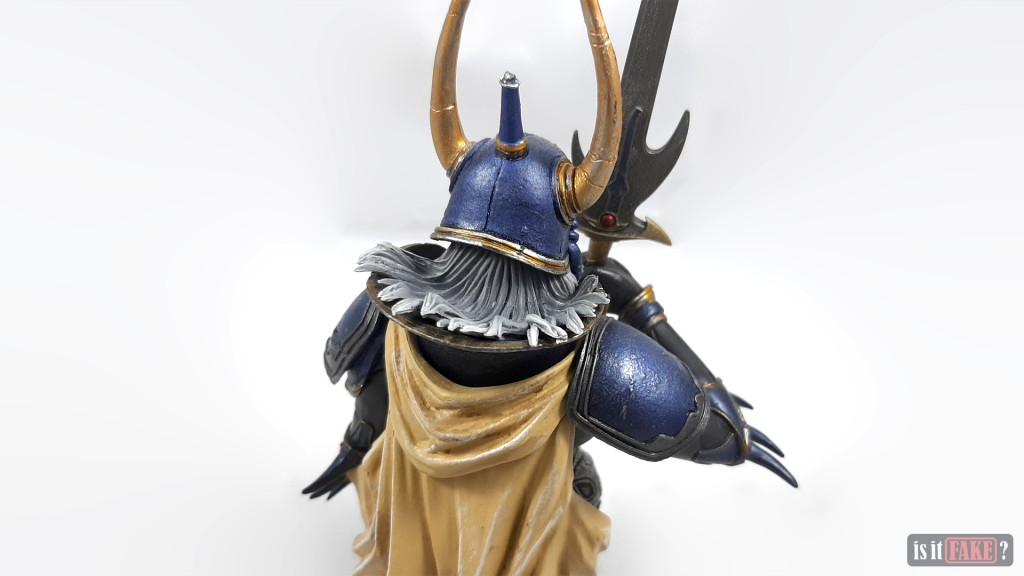 Close up on the back of the fake

Admittedly, the fake Warrior of Light figure looks really detailed, and it’s hard to spot the flaws since the design was made to have dents on it. What tipped us off is that it was only in a bubble wrap inside the courier’s packaging — that’s all. Of course, we were also suspicious about the price, but more on that later. Zooming in on the front helmet, face, and sword A view of the body at a different angle Details of the fake Warrior of Light figure from its left The fake figure's right arm side Lower belt of the bootleg - right side 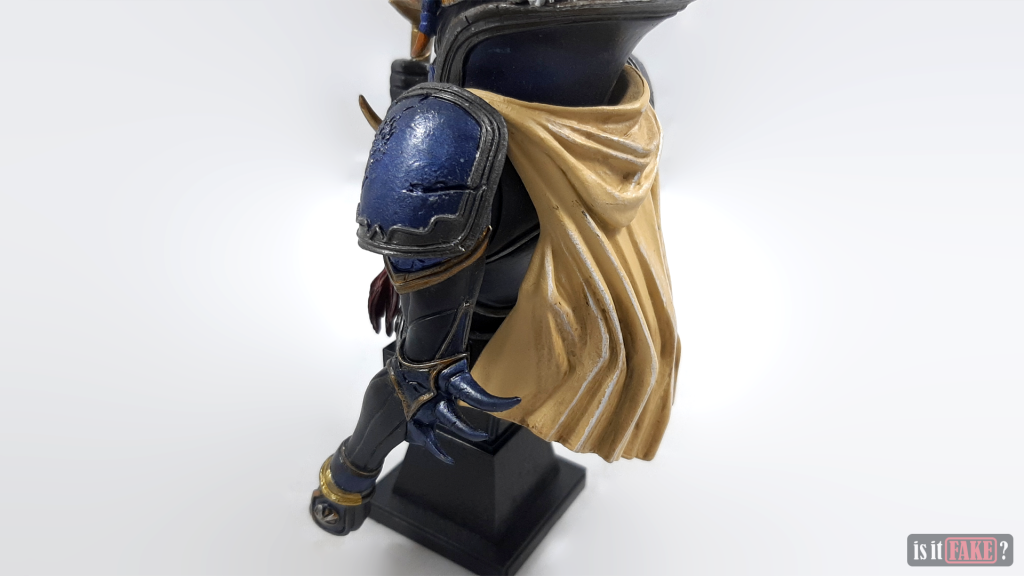 A different view of the fake figure's back

If you look closely at the bootleg, there are hardly any spottable flaws, but if you think about it, bootlegs aren’t just categorized by flaws alone.

Digging into a better description of bootlegs, these items are unauthorized to be sold. It means that the product didn’t meet the manufacturer’s standards, and so, the item is thrown off to the “defective” trash bin. To put it simply, it didn’t pass quality control.

For what reasons did it fail quality control, you ask? Let’s look at the figure for a second time. Dent on the fake figure's helmet Zooming in on the fake figure's hair

The first dead giveaway the figure gave was that it has a dent. This is a sign that it’s missing a part. And if you turn the figure, you’ll see some odd edges on its hair strands. It seems that there’s a lot of powdery stains all over it.

Some parts are hard to tell though since the bootleg’s appearance is almost as close as the real one. Scratch on the fake figure's sword 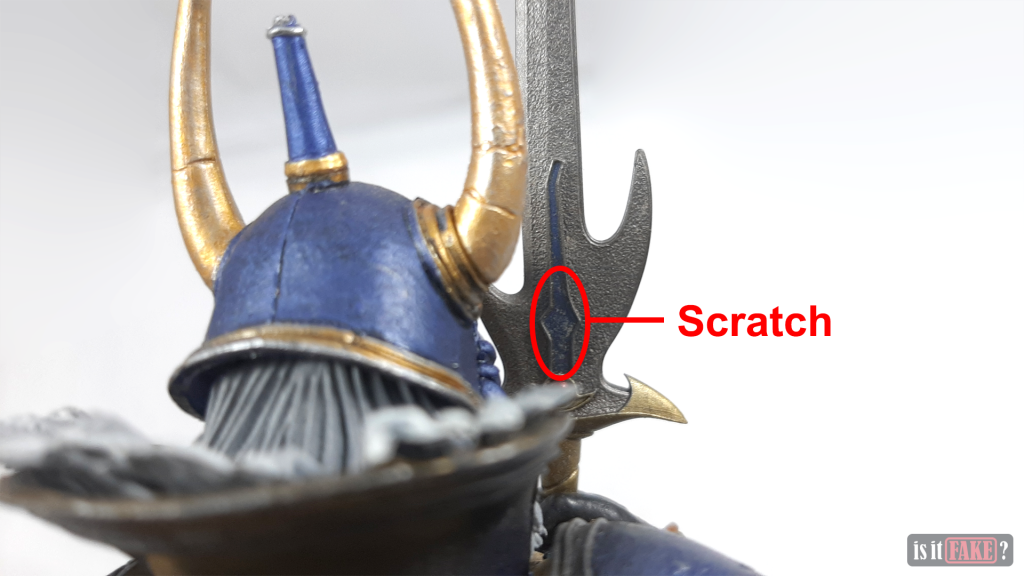 Scratch on the back of the sword

Another flaw that’s worth mentioning are the scratches on the sword.

If you look at the images above, you’ll see that the sword has a tiny scratch at the front. At the back on the other hand, there’s a handful as well although it could be harder to spot since it’s at a hidden angle.

Faults like these make a figure hard to keep, and so if it’s defective by even a millimeter of mishap on it, then it’s not worthy for release. 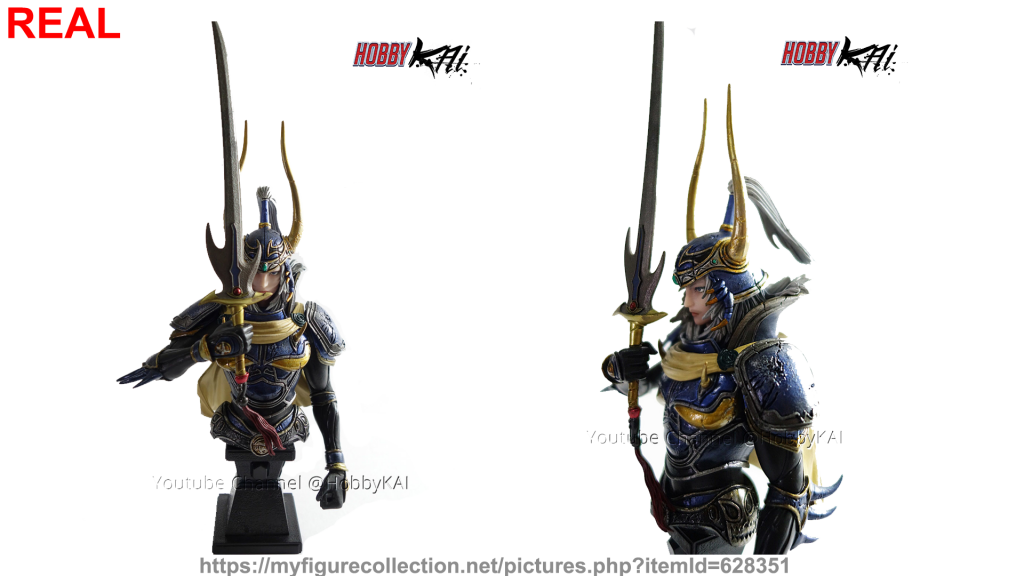 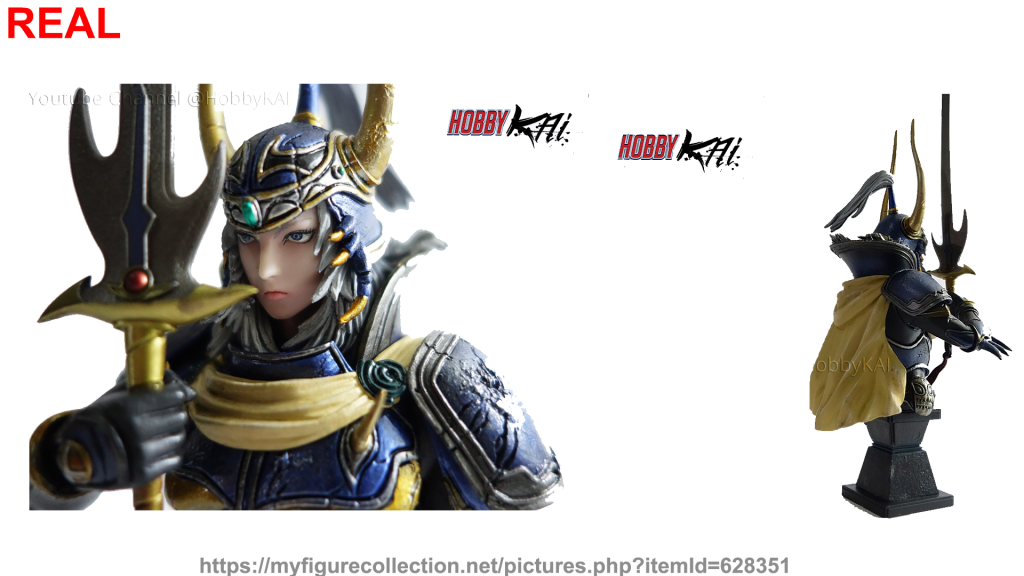 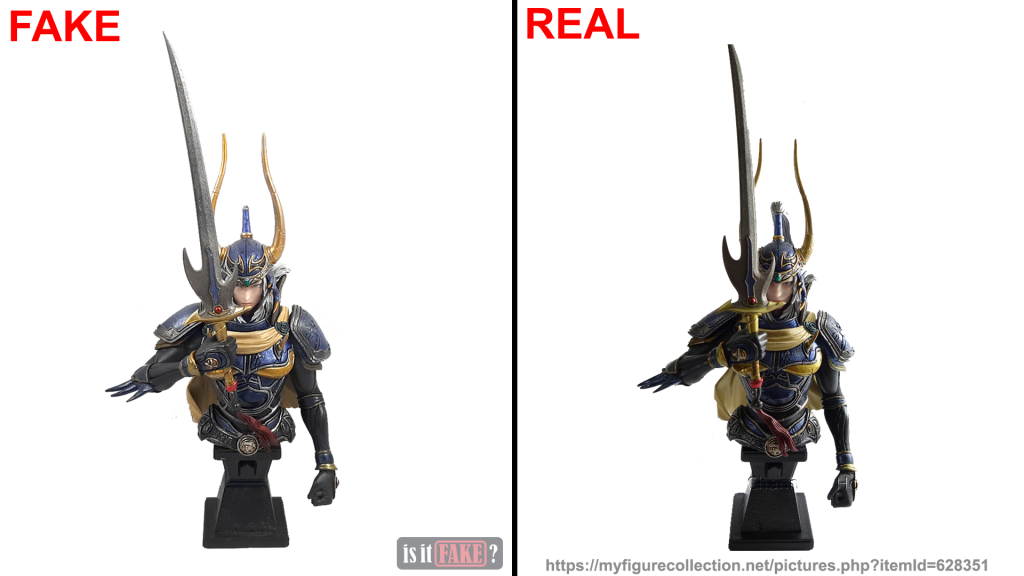 Looking at the real Static Arts: Warrior of Light figure. You can barely notice any difference other than the cut-off ponytail on the bootleg’s helmet. Overall, the real figure still wins with its more vibrant color and flawless appearance.

Nonetheless, the fake Warrior of Light figure is more or less a defective figure that was thrown off. Considering that it has met some of the qualities of the real figure, it’s still a failure and unworthy to be called authentic.

On another note, bootlegs don’t really increase in value as much as defective figures. This has always been the downside of knockoffs. Without a doubt, collectibles are also involved in the culture of trade among collectors. So if you’re showing off with an unauthorized item, then you’re most likely going to be casted aside.

The fake Warrior of Light isn’t cut out for its price tag. Who would even spend almost $10 USD for a figure that’s defective?

Once you realize that it’s a factory reject, it’ll forever be labeled as a bootleg which you wouldn’t want in your collection of Final Fantasy figures. Nevertheless, you’ll be disappointed with its lackluster appearance.

On the other hand, the real Static Arts: Warrior of Light figure is an exclusive item. It’s a bonus item that came with the Final Fantasy Dissidia NT: Ultimate Collector’s Edition. So basically, you have to buy the game and the collectibles that come with it for $129.99 USD.

For a collector’s item, it’s surely worth it, and remember, authentic figures have a high resale value. Considering that this is an exclusive item, the price of the real figure rises in parallel to collector’s demand.

WHERE TO GET THE REAL STATIC ARTS WARRIOR OF LIGHT FIGURE

Truth be told, the Static Arts: Warrior of Light figure is an exclusive figure. Meaning, you can only get the brand-new and authentic from the Final Fantasy Dissidia NT: Ultimate Collector’s Edition.

The whole game is for the Playstation 4 console and it’s priced at $129.99 USD on Square Enix’s website. It includes various of collectibles as well as digital content. And yes, especially, the Static Arts: Warrior of Light figure in a box.

Looking for the figure alone could be a hard task, not to mention a risky one. Many collectors might already be keeping theirs in stock since, well, it’s an exclusive item — you won’t get it anywhere else.

And if you’re going to risk of buying it online, then you’ll just be finding a lot of bootlegs. In the end, that’s a risk you’ll have to take and it’s your money to spend to begin with. But, don’t say that we never warned you!

The fake Warrior of Light figure may have a few flaws, but still, these are unacceptable faults. That is why the figure was thrown away to the manufacturer’s ‘reject’ bin. It should have stayed there, but the bootleggers are sneaky as heck.

Regardless, the fake Warrior of Light figure isn’t cut out for its severed helmet and scratched sword. And for that, the figure deserves a 70% awful rating.