A truly unbeatable classic title. Final Fantasy made its way to many consoles with many games varying from strategy, tactics, and especially its signature turn-based gameplay. The stories of each of the title’s major games (Final Fantasy I to XV) are totally out of this world. The universe of Final Fantasy is just creative making it a long-going role-playing game.

Through the game’s journey for more than 30 years, characters like Cloud, Squall, Tidus, and Noctis have become popular to many fans of the series. In fact, many characters from the Final Fantasy series are first choices in cosplay events. You wouldn’t even believe that environmental beings from the game also point out the positive reputation of the series — for example, the Chocobo, which if you see one, you’d already guess what game the tall, yellow bird is from. And if you’ve played even just a single game of the series, you could already tell which race has knack of saying ‘kupo…!’ every time you talk with them although they could be real life savers — literally!

Moogles are covered with fur, float with a tiny pair of wings, and have a red pom-pom on their heads. They’re known for their incomprehensible language in the early games of Final Fantasy. As the series’ mascot, they’re a race who’d just pop out a speech bubble full of ‘kupo’ in many variations. With that in mind though, they are still intelligent beings and are also known for saving your progress in older consoles like the Playstation 1 & 2. Besides the cute and adorable Chocobos, the Moogles have also achieved the iconic status which also puts them in danger — the bootleggers being the #1 cause.

Shopping online can get a lot risky especially if you don’t have any details about the website you’re browsing in. More importantly, you should be wary about the reputation of the website by reading through reviews

Although AliExpress can be a pretty big shopping website, more frequently, you will encounter problems especially with the items. Sellers in the website don’t only sell bootlegs but reportedly, some items are also defective. Returning the items can also be a horrible experience because in that case, you’d be covering for shipping the item back. Regardless, the website just has a zerg of bootlegs.

Hands down to Square Enix for their continued hard work in making the Final Fantasy series an epic title. Nevertheless, they’ve taken advantage of the demand of fans to release adorable plushies including Moogle plush toys. So if you’ll ever come across a fake Mascot Moogle plush, then you better take note of these descriptions.

The problem with many fake plush toys is that they always miss out to provide a proper packaging. Well, it isn’t a problem for you since you’ll be able to tell easily that the item is to be avoided. For sure, the fake Moogle plush that we have is a cheap bootleg since it wasn’t inside a cardboard box but in a thin plastic instead. In fact, some official plush toys are delivered without a cardboard packaging. So, it’s hasty judgment to say that this Moogle plush is already a fake if you see it firsthand. The quality of its plastic packaging, however, seems a bit off. It’s thin, frail, and it could rip apart if it’s mishandled. No plush toy could ever survive this plastic if threatened with a sharp object. Nonetheless, the quality of the plush is affected throughout shipping. The fake Mascot Moogle plush - back 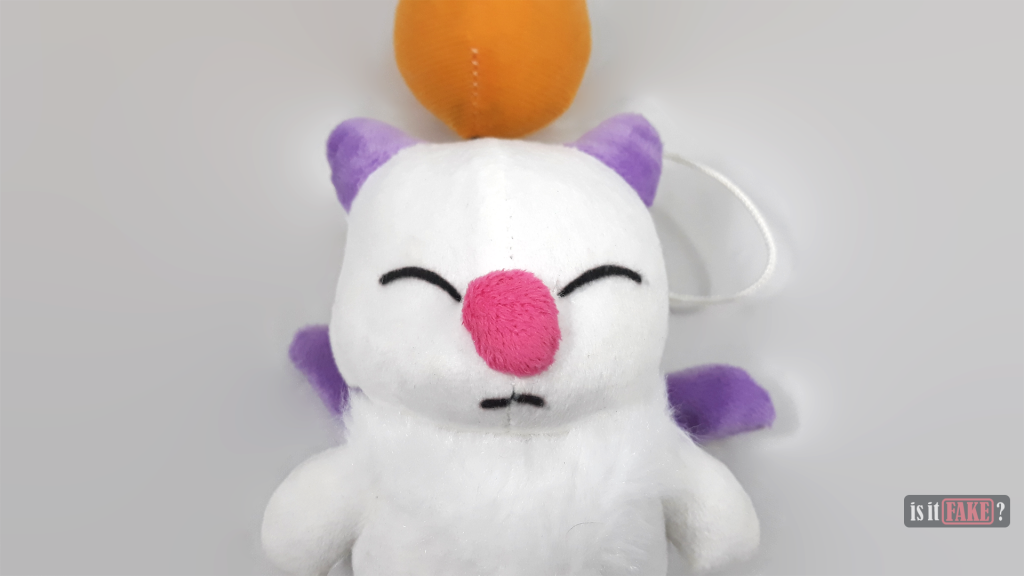 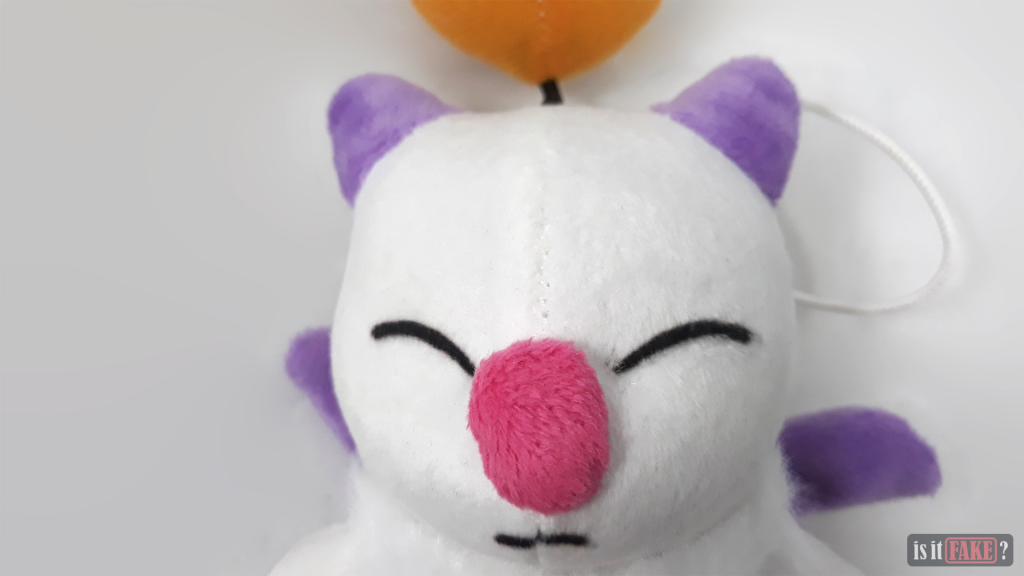 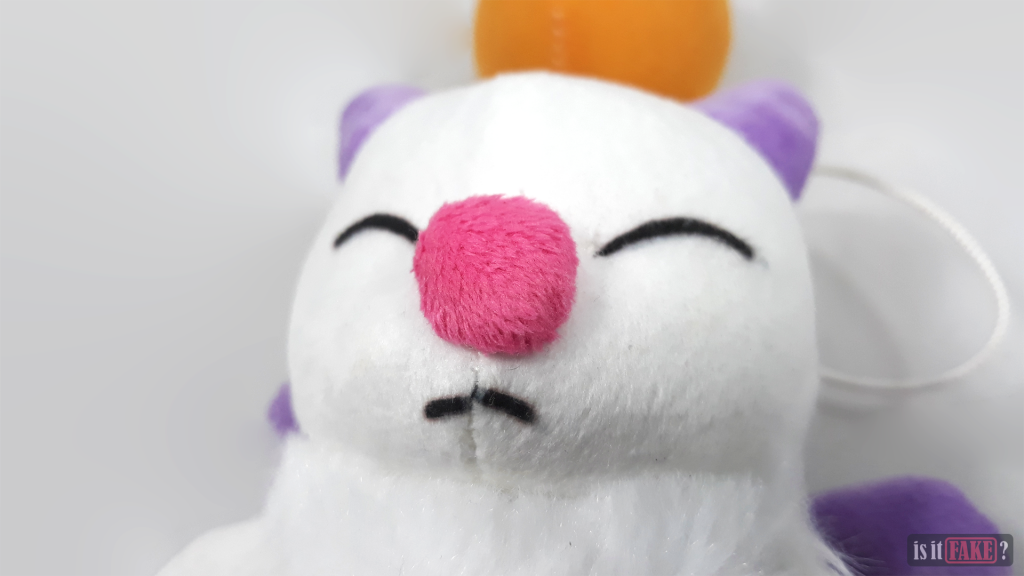 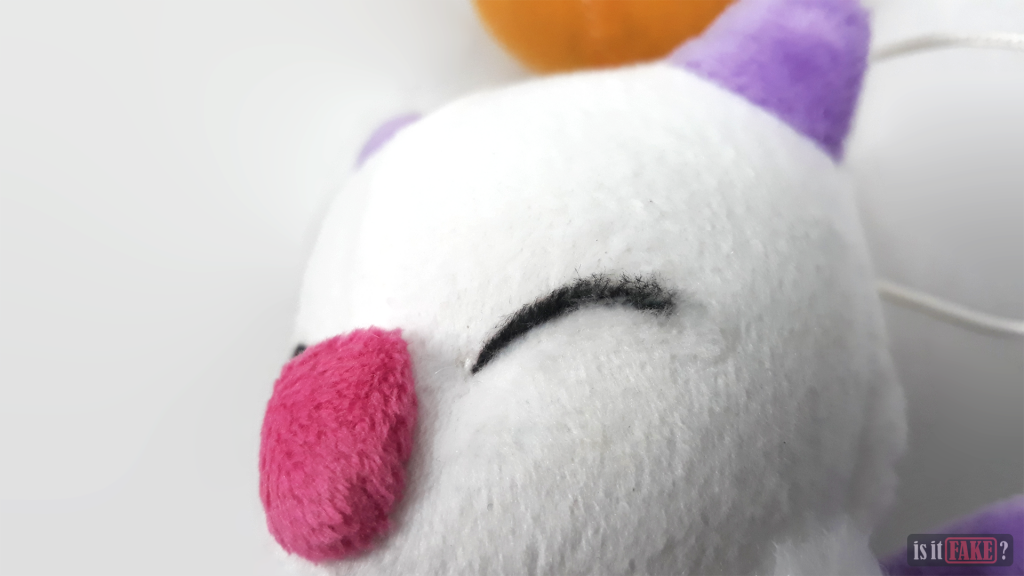 Faded pen for the fake plush's mouth and eyes

The fake Moogle plush, from the looks of it, is based off Moogles in Final Fantasy XIV, a popular online game. The plush has a ‘majestic’ fur wrapped around its neck, an orange pom-pom, and although its wings are far from being gargoyle-like, it must be reflecting a lo-fi version of the Moogle since it’s only a hang-up plush doll.

You may be fooled by its cute appearance but what lies underneath is still a despicable plush doll.

For a start, you should notice that its nose is deformed and a little bit squished. The misaligned mouth doesn’t help its current state and raises suspicion on the plush doll. What’s odd about the mouth and eyes are that they look faded — so upon looking closer at the suspicious black lines, the eyes and mouth are only drawn with black pen marker, or so it would seem.

The whole head feels a bit weird as well. Not only it is unevenly shaped, but it’s also stitched carelessly. You could see in the middle of the area that the head is barely holding together. Focusing on the fake plush's fur A closer view of the fake plush's back 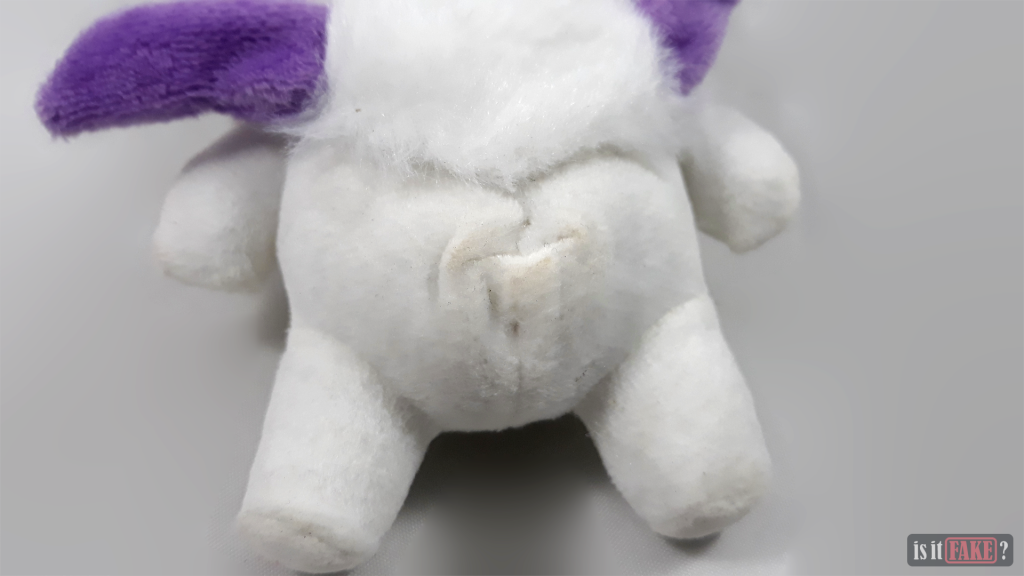 Hopefully, you get the sarcasm when we called its fur majestic. It is yet another awful area of the plush since the material plucks away easily. You might be wondering that the volume of the fur is already thin, but that’s just how low the quality of the material that was used in this bootleg plush. The way that the fur looks glittery when focused with light is disturbing as you’ll never know if it’s allergen-free.

Since we’re already at the back area, let’s take a look at its horrifying wings.

If you’re familiar with Moogles, or even any winged creatures, you’d expect their wings to be somewhat symmetrical. For this fake Moogle plush, however, the right wing raises up a bit which and wouldn’t match the other wing. This area is a hopeless case, and if you look underneath the wings, a smudged area of crumpled stitching can be found. 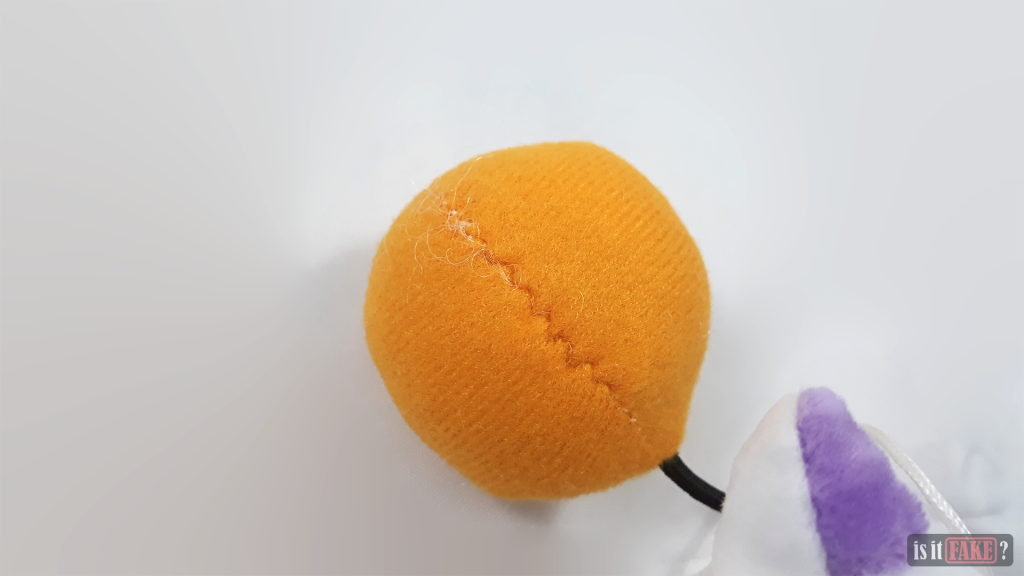 A tight stitching on the fake Moogle plush's pom-pom 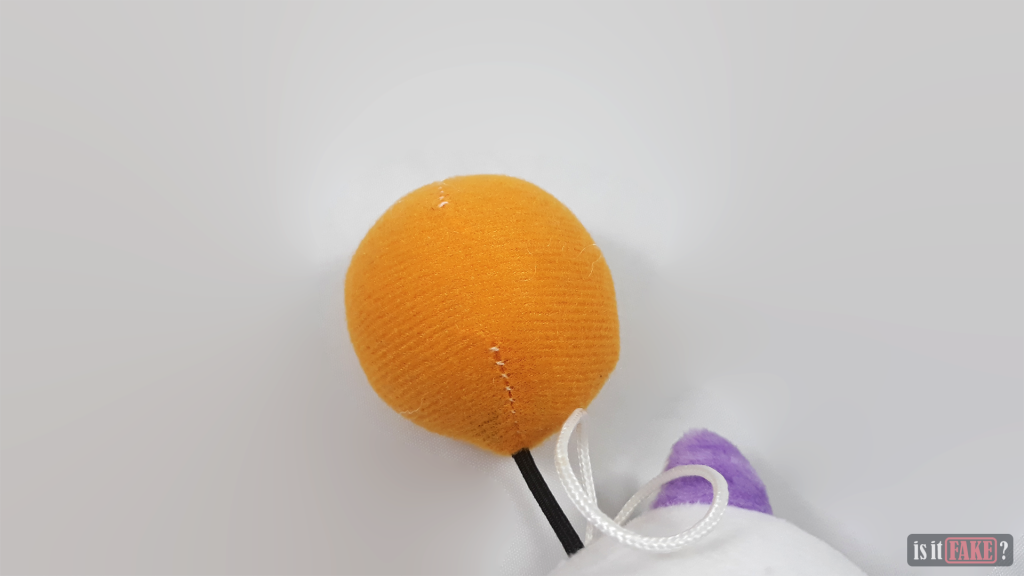 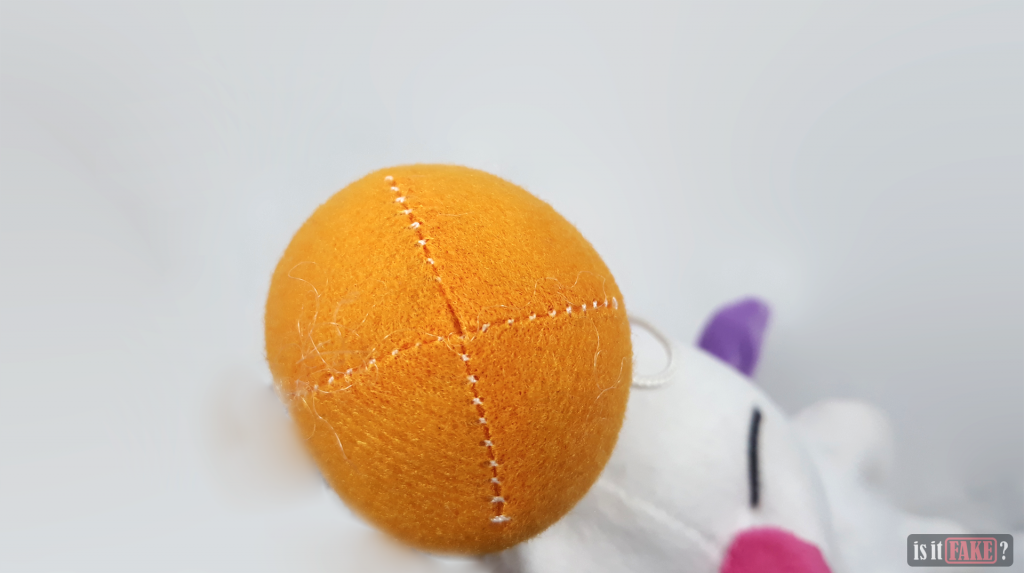 The whole Moogle plush doll is definitely an oddball. And speaking of oddballs, its pom-pom is a whole lot of awful mess. In most cases, a Moogle’s pom-pom is perfectly round and puffy. The stitching on this fake plush’s pom-pom, however, is terrible as you can see a crumpled area. Overall, the pom-pom is tangibly elastic as well as the string connecting to the plush’s head, but the shape is terribly warped.

Nevertheless, the fake Moogle plush is far off from being the real one. In fact, it could be just a factory reject which unknowingly made its way out to the shady market. But if you are aware how the real Mascot Moogle plush doll looks like, then you’ll be able to tell a whole lot of difference between the two. Fake VS Real of both plushies

As you can see, the real Mascot Moogle plush is also a hang-up plush doll. Indeed, the item showcases a lo-fi version of the Moogle plush although you’ll be able to notice that it’s amply stuffed and perfectly shaped. Unlike the fake plush, you could say that the real Moogle plush is pumped up with a bit of nutrition.

Aside from its shape, the volume of fur is truly lofty. The feet and hands are also lengthy which gives the plush an animated look. The pom-pom on the real plush is also worth mentioning as it adds to the whole plush’s adorable meter.

Nevertheless, you’ll be surprised to how the fake Moogle plush is priced compared to the real one.

If you look at both of the prices, you’ll realize that the fake Moogle plush isn’t worth spending your $9 bucks on. The fake just lacks the ‘puff’ factor for the price, and if you’re thinking of buying it still, then you haven’t worried about the shipping charges yet.

For $17.99, you’ll get a guaranteed quality plush which deserves to be displayed in front of your desk, for example. Not only that it’s a beautiful design, but you’ll also carry the flag of a true Final Fantasy fan since it’s an authentic product by Square Enix. Fortunately, Square Enix, from the looks of it, is continuously producing the adorable plush so it’s not that hard to find.

WHERE TO GET A REAL MOOGLE PLUSH

Currently, the exact Mascot Moogle plush can be found the most trusted website you could ever find it. Although the Square Enix website is limited to a number of regions, you’ll be able to pre-order the cute plush for $17.99.

The Final Fantasy Mascot plushes actually has other designs. You’ll be able to collect the set with a Chocobo, Cactuar, and a Tonberry. In the website, it’s scheduled to release on September 2019 though delays may occur for pre-ordered items like for any other websites.

If you’re really eyeing to get the plush quickly, we also found the Mascot Moogle plush in Amiami for around $15.19 in the current currency conversion. This is good news because Amiami, on the other hand, ships their items worldwide so if you’re not in the US, then you can still get yourself a Mascot Moogle plush.

As you can see, you’ll still be able to get the real Mascot Moogle plush for a cheaper price. You’re $6 away from getting a quality plush if you have thought about buying the fake one. Needless to say, bootleg plushes are definitely a nightmare regardless of price.

The fake Moogle plush is an expensive version of the real if you think about it. It has an amateur craft and it’s full of deformity. As a plush, it’s not safe for children as it could reek of hazardous particles. Judging its absence of a proper packaging, it could have gone through dirty places — yuck!

The fake plush is slowly crumbling down as its fur plucks away easily. You could also see the negligent stitching on this item which leads us to decide to give it a 85% awful rating.