Dragons, dinosaurs, huge plant monsters, mutated creatures, and angelic beings. These are just some of the types of creatures you’ll see when you’ve just started to watch Digimon Adventure, or simply, Digimon.

These creatures are basically formed from data and was made from the idea of being virtual pets. In the anime, however, they live in the digital world, a parallel universe of earth, and any second, they could also affect the real world. You’ll find out more about that once you start watching the series.

Dinosaurs are a common sight in the digital world. One of these cute yet ferocious creatures is the little T-rex, Agumon. You can say that Agumon is the face of the Digimon franchise because of its appearance and role in the series. Later on, you’ll find out that he’s one of the strongest as well.

Nevertheless, the franchise is one of the victims of piracy because of its popularity. Specifically, there are many unauthorized Japanese plushies being made from Agumon’s design although these are far from being worthy items.

Our Case Group simply isn’t a good idea for a shop name especially if you’re on a website like AliExpress. There’s nothing more suspicious than a generic vendor who’s selling items that could probably be bootlegs as well. Although there may be legit items in the website, it’s just best to stay away from AliExpress to put your mind at ease when shopping for toy plushes.

It might be unfair to say that many bootlegs come from China, but that’s the reality. However, the country is doing its part to eliminate piracy which also affects foreign investors. After all, only the greedy and lazy ‘businessmen’ are engaging in trading or selling bootlegs.

You’ll get an idea on how to spot fake Digimon plushes by taking a look at this fake Agumon plush strap.

The fake Agumon plush strap was only delivered bare and without any packaging — of course, except for the courier’s plastic bag. 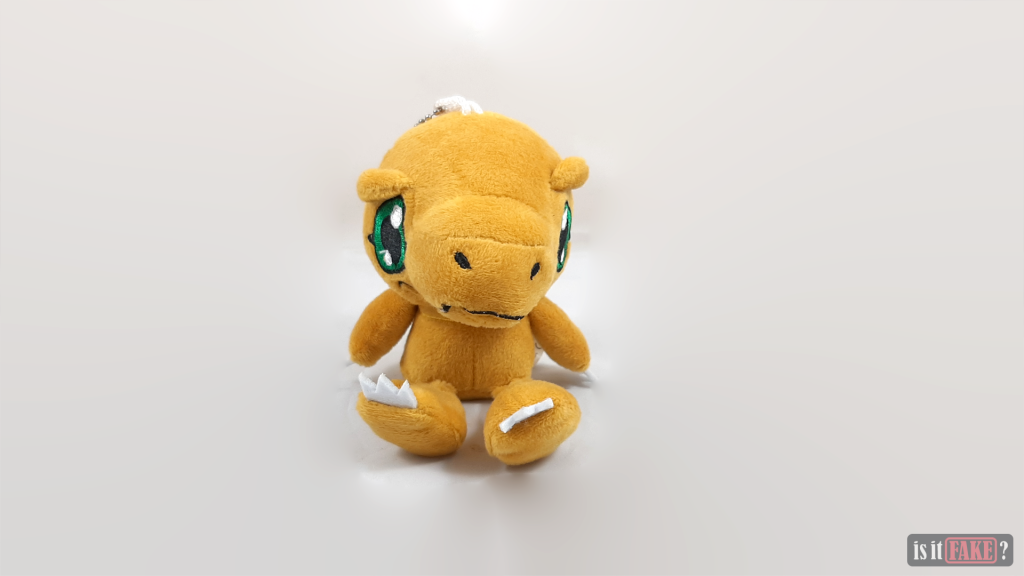 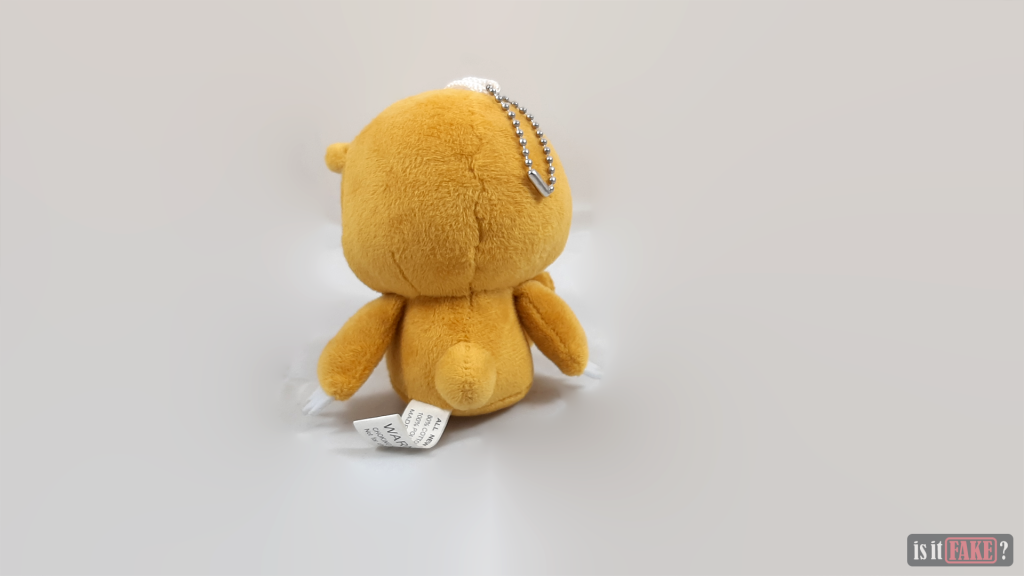 The fake Agumon plush strap - back 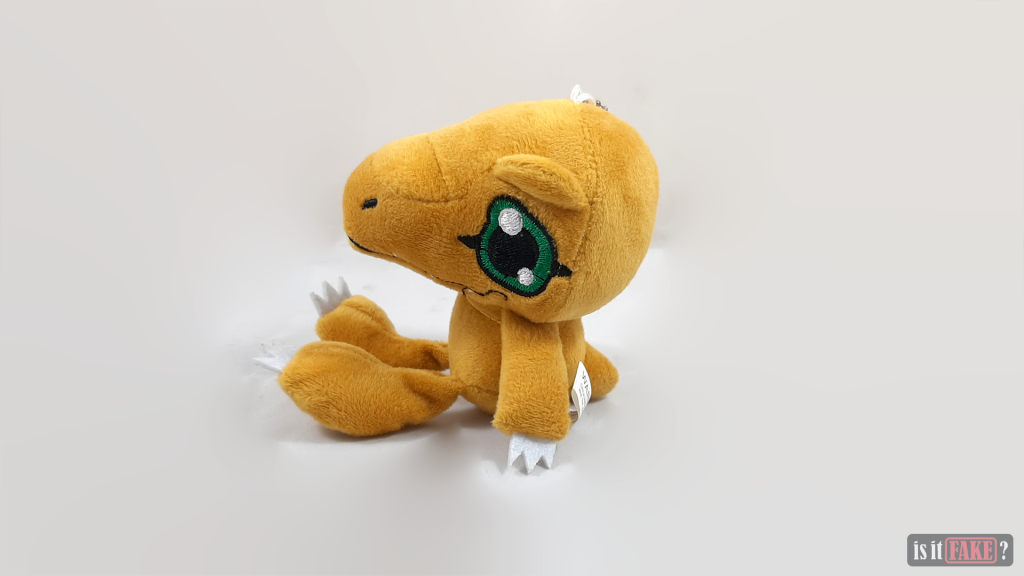 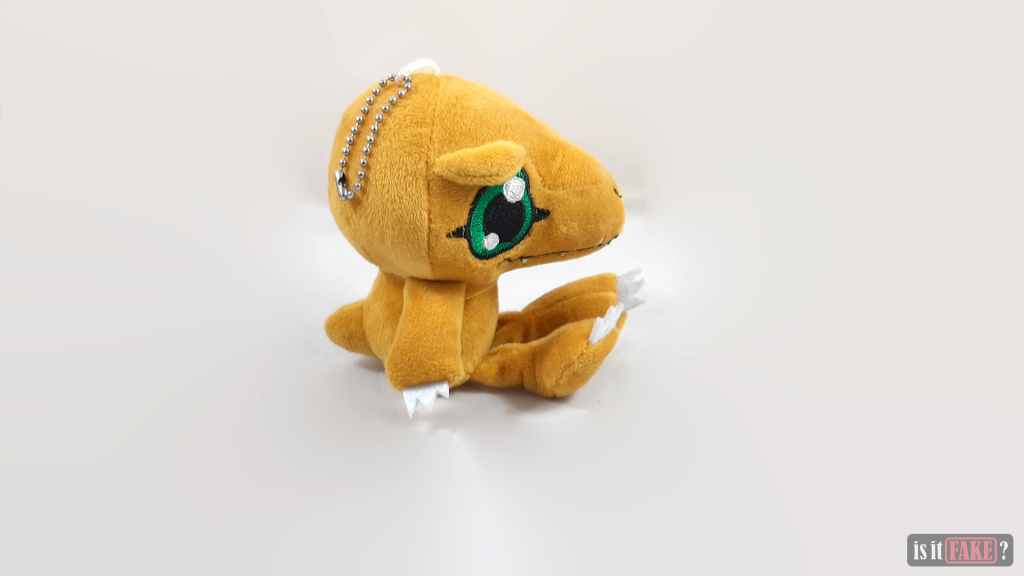 You can already see what’s wrong with the Agumon plush just by looking at it at a fair distance. For one, there are some shape issues with the bootleg, and that’s totally unacceptable.

Arguably, there are authentic plushes that have purposely-distorted designs. However, the amount of sketchiness with the fake Agumon plush is uncanny. You may have to look at it closely so you can tell a lot more about its deceiving appearance. A view of the fake plush's lip The fake plush's head from the left side The fake plush's head from the right side

As for the head, the deformity of the plush starts from the nose. You can see that the area on the left nostril is bumpier than the other side. Apart from that, the mouth indicates that the supposedly adorable digimon is harelip. You could say that the design on this bootleg is really terrible.

A lot has already been said about the head of the fake plush, but that’s only the front part. Viewing it from the side, you can see that the eyes have minor defects with the stitching. There is a loose thread, specifically on the left, which also raises awareness that plushes should initially be in a protective packaging. That is not the case for this fake Agumon plush, however. 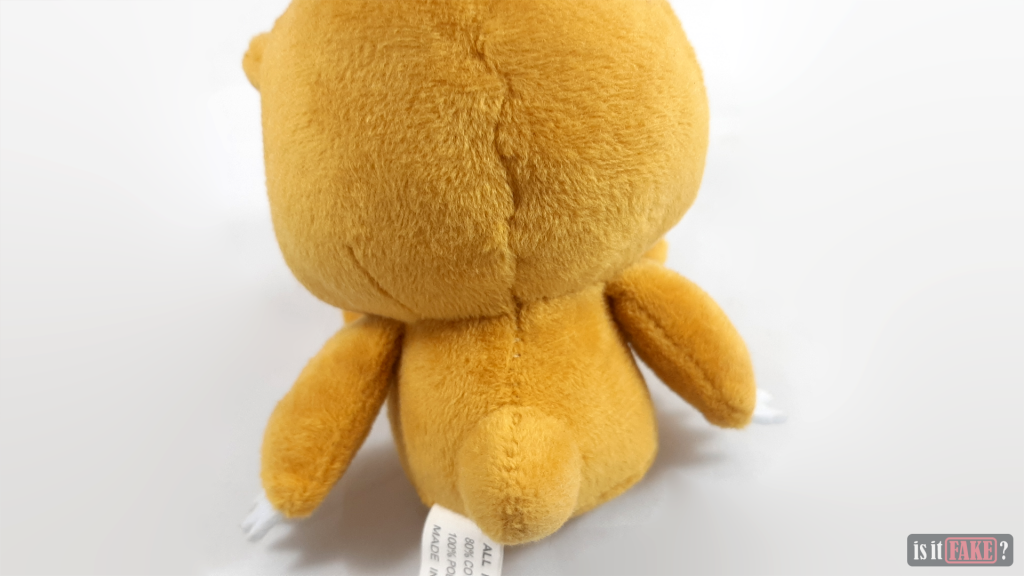 Careless stitching at the back of the fake plush

The body isn’t different from the rest as its also flawed. From what you can see in the images above, you’ll notice a couple of inconsistencies with the stitches and the crooked claws of the plush. There’s a loose thread on the mouth from this point of view as well.

It’s already final. You can already tell that there are some deformed areas of the plush. Bootlegs do this all the time because they couldn’t perfect the shape of a certain plush. As for this Agumon plush, the feet is a lot harder to stomach. The fake plush's body and feet 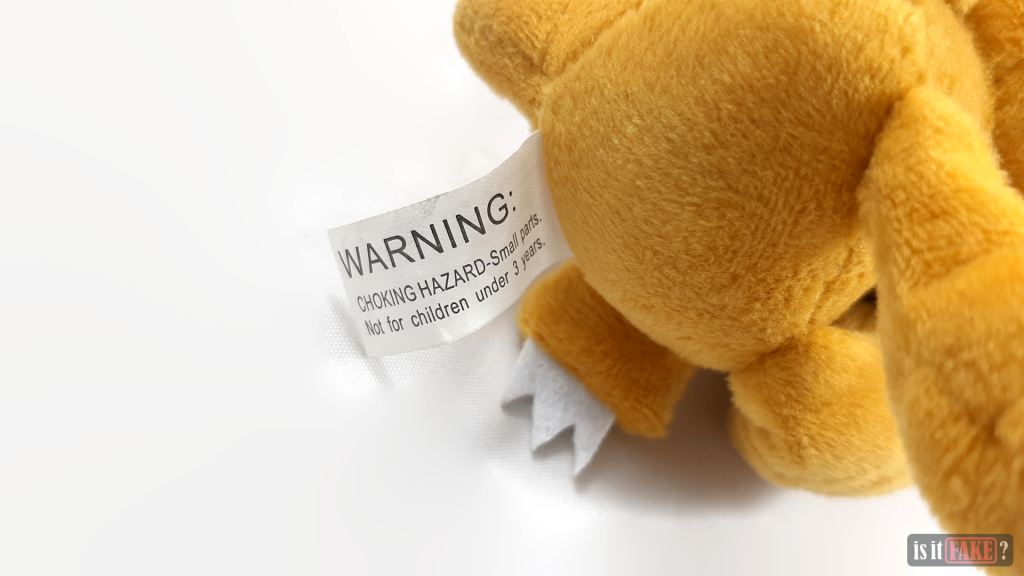 Close up on the other side of the tag

Speaking of a deformed body, the feet looks like the plush has some bone disease, well, in this case, stuffing infection. It’s just weirdly out of shape.

The fake plush’s tag says it’s made from China. It does makes sense since a lot of products are made in China, even authentic items. However, the case of this awful bootleg is the same with many fakes. It doesn’t have a brand. That would give you a hint that the manufacturer of this fake doesn’t have a license to do so. 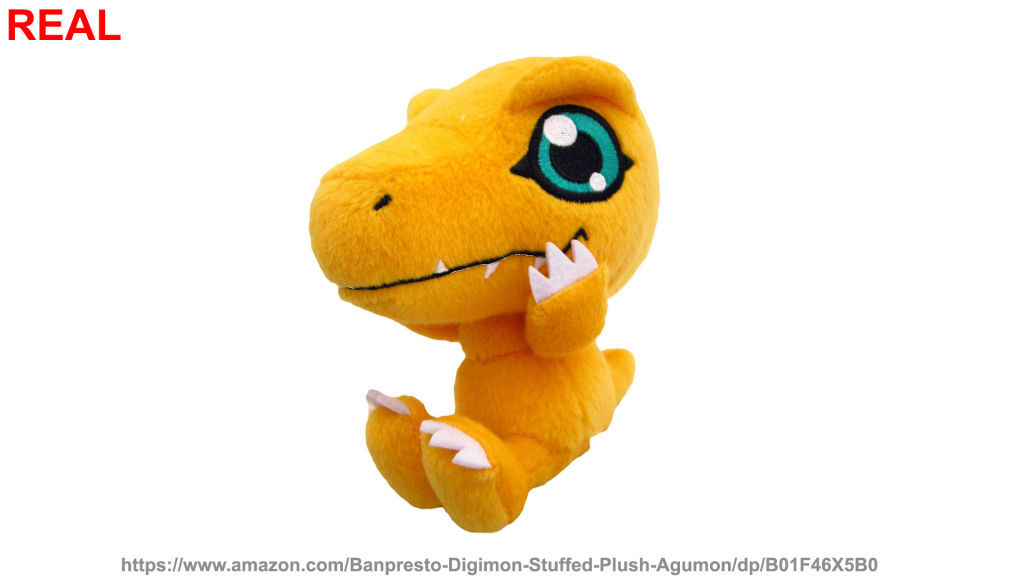 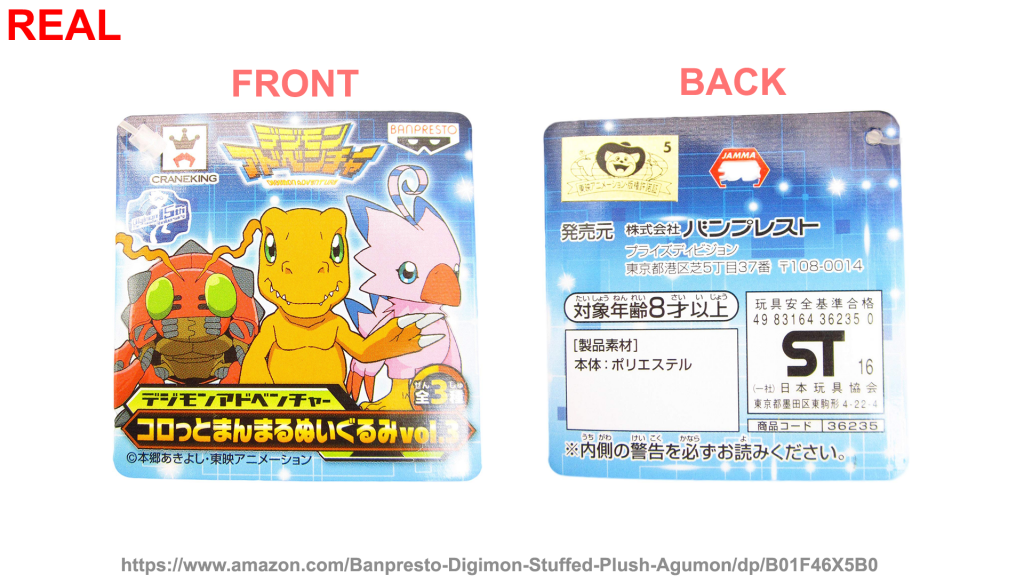 Tag of the real plush strap 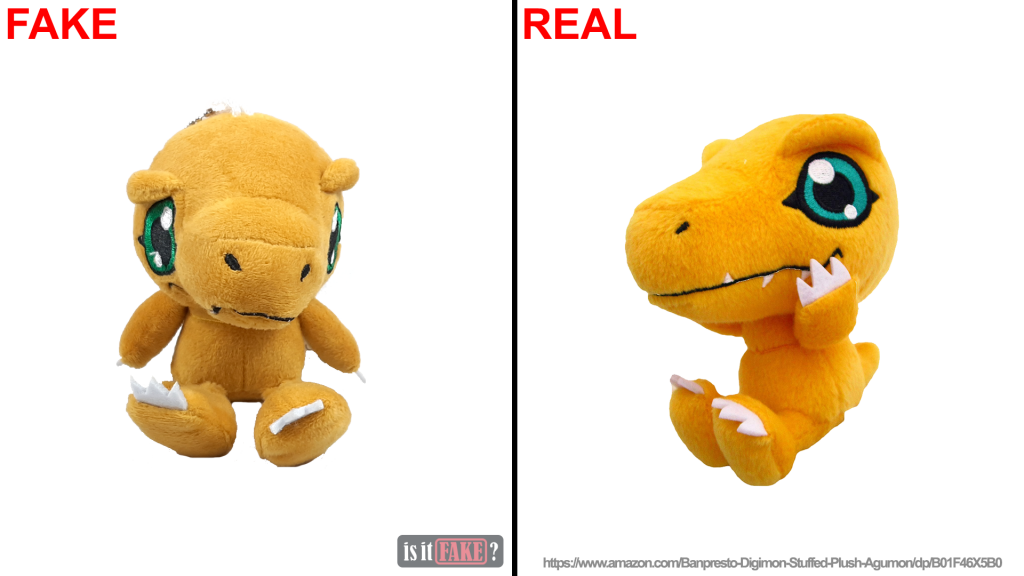 The real Banpresto Agumon plush is definitely outstanding. As you can see, you can compare both of the plush, and the details are on point. You have a vibrant plush plus it has a cute pair of dazzling eyes.

The real plush strap is made by Banpresto. You can see from its tag that it’s licensed by Toei Animation. The texts are also in Japanese since the product is initially sold in Japan, but there are trusted resellers of the product that would make efforts to sell it worldwide.

There’s a huge gap between the prices of both plushes, but the same goes with their quality. Do you even imagine yourself getting a deformed plush? It isn’t even worth hanging anyway.

WHERE TO GET REAL DIGIMON ADVENTURE AGUMON PLUSHES

There are very few online shops that are selling Digimon plush straps, but nevertheless, the items are still popular since physical stores are always a hit in Japan.

Luckily, we found the plush still available on Amazon, however you want to act fast since the it’s indicated that there are only 2 left in stock as of this date. Hopefully, the shop will still replenish the item in the future.

We still have to hold our horses when shopping in Amazon since bootlegs are present in the website. As for this item posting, the item is described as authentic, and we’ve looked on the merchant as well. It looks like that they can be trusted. As always, safety first when doing online shopping — do your best to research!

The fake Agumon plush is a whole lot of mess. It’s deformity doesn’t give justice to its price, and if you think about it, it isn’t even worth the hassle of being ordered online. Color-wise it’s very dull and it doesn’t fill the description of Agumon properly. Who knows? It might just be another generic dinosaur plush that looks similar to the digimon.

Regardless, the bootleg deserves a slam of a 80% terrible rating.